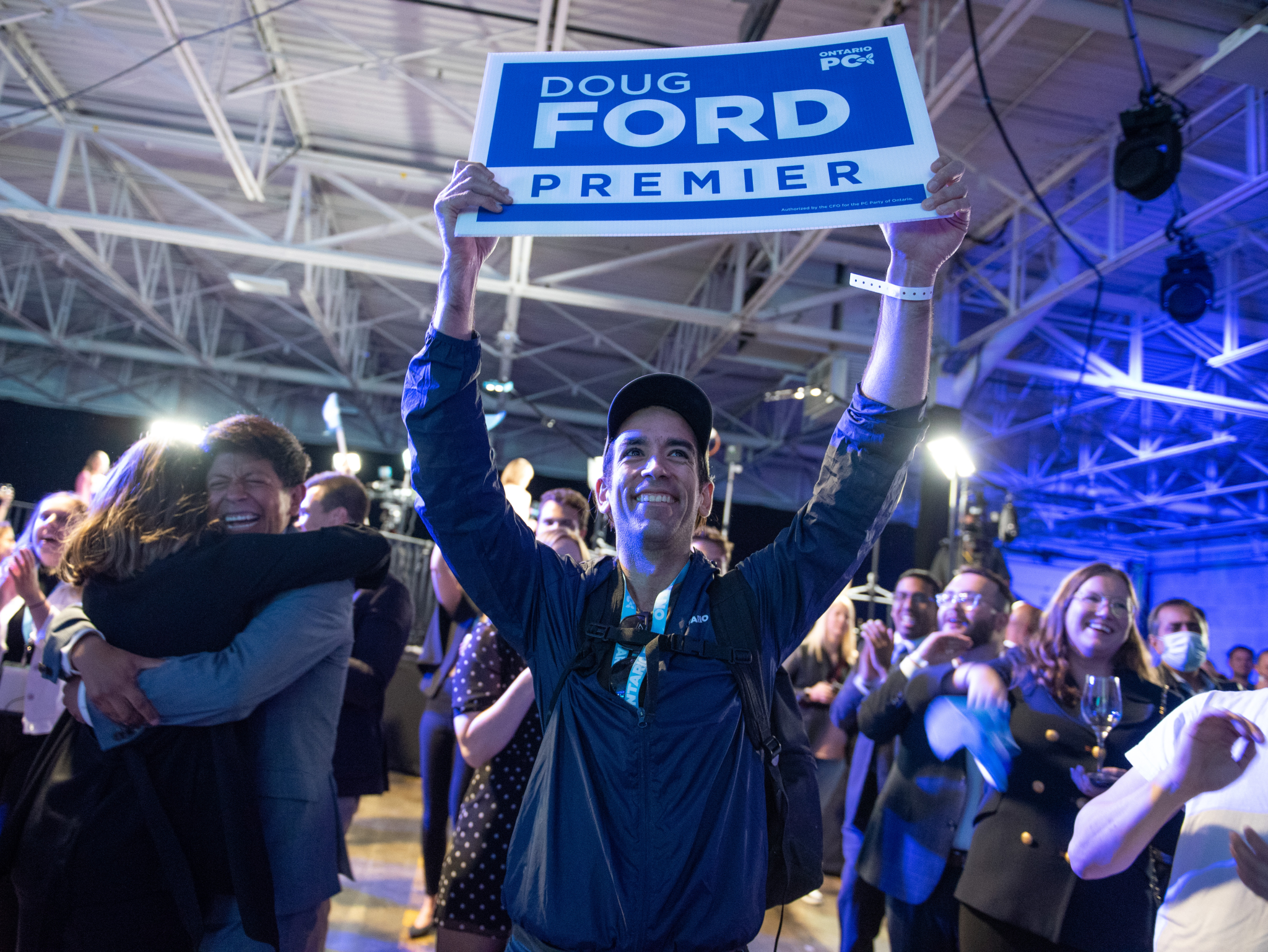 In an utterly predictable and unsurprising turn of events, the Doug Ford led Progressive Conservatives have garnered another majority in Ontario. While pollsters in Ontario can all basically pat themselves on the back for their accuracy, this result is a resounding and utter failure for both the Liberals and the NDP.

Losing the battle for second place to the NDP under Horwath, not regaining party status, and losing his own seat meant that the only viable outcome for Liberal leader Steven Del Duca – who will be best remembered for having all the charm of an inanimate carbon rod – was to step down. The NDP, for its part, should have rid itself of Andrea Horwath after the 2018 election. If you can’t form an NDP government with the literal implosion of the only other mainstream centre-left party, then you need to change course. Both parties now have the opportunity to build themselves from the ground up.

To be fair to both Del Duca and Horwath, however, Ford was always going to be hard to beat. Aside from the lead going into the election, Ford has the benefit of incredible name recognition and has carved out a unique political brand for himself that makes it tough for most other politicians to contend with. Though being hard to beat is not the same as allowing Ford to sheepishly walk into another majority, with a greater seat count than the last election.

Ultimately, both Del Duca and Horwath failed to make the case to Ontarians that the government needed replacing. The sense of urgency from both opposition parties in this election was completely absent. You can’t exactly go out and convince the electorate the government needs replacing if you won’t fervently make the case as to why that is, and it’s not as though the NDP and the Liberals didn’t have an incredibly long list of reasons to choose from.

Ontario kids were kept out of school longer than any other jurisdiction in the country. The Ford government somehow lost track of over $4 billion in COVID relief money and cannot account for where it went. The last four years have also been a perfect test case on how to go to court and continually lose, both in terms of the actual court cases (Ford has lost more than a dozen times), as well as tens of millions of dollars in the process. Ford effectively cut pay for nurses in the middle of a pandemic with Bill 124, and under his watch has allowed the surgical backlog in this province to balloon to well over a million procedures.

Opinion: Doug Ford's resounding victory cost the #Ontario NDP and Liberals their leaders. What comes next? @supriyadwivedi writes for @natobserver

The Liberal and NDP campaigns share the vast majority of the blame here, though it’s also worth noting the Protecting Ontario Elections Act (the Act) was incredibly effective at silencing the various groups of critics who were going to be the most vocal in this election. Teachers, parents of kids who need to access autism services, nurses and other health care workers, concerned parents of school-aged children, environmental groups, and literally anyone else who would’ve had an issue with the Ford government over the last four years effectively saw their freedom of expression curtailed with this piece of legislation.

The Act significantly reduced the ability of third-party groups to advertise in the year-long lead up to an election, as well as during the writ period. The legislation was challenged by the advocacy group Working Families Ontario, alongside three teachers unions. An Ontario Superior Court judge found four sections of the legislation to be in violation of section 2(b) of the Charter – freedom of expression – and that it was not reasonably justified as per section 1 of the Charter.

The Ford government was quick to apply the notwithstanding clause to the sections the judge deemed unconstitutional in order to subsequently push it through the legislature. At the time, the story garnered quite a bit of media attention, so it’s rather odd there has been virtually no talk of the Act’s impact on this election, especially since it was the first time Ontario had ever used the notwithstanding clause to pass legislation that was ruled to be in violation of the Charter of Rights and Freedoms. That is certainly an indictment on the political reporting in this province, but here too, the bulk of the blame rests with the Liberal and NDP campaigns.

You’d think Ford invoking the notwithstanding clause to pass otherwise unconstitutional legislation that infringed upon freedom of expression, with the specific purpose to shut out critics completely from the campaign discourse would be an issue worth raising by the NDP and Liberals. But then you’d be terribly wrong.

You can’t blame an electorate that is facing very real affordability issues like a housing crisis and ongoing inflationary pressures amidst a backdrop of pandemic burnout and exhaustion for not paying closer attention to what was at stake in this election. But you can blame the opposition parties for an utterly lacklustre campaign performance.

Thankfully, they’ve got four years to plan how they’ll do better next time.

It doesn't stop there. If the

It doesn't stop there. If the Ontario Conservative Party has enough votes per riding, others will feel safer to move to the New Blue or Ontario Party.

Vote splitting ignored, I also took the hint that with the Liberals losing official status last time, their remaining voters were still skeptical of left-of-centre politics. So that could be about 70% of voters who opted for conservatism.

"Voter turnout fell to 43.54%. That means the current “majority” government is supported by 17.78% of eligible voters."

That's exactly it: we have a broken electoral system which makes a mockery of a true democratic political process, one where all parties have a voice in crafting solutions for all, not just those supporting the winner-take-all party! Truly hopeless & disgraceful!

Without naming the utter

Without naming the utter failure of first past the post electoral politics, A, Valentin spells out the remedy - PROPORTIONAL REPRESENTATION. Check out Fair Vote Canada if you want to live in an actual democracy.

I grow weary of reading the

I grow weary of reading the media not speaking truths to generate "clicks" and "eyeballs". What exactly was resounding? Did Doug Ford's leadership suddenly cause thousands of non-voters rush out to the polls and vote? Did he smash through the magical 50% of ballots cast to have a legitimate majority?
No, and no.
So what's resounding? 300,000 less people voted for Ford. Is that what you mean by resounding?

Mike Schreiner should move from the disappointing Green Party to head up the needy NDP. We need a smart engaging person to engage us, and he is just the ticket.

The bottom line for left-of

The bottom line for left-of-centre political parties has for years been that right-of-centre media organizations set the agenda of what is newsworthy. They simply will not talk very much about the things that right wing governments are screwing up, and to the extent that they cannot ignore those things, they will refuse to frame them in a way which allows the truth, that the problems are caused by right wing policies, to be expressed very effectively. They will give left-of-centre parties just enough airtime to make it possible for them to claim they give them airtime. Overall, they define the "Overton Window" in such a way as to disallow genuinely left wing policies, the kind that are intuitively appealing to people because they will help a lot of people directly, from being conveyed.

Left-of-centre political parties have responded by saying wimpy things that the right-of-centre media are somewhat willing to put out there . . . the problem being that those wimpy things aren't really much use to anybody so they can't build support with them. And similarly, to gain media acceptance they say the wimpy things in a wimpy way. If right wing leaders talk trash the media accepts it as just being "folksy" and "saying it like it is" (even if they're flat out lying). But if left wing leaders talk tough, the media considers them unhinged lunatics. So left wing political leadership end up censoring themselves. Kind of like the difference between reactions to men talking tough and women talking tough. Jack Layton had an odd knack for saying things in such a way that they were appealing and not wimpy, but sort of hypnotizing the media into thinking it was OK because he was so darn cheerful about it. But this is not a trick most people can pull off.

Accepting the rules of this uneven playing field, the left cannot generally win. I think that ultimately, if the left wants to get anywhere, it needs to largely ignore the mainstream media. Oh, sure, give them your message. But when it comes to actually crafting the policies and messages--fuck the Overton Window, to hell with what the media will want to publicize. Come up with strong populist policies that will really make a difference--so for instance, say you're thinking about policy on cell phones. Don't say wimpy stuff like "strengthen the CRTC so it regulates them a bit". Say "Nationalize the bastards, cut cell phone rates drastically, and make basic internet a free public service". Or at least "Break them up into a couple of dozen smaller companies that will have to actually compete, and make mergers illegal."
Or on housing "We will not muck around trying to subsidize the private sector to try to get them to make the affordable homes that they always turn out not to make after they take the money. Our government will directly build so much cheap housing that private sector refusal to make anything except luxury condos will be irrelevant."
Or on family doctors--a provincial party could say "We're going to establish public clinics where general practitioners are paid a salary instead of operating a small business. These clinics will have testing facilities attached, as well as nutritionists, physiotherapists and whatever else is needed to make the clinic mainly a one-stop place. We will place them everywhere there is a need, we'll spend what it takes, and we'll put all the services involved under the public umbrella so they are free. To support this model, we're going to seriously increase the number of doctors we train, and as a stopgap we're going to break down barriers to certification for immigrant doctors. Enough with doctors driving taxis when we need them in clinics!"
Then get your message out via social media, direct email and all that stuff. Build communities which will back you because you plan to make real, serious differences to their lives. Sure, send it to the mainstream media, but consider any coverage a bonus. There may be attacks in the mainstream media; use those the way the right does, as "look, the elites hate us" fuel. It should work BETTER for the left--the elites actually DO hate us. And if you're challenged, like in a debate or by ambush journalists, do what right-wingers do: Don't back down, don't apologize, double down and get in their face. And make sure you have video of it and get that out on social media claiming you totally owned whoever gave you trouble.