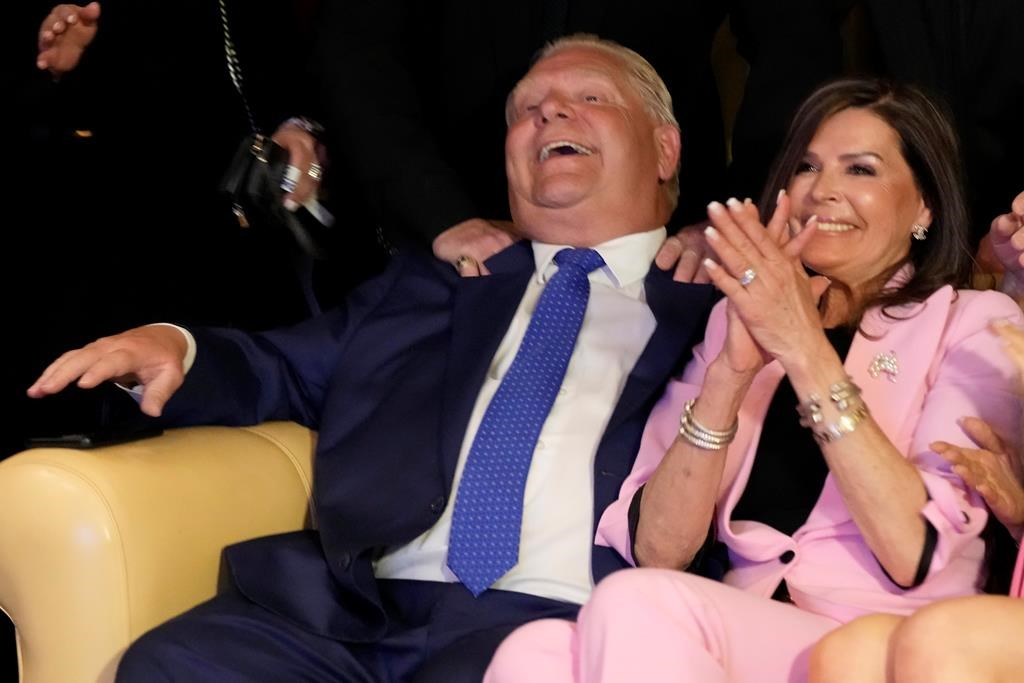 TORONTO — Doug Ford and the Progressive Conservatives sailed to a second majority government Thursday, kept afloat by an electorate unenthusiastic about change, and a decidedly safer, less flashy campaign than when he burst onto the Ontario political scene four years ago.

This campaign lacked the pizzazz and bombast of 2018, with buck-a-beer promises traded for more staid infrastructure plans.

Promises of new highways and hospitals centered Ford’s “get it done” pitch, seeking to turn the page on the pandemic by building the economy, though his budget-turned-platform didn’t contain much else in the way of new pledges for the next four years.

The Progressive Conservatives were elected or leading in 80 of the province's 124 ridings about half an hour after most polls closed, well beyond the 63 required for a majority and ahead of the 76 they won the last time.

Voters hoping to avoid another Progressive Conservative government failed to rally behind either the NDP or the Liberals to produce a presumptive challenger to Ford.

Polls at the beginning of the campaign told much the same story as at the end, with both parties jockeying for a couple of percentage points here and there, far back from the Progressive Conservatives.

The NDP was poised to form official Opposition again, leading or elected in 28 seats, the second highest number, though well back from the Progressive Conservatives and well behind their 2018 result.

In that election the party nearly doubled its seat count, winning 40 seats. It could be the last election as NDP leader for Andrea Horwath, who made a fourth run for the premier's office.

Liberal Leader Steven Del Duca lost his own riding of Vaughan-Woodbridge, but he has vowed for forge ahead regardless of the result there.

Del Duca was chosen in March 2020 as the new leader for a party looking to rebuild itself after being reduced in 2018 from a majority government to holding just seven seats, not enough for official party status.

The Liberals were elected or leading in nine seats in preliminary results, still short of the 12 required for official party status in the legislature.

Independent candidate Bobbi Ann Brady was leading in Haldimand-Norfolk with half of the polls reporting, ahead of the Progressive Conservatives.

Voting was extended at 27 polling stations in 19 ridings and counting can't begin in those districts until their polls are closed.

A source with knowledge of the vote counting told The Canadian Press the extensions are happening for several reasons, including some polling stations opening late, and others having to move locations because of technical issues as well as power outages.

Elections Ontario has said more than one million people voted in advance polls last month and also has noted a sharp rise in mail-in ballots requested compared with the 2018 election.

Voting kits were mailed to 126,135 eligible voters this time around, up from 15,202 ballots last election.

With election looming, Ontario food banks ask politicians to put them out of business