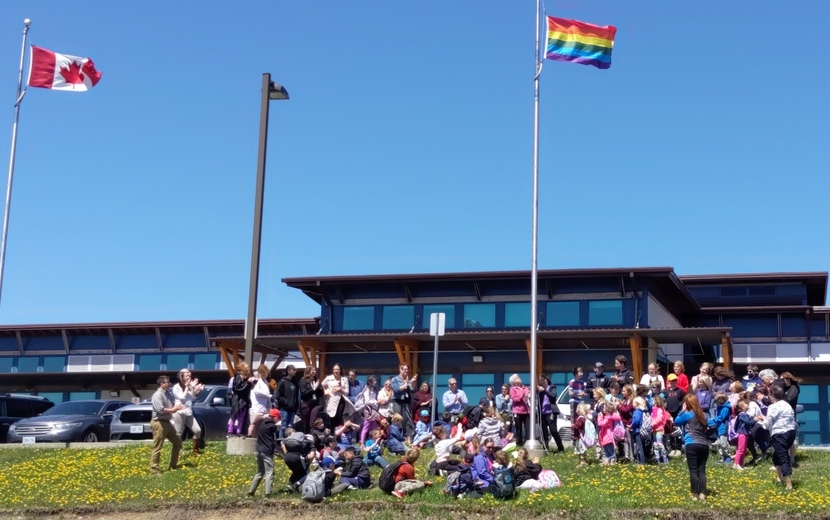 The Pride flag, a symbol of the LGBTQ+ community and its fight for equal rights, is flying over Catholic schools in at least three more Ontario school boards this year, as efforts to increase inclusion in the province’s religious education system gather pace.

Catholic school boards in Halton and Hamilton-Wentworth, as well as in one of the province’s most remote boards (north of Lake Superior) joined a string of other district boards that made the historic move last year despite the opposition of conservative trustees.

Catholic teachings say members of the LGBTQ+ community must be treated with dignity and respect, but the Vatican says sexual relations between people of the same sex are a sin.

“The act of flying the Pride flag is an acknowledgment that we are all distinctive but have the same dignity in the eyes of God,” the Superior North Catholic District School Board said as Pride Month kicked off earlier this week.

That message has not been universally accepted in the province’s Catholic education system, however, with some clergy and community members adamantly opposed to the Pride flag moves.

The Halton Catholic District School Board had last year voted against flying the flag after a tumultuous board meeting. All nine of its schools soon after expressed support for LGBTQ+ students.

Kirsten Kelly, who was a student trustee pushing for the change in Halton last year, said the reversal of its opposition this year was largely due to students and others raising their voices in whatever forums were available to them.

“I believe that if it weren't for the initiative and activism from students, parents, staff, and community members, we would not be where we are today,” they told Canada’s National Observer.

“The student voice reached the board in many ways — from social media outreach, to sending letters of correspondence, delegations, and signed letters from student councils” advocating for the raising of the flag and other policies to make sure LGBTQ+ students feel safer, Kelly said.

Advocates are now actively campaigning against the re-election of trustees who opposed the measure and other progressive policy efforts.

#Catholic school boards in Halton and Hamilton are flying #Pride flags over their schools and other buildings for the first time this month, a victory for LGBTQ+ advocates after strenuous opposition from some trustees.

"For the upcoming election in October, we are committed to working to help elect forward-thinking candidates who are focused on student achievement, well-being, and safety," said Alex Power, a representative of the group Halton Parents for Change. "We vehemently reject candidates who come to the table with alternate, right-wing agendas, as we have seen numerous times this past term."

The Hamilton-Wentworth Catholic District School Board also raised the Pride flag over its schools for the first time this year after its board voted 6-3 in favour of a motion to do so in March.

It did not explicitly acknowledge the start of Pride Month, but said in a statement earlier this week that bullying or rejection based on race, religion, sexual orientation, gender, gender identity, appearance, economic status, ability or any other reason would never be tolerated in its schools and board buildings.