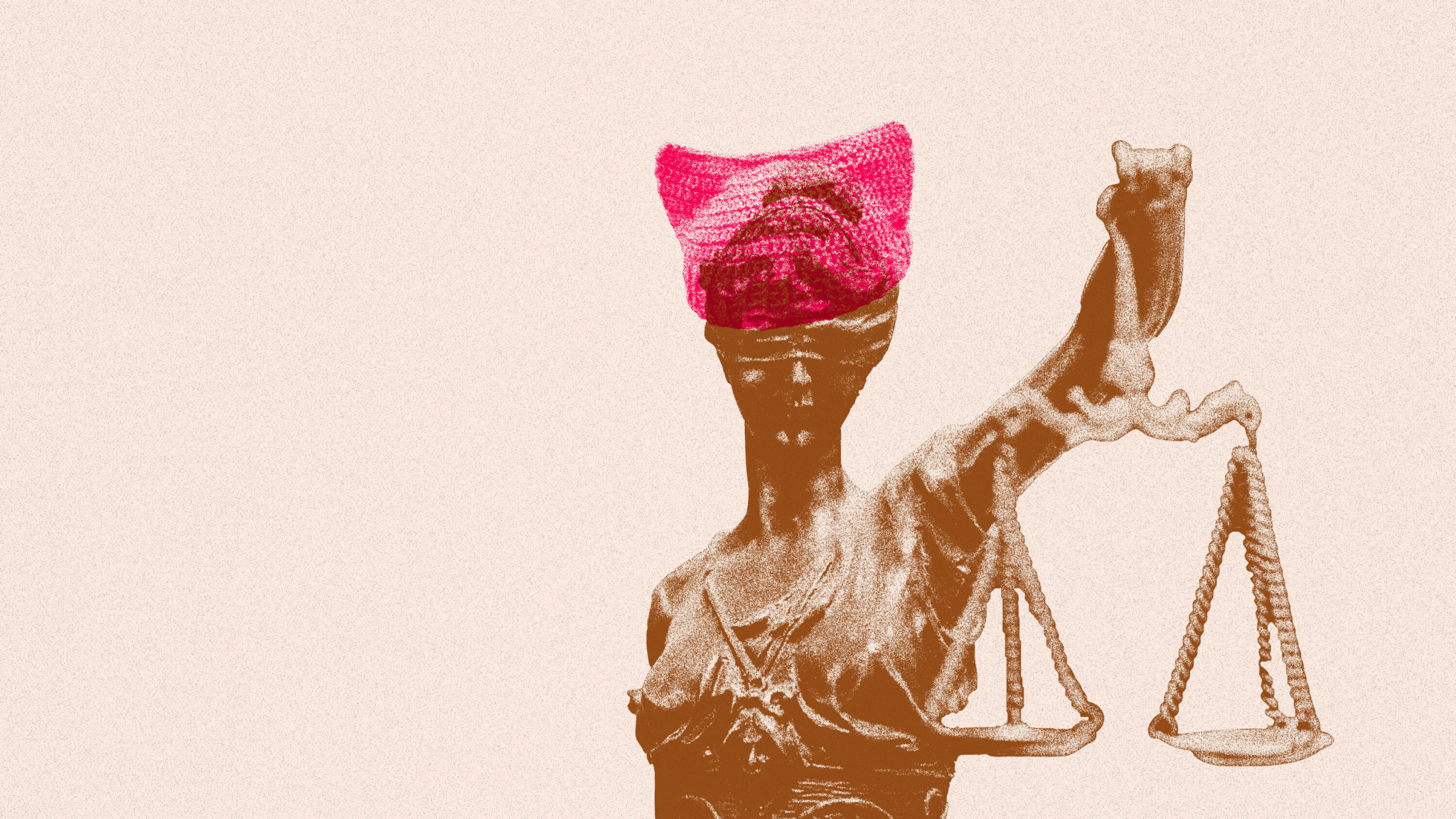 The U.S. Supreme Court officially reversed Roe v. Wade on Friday, declaring that the constitutional right to abortion upheld for nearly a half century, no longer exists. Illustration by Ata Ojani
Previous story
Next story

I had an abortion in 1976 when I was 20 years old and a sophomore at Northwestern University in Evanston, Ill., It was less than three years after the passage of Roe v. Wade.

The young nurse at the university clinic talked with me cheerfully about the option of having a baby. She sat me down and painted an upbeat picture of me carrying a baby in a pack on my back along with me to classes. In her imaginary vision, I could manage it easily and happily. But I didn’t think I could and neither did my boyfriend, who was in the third year of completing a PhD and looking forward to a summer internship at a major hospital.

His response to our accidental pregnancy was: “Someday this will make us very happy, but not now." I agreed. That’s how we thought about ourselves and our lives — we had everything ahead of us and a sense of control, including choosing when to be parents.

We drove to the abortion clinic in his old convertible sports car with the top pushed down and he sat in the waiting room while kind nurses stood at my side, holding my hand, and a doctor performed the abortion.

Then came a second abortion two years later, and that one sent me spiralling emotionally. I had just moved to Nashville and getting an abortion there was not, trust me, an uplifting experience. Why were the doctors and nurses not making eye contact with me? Why did no one hold my hand during the procedure? Was I just imagining it or did they think I was going to hell for making this choice?

I’ll never know, but it was an awful experience. Still, in light of what women face now, it was nothing to complain about.

There were times I regretted those abortions. But when I had my two sons, I stopped thinking about the pregnancies I had terminated.

Years later I married my second husband and added two more children to my family; my life evolved alongside babies, toddlers and young people. I had even worked with a baby strapped to my back, not so different from that cheerful picture the nurse once painted. My children are at the core of everything good about my life. Thanks to Roe v. Wade, I had choices when having kids at the centre of my life wasn’t a great idea. When I began my journey as a parent, I was ready.

In fact, I owe my happiness today to the freedom and choices I had the right to make. Thanks to Roe v. Wade, I was able to continue my education, graduate and go on to an interesting job. As of today, the choice is no longer available for too many and I feel so angry. The impact on many American women will be profound as they tackle university. Some teenagers will never make it to their high school graduations.

“Today’s ruling will have widespread implications, including within the higher education community,” Kathleen McCartney, president of Smith College, a women’s college in Massachusetts, wrote in a letter to the university community. “While the right to choose will remain legal in Massachusetts and much of New England, restrictions in other states will limit some students’ access to reproductive health services, thereby negatively affecting education access and graduation rates for pregnant students and potentially their partners. Further, the health — and mental health — of some students may suffer as a direct result of this ruling.”

The economic consequences will be felt across socioeconomic groups and communities.

“Research in the years since Roe v. Wade became law has shown that access to abortion increased the probability that young women finished college by nearly 20 percentage points and entered a professional occupation by nearly 40 percentage points; it also found that teen motherhood was reduced by 34 per cent and teen marriage by 20 per cent,” McCartney noted.

Blunter words came from actor Halle Berry on Twitter: “I’m outraged! What the Supreme Court has done is BULLSHIT. Something has to be done! Guns have more rights than women.” 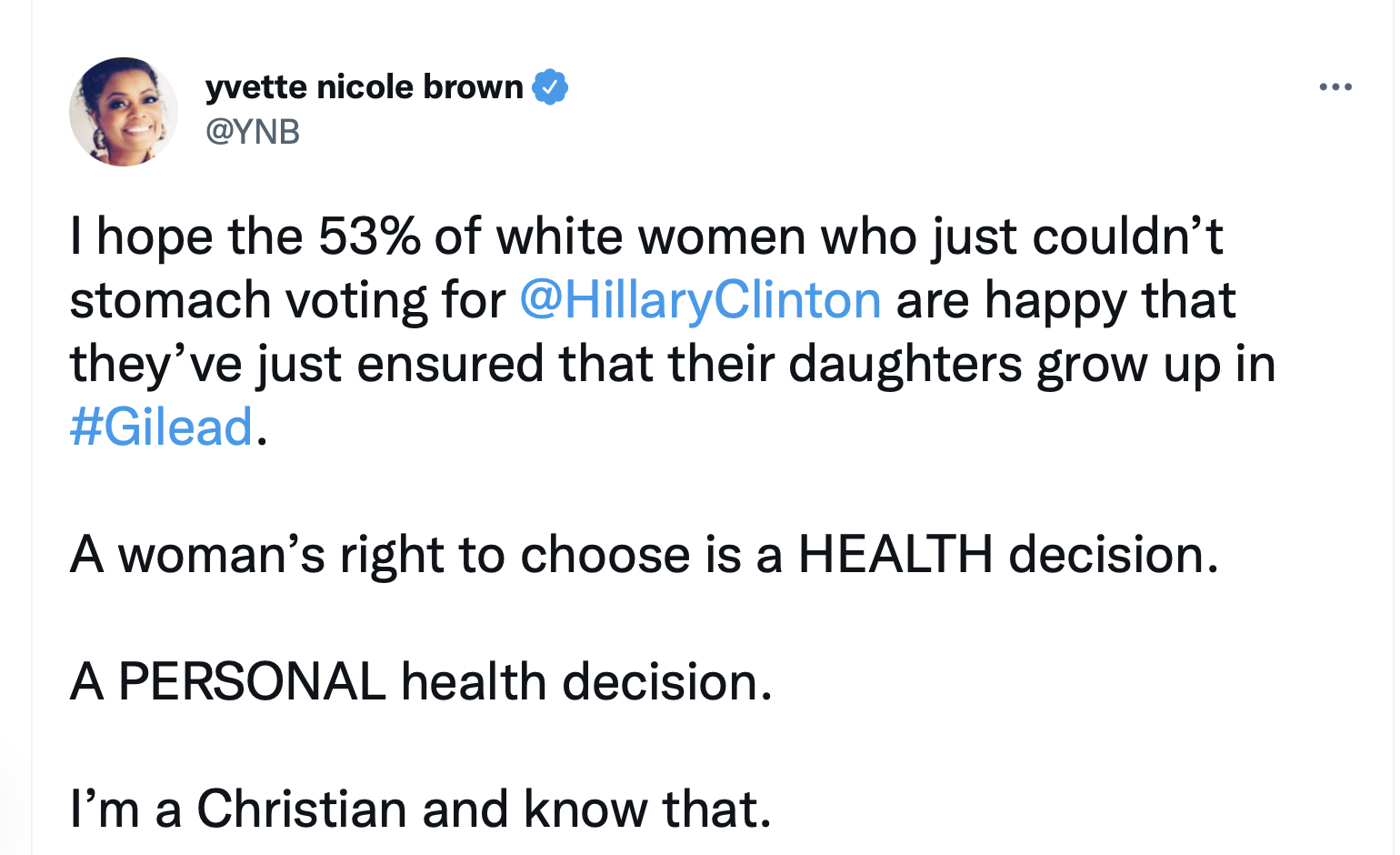 Voting out the Republicans and voting in progressives is the only possible way out of this nightmare. Americans should punish Republicans severely in the midterms. Congress should follow up by smacking SCOTUS down and lifting America up with federal legislation to make choice a woman’s right again.

The Constitution of the United States says that “all men are … endowed by their Creator with certain unalienable Rights, that among these are Life, Liberty and the pursuit of Happiness...” It won’t be long before the Clarence Thomases of the world start reading that literally and tell us that “the founders” did not mean for unalienable rights to extend to women. I can hardly believe we’re even talking about this.

But, as Shonda Rhimes wrote earlier today: “This is actually happening.”

I think the most essential

I think the most essential thing to understand is that when you speculate that those nurses looked at you as if you were an evil person who was "going to hell," you were probably right; they were likely Christian "traditionalists," just like Clarence Thomas is an "originalist" when it comes to their constitution which far too many Americans see as being divinely ordained! I heard that stated at the current congressional hearings by a teary-eyed witness, and no one batted an eye except to struggle with their own emotions. These are perfect examples of "true believers." America has become a huge cult detached from reality, as religions always are.
Looking at Thomas again (and why in hell is he even still ON the Supreme Court btw, truly?) righteously quoting the Declaration of Independence as if it was his god speaking about the "rights" of men, it's striking in its absence of women even being mentioned, but that does line up with Eve in the bible does it not? And this "God" WAS male after all, so Christianity is a patriarchal doctrine, like all religions. It's like a group of men created the whole thing, and ultimately for their own benefit!?
Amy Klobuchar astutely offered perspective this week when she pointed out that women obviously weren't the only thing not mentioned in 1776 (or in 1789 when the constitution was drafted), and there has been much evolution in society on many fronts, including the rule of law, particularly when it comes to human rights (slavery?) But the full enabling of religion further enables its followers to claim this originalist stance of purity, thereby "trumping" the rule of law as well, even at the highest level because an alternate reality VERY problematically also offers a concomitant alternate AUTHORITY.
My point is that religion now has democracy and modernity backed into a corner in the most powerful country in the world, and it's probably going to be like Putin in that it won't stop there because megalomania is behind it, and it's also conceivable that the feminist movement has fuelled the backlash this whole time.
If Jerry Seinfeld is right (and I'd say he is, as a mature woman and mother of sons) that most men are "low-level superheroes in their own minds," which speaks to the otherworldly male ego generally, then religious men (men are so competitive) go for the gusto of the ultimate power by considering themselves as low-level GODS. Proxy gods. Talk about superheroes. No wonder women were first to be put soundly BACK in their rightful place of subservience to such awesomeness. Women always get the shit end of the stick in religion. In Islam they're lucky to be able to continue showing their faces....
There really needs to be some serious pushback on the mass delusion that is religion; we're all in the corner as a species because believers also disproportionately don't believe in science, including climate change. That's part of their man-made doctrine too, dominionism, which is about man dominating nature, perceived as the iconic feminine as in "Mother Nature." But it tells the tale, and as my ten year old granddaughter says, "why do men think they're better than women when they COME from them?"
Talk about putting things in their place. It's the only thing that makes sense if we're bent on restoring what is the most important and sacred thing of all, which is truth.

We recently finished watching the latest season of 'The Handmaid's Tale' and commented that the entire series seemed to fit like a glove around Trump's presidency, which in turn gave permission for extremists to release their chaos on the USA. Today, with this decision's terrible assault on women's rights mostly by a tiny clique of powerful conservative men, Gilead seems to be just around the corner. Let's hope the majority of the 53% of the US population who are women remember this event in the upcoming midterm elections.

I am in favour of abortion

I am in favour of abortion rights for women and do not think that men should have the right to make such decisions for women however I believe that abortion should be the last choice. If you are going to be sexually active then you should be mature enough to chose to use birth control. Abortion is not a good birth control choice. I worked as a medical laboratory professional at a time when abortion was illegal. One evening I was called to ER to take blood cultures and other blood work on two women who had had illegal abortions. They were at the opposite ends of the income spectrum; one well to do the other a working class wife. The working class wife was extremely ill and her husband was frantic. He begged me to tell him she would be okay but I had never then or since felt anyone so hot to the touch. Needless to say she died during the night, the other women was also very sick and needed dialysis. I never want another woman to go through what those two women and their families did. However birth control was available at that time and I still think abortion should be a last resort but it is every individual woman’s choice and men should not be able to legislate away women’s right to make decisions about their own bodies. We are NOT possessions.

“I think this is a perfect

“I think this is a perfect decision for the 18th century.”

You may know that they're

You may know that they're making the last season of "The Handmaid's Tale" which should come out before the midterms but certainly isn't as relevant when truth has become so much stranger than fiction. These evil, conservative psychos have underestimated the depth of emotion, how steeped it is, and yet also current. Normal young women are completely outraged at this, aghast really, kind of how we all are at Putin (another conservative psycho) right now, which is a powerful motivator to vote. So many younger people are generally disengaged from politics, especially in the States, thinking of it as mainly a shallow game but because this brings it into their every day life big time, it's a major heads-up that could actually strengthen democracy.
How many men get involved with this will be telling as to how far we have actually advanced as a society with all our supposed interest in human rights.