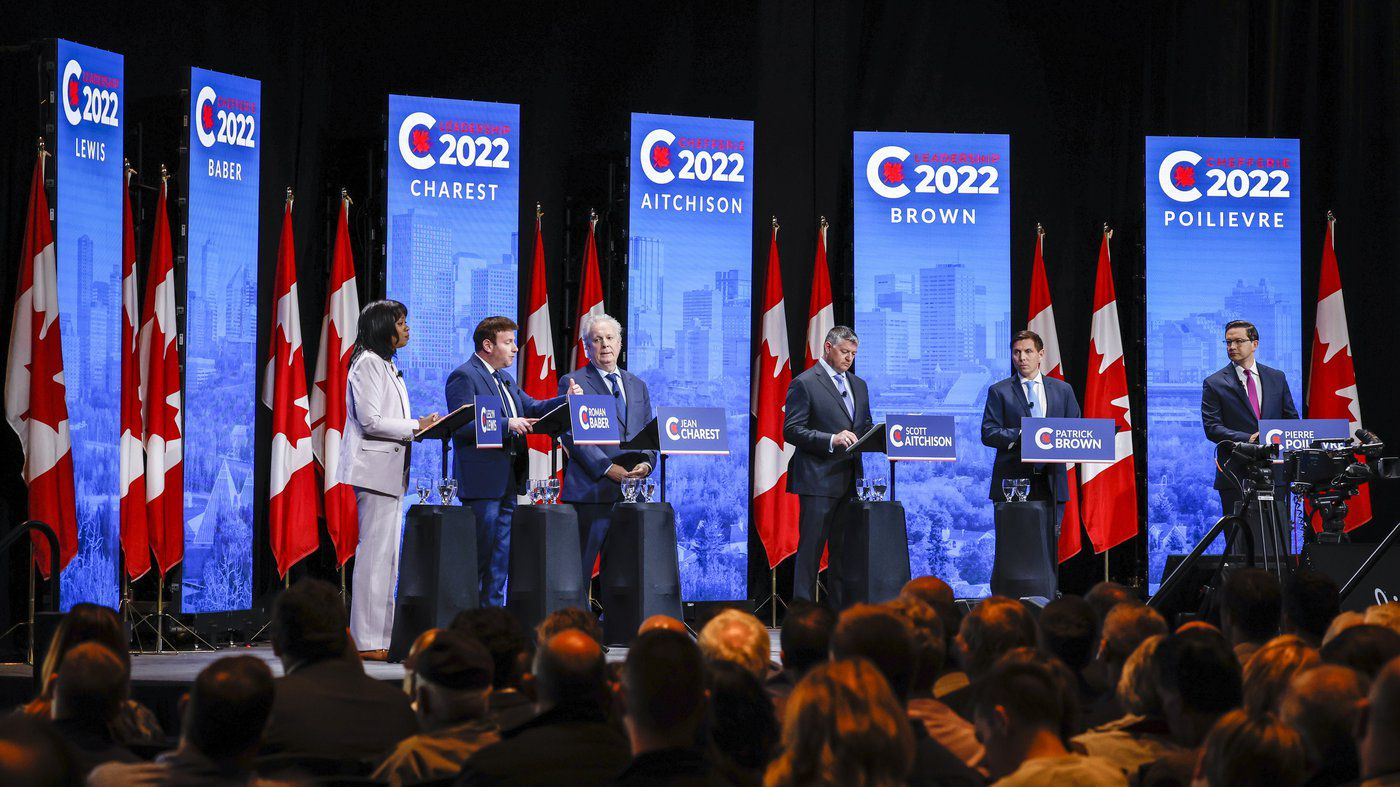 The Conservative Party of Canada's plan to host a third leadership debate in August may be crumbling, with one candidate refusing to attend and another mulling whether it's really necessary.

The campaign for perceived front-runner Pierre Poilievre announced Thursday the longtime MP won't take part in the debate, facing the consequence of a hefty fine.

Jenni Byrne, a senior member of Poilievre's team, released a scathing statement on Twitter explaining his decision after the party announced earlier in the day it would proceed with a debate in early August.

"Participation is mandatory and no substitution will be permitted," according to the rules.

Byrne's statement noted Poilievre took part in the first two official debates in May, plus one put on by the Canada Strong and Free Network — an organization that promotes the conservative movement.

It also slammed the English-language debate held in Edmonton because it featured sound effects and a series of questions about the candidates' taste in music and television.

"It was not the campaign's fault that the party's Edmonton debate was widely recognized as an embarrassment … candidates were given Ping-Pong paddles to hold up when they wanted to speak. It was more of a game show than a debate," the statement read.

"And it happened despite strong cautions to the party about both the moderator and format — all of which were ignored."

A request for comment from Clark has not yet been returned.

Party spokesman Yaroslav Baran said he understands "there are multiple views on the debates held to date," and highlighted that race rules say attendance is mandatory.

Byrne's statement said the plan for another debate comes as the Poilievre campaign works to get out the vote among Conservative members. The MP boasts he sold nearly 312,000 memberships — a figure party headquarters won't verify. That's more than the total number of members the party had when Erin O'Toole was made leader in 2020.

The party has said a record number of people — about 675,000 — signed up for memberships ahead of the vote.

Members have until the beginning of September to return their ballots before the results are unveiled in Ottawa on Sept. 10. Voting is already underway, with most of the ballots having been mailed out.

Poilievre's campaign goes on to attack fellow leadership candidate Jean Charest's repeated calls for a third debate, saying the ex-Quebec premier couldn't draw the same crowd sizes as Poilievre during the spring when candidates were selling memberships to supporters.

"That is why he wants another debate — to use Pierre's popularity with members to bring out an audience he can't get on his own."

In response, Charest's campaign accused Poilievre of preferring to craft messages on social media "than answer questions in real time."

"Jean has NEVER shied away from answering tough questions," it reads, adding it felt the format of the French-language debate held in Laval, Que., was constructive.

Leslyn Lewis, a social conservative MP from Ontario who is also in the running, said party members had a chance to see leadership candidates present their visions for the country in the two earlier debates, which remain online.

"I am not sure what value we are giving to members through a hastily schedule debate at this time," she said in a statement.

Like Poilievre, Lewis underscored it's an important stage of the race for candidates to meet members and says she has a jam-packed schedule of events.

"I have found that the concerns of everyday Canadians vary greatly from the high-level political questions we get asked during official debates," she said.

"The issues facing rural Canadians have not been represented in the debates held."

As for whether she plans on participating, her campaign says it is in discussions with the party.

Besides Charest, candidates Scott Aitchison, a rural Ontario MP, and Roman Baber, a former Ontario legislator, had also expressed hope for another debate.

Poilievre's decision to skip the event means there will be not one, but at least two fewer candidates on stage, given the recent disqualification of Patrick Brown over an allegation he may have breached federal elections laws.

Brown has denied that accusation.

It is also not the first time during the race that planning for a debate has been sidelined.

Poilievre declined to participate in an unofficial one while candidates were at the Calgary Stampede.

The Independent Press Gallery, a organization that represents various media outlets and journalists, also announced it had to cancel a debate it had been planning because not enough candidates confirmed they would attend.

The party's leadership election organizing committee says it decided on Wednesday evening to go ahead with a third official debate after surveying members last week. Some 24,000 responded.

"The response was overwhelmingly in favour," Baran said.

Although officials and campaigns have just weeks to plan for the event, campaigns were informed earlier in the race that their candidates could be called back for a debate in early August at the party's discretion.

This report by The Canadian Press was first published July 21, 2022.