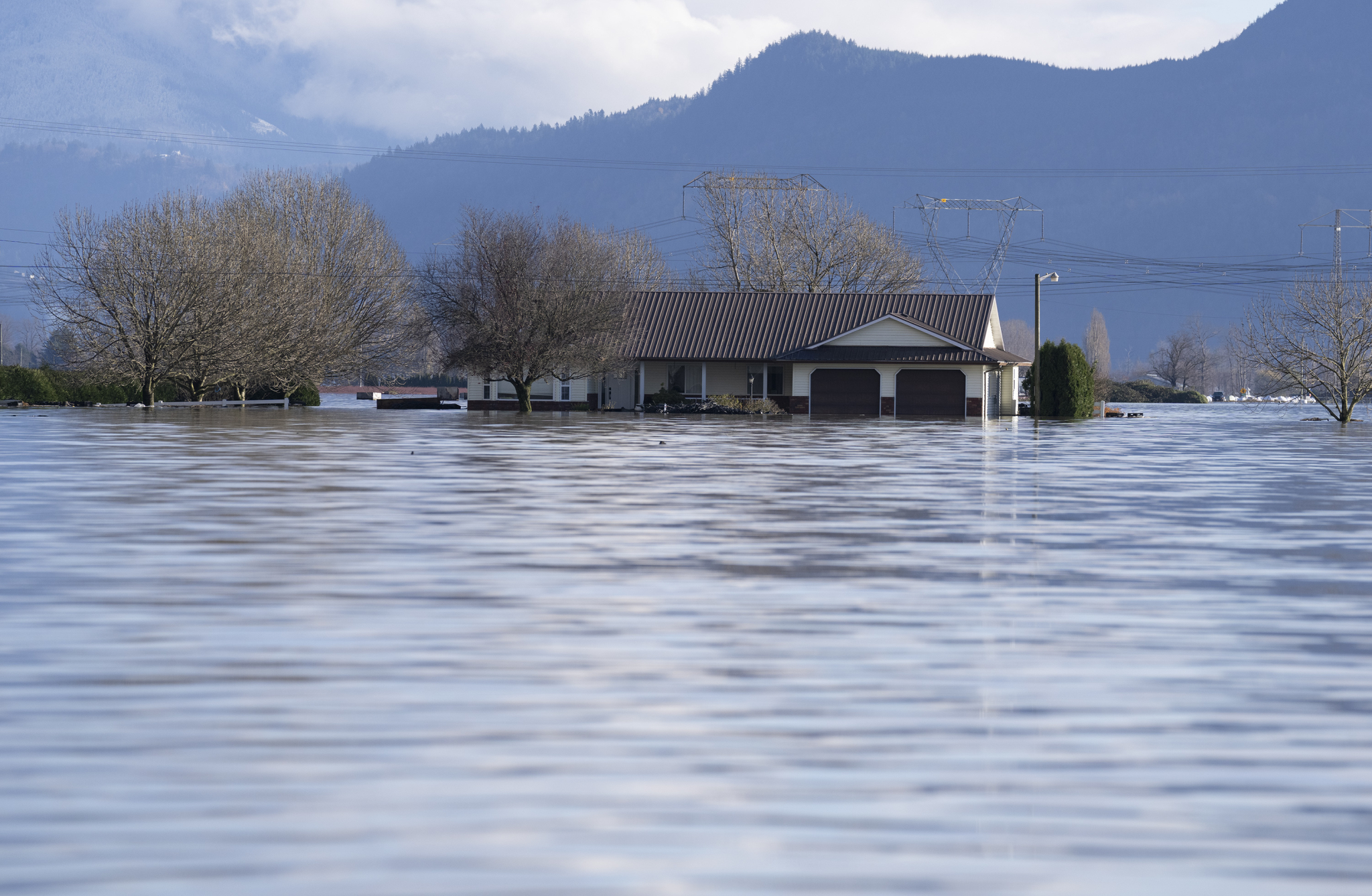 A home is surrounded by floodwaters caused by heavy rains and mudslides throughout Sumas Prairie near Chilliwack, B.C., Friday, Nov. 19, 2021. THE CANADIAN PRESS/Jonathan Hayward
Previous story

Vancouverites were taken aback last week at the news that city council, in a divided vote, passed a motion by Green Party Coun. Adriane Carr to allocate up to $700,000 towards a class action lawsuit against fossil fuel companies.

This measure was instantly slammed as a performative stunt and window dressing for the enviro vote as we head into election season.

While the councillors are probably wholly genuine in their intentions, and many coastal American cities have already launched similar actions, this motion was premature. When announcing plans for a massive, precedent-setting, game-changing lawsuit against one of the world’s most powerful adversaries, show that you’re ready. And don’t do it alone.

This might be too much to ask, but when elected officials roll out big climate initiatives, could they please be ready to comprehensively frame issues for the public?

Because I couldn’t be happier to support this concept, but see no signs that we’re really in this fight. And you don’t bring a pea-shooter to a gunfight with Big Oil.

Still, there are a lot of reasons why suing the oil and gas industry is a very good idea for municipal governments, and here are just a few of them.

Almost 75 per cent of Canadians live in large urban centres, so when climate disaster strikes, it’s mainly city hall that takes the call.

While we associate climate change with summer events like deadly heat waves, wildfires and drought, the most frequent and costly impact we experience comes from severe storms and flooding of our sewer and stormwater systems. For coastal cities, that risk is compounded by sea-level rise and king tides that can present a nearly insuperable infrastructure challenge.

Opinion: This might be too much to ask, but when elected officials roll out big climate initiatives, could they please be ready to comprehensively frame issues for the public? writes columnist @Garossino for @NatObserver.

Managing all this will cost cold, hard cash — and mountains of it. Insurance only goes so far, and then the taxpayer becomes the insurer of last resort.

What’s coming our way is going to hurt.

And why, you might ask, should the fossil fuel industry pay?

We are 15 to 20 years behind where we could and should be on climate action. Even today, as Europe burns, some holdouts regurgitate the same tired denialism they’ve been fed since the 1980s: “The science isn’t settled.”

Big Oil wrote that story, and paid to have it told everywhere for decades. By “experts” who they found and made famous.

For almost 20 years, no independent scientific organization of national or international status, no major university, no meteorological or oceanic science organization, no physical, chemical, or Earth sciences organization has dissented from the Intergovernmental Panel on Climate Change’s conclusions on human-caused climate change.

But the public hasn’t heard that. For decades, almost every media report on climate change and devastation included some contrarian oddball dredged up from somewhere to misrepresent the known science.

That’s not a coincidence.

Thirty years ago, US Democrats & Republicans were on the same page when it came to climate change. Within 15 years, it had become - and remains - the most politically polarized issue in the country. How? The result of deliberate and strategic investment in doubt to delay action. https://t.co/N3DeS4Etud

Despite knowing their strategy would intensify catastrophic weather events and add astronomic public expenditures, industry deliberately misled the public. They did so to build opposition to climate action that would hurt their business.

And they were extremely successful. Taking action on climate change is the most politically polarized issue in American politics today.

A BBC report aired Sunday in the U.K. found an alliance of oil, coal, auto, utilities, steel, and rail industries developed a calculated PR strategy. Over several years, their team searched out obscure climate skeptics, framed them as experts, and paid them to give speeches, write op-eds, and go on media tours of radio and TV stations.

It worked. By the time of the Kyoto Protocol, according to the BBC, up to 44 per cent of the American public believed scientists were divided about climate change. Those doubts translated to votes that blocked effective climate action.

“I think it is, in many ways, the most serious crime of the post-World War Two era, anywhere in the world. The consequences of what they've done are just almost unimaginable,” said former vice-president Al Gore about the campaign.

The costs of future climate-caused cleanup, repairs, and refits will be astronomical, and we have no idea what they are. None. Coun. Carr says that Vancouver is now spending roughly $50 million annually, but this is nowhere close to the real number. We’re just getting started.

The city’s engineering department issued a 2020 report warning that damage repairs and upgrades to our sewer and rainwater infrastructure alone will cost the city billions by 2050.

Yet Andy Yan, director of the SFU City Program, says to meet the scale of future climate change impacts, we can’t just retrofit and upgrade existing infrastructure. The challenges are too overwhelming. We need to rebuild it.

“It’s not just the water in front of you, says Yan, “it’s the water below you.” This affects water tables, soil stability, infrastructure integrity, and building foundations across the whole Metro Vancouver region.

Every assumption underpinning the entire water management system — from drinking water to sewage to stormwater management — has to be recalculated. But Vancouver can’t do this in isolation. Water management for the entire Metro region is a complex network involving multiple governments, geographies, and tidal and effluvial zones.

Asked about a ballpark rebuild number, Yan says nobody even knows, but it would be massive. “It wouldn’t surprise me to see a number in the hundreds of billions,” he says. “The City of Vancouver can’t do this by themselves, period.”

There’s the rub. There’s no way we can even contemplate suing for compensation without establishing the magnitude of needs and co-ordinating with the entire region.

That Vancouver councillors just rolled out the concept of a class action suit without showing buy-in from regional partners or even the semblance of a plan should give pause to even the most ardent environmentalist.

Still, there’s a silver lining. These lawsuits may be novel in Canada, but almost two dozen largely coastal cities, counties and states already have them under way in the U.S. New York City, Washington, D.C., San Francisco, Honolulu, Baltimore, and many others are seeking compensation for the costs they are already incurring from climate change.

It’s taken them years to get this far, and they’re still in pre-trial wrangling, but these actions will function at least as a rough guidepost for what coastal cities can expect to achieve.

In many ways, this litigation parallels the states’ landmark lawsuits against Big Tobacco, which settled for almost $250 billion in 1998. There could potentially be an overwhelming exposure for industry here.

Not only might there be compensation for damages already sustained for disaster cleanup and infrastructure repairs, there’s the additional cost of building future systemic resilience.

But let’s have no illusions. Major litigation against global corporate giants is no cakewalk. It will be hardball, brutal and expensive. It should only be undertaken with a true understanding of the risk of loss, the magnitude of future climate demands, a plan to meet them, and committed partners willing to join the fight.

We’re not there yet. But we can be one day.

So, should Vancouver sue the fossil fuel industry for the catastrophic losses the Vancouver public will sustain as a result of their campaign of lies and doubt?

Absolutely. It's the quintessential crime against humanity after all.

This conditional approval by

This conditional approval by Garossino is puzzling. It's not like Vancouver City Council is going to be in charge of this lawsuit. Reputable organizations like West Coast Environmental Law are. Vancouver only agreed to help pay for the action. Hopefully many other municipalities will join in.

I agree, Garossino's take on

I agree, Garossino's take on the tactics is, well, frankly wrong. Vancouver hasn't gone off and started a lawsuit by themselves. Rather, they have given momentum to a movement dedicated to getting many municipalities to do the same thing: Get the money together to mount a class action suit. Someone has to be the first, and if someone is first but never announces it, everyone will think nobody else is doing it.

I would suggest approaching

I would suggest approaching Burnaby council on this. They have first hand experience being stabbed in the back by Big Oil through Trans Mountain Pipeline expansion personnel and lawyers while negotiating permits, then again during quasi legal sessions in the kangaroo court then known as the National Energy (read: Oil) Board. The decision? No permits required from any city. As if that was ever in doubt with a process run by Big Oil apparatchiks. What they didn't anticipate was that the little guy would fight back very effectively with facts and truth in a 39-page affidavit detailing how the entire process was slanted in favour of TMX and the NEB.

Burnaby is also very wealthy and to this day remains opposed to TMX and the expansion of the tank farm and seawater terminal within its jurisdiction. Vancouver and the province joined Burnaby

Next on the To Do list should be a co-ordinated effort by as many cities as possible to go electric, focusing on land transportation across boundaries, in order to speed the transition in Metro Vancouver and all of BC from the oil sands products already flowing in the original TM pipe, stuff that all of us who still own fossil cars currently have no affordable replacements or alternatives, save transit, bikes and the urban walking shoe.

This initiative would parallel the rebuilding of stormwater management infrastructure. Luckily, BC already has the Step Code to regulate much greater energy efficiency in the provincial Building Code. The icing on the cake would be an extensive provincial and federal tranche of grants for energy retrofits in buildings and a long-term funding program for mitigating climate change through urban infrastructure.

The nearly-30 billion dollars going into the gold-plated TMX would otherwise buy heat pumps for every Metro house and commercial building with enough left over to extend the Broadway Subway to UBC, buy 300 electric buses and build out a province-wide high output EV fast charging network.

Vancouver and the province

Vancouver and the province joined Burnaby in the anti TMX suit against the federal backers but of course lost based solely on jurisdictional hegemony, not on the merits of the suit.

But the City of Vancouver and

So you're saying it's exactly

So you're saying it's exactly identical to a carbon tax. Except the governments in question keep the money and use it for useful things. Works for me.