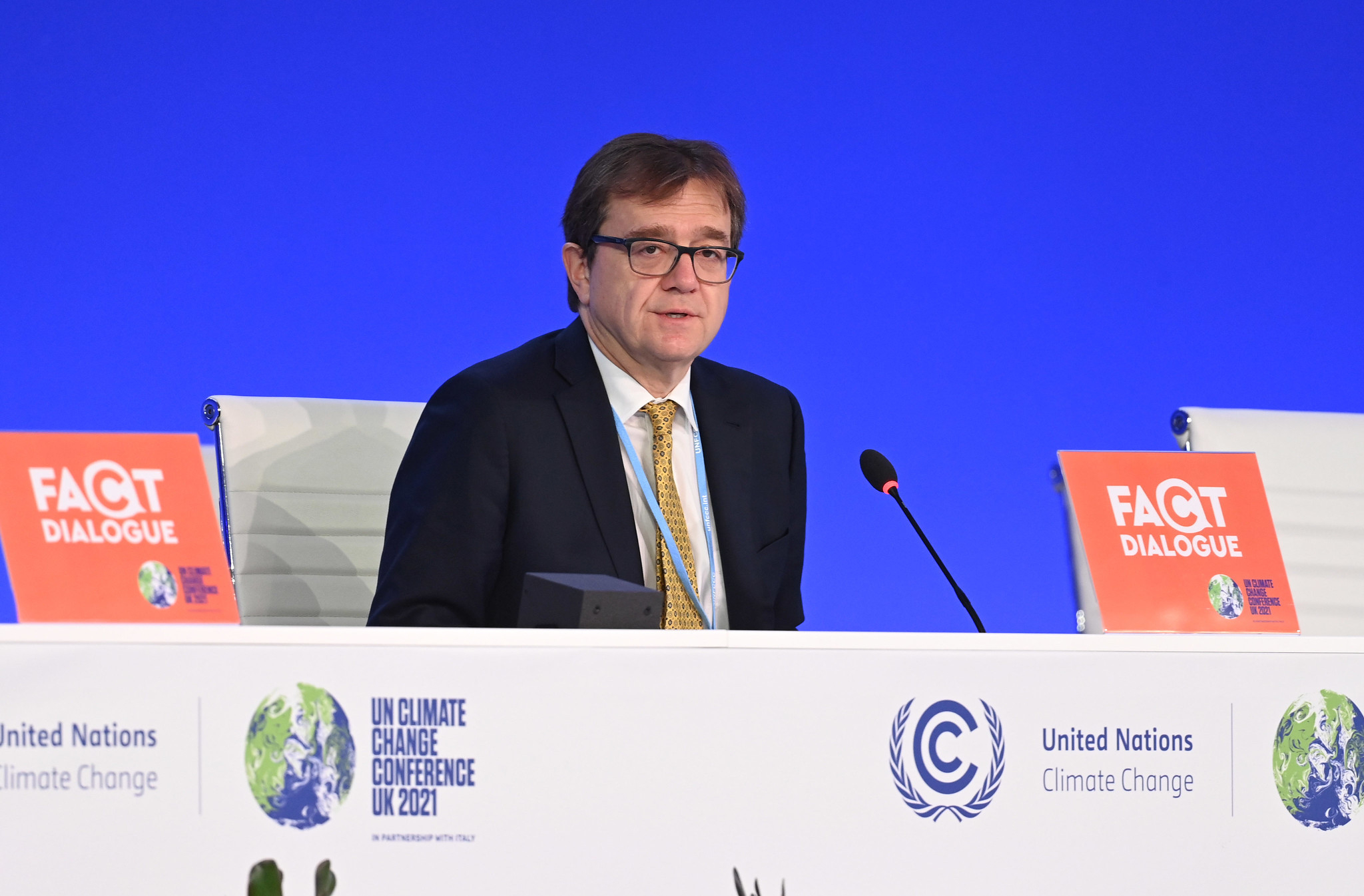 Last November, as diplomats and policymakers convened at the United Nations climate change conference in Scotland, Natural Resources Minister Jonathan Wilkinson and his team promoted Canadian liquified natural gas (LNG) as a major priority, reflected in briefing materials for meetings with Germany, the Netherlands, the European Union and others.

The briefing materials, which Canada’s National Observer received through a federal access-to-information request, spell out objectives, talking points and background context for the meetings and repeatedly cast the Canadian fossil fuel as a solution to European “energy security.”

“Reiterate the ongoing potential role of Canadian natural gas and LNG, highlighted by the current instability in energy markets,” reads one of the objectives in a note prepared for a meeting with German State Secretary Andreas Feicht.

“An LNG export market with Germany would increase energy security while at the same time taking advantage of Canada’s advantages in terms of proximity and ESG [environmental, social and governance] credentials.”

The Netherlands is an important trade hub with a major LNG import terminal and access to a natural gas network across Europe, according to the note. With Dutch gas exports "rapidly declining" as the country phases out one of its own gas fields, the note also suggests European markets could become more reliant on Russian natural gas in the future.

Europe’s reliance on Russia for gas — and the geopolitical consequences that implies — is also referenced in a note prepared for a meeting with European Union commissioner for energy Kadri Simson. That meeting note lists two objectives: “underscore the importance of the EU leadership on implementing climate change measures” and “explore opportunities in the EU for Canadian LNG exports.”

EU countries “are reliant on natural gas from Russia, and LNG imports from the Middle East and the U.S.,” the note says. Meanwhile, “Canada has the potential to become a significant supplier of cleaner LNG.”

“Some countries have expressed concern the construction of (the Nord Stream 2 pipeline) will increase Russia’s capacity to use energy as a tool of influence and coercion and harm Ukraine as a transit,” the note reads.

The Nord Stream natural gas pipelines cross the Baltic Sea, stretching more than 1,200 kilometres to link Russia to Germany. Nord Stream 1 was recently thrust into the news as Russia cut the amount of gas flowing through it, and Germany successfully urged Canada to return a turbine for the pipeline that was in Montreal for maintenance to avoid an even worse energy crisis. Nord Stream 2 was designed to double gas exports to Europe and is fully built. However, it is not in operation because Germany stopped its certification process after Russia formally recognized two regions in Ukraine’s Donbas as independent in the days before the February invasion.

Russian gas exports to Europe have long been a wedge between western allies. Last July, a meeting between former German chancellor Angela Merkel and U.S. President Joe Biden focused on the Nord Stream 2 pipeline, Russia and Ukraine. Germany was in favour of the pipeline because it could fuel the country’s growing economy, while the U.S. was opposed, citing concerns it could be used as leverage over Europe in a conflict. Biden later told reporters he reiterated his concerns to Merkel but that “good friends can disagree… It made more sense to work with the chancellor on finding out how she’d proceed based on whether or not Russia tried to, essentially, blackmail Ukraine in some way.”

Europe using more Russian gas is a driver of the ongoing conflict in Ukraine, says John Foster, author of Oil and World Politics and an international oil economist who spent decades with the World Bank, Petro-Canada and British Petroleum.

As the world’s largest gas producer, the U.S. “wants in on Europe’s huge gas market, displacing Russian gas,” he told Canada’s National Observer over email. However, U.S. gas is more expensive than Russian long-term prices, he said, implying Russia would likely need to be pushed out to make way for North American producers.

“I suspect Canadian gas will also prove more costly than Russian,” he added.

Foster said Canada’s argument “depicting Russian gas to Europe as unreliable is self-serving,” and that “Canada’s emerging promotion of LNG exports from the Maritimes to replace Russian gas in Europe raises the stakes” of the conflict.

Wilkinson was not made available for an interview, but his director of communications, Ian Cameron, told Canada’s National Observer the country was working with allies and the private sector to help Europe reduce its reliance on Russian oil and gas over the short to medium term. Canada and the EU formed a working group in March to discuss ways for Canada to help fill the energy void.

In a speech last month to the Regina & District and Saskatchewan chambers of commerce, Wilkinson called the energy security situation in Europe “potentially devastating” because for Europeans, “this is about a fundamental threat to their ability to provide the basics for their citizens.”

“Not surprisingly, western European countries are working vigorously to secure predictable energy supplies in the context of an increasingly belligerent Russia,” he said. “As part of these efforts, they have asked for help from their friends. And Canada has responded.”

This month, German Chancellor Olaf Scholz is visiting Canada for an expected East Coast energy announcement. Details of the trip are being kept close to the vest, but in recent weeks, Canada has signalled interest in developing an LNG export terminal in Nova Scotia or New Brunswick. An export terminal would cool gas to liquify it before loading it onto ships to transport overseas.

A briefing note prepared for a meeting with German State Secretary Feicht at last year’s UN conference notes the country pledged a US$4.5-billion loan guarantee in principle for the project. German utility Uniper also has an agreement to buy half of the LNG Goldboro produces.

Pieridae originally planned to build the proposed Goldboro terminal on land, but it was later scaled back to a floating barge. Since Russia’s invasion of Ukraine, the company is considering reviving the project on land.

But Europe’s demand for natural gas is set to drop this decade as the EU invests more in renewables and energy efficiency, said Niklas Höhne, climate scientist and professor at Wageningen University.

“Any plans for Canada to build new LNG export facilities and related pipelines would take longer than the few years when Europe's gas demand is expected to drop,” Höhne said in a statement.

A recent poll from Abacus Data found only three in 10 Canadians support a new gas export terminal on the East Coast. That poll, conducted in June, also found 51 per cent of Canadians believe climate impacts should factor into any decision to approve a new export gas terminal, and that Canadians are divided on whether an export terminal would help Europe’s energy needs, with 32 per cent believing it would, while 34 per cent believe it would be “pointless.”

Why not? Putin's invasion of Ukraine gives the O&G industry the political cover it needs to keep supplying the world with fossil fuels.
The O&G industry will seize upon any pretext to expand and lock in future production. It's called disaster capitalism.
Not coincidentally, the Liberal Govt's climate policy is to expand fossil fuel production. An excellent fit.

When the IPCC called for swift climate action, then-Environment Minister McKenna stalled for time:
"We are in a transition. So transitions don't happen overnight."
"The reality is this is a transition that is going to take decades."
"But the reality is people are still using oil and gas. We haven't gotten to the point that there isn't this demand for it."

Trudeau: "Our challenge is to use today's wealth to create tomorrow's opportunity." (2016)
Trudeau (2016): "There is growth to be had in the oilsands. They will be developing more fossil fuels while there's a market for it, while we transition off fossil fuels."
Trudeau (2017): "No country would find 173 billion barrels of oil in the ground and just leave them there."

Canada's Natural Resources Minister Jim Carr: "Our plan is to use this time of transition to Canada's advantage by building the infrastructure to get our resources to global markets and using the revenues to invest in clean forms of energy." (Mar. 15, 2018)
"Canada leads G20 in financing fossil fuels, lags in renewables funding, report says" (CP, 2021)

LNG is not a climate solution

LNG is not a climate solution.
Natural gas burns cleaner than coal, but it's no improvement on the climate front if fugitive emissions exceed a low threshold.
As numerous studies using actual measurements show, methane emissions from O&G operations are far higher than reported.
"'Clean' natural gas is actually the new coal, report says" (CBC)
"New studies have shown there is significantly more fugitive gas than studies showed 5 years ago, and the gas is also a bigger contributor to climate change than was understood."
• https://www.cbc.ca/news/business/lng-climate-investment-1.5192148

LNG exports to Europe and Asia are as likely to sideline renewables as they are to displace coal.
La voilà! Canada's climate emergency response.

Plans to ship LNG from either

Plans to ship LNG from either Nova Scotia or New Brunswick raise a number of questions, beyond the impact on Canada’s climate change goals. The likely source of NG is the Maritimes & Northeast pipeline, so the NG supply would be American. Is that the plan? Is there adequate supply and pipeline capacity? What is the timeline for this project? NLG Canada is scheduled to take seven years from approval of the Final Investment Decision to becoming operational. A similar timeline for this project means shipments starting in 2030. Will European require this source of NG? LNG Canada suggest they will be in operation for 40 years. Is that the case for this project?

All in all, the whole thing

All in all, the whole thing may be moot. Basically, by the time they get the whole show on the road, it'll be obsolete.

That's what passes for

That's what passes for "innovation" in Canada: doing something after everyone else's done it and left it in the dust.

Natural Resources Minister Jonathan Wilkinson and his team promoted Canadian liquified natural gas (LNG) as a major priority. Trust Jonathan to be there to promote this dirty LNG lie that it is cleaner. It may be cleaner to Germany who will just burn it but Canada will suffer insurmountable pollution and water destruction in its extraction and processing. Give it a break Mr Gasman Wilkinson, you work for Canada not the dirty energy corporation. I see your chair on the board of some polluting industry, after you vacate Canadian politics, fully secure already so stop pushing so hard, Canadian are against you and your destructive kind, so wake up and smell the polluted air you caused everyone to breath.

Appalling! Any claim by the

Appalling! Any claim by the Federal Liberals, and Minister Wilkinson especially, to be climate champions, just evaporated. As for Canada's 2015 Paris climate commitments - this volte face brings nothing but shame on Canada and Canadians.

Oh, the *claims* will go on

Oh, the *claims* will go on and on.
Canada has never (ever-ever, ever-ever) been a "climate leader," unless you count the big PR splash in 2015, and Catherine McKenna's breathless explanations as to why she couldn't do anything, despite being the Minister (with the mandate!) in a majority government. Even the government's stated "goals" are climate-loser goals, not climate leader goals.
The very greatest sadness of it all is that there's really no one left to vote for, given that the NDP seems to be poorly educated on the matter.