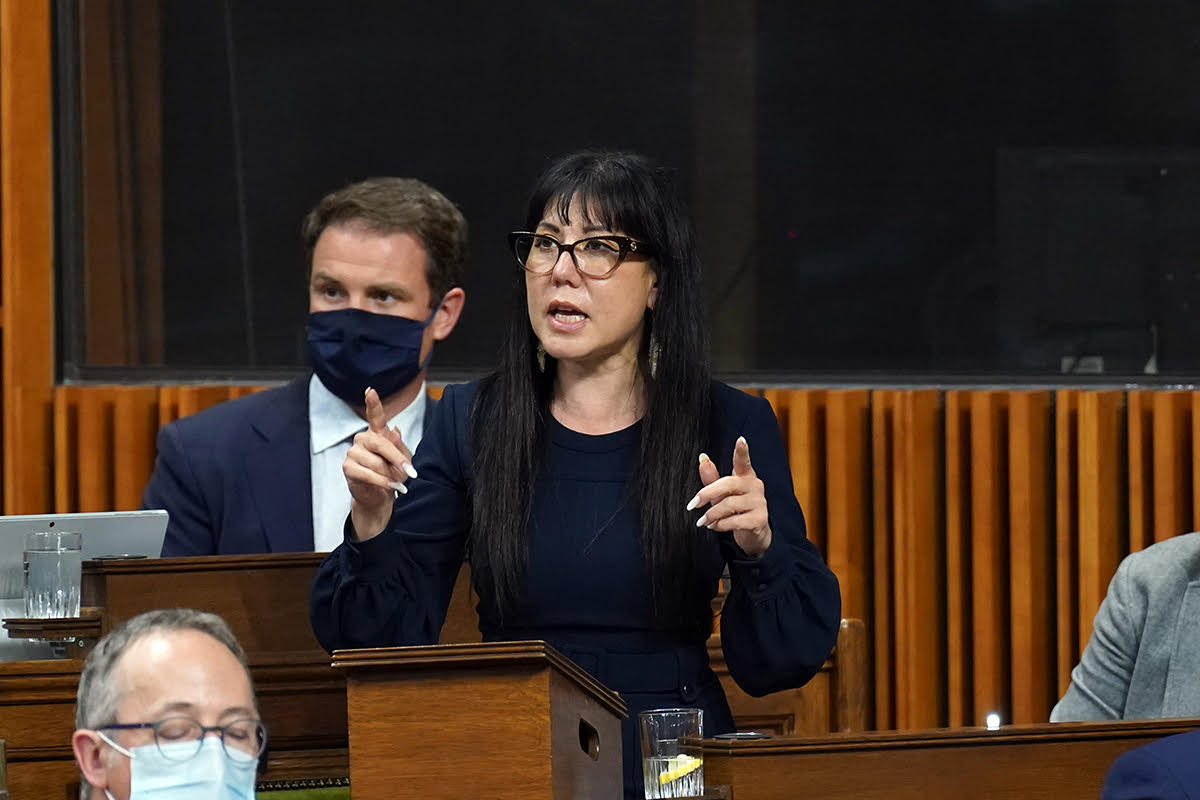 “The source of this violence is misogyny, racism rooted in white supremacy, the rise of right-wing nationalism, and far-right rhetoric," NDP Leah Gazan said in a statement. Photo courtesy of Leah Gazan
Previous story
Next story

Warning: This article contains mention of abuse, harassment and rape and death threats.

“The pattern of harassment of journalists is incredibly alarming and completely unacceptable. This type of behaviour has no place in our society. No journalist should ever be threatened for doing their job,” Trudeau tweeted late Wednesday night.

The pattern of harassment of journalists is incredibly alarming and completely unacceptable. This type of behaviour has no place in our society. No journalist should ever be threatened for doing their job.

NDP MP Leah Gazan also took a stand against the harassment in an emailed statement: “Recently, it has come to our attention that female journalists, primarily members of the Black, Indigenous, and People of Colour (BIPOC), who are simply doing their job have been subjected to abuse and violence that include rape and death threats.”

The ability of journalists to report transparently and hold powerful people and institutions to account is a key pillar of a functioning democracy, and “harassment, abuse, and any other forms of violence is a direct attack on that fundamental right,” said Gazan’s statement.

In recent weeks, many prominent Canadian journalists have tweeted out screenshots of hate mail they received, rife with slurs, references to physical and sexual violence and even rape and death threats. Some hate mail referenced a wall with printed photos of “all the Canadian media c—s that need to be boogaloo’ed the f— out of Canada,” and names Toronto Star podcast co-host and producer Saba Eitizaz, Global News reporter Rachel Gilmore and Erica Ifill, a columnist with The Hill Times and co-host of the Bad + Bitchy Podcast.

I got new hate mail this morning. pic.twitter.com/qN52WhMRWg

Every few days with the anger,violence and threats to silence getting worse. This is not just me.There’s a clear,sustained and extremely organized ongoing hate campaign against Canadian journalists since last year.Most of whom are racialised, women and those who are vulnerable. pic.twitter.com/sBJ9O2RDjy

“The source of this violence is misogyny, racism rooted in white supremacy, the rise of right-wing nationalism, and far-right rhetoric that is emboldening people to lash out primarily at BIPOC journalists for doing their job to objectively scrutinize and report activities coming from these movements,” Gazan’s statement reads.

@LeahGazan issued a strong statement of support for journalists on the receiving end of an uptick of hate mail. Unlike Trudeau, Gazan acknowledged that those being targeted are primarily female and/or racialized journalists.

It is “a relief” to see a strong statement of support from Gazan, Ifill, one of the targeted journalists, told Canada’s National Observer.

“Violence is permissive. If you say nothing, people get more emboldened.”

Importantly, Gazan’s statement acknowledges how journalists with intersecting identities — namely women and Black, Indigenous and women of colour — are most often the target of racist and misogynistic threats and abuse, said Ifill.

“The prime minister took three weeks and came up with that? Oh my gosh, he really doesn't care,” she said with a short laugh.

Journalists across the country are speaking up about the uptick in threats and abuse and sharing their hate mail to draw attention to the issue.

Anna Junker, a reporter for the Edmonton Journal, recently tweeted out screenshots of hate mail she received which reference “psychological warfare,” a “summer hit list” and the need to start “prosecuting, wrecking and silencing the little criminals of the organization.”

Over the past few weeks and months it is quite clear that there is a coordinated campaign against the freedom of the press, specifically targeting women reporters, especially those who are BIPOC. 🧵

Late last night, Gilmore tweeted that “someone who clearly owns guns directly threatened and harassed my entire family,” and that her loved ones are being forced to take precautions.

I'm speaking to police about this, but it's already forcing my loved ones to take precautions.

You can disagree with my reporting. You can critique it.

But don't threaten my family.

Over the nearly three weeks of near-constant harassment, Ifill said her biggest sources of support have been the other women being targeted, her friends and Twitter followers.

Strong public statements of support like Gazan’s are important because for those being targeted, it's a “damned if you do, damned if you don’t situation,” she added.

Ifill, Gilmore and Eitizaz have all reported threats to their local police. The Canadian Association of Journalists wrote a letter to the Toronto and Ottawa police chiefs asking that they review and improve their processes for making complaints of hate speech and harassment.

We used to survive without

We used to survive without the internet. So much more civilized. As an older person I look back at that time with much longing but somehow we now think we absolutely can't manage without it. But has it not become like climate change in that we probably have no choice but to make fundamental changes to survive that involve variously "doing without," have to leave behind that dream of more togetherness that social media started with?
That disgusting quote about women being "boogalooed" out of the media likely comes from the "boogaloo boys" who are basically an alternative militia in the States who would probably not exist were it not for the massively enabling meeting room that is the internet. And there are many such groups like "Diagalon" written about by Max recently. I'm struck by the fact that Mark Zuckerberg started Facebook at college as a platform for rating women. There are NO women heading up these groups so again I consider that the ultimate question before us may be whether or not we survive the male of our species....

Absolutely correct, thanks for your thoughts.

This news is deeply

This news is deeply disturbing. And we already know that female and racialized politicians and political candidates are a target of abuse and hate.

I have just listened to the CBC podcast, "The Flamethrowers: How right-wing radio radicalized America" for a second time. It's very enlightening- and disturbing. These radio show hosts (the late Rush Limbaugh, Alex Jones, Matt Drudge etc.) have been spewing out lies and hate for decades. In fact their game is all about peddling rage and cultivating anger in their listeners...And of course there is a segment of the Canadian population that listens to these shows (and Canadian versions).

In general, the right-wing media has been successful in leading their listeners/ viewers to distrust mainstream media, conventional medicine, science etc. It is no longer a fringe movement and it's deeply dangerous to our democracy. They have misused one of democracy's major tenants, freedom of speech. Shame of them!

So it's not just the internet that is the problem, although I would agree that much of the abuse seems to happen over the internet. Sigh. At times I also miss the good ole days before the internet.

I guess we need legislation to address the growing problem of abuse, online threats etc. Please write your MP and ask him/ her to do something about this. Otherwise, it will only get worse. I'm sending this article to my MP right now.

The cops just sort of wring

The cops just sort of wring their hands and moan that it's bad but they couldn't possibly do anything because the internet is hard and it's hard to find all these random individuals. But it's nonsense. This stuff is NOT just random vile people, it's being actively organized, and in order to organize all these ordinary people into engines of hate you have to do it in fairly plain sight--you have to have some way to attract and recruit all those people. If a whole bunch of low-information knuckle-draggers can find something, surely it should be easy for the police to find, too (indeed, there are indications quite a few of them are members).

So if they wanted to find and prosecute the people organizing hate and threats and potentially violence against women journalists of colour, they could. I'm pretty sure there's some laws that stuff breaks. Indeed, if Trudeau really wanted to, he could legislate funding for an RCMP task force specifically to identify, investigate and charge organizers of internet hatred and violence, with directives to CSIS to co-operate with it. Any signs of such? (crickets)

The government DID do that

The government DID do that around the convoy and have been trying to defend it ever since thanks to the conservatives. I don't think people appreciate how difficult they must be to work around all the time. Obviously you can mainly forget about working WITH them with their purely obstructionist style borrowed from the ghastly Republicans.
So as progressives, I think we have to be less churlish toward the government. Leave that to the cons already. Just because the Liberals aren't shameless flag-wavers doesn't mean they're not working diligently under what have been unusually difficult circumstances the last few years. It's easy to condemn them for what seems to be dragging their feet but obviously governance is a tough gig in an ever more divided country and there are structural, systemic obstacles at every turn besides the cons I'm sure. (For example, the boil-water advisories on reserves, that's been an ongoing criticism but then I read some time ago that they had fixed 85 of them and there were that many more needed, but they HAD done more than half.)
Another thing they have going for them besides inherent fair-mindedness is strong solidarity of late, which is huge.

People who report violence against women of colour are hitting the primary target of our troubled age. The campaign against female reporters and other professionals is a direct threat to the future of humanity. Fascist movements glorify violence as if it triumphs over life. If you believe it does list all the challenges we face on this planet: murder, rape, war, poverty, starvation, overpopulation, extinction, cruelty, climate change - are all the result of alienation from kin. The war against women is the war against life. If it wins, humanity loses.

Indeed. As my 10 year old granddaughter says, "I don't know why men criticize women; without them they wouldn't even be here to do that." Talk about being indebted for the very tongue with which you speak. And if that seems soft and distant to many men, like nature itself, well then DO take note of the latent, simmering power of "Mother Nature" being unleashed now. Maybe they'd have more respect if it was seen as "Father Nature?"