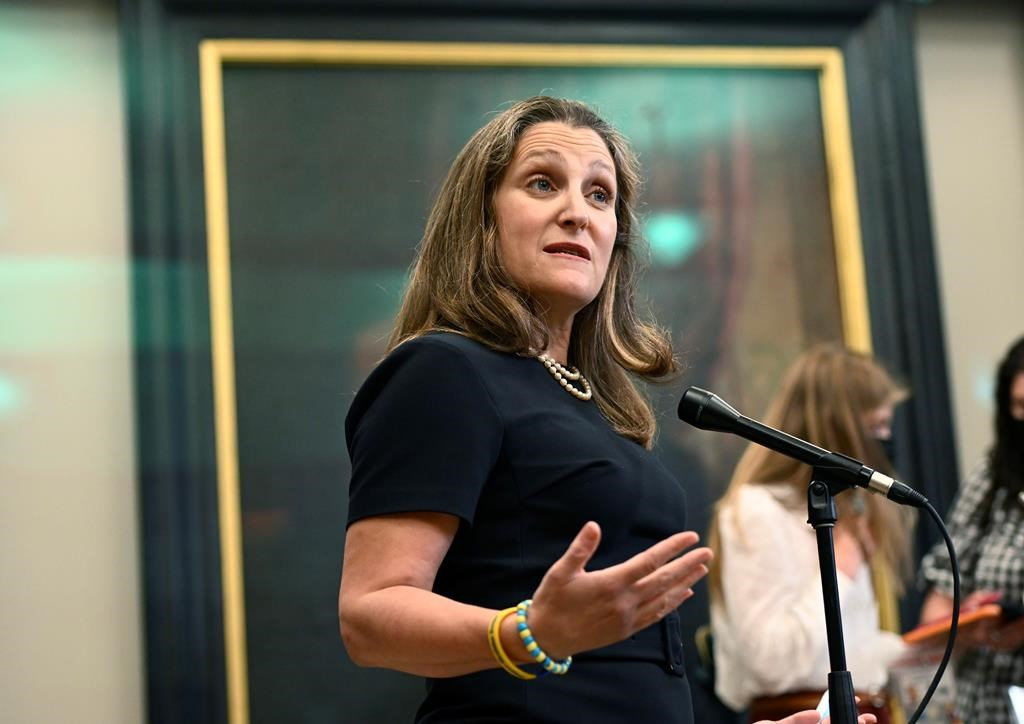 Deputy Prime Minister and Minister of Finance Chrystia Freeland speaks to reporters before heading to Question Period in the House of Commons on Parliament Hill in Ottawa on Thursday, June 23, 2022. File Photo by The Canadian Press/Justin Tang
Previous story

The RCMP says it is investigating an incident last Friday in which Deputy Prime Minister Chrystia Freeland was subjected to a profane tirade in Grande Prairie, Alta.

A video posted on Twitter by an account that voices opposition to COVID-19 public health measures shows Freeland entering an elevator while a large man approaches her, hurling profanities and calling her a "traitor."

The man in the video looms in front of the open elevator doors and tells Freeland to get out of Alberta, while a woman tells her, "You don't belong here."

In a statement, RCMP spokeswoman Robin Percival says physical or verbal actions in person or online can have significant effects and may be against the law.

She says when the threshold for a criminal charge is met, the RCMP or the police of jurisdiction may arrest and lay charges.

If the criminal threshold is not met, the RCMP examines the threats and derogatory comments from an intelligence perspective.

Under RCMP regulations, MPs can receive RCMP protection in Canada and abroad as needed.

"For security reasons, the RCMP doesn't comment on specifics when it comes to security measures afforded to the deputy prime minister," Percival said.

Protective measures are intelligence-led and are proportional to any threats or risks assessed by the RCMP, the federal threat assessment centre and other partners, she added.

"The RCMP continuously reviews its protective measures and practices in place in order to ensure a safe and secure environment for protectees."

Public Safety Minister Marco Mendicino says the incident is part of a broader pattern of objectionable behaviour, aimed in particular at women, people of colour and Indigenous people.

He said this week it is important to "bring the temperature down," adding federal officials are keeping options open to better address the phenomenon.

Asked Tuesday about the rise in threats directed toward politicians, Prime Minister Justin Trudeau said the country has been through a lot in recent years, with the COVID-19 pandemic, increasing anxiety due to climate change, and the rise in mental health and addiction problems.

"So, a lot of pressure on a lot of people. There are no easy solutions for all these challenges we're facing," he said.

"People are hurting because of all these things we're going through."

Trudeau cited a need to assuage fear and anger and respond with a positive vision of the future.

It will involve hard work, people listening to each other and various levels of government stepping up and delivering, he added.