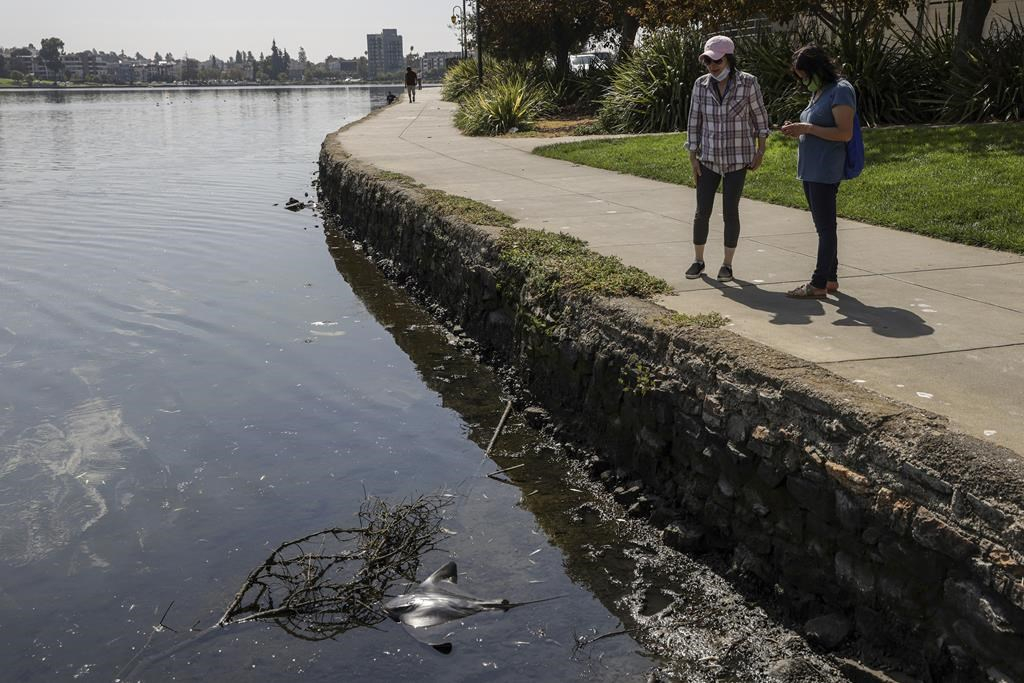 OAKLAND, Calif. (AP) — An unprecedented red tide in the San Francisco Bay Area is killing thousands of fish and other marine life whose carcasses are washing ashore, creating a foul odour that experts say could get worse during this weekend’s expected heat wave.

At Oakland's Lake Merritt, a popular spot for joggers, walkers and those looking to be in nature, crews on Wednesday began removing dead crabs, bat rays, striped bass and other fish that began piling up on its rocky shores over the weekend.

The fish dieoff at Lake Merritt and throughout the Bay Area may be due to a harmful algae bloom that has been spreading in the region since late July, said Eileen White, executive officer of the San Francisco Bay Regional Water Quality Control Board.

“We normally have algae blooms during the summertime. But what’s unusual about this one is how large it is and the fact that there are fish kills,” White said.

Most algae blooms end after a week or so. But a triple-digit heat wave forecast for the holiday weekend may help the Bay Area's grow even more, White said. She said that reports of dead fish started coming in last week.

“This was a natural occurrence of Mother Nature and so, we don’t know when it’s going to end,” she said

A microorganism called Heterosigma akashiwo formed a bloom first spotted in the Alameda Estuary, White said. It is present in the bay all the time, but scientists are trying to determine what caused it to spread so far and wide and for so many weeks.

They say a years-long drought has prevented stagnant water from flowing into the ocean and unseasonably warm and sunny weather may be helping the algae spread.

Jon Rosenfield, a scientist with the San Francisco Baykeeper conservation group, said high levels of nutrients like phosphorus and nitrogen in wastewater also drive the growth of algae blooms.

“The only lever that we have to control the problem is to reduce nutrients put into the bay from the 40 wastewater treatment plants that operate around the bay,” he said.

“It doesn’t smell very good right now, so it’s a bit of a nuisance," said Graham Webster, who jogs around Lake Merritt once or twice a week.

Rosenfield said sewage treatment plants are cleaning the water of solid material and bacteria, but they’re not designed to pull out nitrogen and phosphorus.

Treating the water for nutrients would cost billions of dollars, and those costs would be passed on to residents, White said. She said water districts are funding studies to understand the effects of nutrients that have been present in the water since people settled in the area.

“The goal is to make the appropriate regulations based on sound science,” White said.

Experts are also trying to determine what exactly is killing the fish.

Algae blooms produce a toxin that is lethal to fish and other marine life, and as they spread, bacteria in the water start to consume the algae. As it decays, it depletes the water of oxygen, leading the fish to suffocate, Rosenfield said.

"Which of those mechanisms is operating here, the toxin or the low dissolved oxygen? We just don’t know yet,” he said.

Algae bloom has been reported in Contra Costa and Marin counties to the north and San Mateo County to the west. In the South Bay, concentrations of chlorophyll — an indicator of algae density —measured on Aug. 10 were the highest observed in more than 40 years, White said.

In Oakland, people turned to social media to post photos of the thousands of dead fish at Lake Merritt, where visitors have started complaining about the stench.

“It doesn’t smell very good right now, so it’s a bit of a nuisance," said Graham Webster, who jogs around the lake once or twice a week.

“But the bigger question is what’s happening to the lake and the bay? And what’s causing it? Is it our fault? Can it be fixed?" he asked.

White said the algae aren’t known to be toxic to people, but they can cause skin and eye irritation. Her office is recommending people and pets stay out of any water that looks reddish-brown.

Cely Aquino said she visits Lake Merritt regularly and seeing all the dead fish was sad.

“I saw a lot of the dead fish, and I saw a couple of stingrays that were dead also. It’s pretty sad,” she said. "But I figure nature it’s going to take care of it all.”

"...nature is going to take