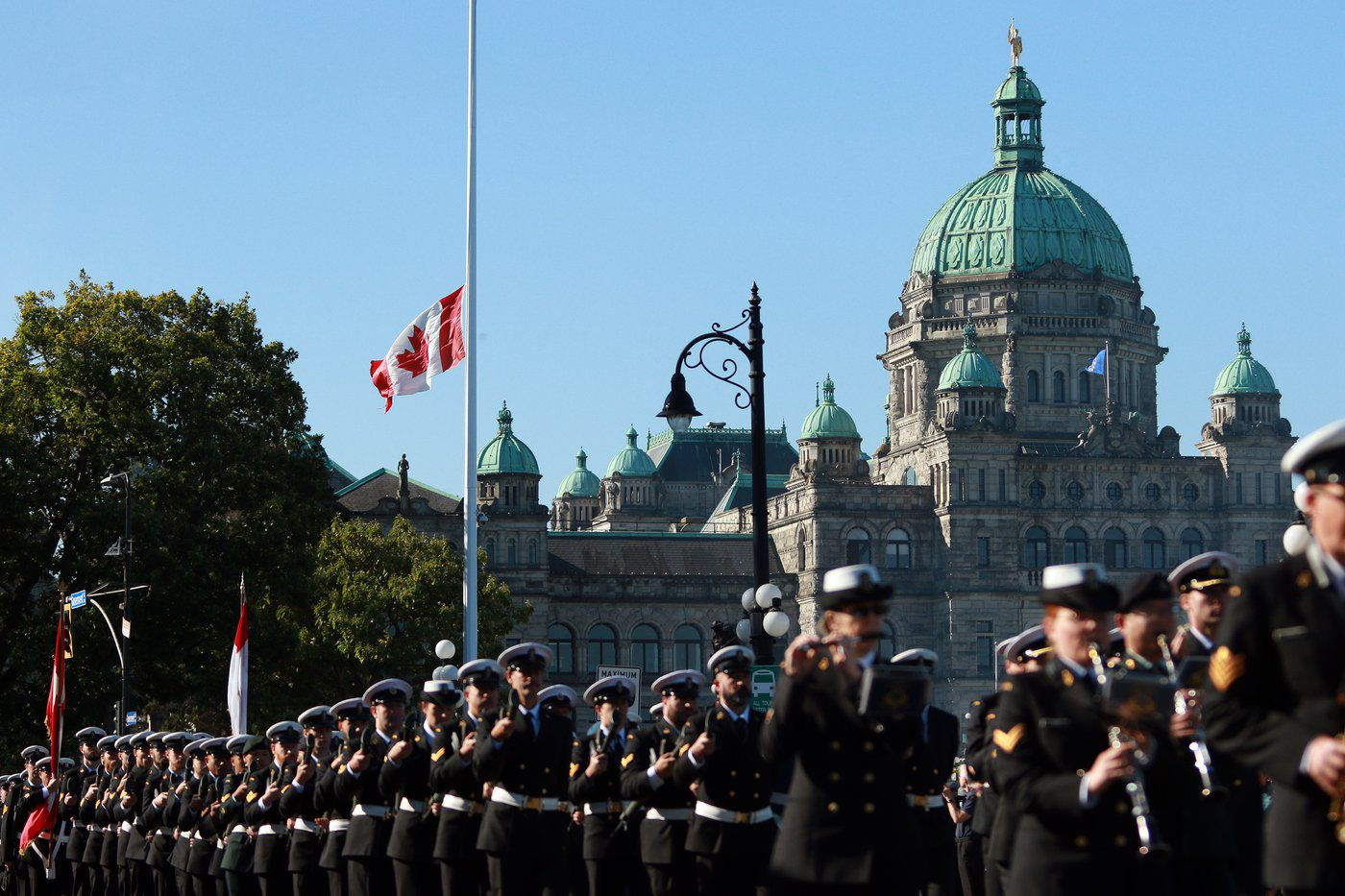 A navy band and Royal Guard of Honour lead the ceremonial procession for Queen Elizabeth from the B.C. legislature during a national day of mourning in Victoria on Monday, Sept. 19, 2022. Photo by The Canadian Press/Chad Hipolito
Previous story

Dignitaries including British Columbia's premier and lieutenant-governor joined a commemorative service Monday in honour of Queen Elizabeth in the capital city named after her great-great-grandmother.

The service at Victoria's Christ Church Cathedral followed a procession that began at the legislature and was led by the Royal Canadian Navy Naden Band and members of a 100-member guard carrying their rifles upside down as a mark of mourning.

A riderless horse, symbolizing a fallen comrade and representing the queen's love of horses, was part of the 1.4-kilometre march with a 21-cannon salute amid the sound of drumming and the clip-clop of hoofs.

Seventeen-year-old Beatrice Morrison, dressed in the uniform of the 5th Garry Oak scouts of Oak Bay, said she stood along the procession route because she wanted to pay her respects to the monarch.

“The queen has been with me since I was born,” Morrison said. "In our lifetime, I think, in my lifetime, we're never going to have another queen."

A woman visiting Canada for the first time from Ukraine at the invitation of a retired Canadian police officer said the queen is a good example of women in leadership.

"I really would like to be part of this historic moment," said Kate, who wore a red Maple Leaf cap and declined to give her last name because she said she still works with law enforcement.

"I thought it was very appropriate to come down here and pay respects," MacDonald said. "I was sad, too."

He said he sensed the gathering of people helped everybody mourn together.

"It was interesting to feel some emotion. I'm not sure if it was because you were in a crowd of people who are feeling emotions," said MacDonald. "It's interesting. We're brother and sister. Our mom was a real royalist and I kept thinking about her."

Chappell, who lives near Government House in Victoria where the queen has stayed in the past, said she couldn't help but recall her memories of the queen.

"There will never be another one like her," she said.

Many of the mourners who lined the streets under blue skies also joined the service in the cathedral, where prayers were offered by an imam, a rabbi, the Roman Catholic Archbishop of Victoria and the Bishop of the Diocese of British Columbia.

Premier John Horgan said the queen had been served by 12 Canadian prime ministers and 13 B.C. premiers, some who were attending the service in honour of a leader who exemplified service and grace over seven decades on the throne.

"Her face is as familiar as a comforting grandparent. We see her on our coins and on our stamps. I recall as a young boy finding money that had a man on it and I thought it wasn't as valuable as that which had the picture of my grandmother," he told attendees.

British Columbia hosted the queen seven times, including once when she was a princess, Horgan said, adding she was present for many important points in the province's history.

They included B.C.'s centennial celebration in 1971, the Commonwealth Games in Victoria in 1994 and her Golden Jubilee in 2002, he said.

"These memories will be cherished by the crowds of people who came to greet her. And over the years, the queen travelled from Spences Bridge to Kamloops. She went to the rodeo in Williams Lake and she opened the Prince Rupert Regional Hospital."

On her visit to Victoria in 2002, the queen was greeted by the Snowbirds in the sky and corgis lining the street as she made her way to the cathedral where mourners now gathered to pay their final respects, the premier said.

Another memory that stood out for Horgan during the Golden Jubilee celebrations included the queen dropping the puck at centre ice before a hockey game between the Vancouver Canucks and San Jose Sharks.

"What's more Canadian than being at a hockey game? But there she was, handbag in place, puck in hand. She met Canadian royalty at that time. Wayne Gretzky was there. Olympic gold medallist Cassie Campbell was there. And of course, Hall of Famer Howie Meeker."

During one visit to the province, Coast Salish people bestowed upon the queen a name that translates to "mother of all, respected by all," he said.

Horgan said he has walked by a portrait of the queen in his office every day for five years but it would be replaced later Tuesday with a new photo of King Charles III.

This report by The Canadian Press was first published Sept. 19, 2022.