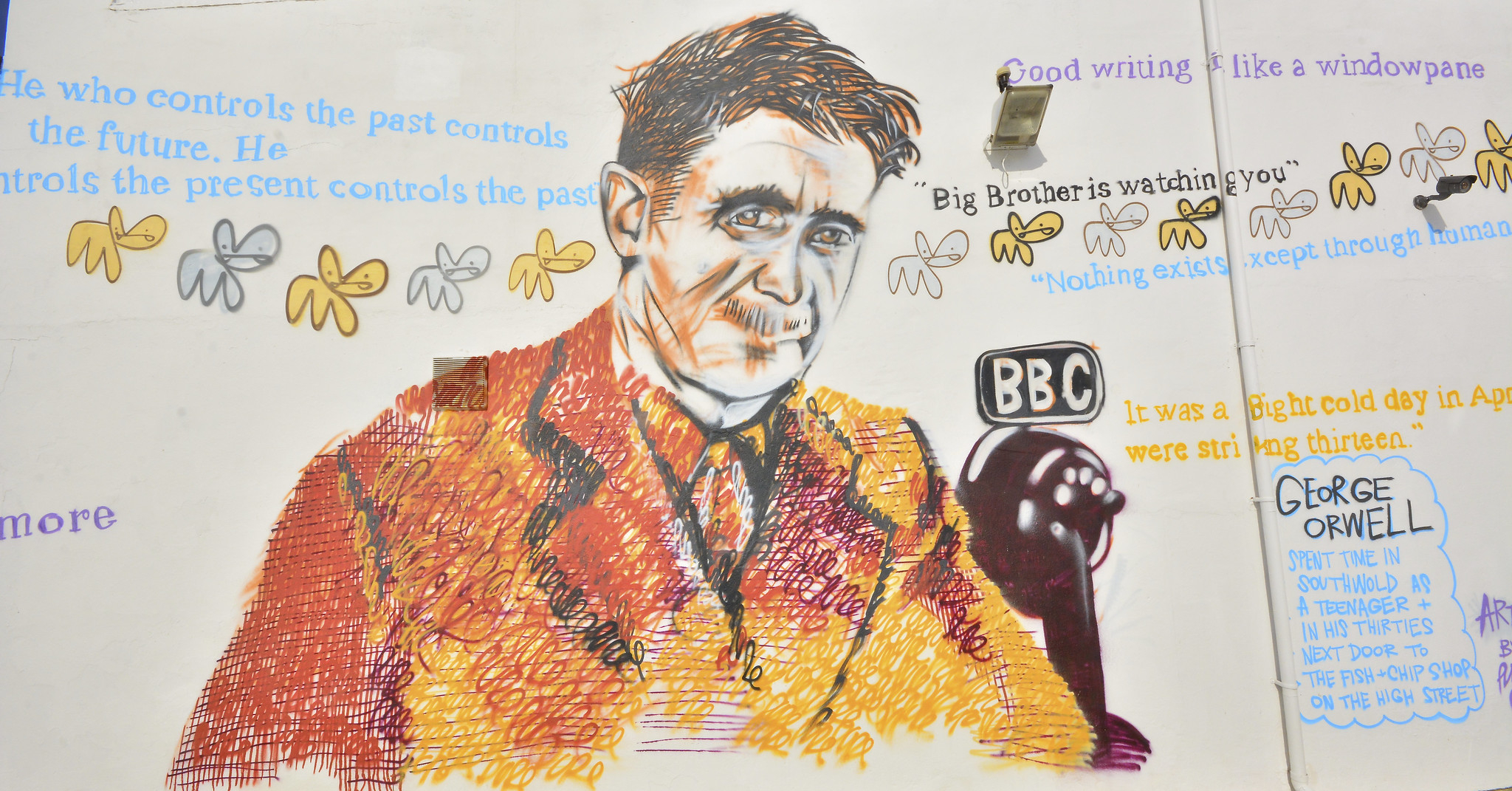 A mural of George Orwell in Southwold, a small town on the North Sea coast in the English county of Suffolk. Photo by Martin Pettitt/Flickr (CC BY 2.0)
Previous story

In the decades since his death in 1950, George Orwell’s name has become synonymous with the desire to resist tyranny and totalitarianism. His books have been taught to generations of students, and the lessons contained in them have inspired some of the world’s greatest thinkers and political leaders. But now, as his work enjoys its latest renaissance, he’s become something quite different: the victim of cultural appropriation.

This is obviously stretching the accepted definition of that term, which usually refers to situations when “members of a majority group adopt cultural elements of a minority group in an exploitative, disrespectful, or stereotypical way.” But the treatment of Orwell’s work by far-right conservatives is transparently exploitative and disrespectful, and their efforts to weaponize Orwell’s words in the service of arguments and ideas he would never have supported is an insult to his memory. Rick Scott, the Florida senator who invoked Orwell’s name during his address to this year’s CPAC conference in August, is just the latest example of this deeply irritating trend.

The work to which these Orwell-enthralled conservatives are most commonly drawn is, of course, 1984. They seem to think its critique of authoritarianism and the provisional role truth plays in its shadow validates their maximalist view of free speech on anything from COVID-19 conspiracy theories to bigotry directed at minorities, immigrants and the LGBTQ community. Any attempt to curtail hate speech or contain the spread of misinformation is, in their eyes, a textbook example of the “thought police” from the book’s fictional superstate of Oceania.

Take Twitter’s long overdue decision in January 2021 to ban Donald Trump from its platform. “We are living Orwell's 1984,” his son Don Jr. tweeted. “Free-speech no longer exists in America.” Twitter, of course, is a private business, not an arm of the government, and it can ban anyone it wants. As Washington Post book critic Ron Charles noted, Trump Jr. was still speaking freely to his 6.5 million followers. “Irony is having a heyday,” he said.

It’s not just American conservatives who are misrepresenting the meaning of Orwell’s name and words. In the video announcing his leadership aspirations, Pierre Poilievre had a copy of 1984 sitting behind him on his bookshelf. And back in February 2020, then-CPC leader Andrew Scheer told Parliament: “George Orwell’s 1984 was supposed to be a cautionary tale about the evils of big government, not an instruction manual for this prime minister.”

This is a profound misreading of that book’s message, although hardly a surprising one coming from someone like Scheer. After all, the most obviously Orwellian moments of the last few years have actually come from people like Trump. When his administration’s first press secretary, Sean Spicer, claimed his inauguration drew the “largest audience ever” on his first day in office, Trump set the tone early. “Easily disproved by widely available visual evidence,” Charles, the Washington Post book critic, wrote, “Spicer’s fib fulfilled Winston Smith’s prediction in 1984: ‘In the end, the Party would announce that two and two made five, and you would have to believe it.’”

Make no mistake: those on the right who invoke Orwell’s words in the service of their own are hypocrites of the highest order. Orwell, after all, was an avowed democratic socialist, and socialism is one of the right’s favourite bugbears in 2022. He would have been steadfastly and vocally opposed to the sort of authoritarian impulses that increasingly animate both the Trumpist leaders who now run the Republican Party and their imitators and admirers here in Canada.

“Every line of serious work that I have written since 1936 has been written, directly or indirectly, against totalitarianism and for democratic socialism, as I understand it,” Orwell said in his 1946 essay “Why I Write.”

And while 1984 and Animal Farm have traditionally gotten most of the Orwell-related attention, the book that everyone should be reading — the book that most clearly speaks to the moment we’re in right now — is 1938’s Homage to Catalonia. His coverage of the Spanish civil war, and his participation in it, was the ultimate act of speaking truth to power — especially when it came to his own side of the ideological fence. His criticism of the excesses of the Stalinist forces, and by proxy the movement that it represented, did not make him popular within the political circles he tended to run. Orwell, to his eternal credit, didn’t care.

This is hardly some literary or historical footnote, either. As Derek Dunn, a reporter with the Arnprior Chronicle-Guide, wrote back in March, the conditions Orwell documented in Homage to Catalonia seem to be returning with a vengeance. “Violent thugs are taking root in Europe. Confidence is building among similar people in North America. They smell chaos in the wind and are goaded on by far-right politicians and media personalities.”

Opinion: These days, as his work enjoys its latest renaissance, George Orwell’s become something quite different: the victim of cultural appropriation, columnist @maxfawcett writes for @NatObserver.

Our salvation from this gathering storm is the same one that Orwell prescribed in his book: the unflinching truth. The late Christopher Hitchens, who probably admired Orwell as much as anyone who ever lived, wrote about Orwell’s unique capacity for honesty in a 2012 piece for Vanity Fair. “By declining to lie, even as far as possible to himself, and by his determination to seek elusive but verifiable truth, he showed how much can be accomplished by an individual who unites the qualities of intellectual honesty and moral courage.”

In an age of rampant misinformation and bad-faith actors, we need those qualities more than ever. “Freedom,” Orwell wrote, “is the freedom to say that two plus two make four. If that is granted, all else follows.”

What a perceptive and

What a perceptive and thoughtful article by Max Fawcett regarding the conservative misappropriation of George Orwell. Perhaps it could be fleshed out a bit and submitted to “The Conversation” for publication there, as I think it would be of great interest to the academics and educators who teach our young people about Orwell.

Thank you for this informative article. Some pants down recent real life examples from Trump to Poilievre, And I always thought that Conservatives were just projecting all the time.

"The late Christopher Hitchens, who probably admired Orwell as much as anyone who ever lived, wrote about Orwell’s unique capacity for honesty in a 2012 piece for Vanity Fair. 'By declining to lie, even as far as possible to himself, and by his determination to seek elusive but verifiable truth, he showed how much can be accomplished by an individual who unites the qualities of intellectual honesty and moral courage.'"

Not sure Hitchens is the ideal spokesman here. Hitchens was an outspoken supporter of Bush's war in Iraq after 9-11. A devastating war built on lies.

"He also supported the United States in the Kosovo War, the Afghanistan War, the Iraq War and other military interventions.
"After 9/11, Hitchens advocated the invasion of Iraq.
"He left The Nation in 2002 after profoundly disagreeing with other contributors over the Iraq War
"Hitchens's strong advocacy of the war in Iraq gained him a wider readership…
"The 11 September attacks 'exhilarated' him, bringing into focus 'a battle between everything I love and everything I hate' and strengthening his embrace of an interventionist foreign policy that challenged 'fascism with an Islamic face.' His numerous editorials in support of the Iraq War caused some to label him a neoconservative…"
https://en.wikipedia.org/wiki/Christopher_Hitchens

"Hitchens employed the term 'Islamofascist' and supported the Iraq War, causing his critics to consider him a 'neoconservative'. In 2004, Hitchens stated that neoconservative support for US intervention in Iraq convinced him that he was 'on the same side as the neo-conservatives' when it came to contemporary foreign policy issues, and characterized himself as an unqualified 'supporter of Paul Wolfowitz.' He referred to his associations as 'temporary neocon allies'.
"Hitchens argued the case for the Iraq War in a 2003 collection of essays entitled A Long Short War: The Postponed Liberation of Iraq. In its obituary of Hitchens, The Economist wrote that, 'on the most consequential political issue of the last decade of his life, the bullshit got him.'"
https://en.wikipedia.org/wiki/Political_views_of_Christopher_Hitchens#Ir...

Madeleine Albright in drag, Hitchens cheerfully ignored the huge toll sanctions took on Iraqi children.
The sanctions destroyed the Iraqi economy, leaving Iraqis destitute, while Saddam Hussein lived it up in his palaces.

Right on Max. Easy to see why

Right on Max. Easy to see why Conservatives seem to be so easily gaslighted while using authors whose work meant exactly the opposite. What has happened in the USA, in now approaching warp speed in Canada, Especially Alberta. While reading a local newspaper editorial about how the feds disrespect Albertans, as an Albertan do I perceive that? Nope. In my over 70 years living in 3 of 4 Western Provinces, have I ever felt unfree, or my freedom impaired or threatened? Not once. Pollievre is selling smoke and mirrors. Pure fantasy. Just like Kenney did.

I'm one of those people who

I'm one of those people who have read books by Orwell other than _1984_ and _Animal Farm_. I agree that _Homage to Catalonia_ is well worth reading. (I'll make an aside here that I am amazed that Anarchists say that the book supports their cause, when in fact it did the exact opposite.)
I'm commenting to recommend another excellent piece by Orwell, "Looking Back on the Spanish War". https://www.orwellfoundation.com/the-orwell-foundation/orwell/essays-and... Orwell observed in 1942 that the "post-truth era" was already a thing.