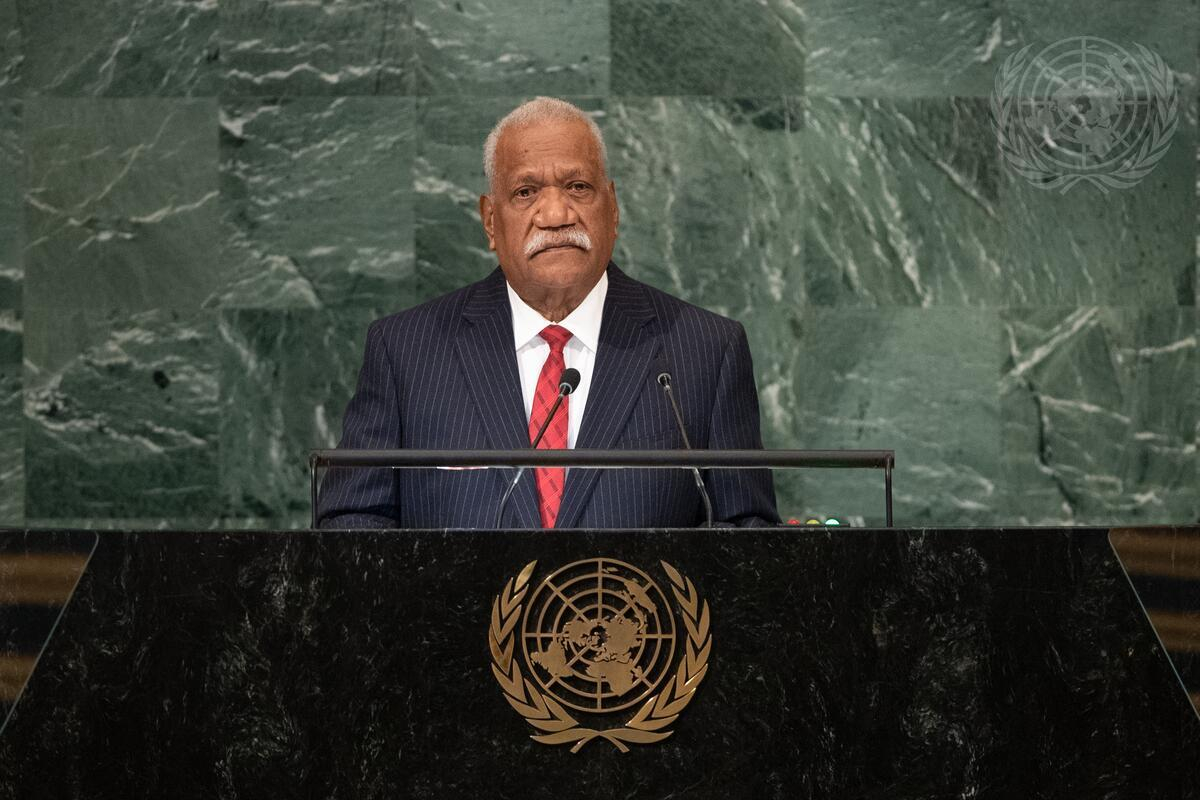 On the floor of the United Nations General Assembly Friday, the president of Vanuatu called for a fossil fuel non-proliferation treaty, marking the first time a country has done so. The move signals a major turning point in the international fight against the industry whose products are the main driver of climate change.

“Every day, we are experiencing the debilitating consequences of the climate crisis and the world is now demanding more ambitious action… Our youth are terrified of the future world we are handing to them through expanding fossil fuel dependency, compromising intergenerational trust and equity,” said President Nikenike Vurobaravu. “Fundamental human rights are being violated, and we are measuring climate change not in degrees of Celsius or tons of carbon, but in human lives.

“We call for the development of a fossil fuel non-proliferation treaty to phase down coal, oil and gas production in line with (keeping global warming at) 1.5 C and enable a global just transition for every worker, community and nation with fossil fuel dependence,” he said.

Vulnerable Pacific island states have long been at the forefront of climate leadership, and Vanuatu’s call builds on years of diplomatic efforts to curb fossil fuel production. Eight years ago, 14 Pacific island nations met in the Solomon Islands to consider a treaty that would ban new fossil fuel development for signatories and commit them to renewable energy targets. At the UN climate conference in 2017, Fiji underscored the importance of managing the phaseout of fossil fuels, and at COP26 in Glasgow last year, Tuvalu was at the forefront of pushing for reparations for damage caused by climate change.

Inspired by nuclear weapon non-proliferation agreements, the Fossil Fuel Non-Proliferation Treaty Initiative was launched two years ago with support from civil society organizations. The initiative, chaired by prominent Canadian climate advocate Tzeporah Berman, has grown quickly, and today is backed by more than 750 organizations; cities like Toronto, London and Los Angeles; thousands of scientists; academics and politicians, as well as over 100 Nobel laureates.

“If you look throughout history — the landmine treaty, chemical weapons ban, nuclear non-proliferation — the first country calling for a treaty on the floor of the United Nations General Assembly has always been a turning point where the idea goes from being an idea called for by civil society to an idea debated in the halls of power,” Berman told Canada’s National Observer on a phone call from New York City this week.

“A lot of vulnerable nations and countries in the Global South are particularly interested [in the treaty] because they're the ones who are suffering the most impacts of climate change,” she said. “And most of those countries are not ones that are producing fossil fuels, and they're very frustrated and pretty angry that the majority of expansion of fossil fuel production right now is in the Global North and not aligned with our climate goals.”

Earlier in the week, the Carbon Tracker Initiative and Global Energy Monitor published the first global database of oil and gas reserves. It includes information about who owns them and what the greenhouse gas emissions would be if those fossil fuels were burned. An accompanying analysis revealed that if the world’s countries extracted and burned all of their known oil and gas reserves, it would add at least 3.5 trillion tonnes of greenhouse gas emissions to the atmosphere — more than seven times the world’s remaining carbon budget if we are to stay within the Paris Agreement’s aspirational goal of keeping global warming to 1.5 C.

Campanale added the registry will help banks and investors assess the risk of projects they invest in becoming worth less than expected as the global energy transition unfolds.

"Fundamental human rights are being violated, and we are measuring climate change not in degrees of Celsius or tons of carbon, but in human lives.”

Canada ranks seventh among countries, with the equivalent of more than 10 trillion barrels of oil in known reserves that would release 4.62 billion tonnes of emissions into the atmosphere if burned.

“The [registry] will help governments, companies, and investors make decisions to align their fossil fuel production with the 1.5 temperature limit and, thus, concretely prevent the demise of our island homes, as well as all countries throughout our global community,” he said.

Berman called the registry a complementary tool for the Fossil Fuel Non-Proliferation Treaty Initiative because of the transparency and accountability it offers.

Berman said the status quo where countries and companies are allowed to extract and burn as many fossil fuels as they want while simultaneously trying to constrain global emissions is “absurd.” The only constraints on fossil fuel development, she said, are energy and financial markets, and markets are distorted by billions of dollars of fossil fuel subsidies. She pointed to a recent report from the Organization for Economic Co-operation and Development (OECD) and International Energy Agency that found fossil fuel subsidies grew 51 per cent globally in 2021, reaching over $900 billion in total.

“We're distorting the markets, governments are trying to keep their own fossil fuel production alive, and we're on track to build 110 per cent more than the world can ever burn or it will burn us,” Berman said. “How can we build the world we want and the infrastructure we need to have cleaner and safer energy systems, heating systems and transportation if our money, our political capital and our time are being spent on building more oil, gas and coal that we know we can never use if we want to have a livable planet?”

The Fossil Fuel Non-Proliferation Treaty Initiative also dovetails with the Beyond Oil and Gas Alliance (BOGA) launched at COP26 last year. That alliance, led by Costa Rica and Denmark, is a diplomatic effort that aims to phase out global oil and gas production. However, unlike the Fossil Fuel Non-Proliferation Treaty Initiative, which ultimately has an international agreement in its crosshairs, BOGA is focused on requiring its 14 members to curb fossil fuels within their own borders.

BOGA “is not in Canada’s interest, as its aim to phase out the oil and gas sector conflicts with Canadian policy ensuring the sector has a sustainable role in a net-zero world,” reads a briefing note received through a federal access-to-information request by Canada’s National Observer that was prepared for Natural Resources Canada staff ahead of a meeting with Denmark’s climate change ambassador at COP26.

On Wednesday, Oil Change International published a report analyzing the alliance’s performance over the past year and outlined a series of recommendations to prevent it from becoming a space for countries to greenwash their commitments. High among the recommendations are putting in place clear timelines for countries to meet stricter requirements or risk being kicked out, transforming the alliance to champion a just transition, technical and financial support to Global South countries and for countries to link domestic commitments with international action through diplomacy.

'This is how a Pacific atoll dies': Island nations will drown