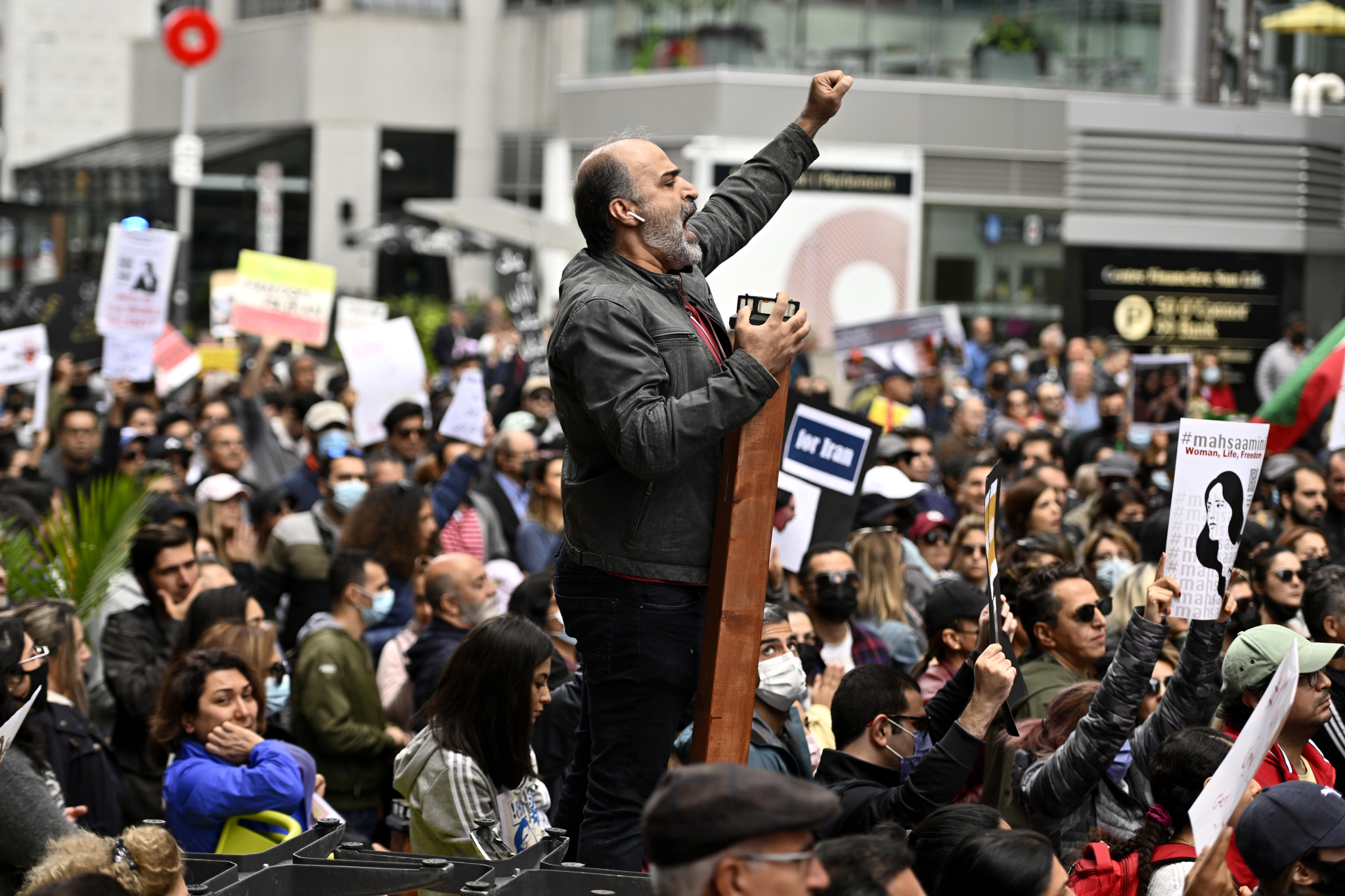 After the death of 22-year-old Mahsa Amini two weeks ago, Golareh took to the streets of Toronto in protest. She was surprised by the number of people who joined her, mourning the young woman's death and expressing their anger over violence and oppression against women in Iran.

The 35-year-old Iranian-Canadian woman, who declined to give her real name to protect her and her family's safety, says the turnout shows solidarity with Amini's family and freedom fighters in Iran.

“No matter where we are, we are all suffering the same pain,” she said.

Amini’s death has sparked protests around the world. The young woman died in custody on Sept. 16 after she was accused of improperly wearing a head scarf by Iran’s morality police. Since then, dozens of protesters have been killed in the country due to clashes with government security forces, CNN reports, prompting Iranian authorities to restrict internet access. In Canada, thousands of people have also taken to the streets.

At one Toronto protest, Golareh watched demonstrators cut their hair as a symbolic act of mourning for Amini while others chanted her name.

“I don’t know how to describe it, but it’s like it’s happened to our own sister or daughter while we are thousands of miles away,” she said.

Toronto is often referred to by Iranian-Canadians as “Tehronto” after Tehran, the capital city of Iran, because of the large number of Iranians who live there. The 2016 Statistics Canada census profile shows just under 45 per cent of people in Canada with Iranian ethnic origins reside in the city.

Reza Khosrozadeh, 24, was at the Finch subway station when he saw a local artist playing the cello. He asked if the musician knew who Amini was. The artist answered yes and offered to play something for Khosrozadeh and Amini.

I told him, could you play something for #MahsaAmini ?
Then, he improvised this!
I just couldn’t hold my tears…🖤
(Location: Finch subway in Toronto)
His instagram: https://t.co/BUXhwnkfM8 pic.twitter.com/qUIPchwoDX

Khosrozadeh said he was crying during the performance because it was so tragic and captured what happened to Amini so well. He shared the performance on Twitter with his followers.

Toronto is often referred to by Iranian-Canadians as “Tehronto” because of the large number of Iranians who live there. After the death of 22-year-old Mahsa Amini two weeks ago, many took to the city's streets in protest.

“When I see people who are non-Iranian, who don’t live in our country and don’t know what’s going on or how the government treats us, it makes me feel not alone and that other people understand the situation and want to help,” said Khosrozadeh, who was born in Iran. Currently studying for his master's degree in Canada, he travelled to Toronto to take part in the Oct. 1 protests set to happen this weekend.

“On behalf of other students, the next generation in Iran who want freedom, we have the opportunity because we live in Canada and have a democracy to say our opinions,” Khosrozadeh said. “After they shut down the internet in Iran, we decided to raise our voices and make it louder.”

Khosrozadeh says unity among people is the most important thing right now. “We want freedom, human rights and women’s rights,” he said. “Although people have different opinions, we shouldn't focus on our differences right now. We should focus on the goal right now, which is freedom and a better country. To bring peace to the war.”

Ashkan Etemadi, an Iranian monarchist who lives in Toronto, has documented recent protests for a YouTube video.

Etemadi hopes the current uprising “will see as little bloodshed as possible at the hands of the regime.”

Khosrozadeh has no message for politicians in Iran; he believes they are all corrupt. For the future, he looks toward the new generation of Iranians being educated around the world who will come back to help rebuild Iran.

Golareh encourages anyone who wants to help to spread the word and urges people not to be indifferent. “Your silence will kill the brave freedom fighters. Like Nazi Germany, this regime will be overthrown soon and become nothing but just a dark chapter in history. When that happens, you will be proud of yourself because you were the voice of voiceless freedom fighters who fought with bare hands against one of the most brutal, barbaric, gender apartheid regimes in history,” she said.

At the end of his video, Etemadi says he hopes the images of protest in Toronto reach Iranians inside the country. “Your compatriots have not forgotten about you,” he says. “We are here and we stand with you.”

‘This could have been any one of us’: Iranian-Canadian woman calls for change after Mahsa Amini’s death

Senate group pushes for a climate lens for all legislation