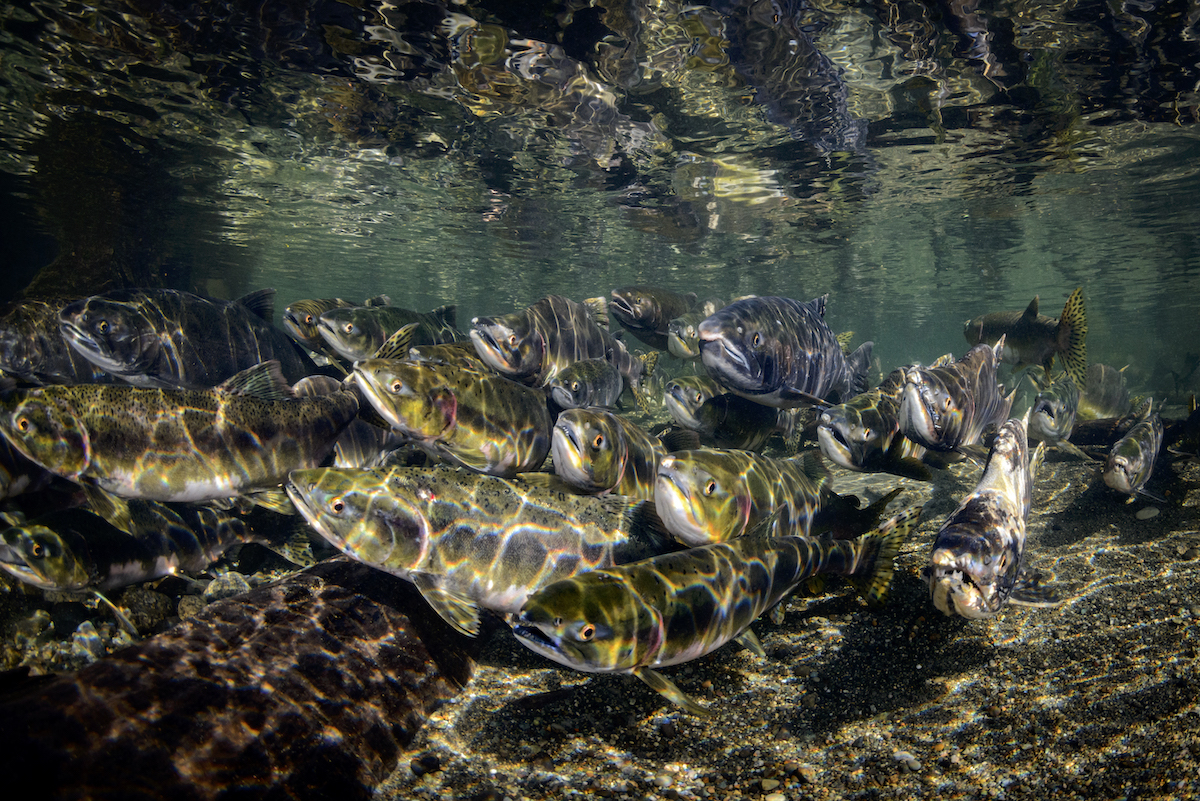 Pink salmon, which return to Campbell River in early autumn, rest in a shallow pool before heading upstream to spawn. Photo by Eiko Jones
Previous story
Next story

After hiking along the Campbell River in unseasonably warm September sunshine, wrestling my middle-aged body into a wetsuit is no easy feat.

But I’m determined to get a new angle on the iconic West Coast keystone species I so regularly write about as a reporter. I’m going swimming with salmon.

By the time I’m fully kitted out with snorkel gear and my underwater camera, I’m eager to get into the cold, rushing water. I frog-march down the bank and am rewarded almost immediately after lying spread eagle in a relatively shallow section of the river.

A loose cluster of juvenile coho, their bodies the length of an index finger, hover in the green-hued water in the company of a single black-speckled cutthroat trout.

The larger fish cuts back and forth to get out of my way. But the black-barred little fish with eyes lit golden by the light move in closer, seemingly curious about this gangly interloper.

I’m so wrapped up in the little coho that I fail to notice an undulating wall of adult pink salmon off to my right.

I briefly choke on the water that enters my snorkel in surprise. There must be at least a thousand fish resting in a shallow pool before continuing their journey upstream to spawn.

Pink salmon, which can weigh as much as 11 pounds and reach two feet in length, are silvery during their ocean phase.

Campbell River can see upwards of a million pink salmon return in a banner year and is a great place to appreciate the fundamental role the iconic fish play in B.C.'s marine, freshwater and terrestrial ecosystems. #biodiversity #SwimWithSalmon

But on their return home to their natal B.C. rivers at the end of a two-year life cycle, they develop green-grey backs and light bellies. They’re known as “humpies” because the male fish develops a characteristic humped back and protruding jaw in its spawning phase.

Despite a lifelong respect for and fascination with salmon, I’m fully unprepared for the dignity and strength of the fish in their element.

Most of my salmon observations involve watching them from shore in the last stages of their life. In decay and thrashing about in shallows to spawn. Or floundering on the deck of a boat after being pulled from the ocean on a hook.

As a living mass, the salmon are somewhat intimidating. They part around me like quicksilver and school effortlessly together again after I float past. Their spotted tails are a translucent yellow when backlit by shifting shafts of light in the water.

I’m not nearly as adept with my fins as they are. I fight the current to return upriver and make repeated passes by the school, thrashing my legs and arms and using any available logs and rocks to pull myself forward.

The pinks, however, aimed head-first into the current, and make minimal movements. Maintaining their stationary position in the rushing river looks effortless.

I last as long as the battery in my camera before exiting the river. Examining my photos and video later, I’m disappointed by the results, which fail to illustrate the magic of my experience.

Renowned salmon photographer and filmmaker Eiko Jones is unsurprised. He’s spent years in freshwater to successfully document all the stages of the life cycle of Pacific salmon in a dynamic environment.

It often takes hours of waiting, submerged in the river, to secure a single shot he’s looking for, Jones says.

Capturing the moment at which a salmon spawns — a 10-second window at the end of a multi-year life cycle — has required a lot of learning about salmon behaviour, he adds.

Campbell River, which can host upwards of a million pink salmon during banner runs, was an ideal space to develop his craft.

But it’s the resilience of salmon and the fundamental role they play in the marine, freshwater and terrestrial ecosystems on the West Coast that continue to capture his attention.

“It’s a big part of the cycle of life, how it all happens, and I just love being witness to that,” Jones says.

Pinks leave river systems as small fry, travelling thousands of kilometres into the Pacific to bulk up while evading a host of predators. They eventually make a synchronized return home to spawn and, ultimately, feed innumerable bears, wolves, eagles, birds and forests.

“All those nutrients are derived from way out in the Pacific … and come back in the form of fish, sometimes thousands of kilometres inland,” he says.

“If we didn’t have salmon, we wouldn’t have the same kind of forests or animals.”

People generally understand the importance of the species to coastal environments, he adds. But actually seeing the fish in the river allows folks to better appreciate salmon’s relentless push for survival.

“When people get in the water with them, I think they identify with that struggle and the effort it takes on a visceral level,” Jones says.

“And just their grace, movement and efficiency … that’s what people marvel at.”