When it comes to fighting fossil fuels, Simon Guiroy wants all hands on deck 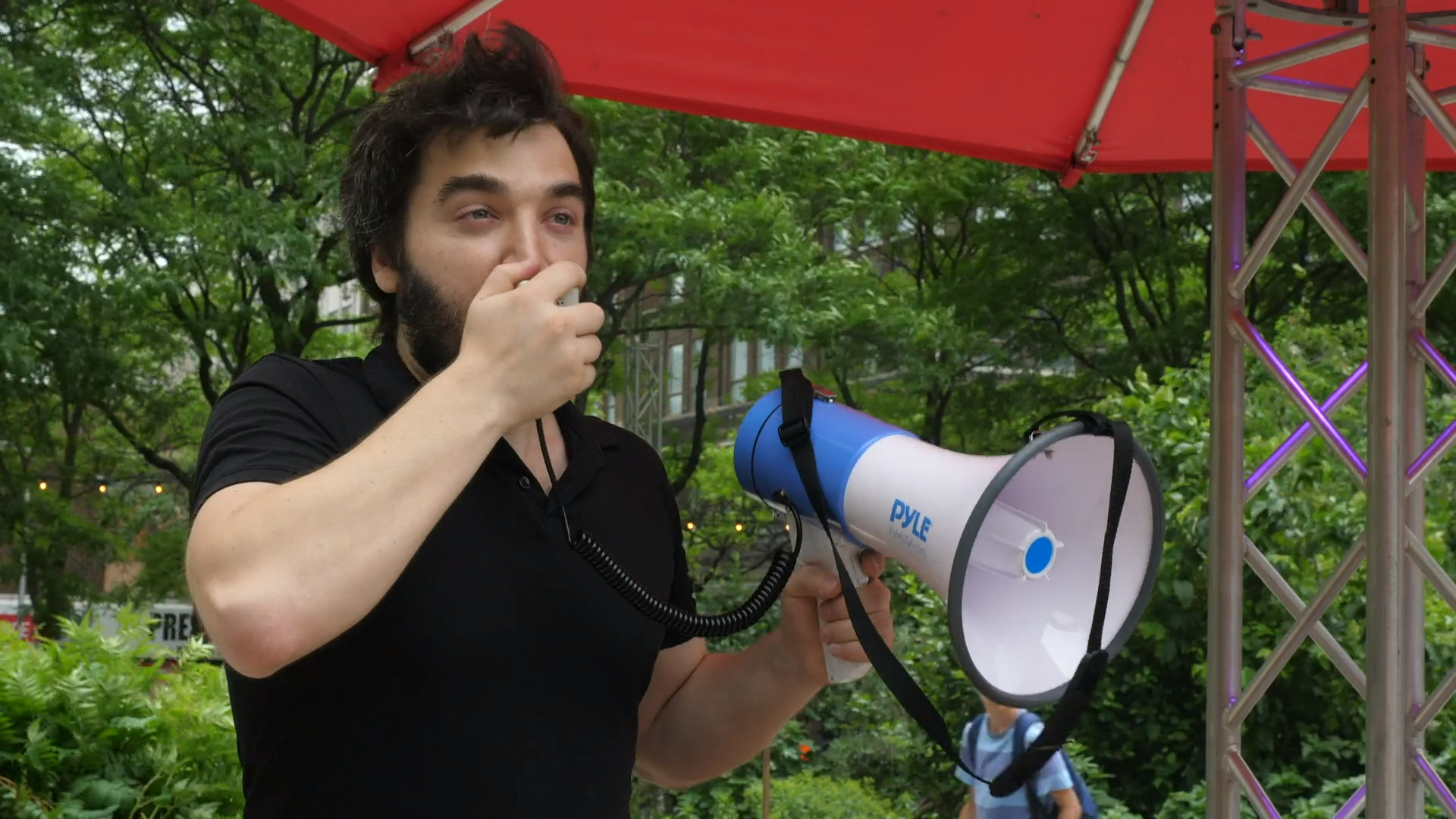 Simon Guiroy addresses the crowd at a demonstration in downtown Montreal, near the office of Environment Minister Steven Guilbeault on June 16. Photo by Santiago Bertolino
Previous story
Next story

These in-their-own-words pieces are told to Patricia Lane and co-edited with input from the interviewee for the purpose of brevity.

In 2020-21, he founded and led Arrêtons GNL, a coalition of most student unions in Quebec, in its successful campaign to pressure the provincial government to refuse approval for the GNL Québec natural gas pipeline project.

He has helped lead the subsequent successful push to have the Quebec government ban fossil fuel exploration and extraction in the province, a move Quebec made in April. Now, this 30-year-old Montreal PhD student in artificial intelligence has turned his sights on Canada.

Tell us about your campaign.

Last winter, we asked civil servants, industry experts, politicians and civil society leaders how they thought we could most effectively use our power to reduce the use of fossil fuels at the national level.

To our surprise and dismay, we learned Canada does not measure or attempt to reduce any pollution caused by the burning of fossil fuels it exports. It astounded us to learn this accounts for 1.3 times the entire domestic greenhouse gas emissions of Canada, from all sectors. The bulk of our climate problem lies there. Even worse, those emissions keep growing, and we must act quickly if we want to limit global warming to 1.5 C, a climate tipping point. The federal government controls exports, so I founded and now co-ordinate the Front étudiant d'action climatique to push Canada to measure and then make a plan to eliminate the greenhouse gas emissions produced by the burning of our coal, oil and gas in other countries. Now is the right time to act since Justin Trudeau's Liberal government is preparing to cap and reduce the emissions from the Canadian fossil fuel industry. To be meaningful, these measures must include our exported emissions.

We represent 330,000 Quebec students and have the endorsement of many groups, such as Front commun pour la transition énergétique, environmental organizations and unions. Together, we are well over two million Quebecers, and we are building solidarity with other groups across Canada.

What does the campaign entail?

Patricia Lane talks to Simon Guiroy, the Montreal-based founder of Arrêtons GNL, a coalition of most student unions in Quebec, about plans to make his fossil fuel fight Canada-wide. #YouthClimateAction

People phone, write and visit their members of Parliament asking them to support our demand. We have had demonstrations in seven electoral areas in Quebec this summer and much more is planned. The Bloc Québécois has raised it in the House. We are also in discussions with the New Democratic Party. Most MPs we talk to understand the imperative of reducing our emissions to keep warming below 1.5 C. They see the importance of a consistent approach, as all the efforts they are making to meet our Paris targets will be seriously undermined without attention to exports. They know that Canada could move from being a climate laggard on the world stage to a climate leader. They also know this is the right thing to do. But words and intentions are not enough. Gradually but steadily phasing out fossil fuels will only happen when Canadians show we are more determined than the lobbyists for the fossil fuel industry. MPs must listen to Canadians if they want to remain MPs.

What makes this work hard?

I am a student and we are volunteers and ordinary people up against the slickest lobbying in the world. While most Canadians are aware of climate change, the industry is attempting to prevent people from making the link between our production of coal, oil and gas and the health impacts we face from fires, floods, heat domes, or the tragedies of bird and biodiversity loss, the melting Arctic and rising ocean levels.

What do you see if we get this right?

This would be the most impactful way Canada could address the climate crisis. Young people and civil society would become even more confident in their power to make their government listen to them. It could inspire civil society groups. Canada would be an international example for countries to adopt similar policies by demonstrating that these are politically and economically feasible.

My parents were not activists. They were regular people who taught me to enjoy and seek out the rich cultural diversity of the people for whom they cared and to see community as the way to make things better. I feel very sad sometimes when I think we might lose the richness that is the human species if we allow the planet to become uninhabitable.

Be bold. We have run out of time for half-measures. Experience and a long history in a field are not everything. Your worries and your questions also matter. Regardless of your interests, talents or expertise, there is room for you.

Share your experience. It is precious. We don’t have time to learn everything from scratch. But don’t just be a mentor: We need you to act.

The fight against GNL Quebec

The fight against GNL Quebec was a great victory, among many other victories. As I wrote in the National Observer of Sept. 15, we are proud of all those victories. see. https://www.nationalobserver.com/2022/09/16/opinion/quebec-environmental...

Youth must take the lead in the fight against fossil fuels.