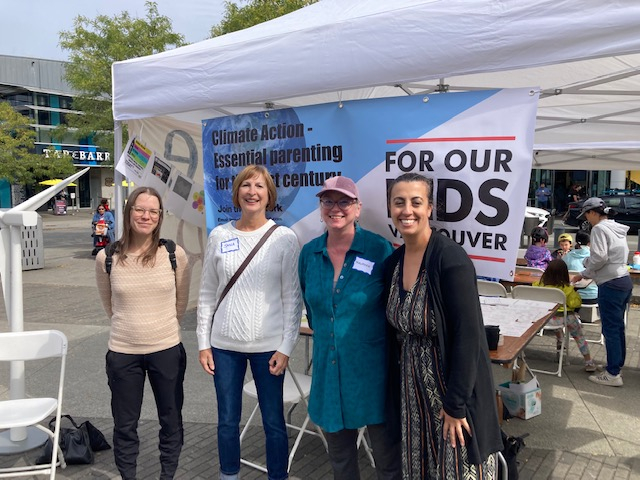 Jana MacDonald (second from the left) out raising awareness with the For Our Kids Vancouver team. Photo by Lorna Pelly
Previous story

Next week, Canada’s political leaders will be heading to COP27, an international conference at which the world’s nations meet to report on their plans to reduce emissions. During the conference, there will be a day dedicated to youth and future generations. Twenty-seven years since the first COP, the climate crisis is more severe than ever. The stakes for our kids have never been higher and the need for a strong, unified voice has never been more urgent.

As parents, as much as we wish we could look away to bask in our own memories of a care-free youth, it is not possible to ignore the immense consequences of a changing climate. Scarcity is on the rise: feeding our children is becoming harder as food costs soar, providing stable shelter is a struggle and accessing basic health care is now precarious.

On top of this is the magnifying glass of a fast-warming climate that’s putting more pressure on all those systems, while wildfire smoke presses against the fragile lungs of our kids and casts dark clouds over their hopes and dreams for the future. In the face of these heavy burdens, for parents, watching political games unfold is bone-chilling.

It has become all too common for elected leaders to prioritize short-term political wins over the interests of younger generations who can’t yet vote. This is an injustice to our kids: government decisions made today will determine whether they can plan on a safe, healthy and secure world tomorrow.

Alberta Premier Danielle Smith recently announced that Alberta will be sending a contingent to COP27. Sonya Savage, Alberta’s newly minted environment and protected areas minister, will be leading that delegation to “ensure Alberta’s voice is heard.”

This after Smith called for a “strong and unified Canada” while resisting the phaseout of Alberta’s oil and gas sector in her acceptance speech for the UCP leadership. For Savage, this presents a massive opportunity. She has the chance to commit, on a global stage, to working with the federal government to increase Canada’s ambitions and pivot to a clean energy future.

There is no shortage of solutions to implement, and young people are eager to take part in this transformational change. Imagine a society that harnesses the power of that youthful energy and love of the natural world.

There is no doubt that climate inaction will cost more than action. Recently, the Canadian Climate Institute concluded that the impacts of climate change will cost the Canadian economy $25 billion — every year. With this clear business case in place, we as parents cannot understand how acting on climate can remain a partisan issue. It is time to put politics aside and put our kids first.

In September, UN Secretary General António Guterres opened the UN General Assembly calling on nations to “work as one” to tackle the world’s crises, including the “defining issue of our time”: the climate crisis. Working as one starts at home. It's time for our political leaders to catch up with the rest of Canadians.

To Canada’s leaders heading to @COP27 and struggling with the “balancing of climate policy and energy security policy,” there's a force of parents to remind you what is at stake for the children, write @ClaireKraatz & Jana MacDonald. #ClimateCrisis

To Canada’s leaders heading to COP27 who may find themselves struggling with the “balancing of climate policy and energy security policy,” remember that there is a force of parents united across this country here to remind you what is at stake.

We are standing with our children, calling on leadership to make the right decisions for younger generations. Our unified force will not allow our children to be pawns in the politicking and greenwashing of the fossil fuel industry. It is time to get the politics out of climate, to work together as one and to govern for “people not profits,” in the words of the Youth Climate Strikers.

Our kids, of course, are the greatest source of unhindered imagination. So, to our representatives at COP27, we suggest you stop and take a walk through this year’s Children and Youth Pavilion. Draw inspiration from our children’s intellects — entirely unhampered by the status quo causing the destruction of the planet — and use it to courageously breathe life again into this big beautiful planet that is the only home our kids have.

Written collaboratively by a group of parents from Alberta and B.C., including Claire Kraatz, a parent and an organizer with For Our Kids, a national network of parents and grandparents working to drive urgent climate action. She leads a For Our Kids climate action group in Calgary.

Jana MacDonald is an artist, parent, grandparent and lead organizer with the For Our Kids Vancouver team.

Wonderful article and of

Wonderful article and of course it's the mothers of the world that might save us, the mothers and their precious children. Women are naturally allied with the earth; it's why we speak of "Mother Nature." There are theories about how that's why a certain type of man wants to dominate nature, to control it. Men are generally considered more "Apollonian," which is the basis of all religious doctrine....
Check out this link: https://cornwallalliance.org/
But "hell hath no fury like a woman scorned...."
Listening to Rachel Notley's address at the NDP convention, one of their proposals is to lower the voting age to 16, which is brilliant; it's time. Conservatives never even MENTION young people in their campaigning.
Bottom lines loom, so young people need to be politicized first and foremost about the dire, literally existential threat of the political right wing. ABC, anything but conservatives needs to become their mantra because that's the most important thing now, to keep them out of power, period. The U.S. is a massive and terrifying cautionary tale.
https://thetyee.ca/Analysis/2022/11/01/Americans-Turning-On-Democracy/?u...