Are at-risk fin whales in hot water from LNG and climate change? 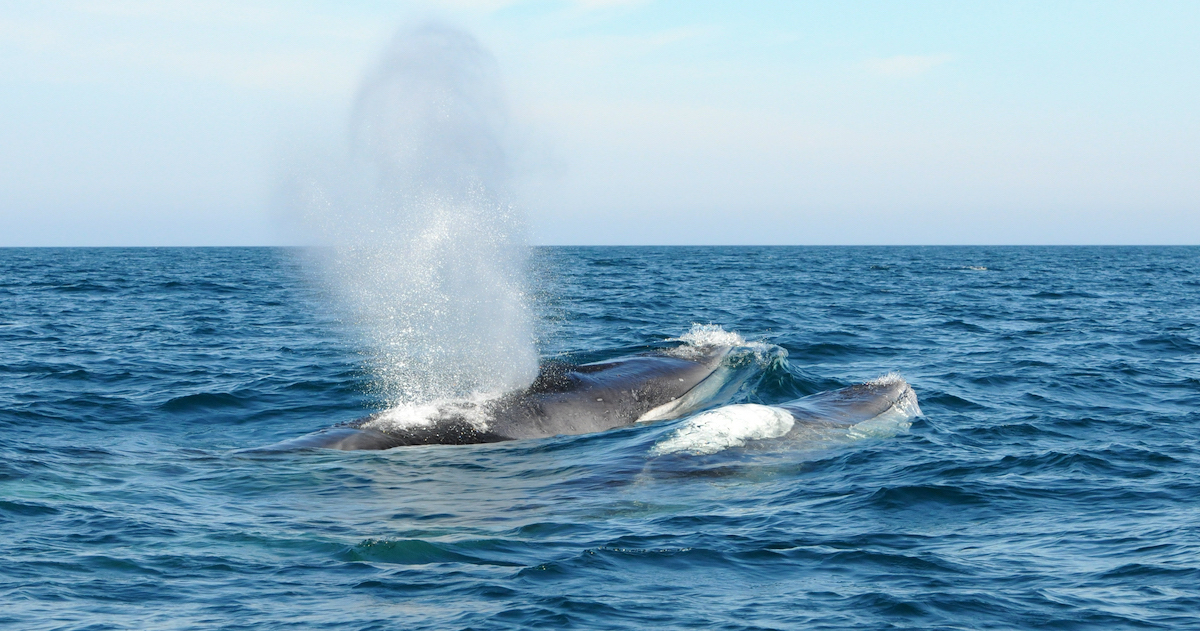 Conservation groups are alarmed that the status of fin whales as a threatened species on Canada’s West Coast is about to be downgraded just as the dangers of LNG shipping and climate change are on the rise.

The global population of the sleek, fast moving whale — dubbed the greyhound of the sea and named for the dorsal fin near its tail — was decimated by industrial whaling, which lasted until the1980s. Canada’s Pacific fin whale population was listed as threatened in May 2005 and was legally protected under the Species at Risk Act (SARA) the following year.

Fisheries and Oceans Canada (DFO) is asking for public feedback on the issue until Dec. 2, said Eric Keen, whale researcher and science director for the North Coast Cetacean Society.

But the dangers to fin whales in B.C. waters will mount, particularly for a unique population of the whales in fjords near Kitimat, B.C., when shipping traffic increases as the LNG Canada terminal comes online in 2025, Keen said.

Climate-induced marine heat waves pose further threats to the whales — potentially shifting where and how much food is available in coastal ecosystems. In 2015, an unusually large number of whales on the Pacific coast in the U.S and Canada died after a marine heat wave referred to as the blob likely triggered a toxic algae bloom that poisoned the massive marine mammals.

The combination of climate change, shipping noise and ship strikes poses an unprecedented threat to the whales, Keen said.

Fin whales on the cusp of losing threatened status

Although Pacific fin whales met the criterion for threatened status, it was reclassified because surveys in neighbouring U.S. waters suggest increasing populations and whales could immigrate and boost fin whale numbers in Canada, the COSEWIC report said.

Researchers are alarmed fin whales’ threatened status may be downgraded at the same time increased dangers from LNG shipping are on the horizon.

“A lot of science in the document is sound but what’s most confusing to me is (the committee’s) conclusions drawn from the evidence,” he said.

“They acknowledge the unknowns, but then conclude that it's appropriate at this time to reduce their status. And that's where I take issue.”

In particular, Keen’s not convinced U.S. populations will buoy up fin whales in Canadian waters.

Very little is actually known about fin whale populations in the Canadian Pacific and estimates suggest their numbers are only 30 to 50 per cent of what they were before they were devastated by whaling, he said.

Without their threatened status, the federal government’s obligation to identify and protect fin whales’ critical habitat disappears, Keen said. Fin whales continue to be listed as endangered in U.S. waters, with authorities prioritizing the reduction or elimination of deaths due to ship strikes or entanglement, and the protection of habitat essential to their survival and recovery.

Vessel strikes are the most significant human cause of fin whale deaths, particularly in shipping hot spots on both coasts, the report said.

But the severity and rate of fatal vessel strikes are hard to determine because most whales sink undetected in the ocean when they die, it said.

Fin whales, along with a number of other large whales, are particularly vulnerable to ship strikes, said researcher Jackie Hildering of the Marine Education and Research Society (MERS).

The recent deaths of a young humpback and a fin whale along the B.C. coast underscore the threat of vessel strikes and why more protection, not less, is needed for the whales, Hildering said.

There are significant data gaps cited in the COSEWIC report, Keen said, including population estimates for fin whales in the Pacific.

The committee also assumes that fin whales in B.C. belong to the same population as those found in U.S. waters and that a “rescue effect” from immigrating whales would take place, Keen said.

“The problem with that is that there's just no evidence that happens,” he said.

“We have no idea where these whales go in the wintertime and we don't know if they're connected to those American populations at all.”

Some research indicates there might be distinct populations in Canada and some whales frequent very specific areas throughout the year, he said.

It is a SARA requirement to identify critical habitat for species listed as threatened or endangered, but 16 years after making the threatened list, critical fin whale habitat has yet to be designated in Canada, Keen said.

A 2017 DFO science advisory report pinpointed the Greater Caamaño Sound and areas of the Hecate Strait and Queen Charlotte Sound in the waters between Haida Gwaii and the Kitimat fjord system as important habitat for the whales’ recovery.

Research led by Keen has identified up to 120 whales hanging out in a hot spot in the Kitimat fjord system — something found nowhere else in the world.

“They are usually thought of as an offshore oceanic species that never comes close to land,” Keen said.

“But this exception is making us see that there's much more to the species than we thought … and maybe these coastal habitats are essential to their full recovery.”

Though their peak periods of activity run from June to October, the whales use the area year-round for foraging and rearing young, and may be breeding and mating there too, he said.

LNG Canada predicts carrier ships — about the length of a cruise ship — to arrive almost daily once the system is fully online.

Ships will travel between 8 and 14 knots during peak whale seasons to reduce the threat of impact, LNG Canada said. Additionally, B.C. pilots, required to board ships to help navigate the last leg of a large vessel’s journey, will provide local knowledge on marine mammals, supported by information from local monitoring groups.

In September, DFO launched a one-year voluntary pilot project with guidelines to slow shipping along the proposed LNG route to improve water safety and reduce impacts to First Nations fishing and harvesting. But the presence of whales is also cited as a reason for ships to slow down.

Keen said the fin whale’s protection status should be maintained and its critical habitat protected before LNG shipping ramps up in three years’ time — ideally by minimizing shipping from July through September when whale activity peaks.

Having a concentrated area that provides vital habitat to fin whales is a mixed blessing, he said.

“These animals (gather) in one small area for a long period of time, which is great,” Keen said.

“But if you introduce a major development such as the shipping lane, it’s kind of a kill box that concentrates the impact on a really special population.”

This article was corrected to note that fin whales "may" breed and mate in the Kitimat fjord system.