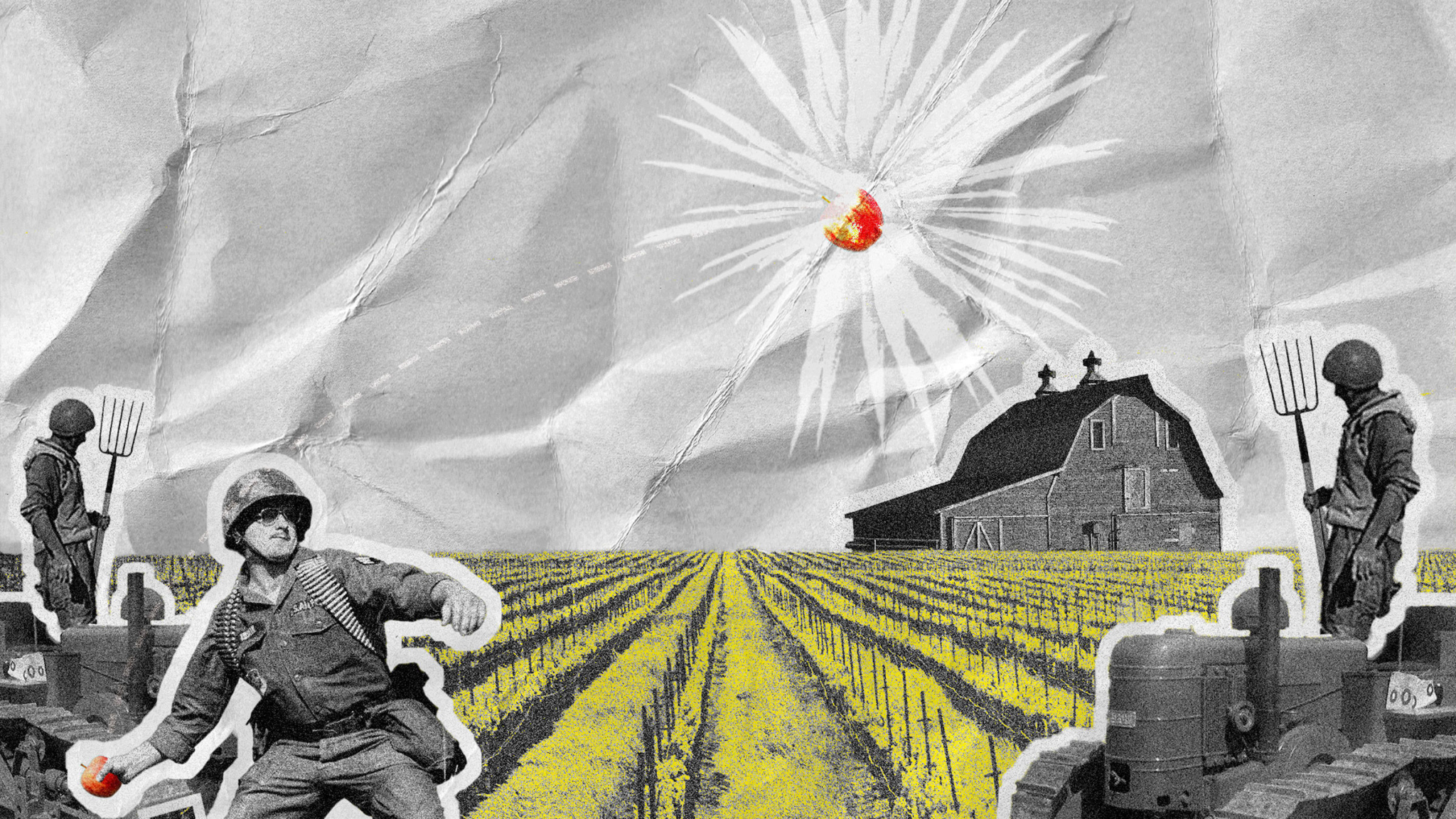 A new item is on the menu for the thousands of people gathering this month at COP27, the United Nations' annual climate conference: food.

The Intergovernmental Panel on Climate Change — a global group of experts who provide the gold standard of climate science — estimates that from farm to fork to compost, food is responsible for about a third of all greenhouse gas emissions caused by humans, in addition to contributing to pollution and biodiversity loss. Yet it has been largely overlooked at past climate conferences.

This year will be different. What we eat has been vaulted into the spotlight by soaring food prices and hunger as negotiators from around the world gather in Egypt. Russia’s invasion of Ukraine, supply chain chaos and extreme weather have exposed vulnerabilities in the world's food systems. For the first time, food and farming will feature prominently at COP27 as Big Ag, activists and governments fight over the future of what and how we eat.

Here's what you need to know:

What’s the biggest fight in the food world?

The battle between so-called climate-smart agriculture and agroecology. Agroecology is an approach to food systems and farming that seeks to reform how we produce, transport, sell and dispose of food to make it more ecologically sustainable and fairer to farmers, workers and vulnerable communities. Climate-smart agriculture is a tech-focused approach to reducing greenhouse gas emissions from farming that doesn't address social and economic disparities entrenched in how we grow and eat food.

The world's largest food and farming companies and their lobbying groups are advocating for climate-smart agriculture. Countries that rely heavily on food exports and industrialized farming systems — including Canada — have largely supported these companies' positions in international negotiations, advocating for the expansion of climate-smart farming. Critics say the approach will deepen the world's reliance on industrial farming, contribute to further environmental harm, erode the resilience of our food systems and hurt farmers and their communities.

Agroecology has received more support from many low- and middle-income countries and the European Union, which embraced the approach last year. Many academics, and civil society and environmental groups are also strong agroecology advocates, arguing it is the best way to tackle the interlinked problems of climate change, pollution, inequality and hunger. Critics of agroecology say it can't meet our demand for food and will hinder countries’ efforts to reduce poverty.

A new item is on the menu for the thousands of people gathering this month at COP27, the United Nations' annual climate conference: food.

Has food come up at previous climate conferences?

In 2017, the countries signed on to the UN Framework Convention on Climate Change (UNFCCC) decided to create the Koronivia Joint Work on Agriculture (KJWA), a series of workshops and discussions on agriculture that recognized its climate impacts and potential benefits. Koronivia is noteworthy because it addressed both adapting to and reducing climate change. The KJWA has leaned towards bolstering agroecological solutions to the climate crisis over climate-smart ones — including reducing global consumption of meat, a big emitter — earning resistance from countries like Canada that are vested in industrialized agriculture for export.

The KJWA's mandate is drawing to a close this year, and countries are expected to decide on its uncertain future. Moving forward, the agreement could shape how agriculture is addressed in the institutions and funding systems crafted under the UNFCCC. African countries are pushing for the KJWA to go in this direction, but developed countries are resisting because of concerns about costs, according to Ryan Hobert, managing director of climate and environment for the UN Foundation.

Moreover, last year, the U.S. and the United Arab Emirates launched the Agriculture Innovation Mission for Climate (AIM for Climate), an initiative that aims to boost investment in climate-smart agriculture globally. It has since gained support from 40 countries, including Canada, and aims to secure $8 billion in investments by the end of this month. AIM for Climate has been heavily criticized by environmental and civil society groups as a ploy to broaden the reach of major agribusinesses and industrial farming.

For the first time, there will be four pavilions at COP27 dedicated to food systems and food security; there were none at previous events. Pavilions are spaces in the main conference venue that host panels, presentations and other networking events. While they are not directly related to the official negotiations aimed at lowering countries’ greenhouse gas emissions, the pavilions are a place lobbyists use to spread their message to politicians and other conference attendees.

This year's pavilions are being run by groups supporting agroecology — the UN Food and Agriculture Organization, agriculture research group CGIAR, a coalition of tech-focused groups advocating for technologies like vertical farms or alternative meats, and representatives from the world's largest food and agrochemical companies.

World leaders will host two sessions on food security that will focus on how to increase farmers’ and the food supply’s resilience to climate change, how to reduce waste and finding funding to bolster more sustainable practices. Civil society groups will be calling for countries to support agroecological approaches to farming as part of their efforts to fund climate change adaptation. Only two per cent of climate finance is spent on food, land use, and nature, according to Food and Land Use Coalition Policy and International Engagement director Edward Davey.

Additionally, the COP presidency has dedicated half a day to food and agriculture — a first for a COP. This designation brings more attention to the issue and can also guide when governments or advocacy groups make new pledges about farming and climate.

After sheep, cows are the

After sheep, cows are the worst carbon emitters. Governments have been very hesitant to rule against raising of ruminants because it is such a traditional type of farming and the source of revenue for many farmers.

Consumers must start eating the the grains that are otherwise given as food to cows: much more efficient and less polluting. Manufactured meat may not be fully acceptable at the moment, but there is already a very acceptable substitute for animal milk.

I have been using a product called Next Milk that tastes and behaves surprisingly similar to cow milk. It is already available in supermarkets under the label of Silk, distributed by Danone in Canada. It is made with oats, coconut, soy and sunflower. So, rather than investing in methods to reduce emissions from cows or penalizing dairy farmers for emissions from their cows, the government should encourage the development of milk and meat substitutes.

Farming is a heavily

Farming is a heavily subsidized industry , our taxdollars. If these subsidies were used to help farmers change their crops and regenerative farming practices ALONG WITH EDUCATING PEOPLE TO EAT LESS TRANS FAT, ANIMAL MEAT AND DAIRY it would be a win win, win for our health, planets health, and reduce the unnecessary mass production of animals that suffer unthinkable cruelty to supply a product that is literally killing us, killing our planet. We consumers need to smarten up and stop supporting industries that are unethically making record profits because of THEIR greed and OUR lack of environmental facts and desire to create a healthier, kinder world for ourselves and our children.

In terms of the climate heating crisis, a key issue--indeed, the overriding issue--not mentioned in the article is animal-based foods.

The science is persuasive. Climate heating cannot be effectively addressed as long as human beings consume animal-based foods as they do now.

Too bad governments, including the Canadian, are loath to suggest to voters that they need to stop eating hamburgers, cheese, bacon, and fish and chips if they want a climate that will make civilization, as we currently understand it, functional.

If OUR Canadian government

If OUR Canadian government Would just push our recently updated national food guide it would encourage consumers to eat less meat and dairy. HOWEVER it seems the big farm corporate lobbyist (much like the oil comporate lobbyists) influence governmenti inaction of their own policy and recommendations. Much like declaring a CLIMATE CRISIS and then continuing to heavily subsidized with our taxdollars both big animal ag and oil companies. SADLY CORPORATE $$$ STILL TRUMPS SCIENTIFIC FACT/GOVERNMENT ACTION.

Let's dust off the idea of

Let's dust off the idea of eating close to home, which addresses all the transportation involved, which could ensure better methods since they would be visible and make better practices more enforceable. Let's take responsibility for our own regional food supply, not leave it to multinational agribusiness. Let's eat real food, not GMO, not manufactured food, food that really is produced regionally and eaten fresh. The list goes on. And most of all, let's stop letting multinational corporations of all stripes - be it windfall mining for lithium and so-called rare earth minerals, the fossil fuel industry reaping unprecedented profits while they destroy life, the agribusiness industry ditto - keep benefiting from dubious greenwashed solutions, while they harm life in so many ways.