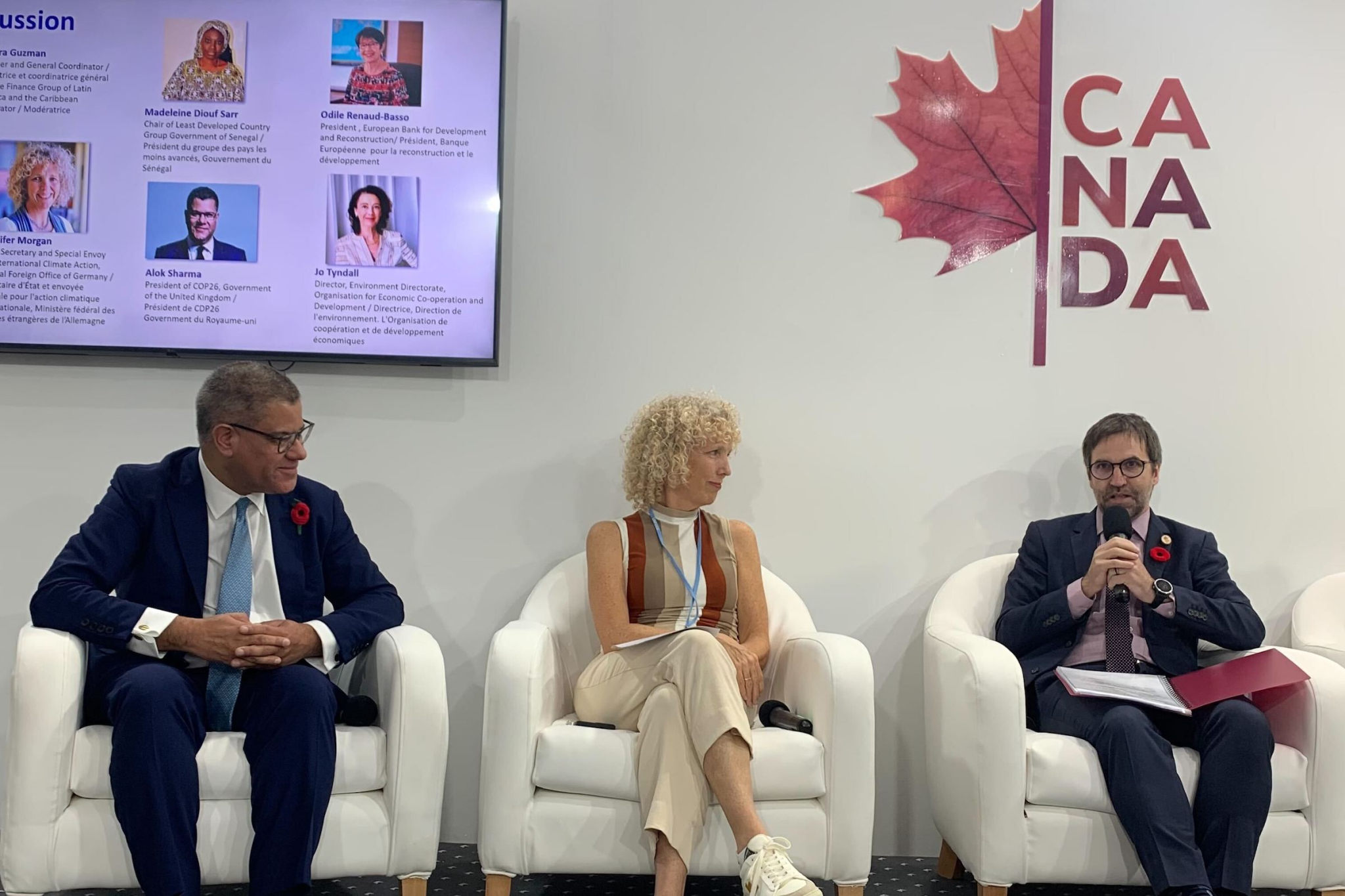 Canada is announcing millions of dollars in new climate finance for developing countries, but climate advocates warn symbolic donations are no replacement for the new financial tools delegates are currently negotiating at COP27.

The Global Shield was formally unveiled at COP27, but details about how it will work are scarce. World Bank president David Malpass — who came under fire earlier this year for dodging a question about whether he accepts the scientific consensus that burning fossil fuels causes global warming — launched the fund at an event Monday with German Chancellor Olaf Scholz, whose country put forward the idea. Scholz also pledged $170 million euros to the fund.

Environment and Climate Change Canada is branding its $7-million contribution as loss and damage financing, or money dedicated to compensating vulnerable countries for the climate disasters they experience. But Eddy Pérez, Climate Action Network Canada’s international climate diplomacy manager, told Canada’s National Observer it’s too soon to say whether that’s accurate because it’s not clear how exactly the money will be used. Previously, when Canada has announced funding for similar programs, it was money used to adapt to climate change, he explained.

“There's a realization that developed countries have been cheap, that their strategy has been oppressive and exclusive for years, and I think they're exploring ideas,” he said.

Canada is announcing millions of dollars in new climate finance for developing countries. But advocates warn symbolic donations are no replacement for the new financial pathways delegates are negotiating at #COP27. #cdnpoli

But Canada’s donation to the Global Shield “should not replace what we came to do here, which is adopt a fund (for loss and damage) at the end of the COP,” he said.

In international climate finance, there are three main conversations. Mitigation financing is money used to reduce global greenhouse gas emissions, for example by swapping fossil fuel-powered electricity with renewable energy. Money to prepare for damages from climate change that are already locked in, like building seawalls, is called adaptation financing. And money to compensate countries for the climate disasters that affect them, like the devastating flooding in Pakistan this year, is called loss and damage.

Pérez said the $7-million pledge from Canada shows a shift in how countries are thinking about the issue. At last year’s climate conference, the United States and European Union spiked a plan that would have created a loss and damage fund.

“A year ago, talking about support for loss and damage seemed like an impossible task, so that shift is there, but we're talking still about symbolism,” he said. “The needs are too high to just stick to symbolism, and it would be a mistake if Minister Guilbeault celebrated this $7 million as a major contribution from Canada when we saw the events happening in Pakistan cost $40 billion.”

Moreover, Pérez said the $7 million will go to an institution in Berlin, when it should be directly accessible to countries in the Global South.

Guilbeault said he understands many developing countries are looking at new financial mechanisms to provide loss and damage funding. Canada is open to that, he said, but before a new fund is launched there should be “a proper assessment” of the ways money is currently being deployed to better understand where the gaps are.

“If we identify there’s some gaps, what are the best ways to fill these gaps, and if it's creating new mechanism, I'm certainly not against it,” he said.

Guilbeault noted it took about seven years for the Global Climate Fund –– a UN financial fund helping countries bring down emissions and adapt to damage ahead –– to be operational.

“So to think… we can create new institutions at the UN level and that instantaneously they're going to start putting out money to help developing countries is very optimistic,” he said, implying that a faster way to get cash into developing countries’ hands would involve programs like the Global Shield.

The conversation on loss and damage financing is not the only fiercely debated international climate finance topic. Countries are also negotiating mitigation and adaptation money, as well as the role of grants and loans for developing countries looking to access funding.

Last year, when the United Kingdom hosted COP26, it tasked Canada and Germany with drafting a report that outlined when developing countries can expect to receive the $100 billion per year of climate finance they were promised by 2020. That $100 billion, currently focused mostly on drawing down greenhouse gas emissions rather than adapting to climate change, was a precondition for many countries to sign onto the Paris Agreement, the world’s current blueprint for climate action. The failure of rich countries to put up the cash they promised has created bottlenecks in international climate negotiations: some countries do not want to commit to more ambitious climate goals until the funding is available. It’s an especially timely debate as countries are discussing what the next funding target amount should be in Egypt.

Ahead of COP27, Canada and Germany published their plan for rich countries to belatedly make good on the $100-billion promise. Wealthy nations have provided about $83 billion as of 2020, the plan states, and they aim to reach the $100-billion mark in 2023. However, Oxfam challenged those findings, saying the “real value” of the funding provided is between $21 billion and $24.5 billion.

“Rich country contributions not only continue to fall miserably below their promised goal but are also very misleading in often counting the wrong things in the wrong way,” Nafkote Dabi, Oxfam’s international climate policy lead, said in a statement. “They’re overstating their own generosity by painting a rosy picture that obscures how much is really going to poor countries.”

Oxfam research suggests funding amounts are overstated because loans are counted on their face value, as if they were grants, without recognizing they must be repaid with interest.

“Our global climate finance is a broken train: drastically flawed and putting us at risk of reaching a catastrophic destination,” Dabi said. “There are too many loans indebting poor countries that are already struggling to cope with climatic shocks. There is too much dishonest and shady reporting.”

Morgan, the German climate envoy, told Canada’s National Observer the two countries used methodologies from the Organization for Economic Co-operation and Development and that both countries see them as credible. Still, “we can always learn and take a look at the Oxfam report to see where are those discrepancies, and always improve on how we're reporting,” she said.

The future of climate finance is a multi trillion-dollar question. A report commissioned by the U.K. and Egypt, hosts of COP26 and COP27, estimated countries are in need of $1 trillion annually in climate finance by 2030.

“Many of these institutions were put together decades and decades ago, and we need to make sure that climate risk is at the centre of all considerations and decisions we make,” Sharma said. “If we don’t do that, I'm afraid we are going to suffer. If we do it, we will see the trillions flowing.”

“Wealthy countries are stepping up their support and it's still not enough… No government in the world has enough money to get this job done,” he said. “There's no secret here. We want to take this idea and make it real and we want to make sure (the Energy Transition Accelerator) delivers finance at scale.”