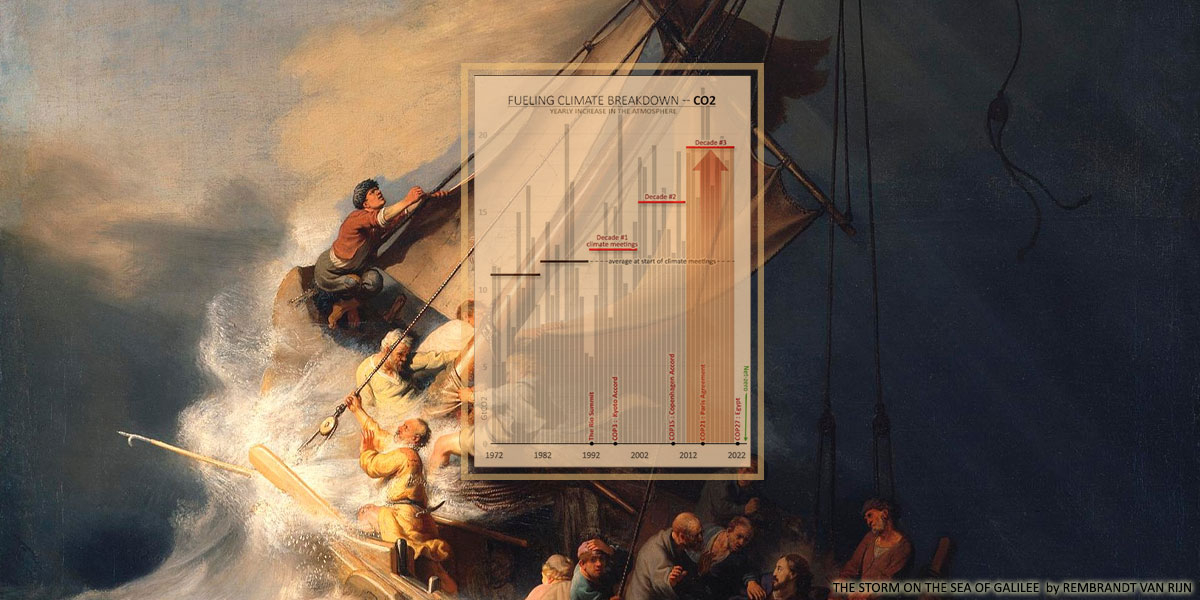 The world’s nations are gathering in Egypt this week to embark on their fourth decade of global climate meetings. The results from the first three decades — on the only scoreboard the climate pays attention to, the atmosphere — have been increasingly disastrous.

Atmospheric levels of all three major greenhouse gases — carbon dioxide, methane and nitrous oxide — are rocketing upwards, unchecked. Combined, they cause 90 per cent of global heating.

Here’s a climate-eye’s view of where we are today globally, and in Canada.

“The accumulation of CO2 in the atmosphere is irreversible on human timescales and will affect climate for millennia.” — World Meteorological Organization (WMO)

The rapid rise of CO2 in our atmosphere is the primary driver of the climate crisis and ocean acidification. Both crises will continue to grow more dangerous until CO2 levels stop rising. That point is called “net-zero” and it is literally the zero line at the bottom of my first chart below.

As you can quickly see, CO2 increases haven’t fallen towards zero as required for a stable and safe climate. Instead, CO2 levels have accelerated upwards, decade after decade.

And notice that the most extreme CO2 acceleration happened in the most recent decade. That record surge happened despite the marquee Paris Agreement and a global pandemic shutdown.

Global climate meetings started back in 1992, with the Rio Summit. Since then, the atmosphere has gained 475 billion tonnes of CO2 (GtCO2). For scale, that’s eight times the weight of all the solid waste trash humanity threw out over those years. It’s the equivalent of every human on Earth littering hundreds of fistfuls of plastic straws every single day during those 30 years.

Not only is CO2 humanity’s largest garbage stream, but it will take more than 100,000 years for the planet to remove all the extra CO2 we’ve piled up in the atmosphere.

That relatively calm and temperate climate many of us adults got to enjoy growing up — the one that human civilization blossomed under — is now gone. Cooked away. What we are collectively deciding, day by day going forward, is just how much more extreme we are going to crank up the climate misery.

Analysis: The world’s nations are in Egypt for their fourth decade of global climate meetings. The results from the first three decades — on the only scoreboard the climate pays attention to, the atmosphere — have been increasingly disastrous.

The second-biggest driver of climate change is the rise of methane (CH4) in our atmosphere.

As my second chart shows, methane has also been surging at record rates. And here, too, the most recent decade has been the most extreme on record.

In fact, more methane piled up in the atmosphere over the last decade than during the two previous decades combined.

And, troublingly, the last two years have seen record-breaking spikes.

According to the WMO’s most recent Greenhouse Gas Bulletin, the most likely driver seems to be a surge in emissions from biological processes, especially in tropical regions.

Potential sources for this include some that humans control, like rice fields and livestock. But there are other potential sources that are outside human control. One such possibility the WMO notes is that “microbial methane production in tropical wetlands is sensitive to shifting temperature and precipitation patterns, introducing a potential positive climate feedback.” Have we so shocked the climate system that this long-feared feedback loop has kicked in?

And, unfortunately for us, the climate doesn’t care where methane comes from. It just reacts to the amount in the atmosphere. Getting to safety requires “net-zero” methane additions to the atmosphere.

Nitrous oxide is accelerating, as well

The third-largest driver of climate change is the rise of nitrous oxide (N2O) in our atmosphere.

My third chart shows that nitrous oxide levels have also been accelerating upwards, decade after decade.

And again, as with CO2 and methane, the most extreme increases happened in the most recent decade.

And, similarly to methane, the last two years have seen record-breaking surges.

In this case, scientists have a much better understanding of what’s causing the rise in N2O — the rising use of nitrogen fertilizer around the world.

Canadian emissions vs. our peers

Canada, sadly, has the worst climate pollution record among our Group of Seven (G7) peers.

G7 members are the world's largest advanced economies, producing half of global GDP. These are the nations with the most resources, talent, technology and capacity to implement the required climate solutions.

Here’s a quick overview of how Canada compares to our G7 peers on each of the three main greenhouse gases.

Every G7 nation has managed to at least lower their CO2 emissions below 1990 levels — except Canada.

Leading the CO2-cutting pack has been our Commonwealth peers, the British. They’ve nearly cut their CO2 emissions in half. The European Union has collectively reduced its CO2 pollution by a third. Heck, even the Americans have been reducing their emissions for decades now.

Canada, however, still emits far more CO2 than we did back in 1990. And the gap with our G7 peers continues to grow wider. You can see this clearly on the chart above by looking at the trends during the last decade, before the temporary one-year pandemic drop in 2020. All the other nations were reducing emissions during the last decade, while Canada was cranking ours still higher.

As Bloomberg News recently reported, every G7 nation has also reduced methane emissions well below 1990 levels — except Canada. The Americans cut theirs by 25 per cent; the Germans and British by 50 per cent.

World Bank data shows that all the G7 nations have also reduced their N2O emissions below 1990 levels — except Canada and the U.S.

Canadian emissions are three per cent higher. But this understates our challenge. That’s because Canada got a huge, one-time, nitrous oxide reduction in the late 1990s when our nation’s only adipic acid factory closed. Surprisingly, that obscure factory shutdown remains Canada’s third-biggest greenhouse gas reduction so far.

Canada has been promising to reduce our climate pollution for 34 years. Way back in 1988, the Mulroney government pledged to cut Canadian emissions 20 per cent by 2005. Instead, Canada increased emissions 25 per cent.

As a result, the task facing Canadians has grown ever larger while the time to do it in keeps shrinking. That’s forced Canadian politicians across the political spectrum to commit to ever-steeper climate targets.

For example, our early targets — like the Chretien government’s Kyoto target and the Harper government’s Copenhagen target — required annual cuts of around seven MtCO2 per year.

Later targets — like the Harper government’s Paris Agreement and 2050 targets — required cutting twice as much each year.

And then, after years more of rising emissions, Canada’s latest targets — the Trudeau government’s “net-zero” and enhanced Paris targets — now require cutting four times more per year than our first targets did.

And yet we still aren’t cutting our emissions as required to stabilize the climate. Continuing to climb ever higher up the climate cliff as the climate storm clouds grow more ominous and threatening isn’t going to end well for Canadians. Our window to turn around and start climbing down to safety is closing fast.

Meanwhile, back in Egypt, the global climate conference — formally known as the 27th Conference of the Parties, or COP27 — is now being openly sponsored by fossil fuel companies. At last year's COP 26 in Scotland, the fossil fuel industry sent 500 delegates — more than from any nation.

With the foxes swarming the hen house and all three of the major greenhouse gases accelerated upward unchecked, it’s no wonder the younger generations have taken to the streets, sports stadiums and art galleries protesting. They’re looking for some way to save themselves from the increasingly dystopian climate future that adults are locking them into. As David Attenborough put it: "We have let down the young generation, and they know it, and they are angry."

In his opening speech at COP 27 on Monday, UN Secretary General António Guterres was blunt about the reckless path we are on: "We are on a highway to climate hell with our foot on the accelerator... Our planet is fast approaching tipping points that will make climate chaos irreversible... We are in the fight of our lives and we are losing."

It's long past the time for Canadians to join the fight, live up to our climate promises, and rapidly crank down our oversized climate pollution.

Thank you for this article Barry. As usual, your stats and graphs make things very clear. It's hard not to get depressed about this.

Saxifrage is brilliant, but

Saxifrage is brilliant, but let's not get depressed, let's get angry.
Paul

Only baby steps when we need

Only baby steps when we need Giant steps. Nonfiction book published 2022 worth the read, but do not read at bedtime. NOMAD CENTURY BY GAIA VINCE will open your eyes. Combine that with the fiction of author David Wallace-Wells and his THE UNINHABITABLE EARTH and be ready for some serious thinking

I find my neighbours seem to

I find my neighbours seem to believe that Canada is "doing enough already" in re climate change.
Everyone's got their own pet scapegoat (China, India, the US).
Media coverage of our "big splash" at the Paris talks made us look like climate leading heroes, when even then we were laggards and sluggards. Far behind and so lazy as to lie instead of rolling up the shirtsleeves.
Everyone cheers when our "goals" improve ... not understanding that we are moving the goalposts, not improving our score. It can't be otherwise,
As long as we operate on excuses, lies, cheating ... and denial in the face of findings to the contrary, that's how it'll remain.
One thing the charts make clear is that our named targets are ever-increasingly farther from even our admitted emissions,
Now with real-time global emissions maps, the gap between reality and "official stats" should be shrinkable. But, oh dear, that'll also make it clear our emissions are even higher than what we've admitted to.
I can't wait for international carbon tariffs to be imposed on bad-actor sectors' sales.