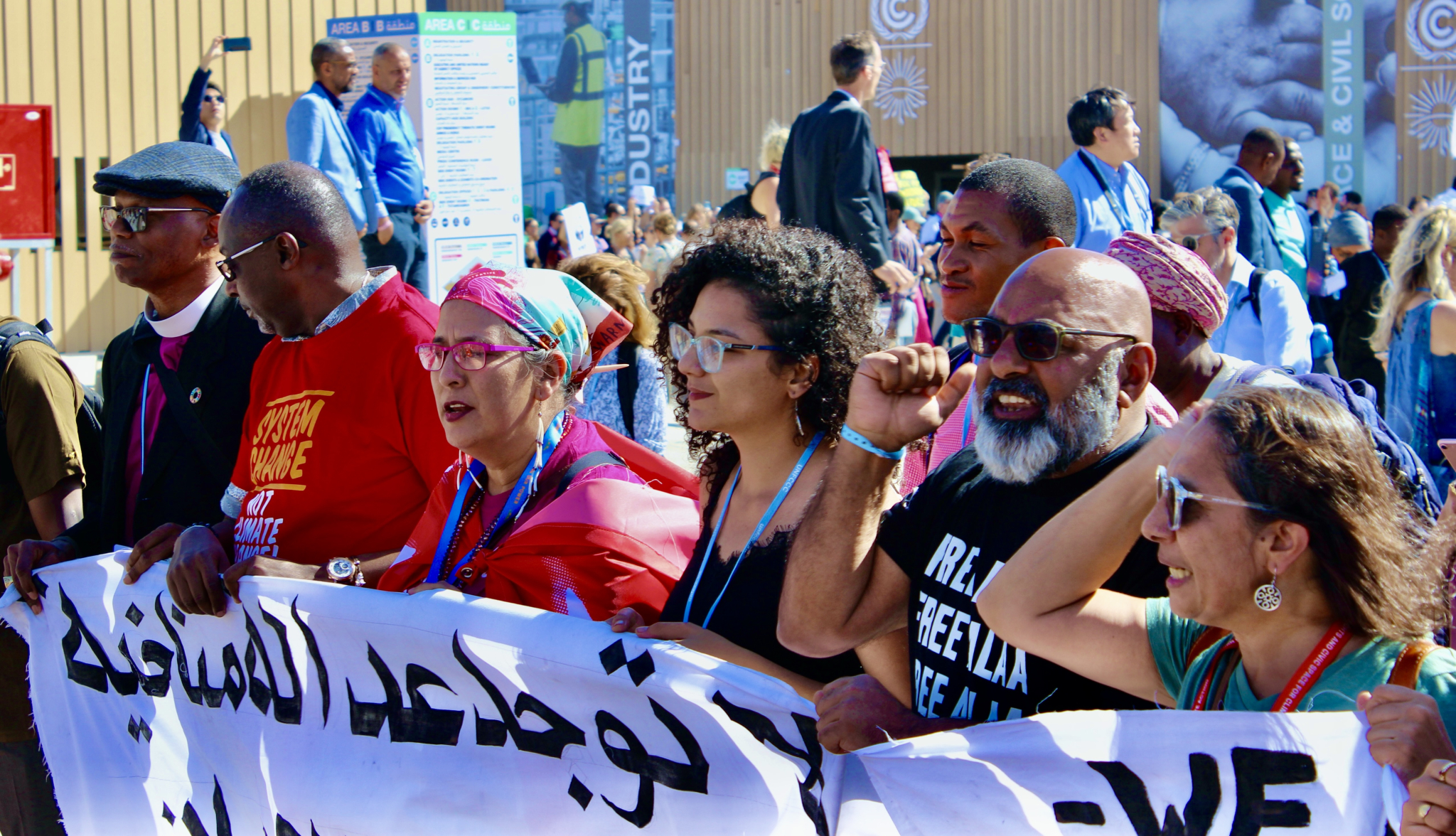 As COP27 draws to its end in Sharm el-Sheikh, Egypt, the link between climate action and human rights has rarely, if ever, been as palpable at a United Nations climate conference.

On Saturday, climate and human rights activists staged an unprecedented large-scale march through the COP27 venue. Protests at COP meetings are common, but they usually occur outside the venue in the streets of the host country. In Egypt, protest zones were set up far from the venue and largely rejected by activists. Instead, civil society groups negotiated with the UN to safely demonstrate inside the venue.

The demonstration saw a wide mix of activists. Protesters from all corners of the world advocating for climate action, Indigenous rights, disability rights, workers' rights, an end to patriarchy and colonialism, and more were present in a show of solidarity with British-Egyptian writer Alaa Abd el-Fattah, who is currently imprisoned in Cairo.

Abd el-Fattah was a major pro-democracy figure during the 2011 Egyptian revolution and has spent most of the past decade behind bars. In April, he began a hunger strike to protest his conditions, and as COP27 began, he escalated it, refusing to even drink water. On Saturday, he wrote to his family to say he was ending the strike.

This week, Abd el-Fattah celebrates his 41st birthday. In the letter, he asked his mother to bring cake.

His sister, Sanaa Seif, shared the letter on Twitter and confirmed it is his handwriting.

In a statement Thursday, Abd el-Fattah’s family described speaking to him through a glass barrier with a faint headset, where he told of being pressured to submit to medical examinations. He said he told authorities he would only be willing to submit to an examination if it would be on record that he was on a food and water strike.

“They instead brought plainclothes officers to intimidate him, but he refused to leave the medical centre, so a riot squad was brought in to carry him out,” the statement reads. “As he was being carried out, he ‘lost it,’ had a meltdown and promised to kill himself if he was taken back to the cell.

“When they put him in the cell, he started to smash his head against the wall. He was restrained and tied down. The cell was put on suicide watch.”

The statement goes on to say that he repeatedly smashed his head against the wall the next day until he drew blood, forcing authorities to file an official report and bring in an investigator. Two days later while in the shower, he collapsed, the statement says. As he tried to dress himself to call for help, he fell unconscious.

The link between climate action and human rights has rarely, if ever, been as palpable at a United Nations climate conference. @woodsideful reports from #COP27 #HumanRights #ClimateCrisis #ClimateJustice

“When he came to, he was surrounded by people and his head was cradled by one of his cellmates and there was a cannula (thin tube) in his body, which gave him a lactate solution and glucose,” the statement says. “Then they gave him electrolyte fluid, a spoonful of honey and a pickle.

“This is how the hunger strike was broken.”

He remains in prison.

Seif was at the protest at COP27 on Saturday. She was visibly overcome with emotion by the show of solidarity, and so rather than deliver a speech herself, she asked that her statement be read aloud by War on Want executive director Asad Rehman.

“I came here thinking I would be alone, and I'm sure those in power thought my voice would be drowned out and ignored. Instead, I found my family was already here waiting for me,” it read.

“A family of sisters and brothers from every corner in the world; workers, feminists, youth activists, Indigenous sisters and brothers, climate justice warriors. And with open arms and open hearts, you've lifted up my voice, lifted up our call for justice, that none of us are free until we are all free.

“Your actions have turned the slogan ‘There is no climate justice without human rights’ into a reality. I will return to Cairo to stand alongside my mother at the prison gates, but I will not return alone. The whole world knows that all of you are there standing alongside me.”

At a press conference last week, Seif was heckled by an Egyptian politician who was escorted out of the room by UN security. Later speaking to reporters outside, Seif called on western governments to change their relationship with Egypt.

“These relationships are not in the benefit of the people. Not our people, not your people. I'm sure your citizens have better use for your tax money than military aid to Egypt,” she said. “You have been complicit for too long in our oppression.”

Trade between Canada and Egypt was worth $1.9 billion in 2021, with Canadian exports totalling $627 million. Canadian firms are deeply invested in Egypt’s petrochemicals and oil and gas sectors, according to Global Affairs. Last year, arms exports to Egypt totalled just over $55,000 according to Global Affairs’s 2021 arms exports report, representing a small fraction of the $2.7 billion exported in total.

“World leaders and delegates visiting Egypt for COP27 must do everything in their power to pressure the authorities into immediately releasing Alaa and to speak out publicly that they expect nothing short of his unconditional release,” said Amnesty International’s secretary general Agnès Callamard in a statement.

Global Affairs said it was closely monitoring Abd el-Fattah’s case and that freedom of expression is a fundamental human right.

“We take this issue very seriously and Canada will continue to lead global efforts to protect journalists, media workers, and freedom of expression, including through multilateral forums such as the UN and the Media Freedom Coalition, co-chaired by Canada and the Netherlands,” a spokesperson said.

“Canada has conveyed and will continue to press the need for further prisoner releases, civil society participation, and the importance of freedom of expression and media freedom to COP27 president, Foreign Minister Sameh Shoukry, in the context of the conference and through other official bilateral channels.”

In an interview with Canada’s National Observer, veteran climate activist Bill McKibben said there’s a “completely natural synergy” between human rights and climate justice. He said one of the reasons he attended this year’s COP was to call attention to Abd el-Fattah’s case after being inspired by his longtime friend and colleague Naomi Klein who wrote about it ahead of the conference.

“One of the reasons we're fighting for a workable climate is so that we do not have conditions on this Earth so chaotic that the world automatically descends into a world of dystopian authoritarianism,” he said. “Past a certain point, if there's a hurricane every 45 minutes … people are going to have strongman governments.”

“And so if we lack the human rights to put pressure on those governments/industries, then the ability to achieve the rapid pace of decarbonization we need is called into question.”

McKibben said he thinks this is the first COP hosted by what’s “more or less a police state,” and it wasn’t lost on him that security followed him around while wearing his “Free Alaa” T-shirt. He called Abd el-Fattah’s case a powerful example of human rights injustice and a reminder that authoritarianism is a major obstacle to bringing down global emissions.

The world is a more authoritarian place today than it was when the Paris Agreement was signed, he said.

Russian President Vladimir Putin had already invaded Crimea when the Paris Agreement was signed, but has since adopted an even more aggressive posture, he said. And there are many other examples.

“(Chinese President) Xi Jinping was still viewed as somewhat of a reformer and opening up systems instead of closing them down… Modi has taken India in very desperate directions, from a human rights and political activism standpoint,” he said. “We've survived the Trump years in America, and the Bolsonaro years in Brazil, and those systems have — knock on wood — managed to re-equilibrate to one degree or another,” McKibben said.

But “we're in a world where a large percentage of the population and some of the most important countries in terms of coming climate action are not places where activism is even really possible,” he said.