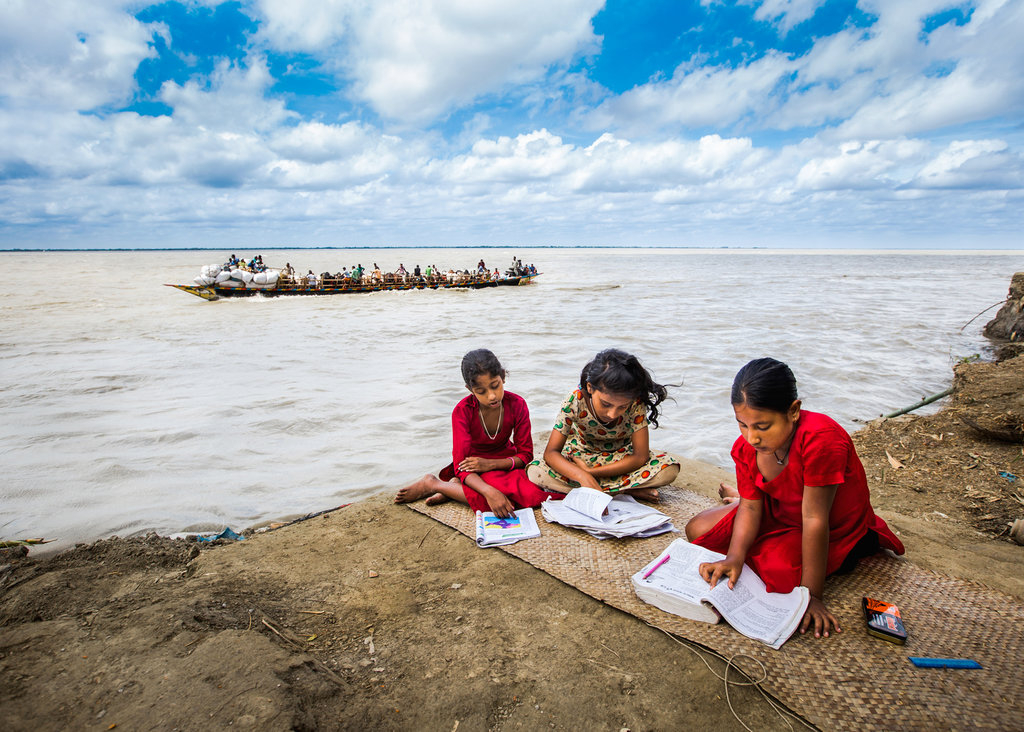 The education of students in Gabura Upazila, Bangladesh, is facing uncertainty as their school is under threat of being washed away. Photo by Moniruzzaman Sazal / Climate Visuals
Previous story

The clock is ticking to land an agreement for COP27, and Environment and Climate Change Minister Steven Guilbeault says Canada will support a proposal to launch a loss and damage fund — with a few conditions.

The European Union tabled a proposal looking to establish a loss and damage fund late Thursday, which Canada largely supports. Despite being debated for decades, this is the first year loss and damage — or compensation for countries suffering from the impacts of climate change — was on the official agenda. Passing a fund is considered by many countries and civil society groups as a litmus test of whether the United Nations climate conference will be a success.

The exact language is under debate, but Friday evening, Guilbeault outlined the essence of the plan and confirmed Canada agrees to the creation of a loss and damage fund.

“We believe the fund should include all large emitters,” he said, adding countries that otherwise would be left out, like China, which has the second-largest economy in the world, should pay into the fund, too.

Guilbeault said the world has changed tremendously over the past 30 years since the first UN climate conference took place, and new programs, like a loss and damage fund, should reflect how countries have developed since then. Without recognizing this, he suggested countries that are now economic powerhouses wouldn’t be paying their fair share under existing UN definitions of developed and developing countries.

This is the vocabulary battle playing out in the negotiating rooms at COP27. Should a loss and damage fund be financed by “developed countries” for “developing countries,” or should “large emitters” pay into a fund for the “most vulnerable”?

Guilbeault said the large emitter category of countries should include countries like China, Saudi Arabia and Qatar that “not only are large emitters but have much higher standards of living than they did when the Rio Convention was adopted in 1992, when we separated countries into the developed and the developing world.

Close climate diplomacy watchers have criticized the move to redefine who should pay as a divide-and-conquer strategy aimed at defeating a separate loss and damage plan. That plan — put forward this year by the G77+China, which represents 134 countries and is the largest negotiating bloc — would create a “transitional committee.” That committee would have representatives from 15 developed countries and 20 developing countries on it to hash out what a fund could look like.

Critics say wealthy countries have attempted to split the G77+China by proposing the base of donor countries be expanded to include countries considered to be “developing” but that have economic power and contribute significantly to global greenhouse gas emissions.

The clock is ticking to land an agreement for COP27, and Environment and Climate Change Minister Steven Guilbeault says Canada will support a proposal to launch a loss and damage fund –– with a few conditions. #COP27

It’s a strategy that seeks to peel major economies like China away from their developing country allies by asking China to pay more into any possible fund than it would under current arrangements, critics say. It can also be seen as an attempt to convince the most vulnerable members of the G77 to split from their middle-income peers by offering them access to funds they need.

At a press conference Friday morning, Tuvalu Finance Minister Seve Pailu said he saw the EU’s shifting posture to support a loss and damage fund, unlike previous years, as an important step.

“That is a major concession, and a major breakthrough, and at least our hope (is) that that will be ... in the text of the cover decision,” he said.

Climate Action Network Canada international climate diplomacy manager Eddy Pérez told Canada’s National Observer it’s fine to have a conversation about who should pay into a fund, but it’s a bad look to make that a condition for progress.

Pérez said it was good to see the EU softening its position by agreeing there should be a loss and damage fund in the agreement, and it’s important for countries to recognize the effort, but ultimately the EU “is not acting in the best interest of the vulnerable countries.”

“Canada has been playing a constructive role, open to all solutions, nowhere in the same place as the United States,” Pérez said. “The blockers are the United States right now, you have Japan, and potentially even Australia.”

Pérez said U.S. efforts to split China and its allies could backfire and instead push China into more of a leadership role. As countries near the end of COP27, the “United States (is) being isolated,” he said.

As negotiators head into the home stretch, the first draft of the agreement, which surfaced overnight Thursday, shows countries backsliding from commitments made last year in Glasgow. While climate advocates say the text has some tentatively positive signals buried in the draft, including references to holding global warming to 1.5 C and a just transition away from fossil fuels, it’s also packed with loopholes, weasel words and vague commitments. Critically, the first draft has rejected a demand from many countries to see strong language on phasing down all fossil fuels — something climate scientists say must rapidly happen to avert catastrophic global warming.

Without massive improvement to the working draft in the coming days, the conference will be branded a failure, civil society groups and countries on the front lines of the climate crisis say.

“The major outcomes of this COP are hinging on two issues: the phaseout of all fossil fuels and the provision of finance to loss and damage so countries can finally address the enormous impacts that they are facing in the climate crisis,” said Catherine Abreu, executive director of Destination Zero. “Canada has not shown up very well on either of those issues in the past.

“At this point, (Canada is) doing a little bit better on loss and damage, and it's good to see our minister promising new means of support to loss and damage … but we also want to see Canada finally get on board with the recognition that in order for us to meet our climate goals, –– to limit warming to 1.5 degrees, to get to net-zero by 2050 –– we are going to have to have that conversation about the future of our oil and gas sector,” she said.

Thanks for explaining the

Thanks for explaining the complexities of this topic so clearly.