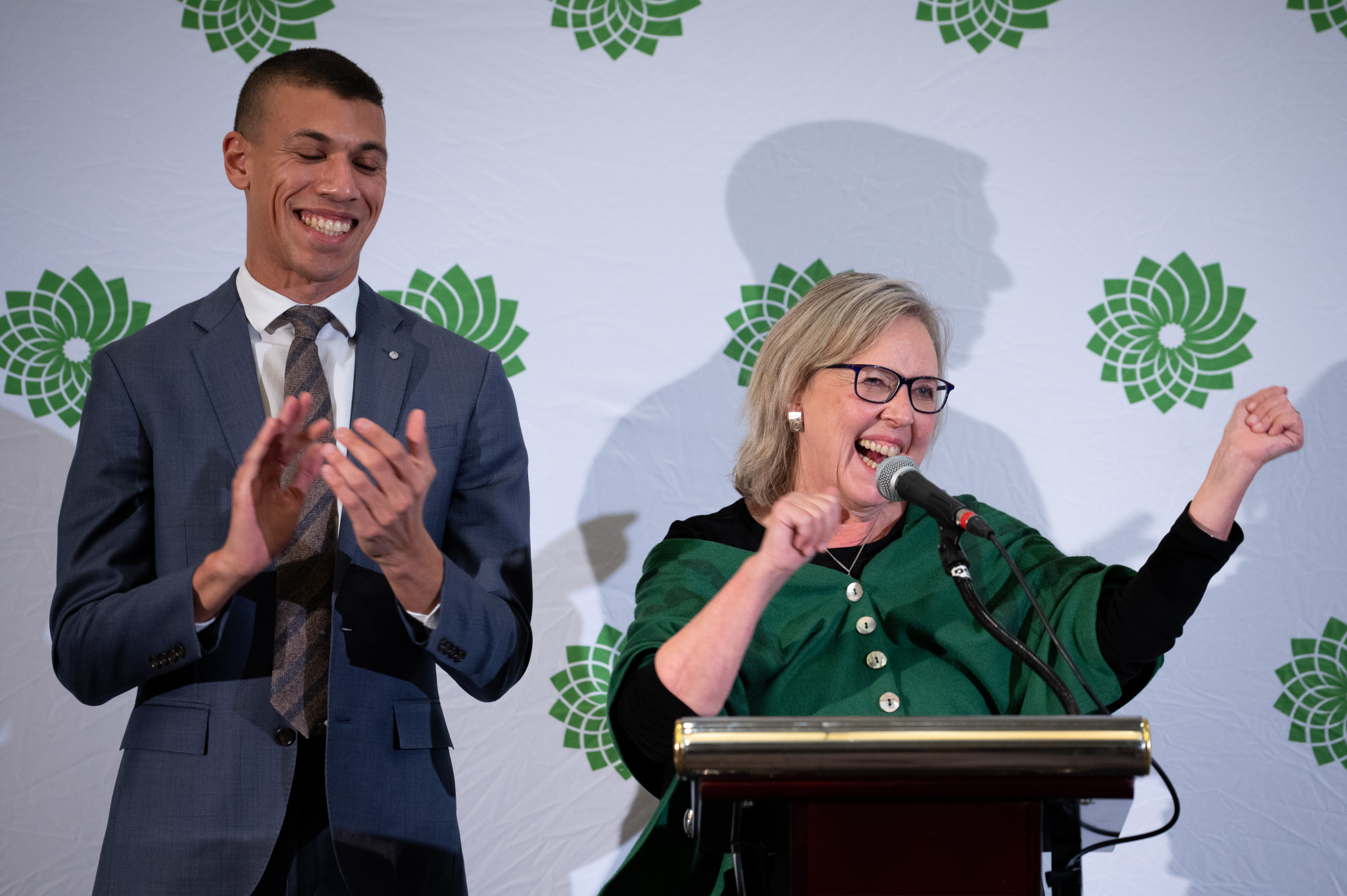 “The party is still under the black cloud of the Annamie aftermath,” Camcastle said.

However, a new leadership model championed by some candidates also could have muddied the waters, she said.

Roughly 8,000 of an eligible 22,000 members voted in the leadership race. This pales in comparison to the 2020 race when over 24,000 members cast a ranked ballot and elected Paul. Interim leader Amita Kuttner announced the results in Ottawa at the election night watch party on Saturday.

This time around, former party leader Elizabeth May won on the sixth and final ranked ballot with 4,666 votes. P.E.I.’s former Green Party president Anna Keenan came in second with 3,089 votes.

At the end of the day, May was the preferred choice, but Keenan’s solid base of support indicates “there was a substantial number of people who were looking for an alternative,” said Donald Desserud, a professor of political science at the University of Prince Edward Island, in an interview with Canada’s National Observer.

“(Keenan) has a role to play in that party in the future, for sure,” said Desserud.

This race looked different from previous ones. Both May and Keenan opted to run with a “co-leader,” even though the role does not yet exist under the Green Party’s constitution. May ran for co-leader with 32-year-old Jonathan Pedneault, a Montreal resident and expert on crisis situations, who came third with 969 votes in the fifth round. Keenan’s running mate, Chad Walcott, was eliminated in the fourth round with 665 votes.

Low voter turnout in its leadership race reflects the multiple challenges the federal Green Party has faced in recent years: “The party is still under the black cloud of the Annamie aftermath,” said political scientist Cara Camcastle. #cdnpoli #GPC

Camcastle said she is “fascinated” that Pedneault is set to be co-leader — pending a constitutional change — with a small portion of the vote and having never run for office with the party.

“If I were May, I would appoint Anna Keenan as a deputy leader,” said Camcastle. Keenan remained a strong second throughout all six rounds.

The concept of co-leadership is likely foreign to most Canadians, regardless of their party affiliation. The Green Party of Canada is unlike traditional parties; its roots in democratic, grassroots decision-making mean party members must reach consensus to decide on policy, said Camcastle. Co-leadership is another concept outside the mainstream, but it has been adopted by the Greens in New Zealand (the first country to use this model), Camcastle pointed out. Germany, Scotland, Australia and the United Kingdom have also successfully used the co-leader model, May told Canada’s National Observer in August.

Camcastle said it's a smart move for candidates to team up like this because people of different races, genders and backgrounds have a greater opportunity to be represented. This model also allows leaders to cover more ground by being in two places at once and thus garner more media attention, a 2017 case study on the New Zealand Green Party’s co-leadership system explains. A drawback noted in the paper is that political staff and media would sometimes try to drive a wedge between the co-leaders by petitioning whoever was deemed more sympathetic to a position, making strong communication key for this model.

But Camcastle wonders whether the membership fully understood what it meant for candidates to run as co-leaders. With some candidates running together and some separately, perhaps a lack of clarity had an effect on voter turnout, she mused.

Desserud, for one, says he is “mystified” by candidates pursuing the co-leader model. Appointing a deputy to share responsibility makes sense, “but at the end of the day, a leader is not someone who just (has) the title ‘leader,’ the leader is the person who people listen to,” he said.

One person will be making the decisions and the other will be accepting those decisions, and the latter, no matter what their title, is effectively a deputy, said Desserud.

“You can make it look like it's co-leadership, but that only works when they both agree … there's absolutely no way, human nature being what it is, that they're always going to agree, or if they do always agree, it's because one person is agreeing to agree, which is not the same thing.”

The federal Green Party has “been through a lot,” said Desserud. He thinks May’s co-leadership bid with the youngest leadership candidate was a way to signify a new way of doing things, embrace more diversity in its leadership and attract younger voters. Paul was the first Black woman to lead the Greens and both during and after her resignation, there were allegations of racism, sexism and other discrimination from within the party.

“It doesn't surprise me that they're having a hard time getting excited about coming back to the party and participating in a leadership (election).”

However, unlike the larger parties, the Green Party doesn’t have far to fall, said Desserud.

“Yeah, it's bad. This is the bottom, I suppose, and now they will start working back up again,” he said. “But they weren't way up in the stratosphere in the first place so, in relative terms, it’s not nearly as big of a deal as what happened, for example, to the (Progressive Conservative) party federally back in 1993. That was a monumental collapse. In the long run, this will be a blip.”

Despite ups and downs, Desserud said there's no reason to believe the Greens can't come back up again, but to do so, they must work at “being clear, competent and showing that they're grownups in the room that know what they're doing.”

Before everyone goes on & on

Before everyone goes on & on about this election and the low turn out I just want to comment on one simple fact. I have Elizabeth as an MP & truly believe she has been the most responsive, supportive and honest politician I have ever encountered in my 75 years. Me & my husband have been Green Party members for years & we get all the e mails whenever they come out. EXCEPT for this vote!! It took me several phone calls and e mails to try & actually get the ballet. We are not particularly tecky and even had to change my e mail address…..to finally get the ballet, but only one. SO the voting “on line” sucks, in my mind. What happened to going to an office, getting a piece of paper & marking an X?? Yeah, that Elizabeth & Jonathan won. Cheerio from Salt Spring island BC

How strange. Like you, I receive all the emails and had no trouble at all learning about the candidates, with links to their web site, and received the ballot.

I found the concept of co-

I found the concept of co--leadership very confusing... who goes to the leaders debate in an election, who gets up to speak in Parliament, is this dual leadership recognized by the Canadian constitution? Hard to picture..... for me and apparently many others.

As a regular donor to Green

As a regular donor to Green parties - but also a passive observer, I waited for the movers and shakers to get their act together. I didn't vote because I could not find the pages, (if they existed) that told me something about the candidates. No doubt this was my fault having lost my appetite for foraging and scrounging around the internet. Would have voted for Ms May, in any case, as a known and largely trusted entity who has almost always thought and acted with considered, judicious probity.

Complaints about unconventional leadership terms/roles is a symptom of our deteriorated ability to think, to imagine. We complain about the inequity of the first past the post mentality, but turn around and complain about efforts to spread a party's diversity, to engage more talents, and advance a party's relevance to the electorate. Ms May resigned her previous leadership - possibly because she despaired of being the only recognized speaker for the very many people who shared her beliefs, but who would not, or could not support her in more substantive ways. Co-leadership is a possible path to raising the profile, to end the echoing chamber of only one voice speaking up.

Let those without sins of omission, cast the first stones. The resounding silence seems to say it all. Green? or Not? make your voice heard, Do something admirable before you die.

Betsy, let me assure you that

Betsy, let me assure you that the pages surely existed. As a GP supporter, it is baffling that you could not find them.

Everybody concerned about the

Everybody concerned about the Green Party management and organization should read this article from The Intercept, last June:
https://theintercept.com/2022/06/13/progressive-organizing-infighting-ca...

The "Green Party vision" needs to become much more practical, and less ideological.