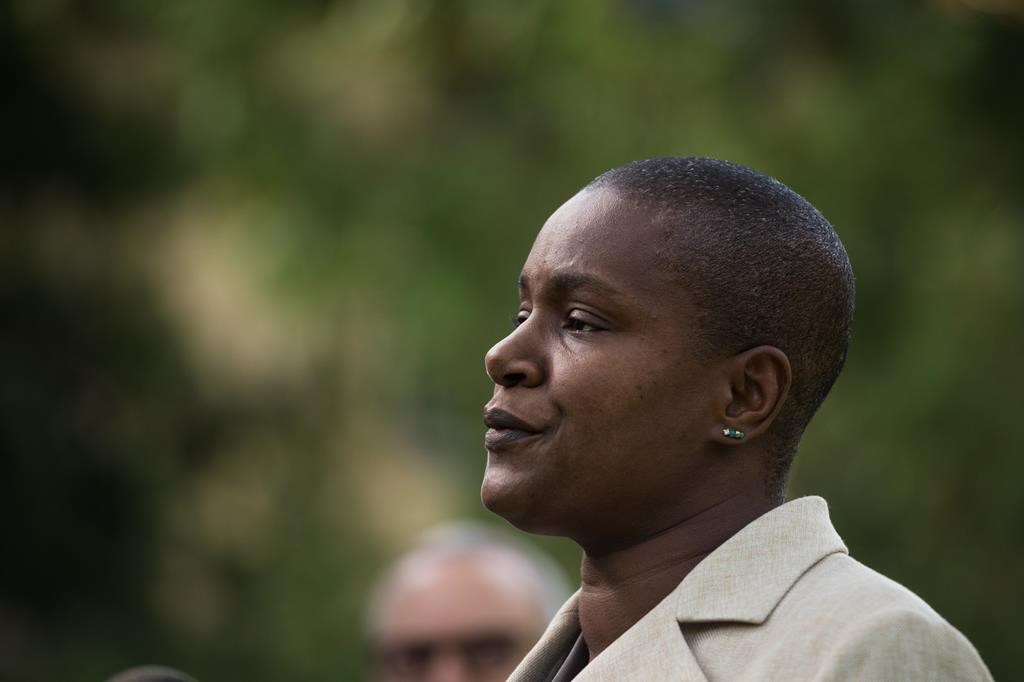 Annamie Paul speaks to the media during a press conference announcing she is officially stepping down as Green Party leader, at Suydam Park in Toronto on September 27, 2021. File photo by The Canadian Press/Tijana Martin
Previous story
Next story

Annamie Paul has formally resigned as leader of the Greens and also handed in her membership card, leaving the future of the party up in the air as it attempts to recover from internal strife and repudiation at the polls.

Paul sent in a resignation letter to the Green Party on Wednesday, which follows her announcement in September of her plans to step down.

On Sept. 27 I began the process of stepping down as Green Party of Canada Leader. Today I sent formal notice of my resignation to the GPC. I will also be ending my membership in the GPC.
It was an honour to work for the people of Canada and I look forward to serving in new ways.

The Green leader, the first Black and Jewish woman to lead a major political party in Canada, said a week after the election that leading the Greens had been the worst period of her life — due in part to the shattered glass ceiling.

"I had crawled over that glass, I was spitting up blood but I was determined to be there," she told reporters on Sept. 27.

The Greens returned only two MPs in the Sept. 20 election and Paul failed to win her Toronto Centre riding, placing fourth in her third run at the Liberal stronghold.

The party's puny showing at the polls — it won 2.3 per cent of the popular vote versus 6.6 per cent in 2019 — followed a period of infighting and sniping at Paul. She faced slurs by Green Party members on Twitter and claimed the party executive did not do enough to protect or support her.

Earlier this year, Paul drew criticism from a number of Greens, including MPs, for not publicly condemning Israel in stronger terms following a fresh outbreak of fighting between Israel and Hamas in Gaza. At least 230 Palestinians and 12 Israelis were killed in the 11-day war.

In a May 10 tweet, Paul called "for an immediate de-escalation in the violence and a return to dialogue as a means to seeking a peaceful resolution."

This dispute, set off after a senior Paul adviser pledged on social media to defeat unspecified Green MPs, among others, whom he accused of antisemitism — played a role in Jenica Atwin's crossing the floor to join the Liberals. First elected as a Green MP in the 2019 election, Atwin was re-elected under a red banner last month in Fredericton.

#AnnamiePaul hands in resignation as Green leader, and quits the party. #GreenParty #CDNPOli

A lawyer by training, Paul became Green leader in October 2020 after Elizabeth May stepped down following 13 years at the helm.

"I think it’s regrettable that she’s turned in her membership to the party," May said in a late-night interview from Glasgow, where she and fellow Green MP Mike Morrice are attending the United Nations climate change conference.

"We were in a paralysis. This is the moment where we can move forward."

During the election the Greens struggled with financial issues and sacked more than half their staff since.

Paul did not visit key target seats during the election, barely leaving Toronto because of lack of funding — and because some candidates asked for her to stay away so that the party's bitter internal politics did not spill over into their ridings.

Paul complained about a lack of cash, staff and a national campaign manager. Originally $250,000 was earmarked for her local campaign but the funds were nixed by party executives.

During the English leaders debate, Paul gave a confident performance which drew accolades for a series of pithy zingers.

A week after the election, she announced her intention to resign, but negotiations with the party, and an ongoing court dispute, meant that she did not step down immediately. Negotiations are continuing, according to two senior party sources who spoke on condition of anonymity in order to discuss matters not public.

Since then, a number of Greens have posted messages of support for Paul.

Dr. Courtney Howard, who came third after Paul in the last leadership race, tweeted that it meant a lot to have a “strong, intelligent, articulate woman on the stage.”

In a tweet on Wednesday, Paul said: "It was an honour to work for the people of Canada and I look forward to serving in new ways."

The party will now choose an interim leader until there is a fresh election for Paul's successor.

Questions on when it becomes effective — when Paul actually ceases to be leader — and whether a leadership review set in motion last month will continue went unanswered.

Mark Winfield, a professor at York University who researches the Greens, says the Greens face an "existential crisis."

"There are very serious questions about whether they’re going to survive as an entity or an organization. Because in additional to the leadership question there’s also the financial crisis as well," he said, noting the Greens' financial woes, which precede Paul's time at the top.

“It should be their moment," Winfield said, pointing to greater public awareness of environmental issues. "But it definitely isn’t.

"That’s not because of external factors; it’s entirely internal to the party. They kind of self-destructed," he said.

The fractious infighting showed no signs of abating this week.

On Monday, Green interim executive director Dana Taylor shut down two of the party’s Slack channels, saying in a post that aggressive chatter had made the spaces “unsafe” for members and hurt their "well-being."

The announcement was visible in a screenshot obtained by The Canadian Press and confirmed with three Green Party sources.

Green Party lays off half of all staff members as money woes, internal strife continue

Puhleeze. To send formal notice of resignation in a "process of stepping down" is just another step. As for the idea that AP "will also be ending" her membership in the GPC, she's used the future continuous verb tense rather than the present perfect: I have ended. She's a lawyer. Lawyers know about grammar and verb conjugation.