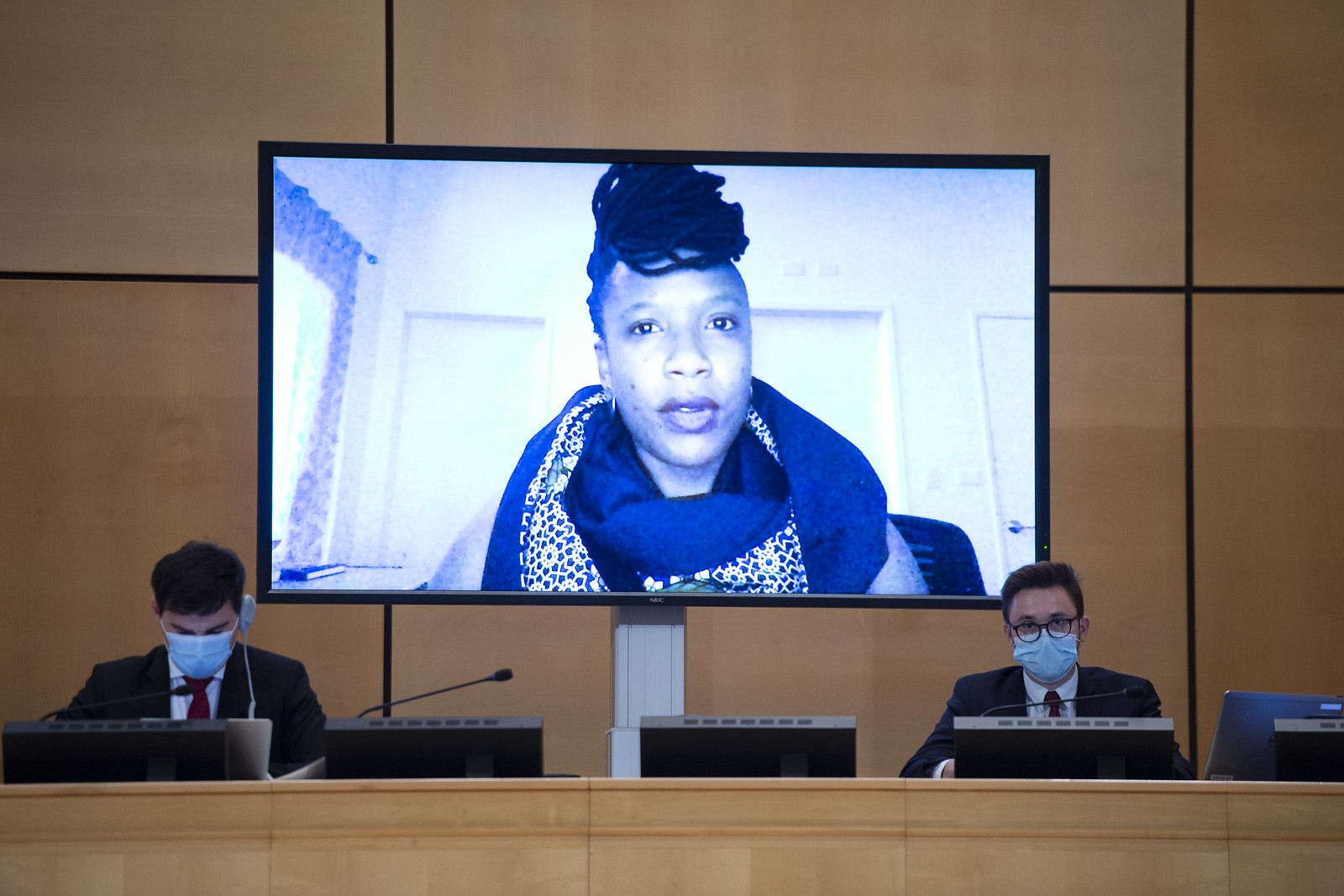 Tendayi Achiume said the same structures that created ecological inequality were being relied on to solve the problem. Photo by UN Geneva/Flickr (CC BY-NC-ND 2.0)
Previous story

The world’s reliance on high-tech capitalist solutions to the climate and ecological crises is perpetuating racism, the outgoing UN racism rapporteur has warned.

Green solutions including electric cars, renewable energy and the rewilding of vast tracts of land are being implemented at the expense of racially and ethnically marginalized groups and Indigenous Peoples, Tendayi Achiume told The Guardian in an interview.

In a last intervention before the end of her tenure, Achiume said meaningful solutions to the ecological crisis were not possible without tackling racism. But in a bleak assessment of the prospects for the future of humanity, she admitted it was “difficult to imagine” how that message could be made to resonate with people holding power.

“You can’t think that you solve the climate crisis and then attend to racial justice or racial discrimination,” Achiume said. “What you have to realize is that every action that is taken in relation to ecological crisis — environmental, climate and otherwise — has racial justice implications, and so every action becomes a site of undoing racial subordination.”

Achiume, a professor of law at the University of California, Los Angeles, was appointed as the UN’s special rapporteur on contemporary forms of racism, racial discrimination, xenophobia and related intolerance in 2017, becoming the first woman and the first person from Southern Africa to fill the role.

Her public comments have often been deemed controversial. On her first country visit as rapporteur, to the U.K., she provoked the fury of the right by warning of a Brexit-related rise in bigotry and calling for a repeal of “hostile environment” immigration policies. She went on to deliver similarly strong comments to the governments of Morocco, the Netherlands and Qatar, decrying the latter for operating a “de facto caste system based on national origin.”

In her reports, she has outlined how the extraction of natural resources, emerging digital technologies, and even global development frameworks were fuelling racial injustices, and the need for reparations for slavery and colonialism.

In her final report to the UN General Assembly in October, she tackled the relationship between racism and the climate and ecological crises. It was, she said, an issue that had been raised from the very beginning of her tenure as one of the most important global factors in racial injustice.

“The global ecological crisis is simultaneously a racial justice crisis,” she wrote in the report. “The devastating effects of the ecological crisis are disproportionately borne by racially, ethnically and nationally marginalized groups… Across nations, these groups overwhelmingly comprise the residents of the areas hardest hit by pollution, biodiversity loss and climate change.”

This climate justice-oriented perspective demands anti-racist solutions, Achiume said. But the very same structures that created racial inequalities were now being relied upon to solve the environmental crisis, leading to a “doubling down on racial inequality and injustice.”

The rush towards sustainable alternatives to fossil fuels, including electric cars and renewable energy, was creating what Achiume described as “green sacrifice zones” where already marginalized groups were exposed to environmental harms from the extraction of the very minerals needed for green tech.

The transition to electric cars, for example, implied a one-to-one substitution of vehicles “without accounting for the environmental impact of electric vehicles, and where the minerals and all of the materials that are required to produce electric vehicles are coming from,” she told The Guardian.

“Indigenous communities and racially marginalized communities are being displaced by innovations that are supposed to be leading us towards clean energy,” she added. “And there you see how a green transition, unless it explicitly centres racial justice, can come at the expense of and reproduce these sorts of racial injustices.”

These problems were being caused by an approach that thinks the solution to the environmental crisis could simply be “a more concerted application of the global capitalist framework,” Achiume said. This meant that the very companies that built their wealth from the destruction of the environment and from racial injustices were now being relied on to try to reverse the damage.

“We’re basically again trying to profit our way out of a crisis that is defined by an approach that thinks that profiting out of crisis is sustainable,” she said.

After Achiume’s final report was filed to the UN General Assembly in October, delegates at the COP27 climate change summit in Egypt agreed to a loss and damage fund to help underdeveloped countries adapt to climate-related disasters. These provisions were a positive step, and even “a way of forcing some engagement with reparations,” Achiume said.

“I see it as a wedge, you know, a way in the door and a way to create space, for accountability for the historic injustice that brings us to this moment of the climate crisis.”

But, she added: “I worry that the way that that loss and damage fund will be set up will actually be done to [undermine] what is actually required and what is being demanded by the countries that are pushing for a loss and damage framework.

“So the danger here is that we’ll see what we’ve seen in the past, a gain is made and then that gain becomes a site for a doubling down on the mechanisms that actually keep us trapped in the problem, rather than moving us forward.”

Such groups are already suffering the brunt of climate breakdown and environmental harms, she said. Now they have been left the passive recipients of whatever solutions have been decided on by leaders from the Global North.

“In consultations with Indigenous groups, and also with racially and ethnically marginalized groups, they talk about how they are takers rather than makers of the environmental and climate policies that affect their day-to-day,” Achiume said.