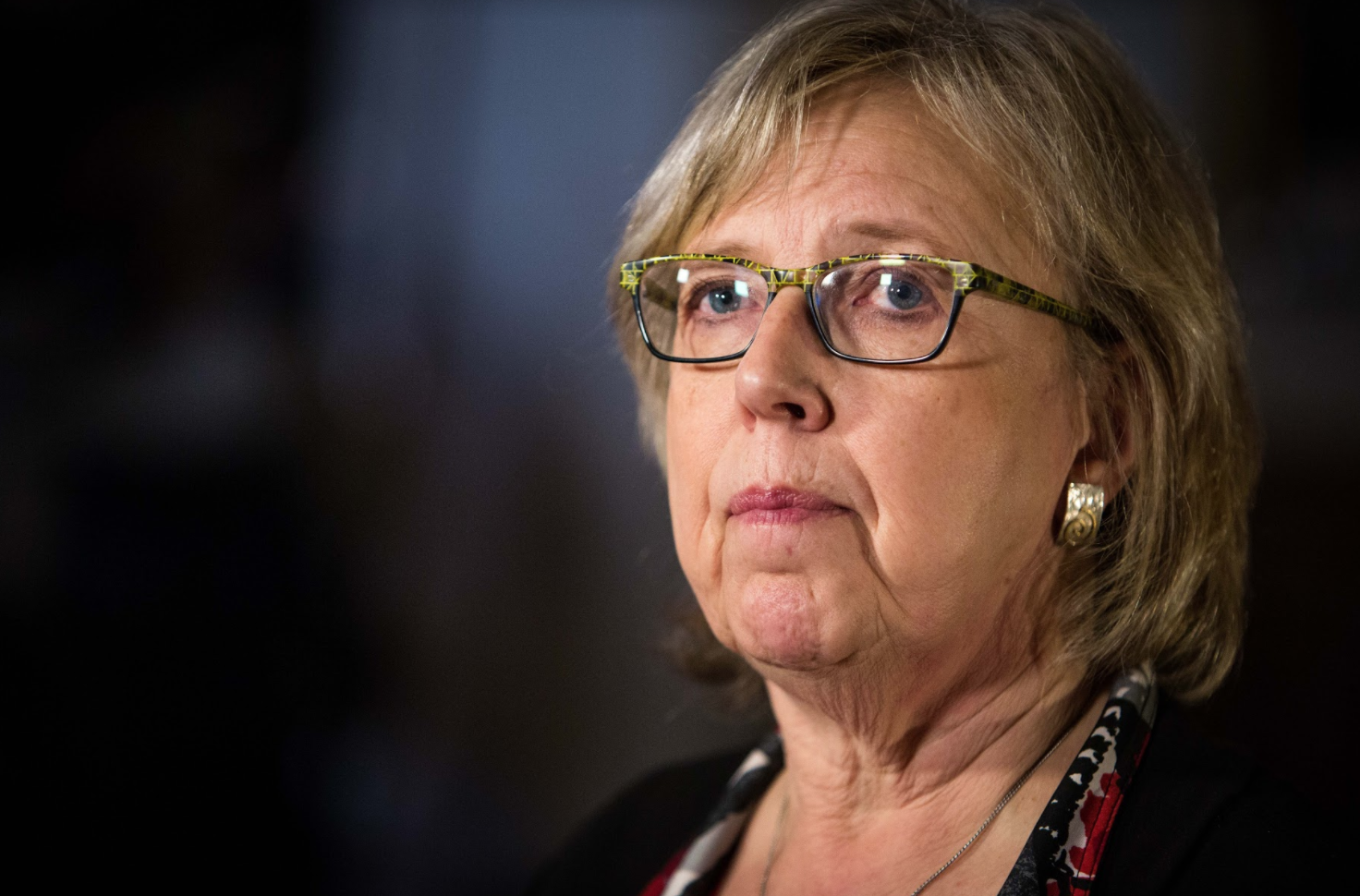 Green Party leader Elizabeth May speaks with reporters after learning that the Trudeau government will not remove the first-past-the-post system, as promised on Wed. Feb. 1, 2017. Photo by Alex Tétreault
Previous story
Next story

There is an old parable of a North American indigenous culture. My best sources say it is Cherokee, but I first heard it from a Mi'kmaq elder.

It is the story of a grandfather who told his small grandson that within him a war was raging.

“Ah,” said the grandfather. “That all depends on which wolf you feed.”

Our society is now in the throes of a desperate battle. The life of democracies around the world is being torn asunder as if by two wolves.

Competing styles of politics duke it out. Some carry a worrying odor. Is it fascism? Or is it merely a bit off? Some give oxygen to the previously presumed dead forces of white supremacy, racism, misogyny and hate.

One thrives on fear, division, raw prejudice, and cynicism. The other is pure. It needs hope, faith, mutual trust and co-operation. It thrives on love.

Our young prime minister came to us wearing the mantle of the good wolf. He inspired hope. He imbued caring and compassion, generosity and sharing. He told young people (and he told us old people), “I am here to bring real change.”

I loved that the Liberals formed government without paying for one single moment of attack ads. (Take that cynical politics. Score one for the good guys. “Dog whistle politics” takes a beating.)

Admittedly, I never thought the Liberals’ promises on climate were particularly hard to meet. They were vague and weak – better than Harper’s – but not a challenge for delivery. I figured the platform was thin on promises in order to make sure they were all met.

Then blow upon blow rained down in the last eight months. Woodfibre was approved. Site C permits to dam the Peace River were issued. Pacific NorthWest LNG on Lelu Island got the thumbs up. Harper’s weak climate target was embraced as the new government’s goal. And painfully, brutally, Kinder Morgan and its risky tankers, loaded with diluted bitumen (an oily substance that cannot be cleaned up), was given a green light.

But I told myself – these decisions, egregious as they are – violating the commitment to First Nations, breaking faith with the principle that decisions must be evidence-based, with a strong scientific foundation – these projects were not mentioned specifically in the platform. By extension, they blow huge holes through the Liberals promises, but it is possible the Liberals do not appreciate the facts of dilbit, Flora Bank and the eel grass that supports the Skeena salmon.

The Liberals are misled by their advisors. The ministers are new and untested and unaware of how far they have fallen off course.

Yes, I made excuses. Why am I so willing to give the benefit of the doubt? It is because I know how critical it is to keep hope alive. I do not want to feed the bad wolf. Citizen engagement and faith in the system are essential ingredients for our survival.

I speak not of a figurative survival. I speak in real terms of real survival. Rapid decarbonization is essential in order for human civilization to survive. We cannot risk feeding cynicism.

The promise to make every vote count, to ensure that 2015 would be the last election held under first-past-the-post, was clear. It was not open to interpretation.

Claiming, as the prime minister and his newly-minted youngest woman minister – replacing as the youngest minister in government, the previous minister of democratic reform – claimed today that they had “always” said no change would be made until they knew what the majority of Canadians wanted – is raw meat to the bad wolf.

There was never a condition set that consultations would be required to ascertain the will of the body politic. That was the stuff of the 2015 election in which 63 per cent of those who voted supported candidates (whether Liberal, NDP or Green) calling for an end to our perverse voting system.

Our promising (pun intended) prime minister must take stock. This is a moment for urgent course correction. Do not feed the wrong wolf. Too much is at stake.

Thank you for this article. Once again, words are meaningless without actions backing them up. Lying is lying is lying. Black and white. Very disappointed in our PM, I had so much hope with his words, but the actions are showing I was wrong to believe. Very sad.

I love this woman! She is

I love this woman! She is positive, philosophical and generous even in her anger, disappointment, and frustration.
But perhaps our Prime Minister is only providing us with Alternate Facts?

Elizabeth, Elizabeth! Even though I am a B.C. Green Party member wishing to cooperate with members of other parties in coming to cooperative decisions, I certainly do NOT have my head in the sand! Nathan Cullen, today, spoke the truth about the PM in plain, unvarnished English. Trudeau is a liar of the most devious and despicable sort. Hypocrisy has been his trademark since he made his first naïve environmental statement that we need pipelines to tidewater so that we can afford transitioning to renewable energy and meet our COP 21 commitments. EVERY decision he has made in the last 6 months has underlined the breaking of the promises he made to aboriginal peoples about equality of nations, and the promises he made to all of us that he embodied true change. This liar is just more of the same. Heaven help us now that we have proven to be as gullible as have the electorate to the south.

Justin Trudeau is a con. So sad. If he had the guts and told the truth as to what he intended to do on our coast, during the election cycle not after, would the results have been different? I'd say yes. Would he still have a false majority government? perhaps not.

"Citizen engagement and faith in the system are essential ingredients for our survival."

Justin Trudeau is a perfect example of why our system is broken. An essential ingredient for our survival is changing this very broken, one party * one person * controlling 100% of the power on only 39% of the vote! Not healthy!

Other symptoms of this sick system are Kinder Morgan, Site C, not enough consultation, pushing aside FN rights and a total lack of understanding that we need to stop our C02 emissions NOW.....3.3 BILLION in oil subsides -- 220 million in renewable energy subsidies. Another symptom of our FPTP electoral voting system. Change the system -- change the results.

Christie Clark and Justin Trudeau did not receive majority support. They're acting as if they did. Our system needs to be fixed.

These are all up and coming Canadian women. A real threat to the power base of Canada should they continue to gain credibility.

To put it mildy, they have all been hazed - forced to disavow their life's work to contort to the desires of Trudeau's backers. This is misogyny as vile as the far right practices. There is no difference between Trudeau and Harper except the wrapper, and the presence of lube.

I've tried at length to debunk the colonial-settler thesis. But the behaviour of Trudeau only further ratifies it....if the good wolf has no place in Canadian politics, then what is the point of Canada?

I'm not sure who, other than

I'm not sure who, other than Ms May (if we are to take her at her word -- and here I am making excuses too, trying to find a sliver of a benefit of the doubt), but really who in their right mind with their eyes even partly open, however basically hopeful their overall outlook, could ever have presumed that the forces of white supremacy, racism, misogyny and hate were dead? These forces don't "die." At best they are beaten back to the extent they are no longer the dominant forces in any given society, but to think that they "die" is to dwell in a kind of wishful thinking that we simply cannot afford.

Feeding the bad wolf leads to

I plan to make copies of this

I plan to make copies of this beautiful article and send them to MPs, especially Liberals. Liberal MPs, especially women, helped keep Canada out of the awful "coalition of the willing" in 2003. I hope they will also make sure that electoral reform progresses, if only to protect us from facing the kinds of division and destruction we see now under Trump.