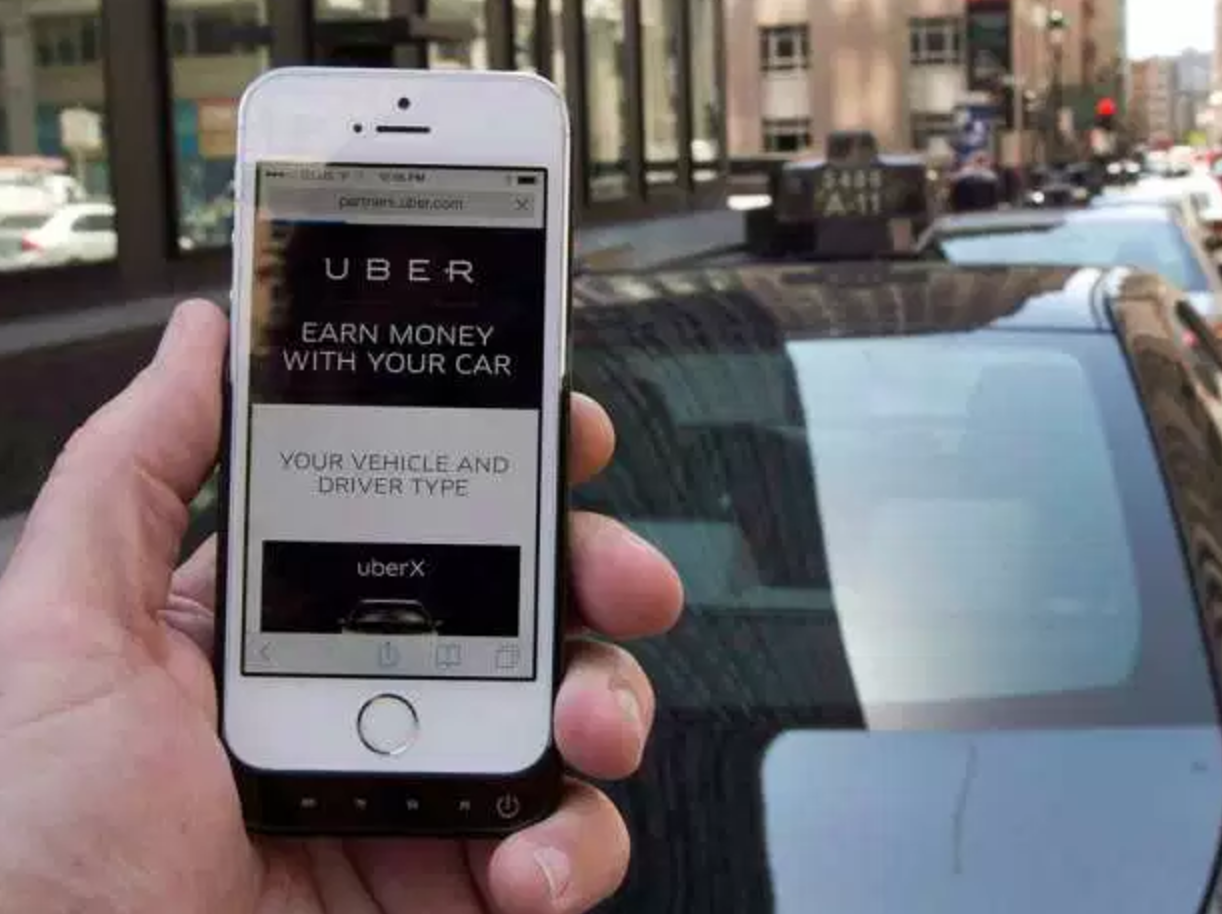 Canadians have saved thousands of hours - and dollars - using the ride-sharing services of companies like Uber. Now, they'll have to pay taxes for it. File photo by The Canadian Press
Previous story
Next story

The federal government is steering in the wrong direction, says Uber, as Finance Minister Bill Morneau proposes to collect sales taxes from ride-sharing services across the country.

On Wednesday, Morneau tabled a budget that, if approved, would force Uber and other ride-sharing companies to pay GST and HST, just like conventional taxis. According to the minister, this initiative aims to give Canada a more fair and efficient tax system, and "level the playing field" for cab services competing with companies like Uber.

But Uber — which serves more than 40 communities in Canada and employs more than 32,000 drivers — strongly disagrees. On Thursday, the company sent a statement to media out tlets to explain that it was asking the federal government for "meaningful consultation" on the proposal, as they collaborate to create "smart solutions."

Tax hurts "over a million" Canadians

"This new tax on innovation would hurt over a million Canadians who use ride-sharing to earn income and get around their cities," said Ian Black, regional manager for Uber Canada, in the statement.

"At a time when Canadians spend far too much time stuck in traffic — and people should be encouraged to leave their cars at home, take public transit, and share rides — we should be supporting policies that make sustainable transportation more affordable, not more expensive."

At a press conference on Wednesday, Morneau said Canadians "expect" to pay GST for transportation services and that the hike in taxes makes the system more consistent. Uber fundamentally disagreed, however, with the idea that it 'levels the playing field,' and instead suggested that the federal government offer the taxi industry the same exemption on collecting sales tax that now apply to small business owners who have annual sales of less than $30,000.

Uber is a multinational company based in San Francisco, California. According to recently leaked financial documents, obtained by The Information, the company estimated gross bookings from riders worth US$3.63 billion in the first half of 2015.

The company has also been criticized by politicians and labour experts who argue that its drivers face harsh working conditions and low wages.

The Canadian Labour Congress says that it's only fair to tax Uber. Emily Norgang, a senior researcher for the national union and labour advocacy group, said if taxi drivers making less than $30,000 per year still have to pay GST and HST, there's no good reason Uber drivers shouldn't.

Those taxes, she explained, contribute to the road infrastructure used by Uber drivers and taxi drivers alike, and companies like Uber should pay their fair share.

"They should be held to the same standards that local Canadian companies are held to and all taxis are held to," she said in an interview. "It’s a question of corporate accountability and tax fairness. They have to abide by the same laws everyone else does."

In an emailed statement to National Observer, Uber declined to comment on whether it thought the sales tax was fundamentally "unfair" but said it's clear, in the end, it will increase the cost of ride-sharing for its consumers.

The company has not yet fully assessed pricing considerations for the bottom line, said senior communications associate Susie Heath. She emphasized that instead of taxing its drivers, however, Uber would prefer the government grant the same tax exemptions to taxi drivers making less than $30,000 per year that its own contractors have enjoyed for years.

Hiking the price on booze, tobacco

Another tax proposal in Budget 2017 that is sure to cause an uproar is a two per cent excise duty increase to the cost of booze. The raise is expected to add several cents to the cost of alcohol, ranging from less than a penny for a bottle of wine to seven cents for a 750ml bottle of liquor.

The tax is expected to generate additional $30 million in government revenue during the 2017-2018 fiscal year, and starting next year, the rates will be adjusted every April 1 based on the consumer price index.

Meanwhile, the excise duty rate on cigarettes is also increasing to $21.56 per 200 cigarettes from $21.03 — a measure that could rake in an additional $55 million by this time next year. The increased 'sin taxes' are effective on March 23.

The changes may not be popular, but on Wednesday, Morneau insisted it's "the right approach."

Interim Conservative Leader Rona Ambrose slammed the government on Wednesday for the changes in tax policy.

"This budget grows the size of government," Ambrose told reporters outside the House of Commons. "It raises taxes all over the place to find a way to pay for the spending. It even taxes Uber. This is a new one. It even taxes Uber and it clearly demonstrates that the prime
minister is completely out of step with the challenges that regular ordinary people have when they’re trying to pay for the cost of living."

Tax Uber out of business if

Tax Uber out of business if it doesn't mend their ways. No difference between Uber management and the robber barons of the early 20th C. They drove down workers' earnings to make huge profits, and so is Uber. They paid themselves huge salaries off poverty wages, and so are Uber managers. Sharing economy = exploitative capitalism.

There is no doubt that Uber

There is no doubt that Uber should pay GST and HST. Frankly, it should also pay
corporate income tax. This is a multibillion dollar company that has decided that rather than following the rules of the jurisdictions it wishes to operate in, it bullies these jurisdictions into submission to its standards. For example, a number of jurisdictions have decided that taxis require cameras in taxis for safety reasons. Over refuse to pay for that type of equipment and refused to install it as their drivers would refuse to pay for for it in their own private cars . So a number of cities just let Uber operate the way it wanted to operate. Other places lowered the levels of insurance that taxis had to have because
Uber wouldn’t force it’s drivers carry that amount of insurance.

One of the most disgusting displays of civic subservience to these corporate bullie was in Ottawa where the mayor and the counselor leading the charge for Uber folded like cheap shirts. In mid-summer , the mayor and council suggested that Uber could begin operating legally at the beginning of October. An Uber spokesperson simply replied that the company was not going to wait until October 1 but would continue operating
from the date of the hearing. In my opinion, that should have resulted in the seizure of any Uber taxis found on the road during the period from the hearing until the official legal start date and the levying of fines and the charging of storage fees for the period the cars were impounded. In fact nothing was done. The corporate bully had its way

An Uber spokesperson referred to the tax as a tax on “innovation “. That is a nonsense. Certainly something had to be invested in technology and no doubt it was subsidized heavily down in California. It would appear that a major part of its innovation was the development of a corporate structure that avoided all corporate income taxes and also the evasion of virtually any responsibility for dealing with complaints from their workforce.. (Apparently, if a Canadian driver has an issue regarding his or her costs, they have to
fly to Amsterdam to present their case in person.)

Like many modern corporations , Uber likes to overlook the fact that it is using infrastructure that was built and paid for by the citizens of the places it operates. Clearly, it feels no obligation to contribute to the cost of the infrastructure it takes advantage of to make its billions of dollars .it feels it has a right to be subsidized by local ratepayers .

While I don’t share that belief, it is apparent that Rona Ambrose of the Cons does. This should not be a surprise to anyone since the Cons were quite happy to subsidize the oil and pipeline industries to the tune of hundreds of millions of dollars each year they were in government .

As a final point, it is my view that using the term “ridesharing “should be outlawed .there is nothing sharing about this operation. It is a moneymaking business and the abuse of the word “sharing “simply serves to further jargonize the English language .