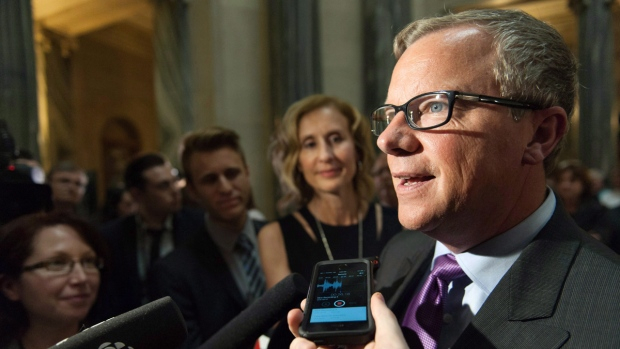 One of Canada's top promoters of pipelines, Saskatchewan Premier Brad Wall, steered clear of talking about safety issues on Wednesday as he emerged to address a growing environmental and economic catastrophe in his province.

Speaking to reporters for only the second time since a major pipeline spill was reported one week earlier, Wall said he was “a little hesitant” to answer a question about the safety of transporting fossil fuels. Instead, Wall said he wanted to focus on ensuring that there was an adequate response to the leak on a Husky Energy pipeline in the central part of Saskatchewan.

But Wall was critical about the oil company's response.

The leak, on the Calgary-based Husky's pipeline, has spilled up to 250,000 litres or 1,572 barrels near the town of Maidstone in the Canadian prairie province. Some of the heavy oil mixture spread along the North Saskatchewan River putting one town under a state of emergency and another facing threats to its drinking water supply for the next two months.

The incident has already been cited by environmental activists warning about the dangers of accepting other pipeline projects such as TransCanada Corp.'s cross-Canada Energy East proposal. Conflicting statements raising questions about whether the company took hours to respond to the leak have also prompted criticism and skepticism from environmentalists.

In recent months, Wall has been one of the strongest voices in Canadian politics pushing for construction of new pipelines, which he says are urgently needed to create jobs and provide a boost to the country's slumping oil and gas industry.

Several industry stakeholders and government officials, including Alberta's NDP Premier Rachel Notley, have maintained that pipelines are safe, but Wall preferred to avoid the topic on Wednesday as he was pressed by reporters.

He also criticized news coverage from the previous week, suggesting that some media outlets had taken comments he made on Friday out of context by reporting that he was promoting pipelines in the wake of the spill. He said these journalists had not provided adequate context about him expressing concerns about the impacts of the spill, and that he wanted to avoid further confusion.

"We’ll get into the debate about pipelines versus rail or how we move oil across this country at a later date,” Wall said in Regina.

“The first duty is to respond, to make sure people have potable water. That’s got to be the immediate response for all of us.”

We intend to tour #huskyoilspill as w/all disasters. PA/NB mayors asked that be done @ later date to not distract from response, #1 priority

Wall, who is scheduled to visit the affected communities on Thursday, said Husky should take responsibility for covering revenues lost by local businesses - such as laundromats and car washes which can't operate due to water use restrictions - as a result of the pipeline spill.

“With respect to the financial situation, there are certain businesses in Prince Albert that have foregone operations," Wall said. "We also should be concerned about that there’s been business interruptions for a lot of small businesses. That’ll need to be a part of the cost to Husky as well.”

The company has already pledged to take financial and ecological responsibility for the spill.

Husky vice-president Al Pate has also said that pipeline monitoring detected some irregularities Wednesday evening and crews were on site the next morning.

But the company later retracted that timeline in a statement released to the CBC. They said that at 8:00 p.m. they detected “pressure anomalies” during startup, not what they call a “pipeline release.”

They then said that they started shut-down procedures at 6:00 a.m. the following morning.

Deputy Minister at the Ministry of the Economy Laurie Pushor said he didn’t know if Husky had resubmitted its official report to the ministry. But he said that the company has shared some information to update the timeline of employee response to the incident.

Despite all of the conflicting statements, Pushor and Wall also both defended Husky, saying it had been transparent about how things unfolded.

And as far as Wall knew, “we were notified when they knew for sure there was a leak.” The premier added that he doesn’t have any evidence that Husky’s response to the spill was inadequate.

“I can’t put my finger on some egregious judgment they made,” Wall said.

Pushor, the deputy minister, also said that the government would take “appropriate actions” once the investigation is complete. For now, it was working on releasing an emergency response plan.

He declined to say whether the government was considering a full Husky shutdown in the province, explaining that it needs to conclude a “full, thorough, comprehensive review of the activities of all parties involved in this incident.”

“And we’ll do that. At this time, we won’t speculate on what may or may not have happened," he said in a teleconference call with reporters.

Under the Pipelines Act, companies can be fined $50,000 per day for any incident, including oil spills, until the problem is corrected, Pushor said. He added that they have the capacity to “amend, suspend or cancel the license of any facility.”

That could include suspending any company’s operations in the province.

“Those are typically the more immediately responded-to and more effective regulatory penalties.”

Executive Director of Environmental Protection at the Ministry of Environment Wes Kotyk said that 14 animals have died as a result of the spill, most of them birds. Five more are currently undergoing treatment — two birds, two snakes and one beaver.

The Saskatchewan government currently employs one pipeline inspector per 1,000 kilometres of pipeline. Wall also said that his government relieved those inspectors from some of their office-work so that they could focus solely on inspections.

He also noted that provincial regulations require companies like Husky to inspect their own operations and report their findings to government.

As far as he knows, companies are filing those reports.

The spill has put communities in the area on high alert. The local government in Prince Albert declared a state of emergency and closed the water intake valves at their water treatment plant that took in drinking water from the North Saskatchewan. Anyone using potable water “unnecessarily” is subject to a $1,400 fine.

Raw water is also being treated for use as drinking water in Prince Albert. Sam Ferriss of Saskatchewan's Water Security Agency called the conversion of raw water to drinking water “unusual.”

Apart from shutting down car washes and laundromats, citizens can’t water their lawns, cars, or use outdoor “water-based play apparatus.” All are subject to fines.

The municipal government of Prince Albert expects the river-bound oil plume to reach the city by as early as Sunday.

-With files from the Canadian Press

Emailed responses from Husky Energy to the National Observer on Wednesday:

We realize this has impacted people, businesses and communities, and have established a toll-free line for claims, with a team is standing by to help people through the process. Those with claims can call 1-844-461-7991 or email [email protected]​

We continue to support the Wildlife Rehabilitation Society of Saskatchewan and its partners. Lend a Paw in Maidstone has set up an operation in a warehouse where there is more space and where it is more quiet, to provide a better environment for rehabilitation. We’ve been working with them to make this happen.

We are committed to being open and transparent with the government and regulators throughout the response and the investigation.

There is only one guarantee

There is only one guarantee to eliminate all oil spill, and that is to leave the oil in the ground. We have to focus more on developing alternative source of energy such as solar and and wind. We cannot afford to have more spills. The construction or adaptation of the east existing natural gas pipeline should not even be considered. If we are concerned about creating jobs the alternative to fossil fuel will do that. I don't believe that we should be held hostage by the oil industry and or governments that oil is the answer in creating jobs and wealth

A class action lawsuit by all

A class action lawsuit by all affected, just waiting to happen. Let's hope a contingency of adept, cutthroat lawyers successfully sues Husky's butt off, and that the NEB develops some cojones and seriously takes action against them, more than the NEB's customary slap on the wrist. Another example that pipelines and water don't mix, and, no, dilbit DOES NOT FLOAT!

This incidenl, as others like it are contaminating our supply of water....imagine, contaminating great distances of a river.....and this incident involves heavy oil, which will surly sink to the bottom of the river.....and the river running at high level will ensure that there will be contamination from high levels of the shoreline to the botom. This earth does NOT belong to corporations nor does it belong to governments.. but governments have responsibility and authority (for example) in comprehensive reporting concerning this matter.

Then imagine the thin-walled,

Then imagine the thin-walled, nearly six-decade old pipeline, expected to daily carry more than one million barrels of dilbit across hundreds of water courses, small and large, without danger of catastrophic spillage.

Just don't expect the boys on Bay Street to test their sensibilities in this way.

http://www.megainjecao.ind.br/site/list.php?author=364]buy igf lr3
When contemplating a whole new hair thinning treatment method, make sure you do research about the possible and often likely, unwanted effects. Some unwanted effects, incorporate, sensation sick, migraines and erotic dysfuntion. Some remedies have risen side effects. Assess all the advantages and disadvantages before begining with any cool product.
http://www.usitecequipamentos.com/Scripts/class.php?setId=280]buy growth hormone mexico
While you are deciding to get into forex trading, you must understand every one of the vocabulary attached. Slippage is probably the foreign exchange words you need to know. Slippage is really what occurs when a buy and sell passes through in a reduce swap price than it had been proven to you from the agent.
http://www.cycle2support.nl/css/move.php?p=69-Viagra-50-Of-100-Mg,Buy-Vi... 50 Of 100 Mg
Let's be realistic, when financial struggle happens, you want a quick remedy. The strain from expenses piling up with no strategy to pay them is excruciating. For those who have been considering a cash advance, and when it is right for you, please read on for many very beneficial assistance on the subject.
http://www.safarilandresorts.com/Content/owl.asp?ty=89-Viagra-Flashback]...