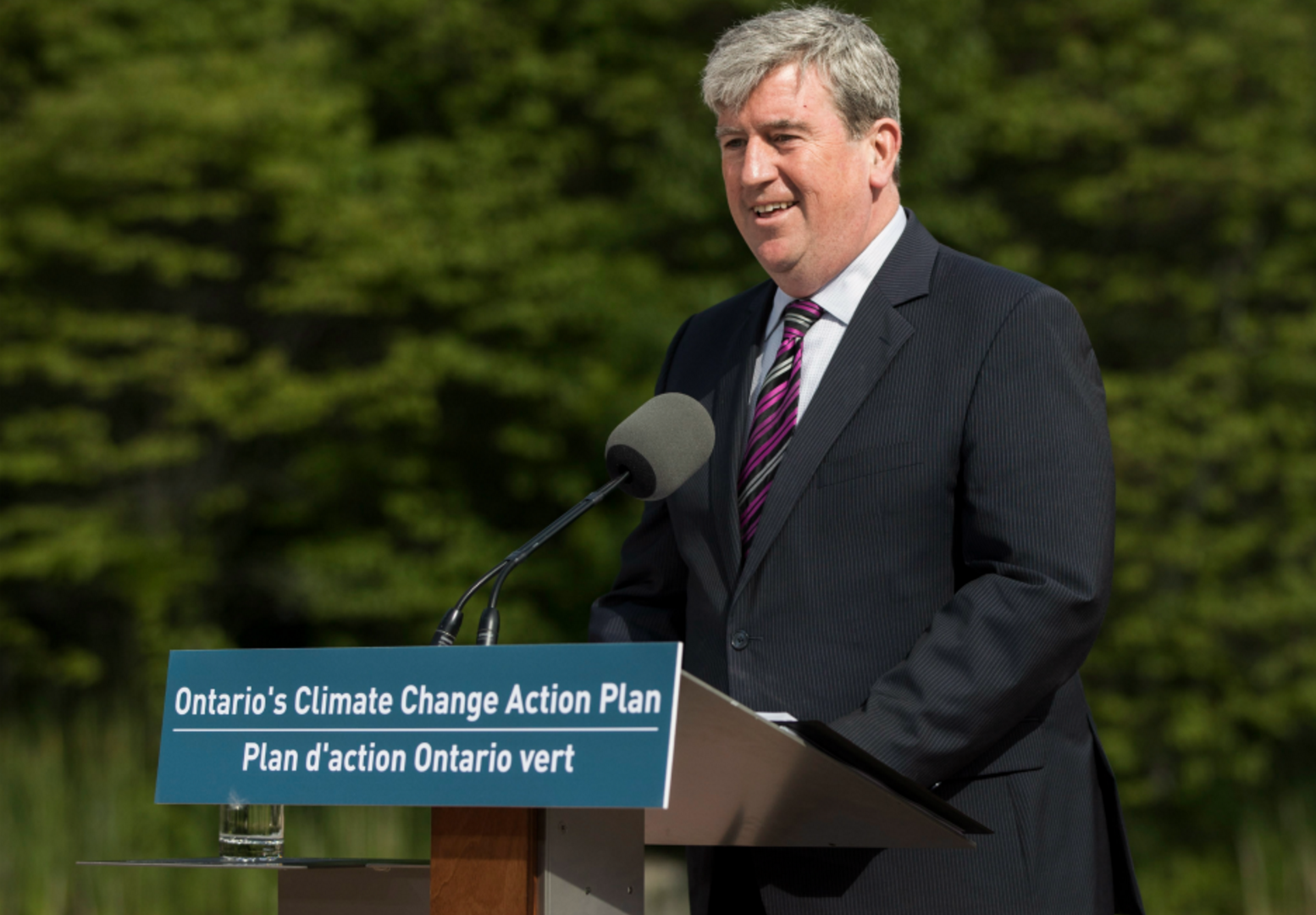 Glen Murray, who served as Ontario's environment minister from 2014 to 2017, announced his resignation Monday in order to lead the clean energy think tank, the Pembina Institute. File photo by The Canadian Press
Previous story
Next story

As the Ontario government lost an experienced cabinet minister on Monday, one of Canada's leading environment and energy think tanks greeted its incoming executive director.

Glen Murray — MPP for Toronto Centre and Ontario's minister for environment and climate change — announced his resignation on Monday in order to take the helm at the Calgary-based Pembina Institute, prompting an early morning cabinet shuffle in Premier Kathleen Wynne's government.

Murray, who has built a reputation as a champion of human rights and climate action, will start his new job in September.

"I'm thrilled, a little bit surprised, a bit overwhelmed, excited and anxious all at the same time," Murray told National Observer in an interview. "It’s a job I’ve dreamed of having and it’s an organization which I have such huge respect for, one of the easiest decisions I ever made in my life was filling out the application form for the job at Pembina."

Murray will remain an MPP until the beginning of September in order meet promises and commitments made to his constituents, before taking over for former Pembina executive director Ed Whittingham. Whittingham said his own resignation from the position was "just to give something else a try and make space for someone new at the helm."

The Pembina Institute focuses on generating the research and evidence required to support Canada's clean energy transition, and has offices in Vancouver, Calgary, Edmonton, Toronto and Ottawa.

Murray has a broad portfolio of experience in both the non-profit and political world. Over a seven-year career in provincial politics, he has served as the minister for infrastructure, transportation, research and innovation, and training, colleges and universities.

Prior to that, he was mayor of Winnipeg for six years and the first openly gay mayor of a large North American city. He has also co-chaired Canadians for Equal Marriage, worked as president and CEO of the Canadian Urban Institute, and fundraised for Habitat for Humanity. He is a founding member of the Canadian AIDS Society and a recipient of the Queen's Jubilee Medal.

In an interview, he said he was "really glad" to be leaving politics, but that he wouldn't be too far away. As executive director of the Pembina Institute, Murray will be actively involved in working with local, provincial and national governments to develop durable, innovative climate solutions.

"I will miss the ability to affect change and I will miss my colleagues," he said. "But I'm really glad to be out of politics. I think on the climate file, leadership is leaving government for communities, municipalities and business. It's a good time if you want to continue to keep your shoulder to the wheel in the fight to be out of government."

Whittingham, whose career at Pembina spanned 12 years, welcomed Murray warmly. He said his successor's challenge will be helping to develop lasting policies that can't be taken down easily by successive governments. He pointed to the Trump administration's derailing of climate action as one example, and the environmental crackdown he faced while working for Pembina under the former Stephen Harper government as another.

"The challenge that he will face at the helm of Pembina is now focusing from getting policy in place to implementation," Whittingham said in an interview. "Implementing policy — how do you make it enduring? How do you make it robust? How to you make it so that's it's resilient to different governments down the road who might be coming in?"

Murray said his experience makes him well-positioned to tackle that challenge. As environment minister for Ontario, he said he has helped implement lasting market solutions to the climate crisis, including cap-and-trade legislation with Quebec and California, and the Circular Economy Act, which holds Ontario sellers and producers responsible for end-of-life management of their products and packaging.

"When you've got things that are set up and are really owned by the community and work in the economy independently, it’s very hard to undo those kinds of things," he explained. "When you’ve been a mayor of a large city as I have…you want to see the things you’ve done to improve your city get locked in, so you get very good at designing policies in ways that they’re hard to undo, as long as they’re doing the right thing."

Ontario's minister for housing and poverty reduction, Chris Ballard, took over the climate portfolio from Murray during a swearing-in ceremony on Monday morning. Wynne promoted Peter Milczyn, MPP for Etobicoke-Lakeshore, to cabinet as a replacement for Ballard.

During the shuffle, Wynne also made the Office of Francophone Affairs for Ontario a standalone ministry, led by Marie-France Lalonde, the minister for francophone affairs, community safety and correctional services.

Asked whether Murray's shift to the think tank, which takes part in lobbying activities, represents a conflict of interest, Pembina Institute responded via email:

"Glen is aware of the rules governing lobbying and he has had multiple conversations with the integrity commissioner to be sure that everything is square. Like every other minister, Glen will continue to follow the rules of the legislature. All of Pembina’s lobbying work in Ontario will continue to be handled by our current team based out of Toronto."

Over the next month, Murray said he will spend his time working with his "very large, demanding" Toronto constituency to keep his promises and leave the riding in good shape before starting with Pembina on Sept. 5. He will likely spend a lot of time "couch-surfing," he added, as he hops back and forth between the think tank's offices across the country.

"I expect I’ll spend a great deal if not most of my time in Calgary, but my partner and my mother whose going to turn 90 in a few weeks — it’s hard for me to completely relocate," he explained. "We have a very dynamic group in Vancouver, Edmonton, Calgary, Toronto and Ottawa and we want to expand our presence across Canada, so I expect I’ll be divided by time fairly equally, with an emphasis on Calgary.”

By Elizabeth McSheffrey | News, Energy | May 2nd 2016
Race to a Safer World

"The Pembina Institute focuses on generating the research and evidence required to support Canada's clean energy transition, and has offices in Vancouver, Calgary, Edmonton, Toronto and Ottawa."

Dear sweet peas, what a gas! What was the biggest project Pembina engaged in, for the past two years? The Landowners Guide to Oil and Gas Development. Where does Pembina get most of its funding? Consulting for the oil and gas industry. What would Canada be without Pembina? Better.