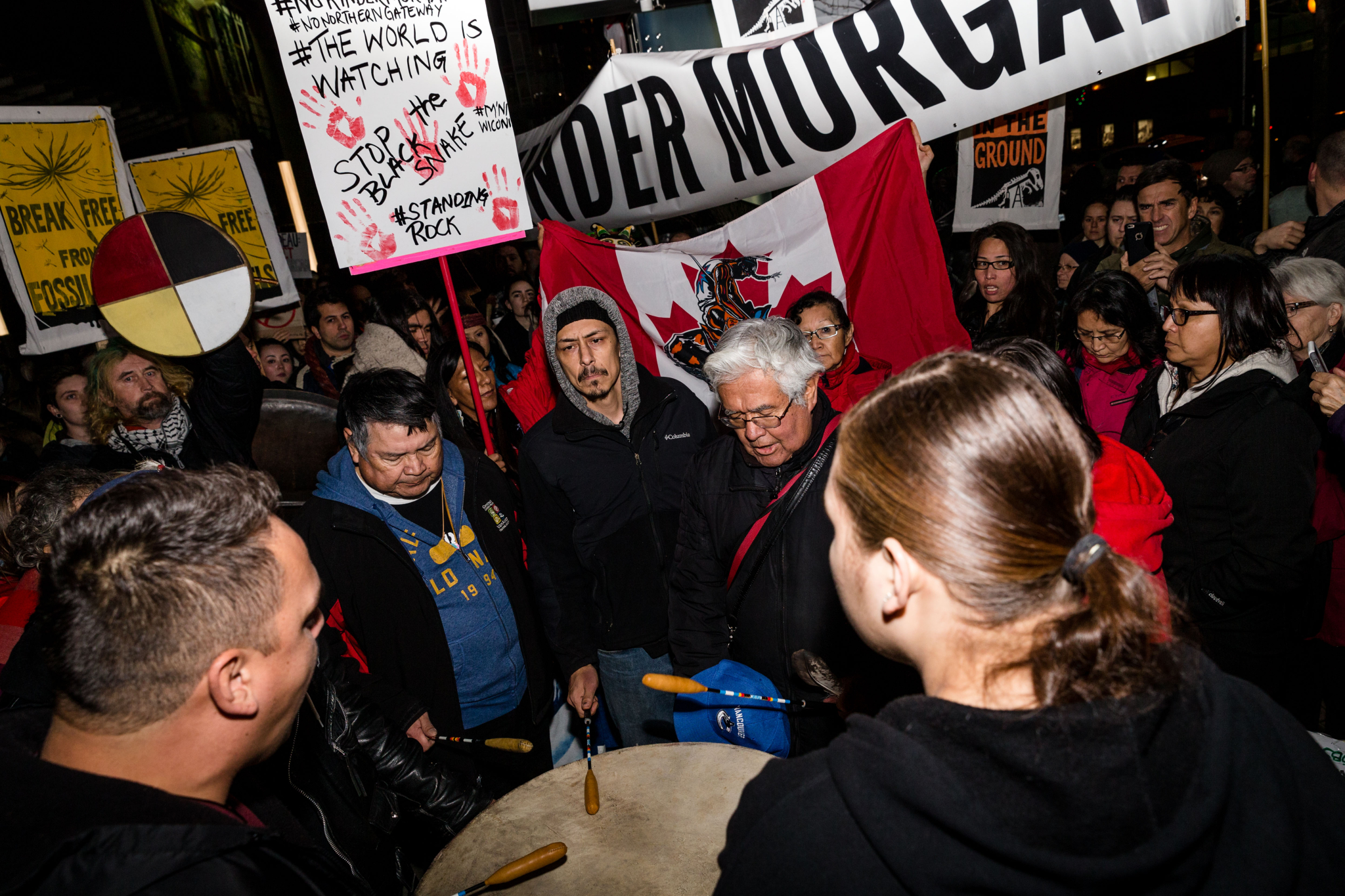 Protesters take to the streets of Vancouver, B.C. over approval of the Trans Mountain expansion on Tues. Nov. 29, 2016, in part, for its contribution to climate change. Photo by Roger Pimente.
Previous story
Next story

Prime Minister Justin Trudeau announced the approval this week of two major oil pipeline expansions, insisting all the while that the new fossil fuel infrastructure fits within his Liberal government's plan to reduce greenhouse gas emissions.

Environmental advocates immediately called the approvals a betrayal, but a series of government climate policy moves this year suggest Canada's emissions should come down — although whether it will be enough to meet the country's 2030 climate commitment is another matter.

Trudeau sits down next week with provincial and territorial premiers to complete a pan-Canadian climate strategy that's supposed to put the country on a downward emissions trajectory to its 2030 Paris emissions target. The government has promised the United Nations that Canada will cut emissions 30 per cent below 2005 levels by 2030.

Canada's greenhouse gases have been slowly trending upward for half a decade after a recession-induced dip, and every new fossil fuel project approved adds fuel for critics who say the country is once again going to blow past its international climate promises.

"Today's announcement is part of our plan to reduce greenhouse gas emissions," Trudeau said at one point during Tuesday's news conference — prompting a guffaw from someone in the assembled press throng — before he completed the sentence by alluding to Alberta's 100-million-tonne cap on oilsands emissions.

As Environment Minister Catherine McKenna explained it, Alberta's 100 megatonnes of emissions are "built into our climate plan."

The Liberals have been busy for months announcing federal climate polices, many with significant GHG reduction numbers attached. A Canada-U.S. commitment to reduce emissions of methane — a powerful greenhouse gas — are estimated to cut carbon dioxide equivalents by 18-20 million tonnes by 2030.

The phase-out of coal-fired electricity could net 15 million tonnes of reductions, a proposed low-carbon fuel standard has been pencilled in for an ambitious 30 million tonnes, and newly posted regulations for hydrofluorocarbons — another powerful GHG — should cut eight million tonnes of CO2 equivalent yearly by 2030.

Environment Canada was unable to provide an estimate Wednesday of carbon reductions from the national floor price announced by Trudeau in October, but the federal-provincial Working Group on Carbon Pricing Mechanisms — whose report was quietly posted last Friday — suggests they could be significant.

The working group examined three scenarios that cut emissions between 38 million tonnes and 95 million tonnes a year by 2030. None of their scenarios line up directly with the plan announced by the prime minister, but the Liberal plan appears to fall closer to the high end in terms of emissions cuts.

Taken together, a handful of federal measures could conservatively account for well in excess of 100 million fewer tonnes of GHGs a year by 2030.

Set against that are the Liberal government's approvals of the Pacific Northwest liquefied natural gas project, with a cap of 4.2 million tonnes of emissions per year, and this week's two pipeline approvals.

The environmental assessments for Kinder Morgan's Trans Mountain pipeline expansion in B.C. and for Enbridge's Line 3 expansion suggest emissions of between 23 and 28 million tonnes. But those numbers are inflated because all the oil in the expanded pipelines won't be incremental, new production. Much of it may be existing oil-by-rail shifting to a cheaper transportation route.

"You can't just say oilsands production is going to increase by the capacity of the pipeline, because it's going to shift around," Nic Rivers, the Canada research chair in climate and energy policy at the University of Ottawa, said in an interview.

He calculates additional GHGs from Kinder Morgan at about 10 million tonnes a year, with Line 3 significantly less.

The government, said Rivers, is "getting over 100 million tonnes a year from the kinds of policies they're promising. That's an order of magnitude bigger than the expected greenhouse gas increase from the pipelines' approval."

That hasn't stopped environmental groups from asserting the pipelines will steamroll Canada's climate ambitions. The advocacy group 350.org issued a release Tuesday stating that Trudeau "may as well have said that Canada is pulling out of the Paris climate agreement."

The federal government itself reported earlier this month that Canadians may not yet understand the "magnitude of the challenge."

In an interview, Ian Bruce of the David Suzuki Foundation cited two recent studies that found getting Canada to a low-carbon economy is going to be a long slog.

"If we did expand heavy oil pipelines, it puts such a tremendous burden on other sectors to reduce emissions that it becomes unfeasible," said Bruce.

It is incumbent on the first ministers next week to show otherwise, said Erin Flanagan of the Pembina Institute.

She hopes the prime minister and premiers clear the air next Friday after their climate meeting by providing a detailed accounting of policy measures and GHG reductions en route to Canada's 2030 target.

Adidas Nederland Vacature
Specifically in really hot environments, it is very important do up to you can to save on cooling down costs. 1 action you can take is to apply bushes and bushes to color your own home, and this together with other tactics could help you save much on electricity consumption and expenses.

1-Acknowledge that you need to change reasons for having yourself. Many people begin from the situation they are excellent which it's others that require to alter. But recognizing that you simply design your truth by means of how you see issues is the first step to personal development and pleasure.