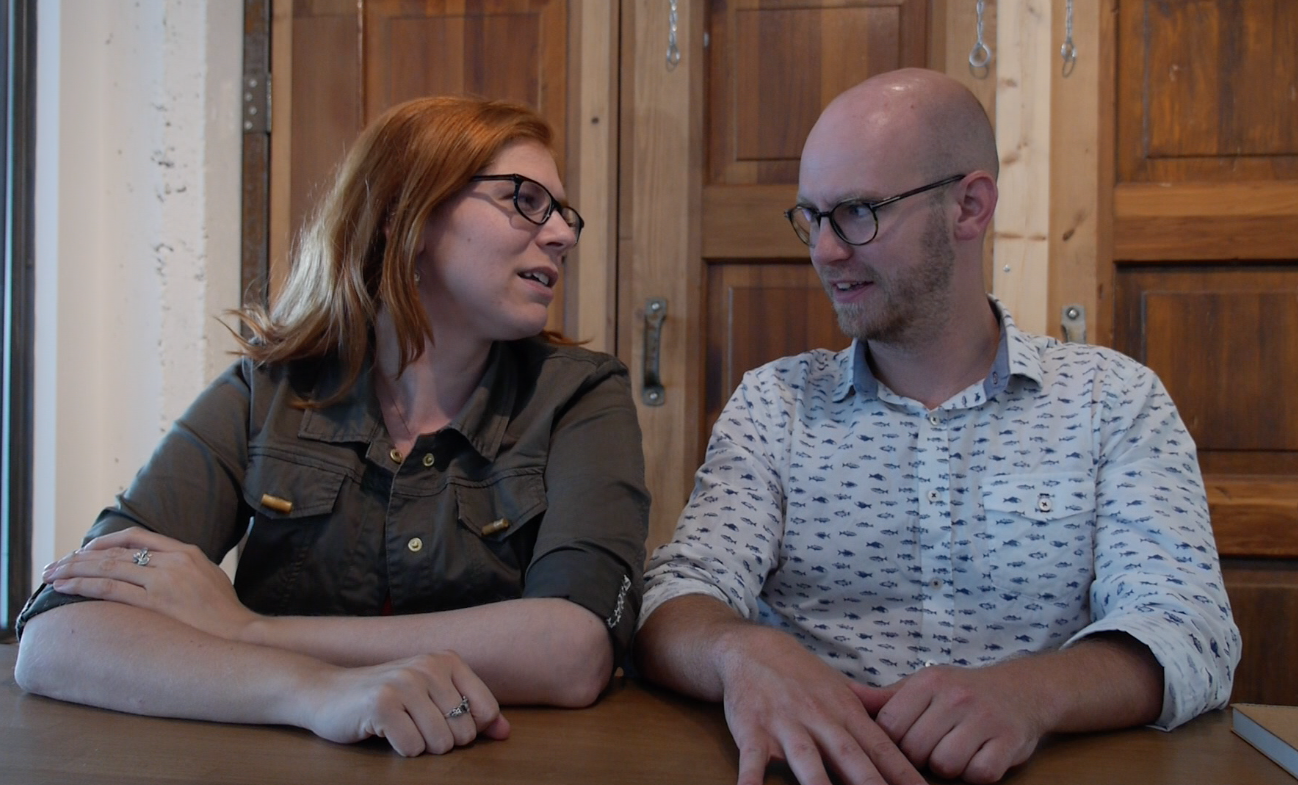 Emilie Nollet and Olivier Demers-Dubé speak about their startup from their office in Montreal on July 12, 2017. Photo by Clothilde Goujard
Previous story

Two young Montrealers hope to help change the harsh reality that fresh food is scarce or unaffordable for many people in places like Nunavik, the northern third of Quebec.

It’s a complex agricultural technique they want to make accessible to isolated communities for the first time in Canada. They're starting in rural Quebec, and plan to spread throughout the country.

Aquaponics is a symbiotic combination of aquaculture (fish farming) and hydroponics (growing plants in water). It allows farmers to grow crops like tomatoes, cucumbers, peppers, eggplants and strawberries in extra nutrient-rich water by connecting them to a tank full of fish or other aquatic organisms.

While the method isn't new, it's still unknown to many.

Nollet said the first time Demers-Dubé suggested the unique agricultural method could be used to grow food in isolated communities, she was like most people and answered, "aqua what?"

"That’s how it started," she said. "I found the idea absolutely amazing, and we joined both of our fields of expertise and EAU was born."

Montreal residents Olivier Demers-Dubé and Emilie Nollet may have a solution for community food insecurity through aquaponic farming. Video by Clothilde Goujard

Prior to launching EAU in 2015, Demers-Dubé hosted a radio show in Montreal focused on urban agriculture. He invited Nollet, who worked in the office of sustainable development at Université de Montréal’s business school, HEC Montréal, to discuss a business plan she’d created for an urban agriculture project. He was curious about the economic viability of urban agriculture.

They clicked immediately, and Nollet, who was keen on starting her own business, asked Demers-Dubé to join her.

They wanted to make fresh and local food accessible to all anytime of the year, especially in 'food deserts.' The term, referring to neighbourhoods where residents can't can't afford or access healthy food, is used by researchers and policy makers looking into inequality in health.

Food insecurity is defined as the inability to access sufficient safe and nutritious food. In Canada, one in six children is affected by food insecurity, which touches one in ten households in the country, in rural and urban environments.

The problem is particularly acute in the North. Food insecurity in Nunavut along should be considered a "national crisis," says University of Toronto nutritional sciences professor Valerie Tarasuk.

In Nunavut and Nunavik at least 55 per cent of Inuit residents live in households that experience food insecurity, according to federal government statistics published in February 2017.

These sorts of statistics fuel the work of Demers-Dubé and Nollet.

Here's how it works

In Canada, more than 80 per cent of the population lives in urban areas. Aquaponics, said Demers-Dubé and Nollet, can easily be incorporated into an urban setting through its closed, connected system.

The plants use nutrients produced by the fish to develop their roots and grow, and in the process, filter the water for reuse by the fish. In 2016, EAU launched a prototype, which works in a controlled environment that can be adapted to a northern climate.

“We isolate (the farm and crops) from outdoor temperatures. We control the lighting, the small wind, humidity," Nollet explained. "All the settings are controlled to have good harvests and to ensure we protect the crops from pests."

The pair has developed partnerships with families, community centres, farmers, small towns and First Nations communities in northern Quebec who have shown interest in their project. Their prototype farm was moved to Université de Laval in Quebec City last winter for use by researchers.

The goal is to make future farms even more efficient in northern climates. Aquaponics could be transformative in a place like Nunavik, said Annie Lamalice, a researcher on food security in northern Quebec. Despite programs like Nutrition North — which subsidize perishable food like milk and vegetables shipped to northern regions — food expenses are 48.3 per cent higher in Nunavik than in Quebec City.

“(An initiative like EAU’s) could improve the nutritional quality of products because when they travel long distances, they lose a lot of their properties,” she told National Observer. “However for the prices, we still have to see if it would be cheaper, especially if it’s an installation that works throughout the year, because the climate is fairly extreme and energy is very expensive.”

Lamalice has worked with locals to develop greenhouses that work for 20 weeks in the summer in Kuujjuaq, the capital of Nunavik. The project was adopted in part because it was “the most low tech possible.”

“With villages far away and isolated, since there’s no roads, whenever there’s a technical problems, you need to bring someone or some parts and that is often very expensive. So the ideal way (to tackle food security) is to have projects that can be completely managed locally,” Lamalice said.

Training local communities to use their farms

Demers-Dubé and Nollet of EAU have flagged this challenge and a big part of their mission is to make the use of aquaponics easy for everyone. Before selling and installing their farms, they adapt them to the community’s needs and practices.

“We use social innovation to ensure the implementation of a project will work well within the community," said Demers-Dubé. "So we start mobilizing the stakeholders in the area, we create a feeling of belonging around the project and then we co-create the farm."

“We design the farm to be sure it responds to the specific food, cultural and economic needs of the community, and finally, we train the community so that it can operate the farm by itself in a completely independent way and thus generate food resilience around this project.”

When they start working with a community, they meet with locals to first figure out their tastes and habits, and how much they’re able to pay for certain products. They also find out where people currently get their food, because Demers-Dubé said they don’t want to compete with or destroy existing food and agricultural resources.

Once they’ve identified the specific needs of the community, they begin training to enure the technology is as “user-friendly as possible.” Their training module lasts several months and includes aquaponics theory. It gets more practical as the farm gets built.

EAU said they plan to remain involved in all of their projects, even after the farms are operational.

“We’re not going to dump our farm and leave,” said Nollet. “We’re also going to stay for support. There will be data trackers so that we can follow from a distance and keep in touch with the communities.”

EAU is currently setting up farms in a dozen communities and plan to have between one and three active farms by the end of 2017 or soon after. The company has had so many requests that they’re preparing for a round of financing in the fall to better respond to the demand.

The global aquaponic farming market is expected to grow 10 per cent annually between 2016 to 2020, according to a market report by Sprout Intelligence, a business intelligence company specializing in the global agri-food industry. The idea for aquaponics was introduced in the mid-1970s and its environmentally-friendly practices have made it an alternative to conventional agriculture.

Research has shown that aquaponics can yield more product per area than conventional agriculture. The technique uses 90 per cent less water than traditional farming and produces six times more yield per square foot. Demers-Dubé and Nollet say their innovative vertical aquaponics farm could produce, for example, 10 times more lettuce per square metre than a traditional farm.

Among several one-off aquaponics projects built in Canada is one launched in 2016 and used as a food bank in Mississauga, Ont.

Researchers and practitioners are also looking at the benefits of aquaponics farming as climate change disrupts traditional agriculture.

"When (you are a victim) of severe weather, too much or not enough sun or rain, new pests and destabilization, because of climate change, eventually it's worth being indoors to have constant production cycles week after week during the year," said Nollet.

For the last two years Nollet was one of the Canadian business leaders at the G20 Young Entrepreneurs’ Alliance, where she saw interest from people in other countries in aquaponics.

“(Two years ago) in China, I noticed a lot of entrepreneurs were approaching me because they were seeing a lot of opportunities for their countries (with aquaponics farming),” Nollet said.

“It’s people who want to contribute to their countries and to have a job that gives them meaning. And having heard my pitch, they realized it’s not just a food production project, it’s a project within a context that is preparing and adapting to the future and to communities and ultimately creates value.”

Kindly correct several typos:
+ "Food insecurity in Nunavut along should be considered a "national crisis," "
+ "since there’s no roads, whenever there’s a technical problems," (2)
+ "EAU is currently setting up farms in a dozen communities and plan to have "