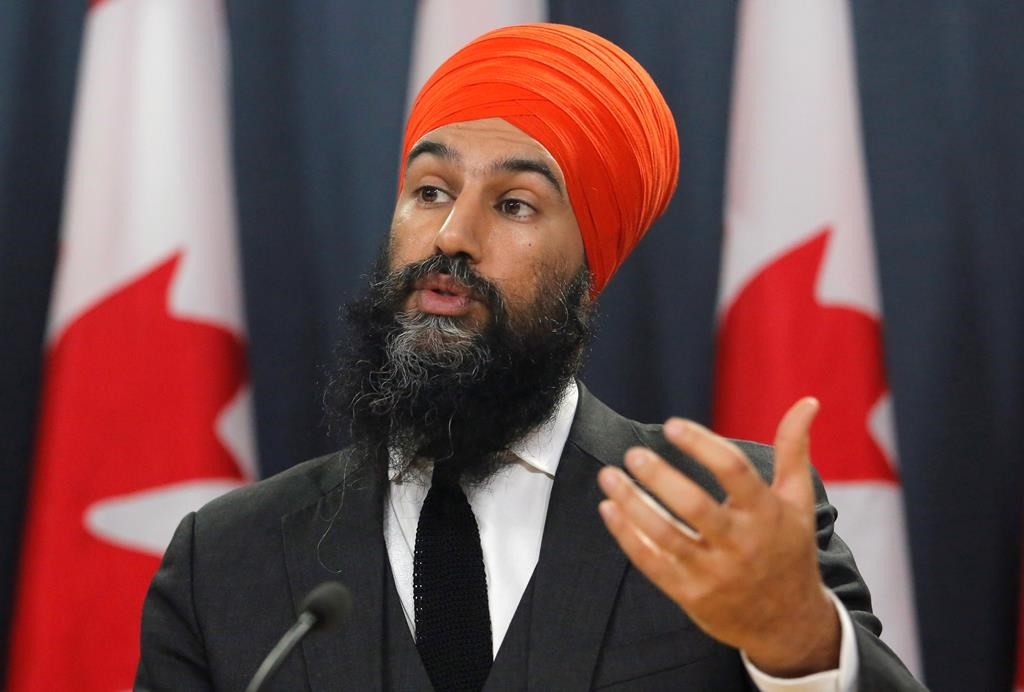 NDP leader Jagmeet Singh speaks at a press conference as he unveils the NDP's top priorities ahead of the federal budget on Tuesday, February 13, 2018. Photo by The Canadian Press/ Patrick Doyle
Previous story

New Democrats from across the country will begin gathering in the national capital on Thursday, hoping to lay the groundwork for victory in next year's federal election — and to confront deep divisions and challenges within their party.

NDP leader Jagmeet Singh kicked off the festivities a few days early by laying out Tuesday what he wants to see in the Trudeau government's federal budget, which will be unveiled Feb. 27.

The demands include a universal pharmacare program, more money for affordable housing, an end to boil-water advisories on First Nations and more protections for workers' pensions when companies go bankrupt.

Singh has distanced himself from Tom Mulcair's commitment that an NDP government would stick to a balanced budget, saying as recently as last week that he opposes "austerity" and supports stimulus funding when required.

But the NDP leader indicated Tuesday that the costs of the pharmacare program, at least, could be covered if the Liberals close a controversial tax loophole for stock options, which critics say benefits the wealthy, and crack down on tax havens.

"The government has shown that it just doesn't get it when it comes to what workers are going through," Singh said. "While they've said a lot of fancy words on addressing inequality, they haven't yet produced the results that people need now."

The NDP had sponsored an opposition motion echoing their leader's demands for action on the so-called stock-option deduction and tax havens in the budget, but the Liberals voted it down.

On the surface, Singh's demands look like the foundation of a possible NDP platform for the 2019 election. They also bear a striking resemblance to some of the policy proposals that New Democrats will debate at their convention this weekend.

The list of policy proposals, released Tuesday, includes a heavy emphasis on Indigenous rights as well as pharmacare, environmental sustainability, more support for refugees, the decriminalization of all drugs, and free university tuition.

Yet the list also includes potential landmines that could deepen the already sharp divisions over pipelines and natural resources, symbolized, in part, by the feud between Alberta and British Columbia over the Trans Mountain pipeline.

Among the more explosive policy proposals is one, sponsored by 12 riding associations, that explicitly opposes the pipeline. Another calls for widespread protests against pipelines and fracking.

Neither Alberta Premier Rachel Notley, whose government supports Trans Mountain, nor B.C. Premier John Horgan, who opposes it, will attend the convention, even though they lead the only two NDP governments in the country.

The resolutions also include — among many other things — calls to censure Israel and support the Palestinians; for the government to cover birth control for women and medical treatments for trans people; and for Canada to leave NATO.

There are also several resolutions calling for the party to formally adopt the Leap Manifesto, a controversial treatise that divided the New Democrats during the party's last convention because of its opposition to fossil fuels.

Leap organizers will hold a special event on Thursday, before the NDP convention begins, that will host speeches by advisers to Bernie Sanders, who ran for the Democratic presidential nomination in the U.S. in 2016, and British Labour leader Jeremy Corbyn.

Avi Lewis, the documentary filmmaker who has championed Leap along with his wife, author Naomi Klein, acknowledged in an interview that the manifesto created a "split" inside the party — but that split, he said, is between the party's leadership and its grassroots members.

Sanders and Corbyn represent many of the ideals behind the manifesto, Lewis added, and the level of enthusiasm that they have generated in their respective countries shows "surging momentum on the left."

Aside from potentially divisive policy resolutions and the manifesto, New Democrats are also expected this weekend to do some soul-searching following allegations of harassment and sexual misconduct involving MPs.

Delegates at the convention will be presented with an updated anti-harassment policy that has been in the works for several months and will include guidance for raising and handling complaints.

The party also plans to hold training sessions for delegates who want to attend, and will increase the number of "anti-harassment co-ordinators" and make them more visible during the convention.

Singh, meanwhile, said Tuesday that the party is reviewing its internal policies following allegations of sexual misconduct against former Nova Scotia MP Peter Stoffer. But he couldn't say if that would include interviews with former staff.

Stoffer has acknowledged some of his actions may have caused discomfort and has apologized for that, but denied sexually assaulting or physically abusing anyone.

Singh also recently launched an investigation into allegations of harassment against current MP Erin Weir after another member of caucus said she had heard concerns from female staff members about harassment.

Weir has denied any wrongdoing.

If the federal NDP wants my

If the federal NDP wants my vote, it will have to make a firm commitment to oppose the construction of any new pipelines, including the Kinder Morgan TransMountain pipeline. There is no trade-off possible.