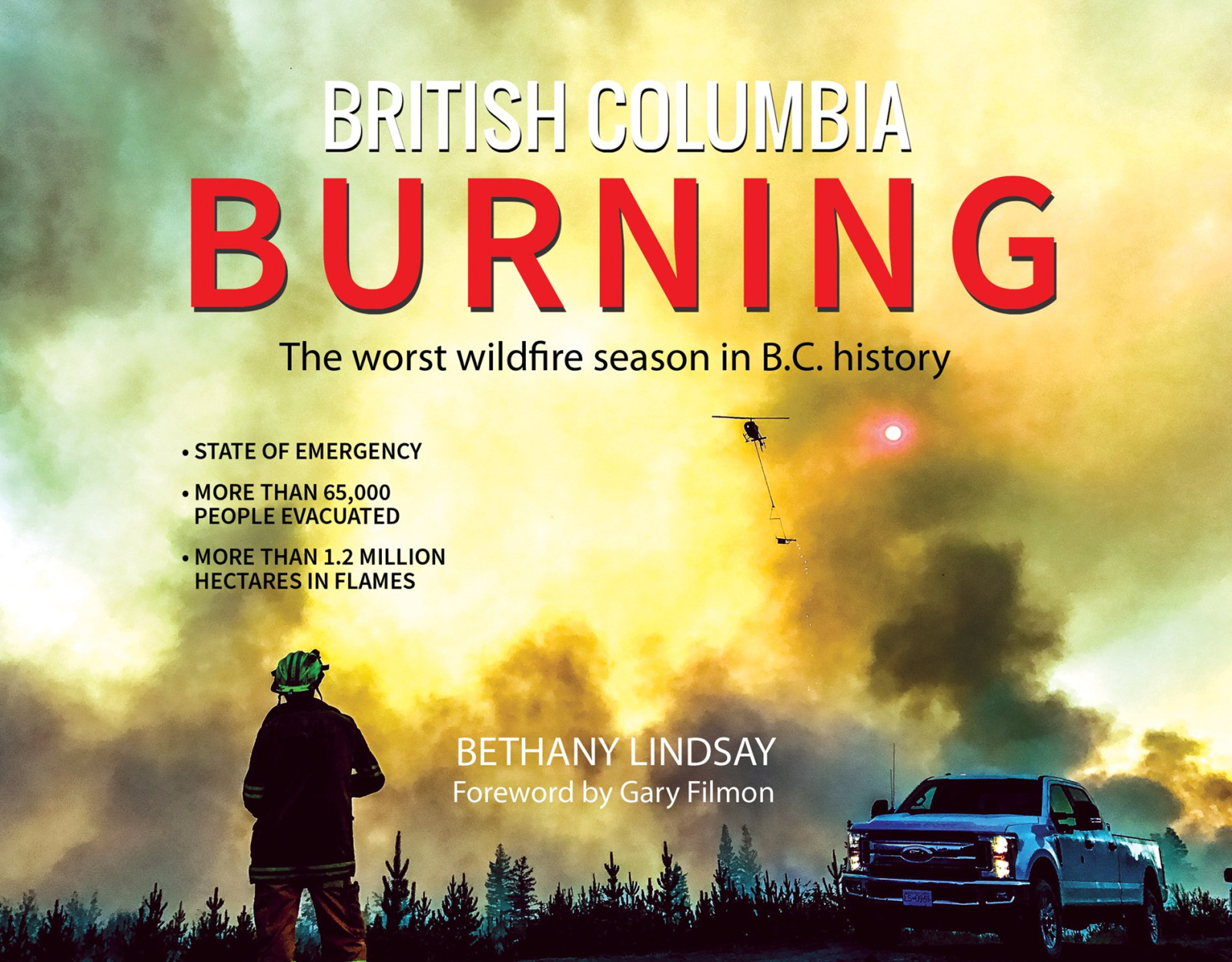 Last summer’s devastating fire season was definitely one for the history books — it destroyed the most territory, saw the single largest fire in B.C.’s history and held the province in a state of emergency for more than two months.

In British Columbia Burning, author Bethany Lindsay does an in-depth investigation into what happened last summer, also taking a look back at the history of wildfires in B.C. and a peak forward at the possibilities for both preventing and fighting them.

Woven throughout her book are stories, both personal and professional, about what it was like to live through the worst summer ever in B.C. Those stories are snappy, spare and smart — a style that comes with Lindsay’s background as a news reporter.

Lindsay drives home the point that climate change and a lack of preparedness by the province made the firestorm possible, while also ferreting out a few happy tales – those of pets who miraculously survived and cabins that somehow remained untouched.

There are more than 100 full-colour stunning photographs, collected by photo editor Kelly Sinoski. (Full disclosure: Both Lindsay and Sinoski are friends of mine and we all worked together in the past at the Vancouver Sun.)

Gary Filmon, who reviewed the 2003 Kelowna fires for the province, writes the book’s foreword, saying wildfires are “Mother Nature’s final solution to the neglect and/or mismanagement of our forest resources.”

In 2003, Filmon recommended clearing much of B.C.’s forests of potential wildfire fuels, but as Lindsay writes, more than a decade after his report came out, just 10 per cent of that work was done, possibly enabling the tragic events of 2017.

But Lindsay also recognizes that preventing fires is a nearly impossible task.

“If there’s a way to make an environment 100 per cent fireproof – beyond drowning it in ocean water or burying it beneath a glacier – we have yet to find it,” she writes.

July 7 was a flashpoint in last summer’s fire season – lightning struck more than 49,000 times in B.C. that day, sparking more than 100 new fires. Lindsay cites research in the United States that found that for every degree of warming, there’s about a 12 per cent increase in lightning strikes. Environment Canada, curiously, says it has no information on any such correlation.

Lindsay drives home the point that climate change and a lack of preparedness by the province made the firestorm possible, while also ferreting out a few happy tales – those of pets who miraculously survived and cabins that somehow remained untouched.

This book is both entertaining and informative – it’s a quick read, chock full of research, statistics and human stories. Readers hear from not only the experts, but also the firefighters who were on the ground and the people who were forced to flee from their homes.

Lindsay leaves us with plenty to think about, most particularly about how to prepare for the future.

“Recent research suggests that if average temperatures rise by just four degrees before 2080, the average size of wildfires in the southern British Columbia Interior could more than double, wildfire season could become 30 per cent longer, and summer fire intensity could soar by 95 per cent,” she writes.

We better do all we can to prevent such a future. Reading this book is a good first step.

People at Environment Canada should read the scientific studies made on the relation between lightning and forest fires.
The Goddard Institute for Space Studies (GISS) general circulation model (GCM) is used to study the possible implications of past and future climate change on global lightning frequencies. Two climate change experiments were conducted: one for a 2X CO2 climate (representing a 4.2ºC global warming) and one for a 2% decrease in the solar constant (representing a 5.9ºC global cooling). The results suggest a 30% increase in global lightning activity for the warmer climate and a 24% decrease in global lightning for the colder climate. This implies an approximate 5-6% change in global lightning frequencies for every 1ºC global warming/cooling.
Closer to us, Wotton and Flannigan (1993) used the Canadian GCM to predict that fire season length across Canada would increase by 30 days in a 2X CO2 climate, with fire seasons beginning earlier. An increase in lightning frequency across the northern hemisphere is also expected under a double CO2 scenario (Rosberg et al. 1990, 1996; Price and Rind 1994). Gillett et al. (2004) reported a positive relationship between increasing area burned and increasing temperatures in Canada over the past four decades; warmer temperatures are also expected to contribute to increased lightning activity (Price and Rind 1994).
Predictions of changes in fire occurrence in response to climate change are made by developing relationships between lightning and human-caused fires and current weather and fire danger conditions, and applying these relationships with GCM climate data to forecast fire occurrence. Using this approach, Wotton et al. (2003) projected a 50% increase in human-caused fires in Ontario by 2100 AD. Similarly, Krawchuk et al. (2009) predicted an 80% increase in lightning-caused fires in northern Alberta by the end of the 21st century. Most recently, Wotton et al. (2010), using two GCMs, investigated both human and lightning-caused fires across Canada under both a 2XCO2 and 3XCO2 ( -2100 AD) scenario, and projected increases in fire activity by the end of the 21st century of 75 to 140%, depending on the CGM used.
(source: Ontario Ministry of Natural Resources (2011): "Climate Change, Carbon Sequestration and Forest Fire Protection in the Canadian Boreal Zone")
(source: Natural Resources Canada, Oct. 09, 2013: "Anticipating the consequences of climate change for Canada's boreal forest ecosystems")
Canada's forests have become a major source of greenhouse gases. An average of 9,000 fires burn more than 2 million hectares each year in Canada. This is twice the average area burned in the early 1970's ( in 2015, 2.5 million hectares of forest burned and 1.8 hectares were affected by insects, resulting in net total emissions of around 221 million tonnes of carbon dioxide equivalent). Scientists at the NRC's Canadian forest Service predict another doubling or more by the end of the century, because of warmer temperatures expected as a result of climate change.
(source: Natural Resources Canada, Dec 04, 2013: "Peatland fires and carbon emissions")