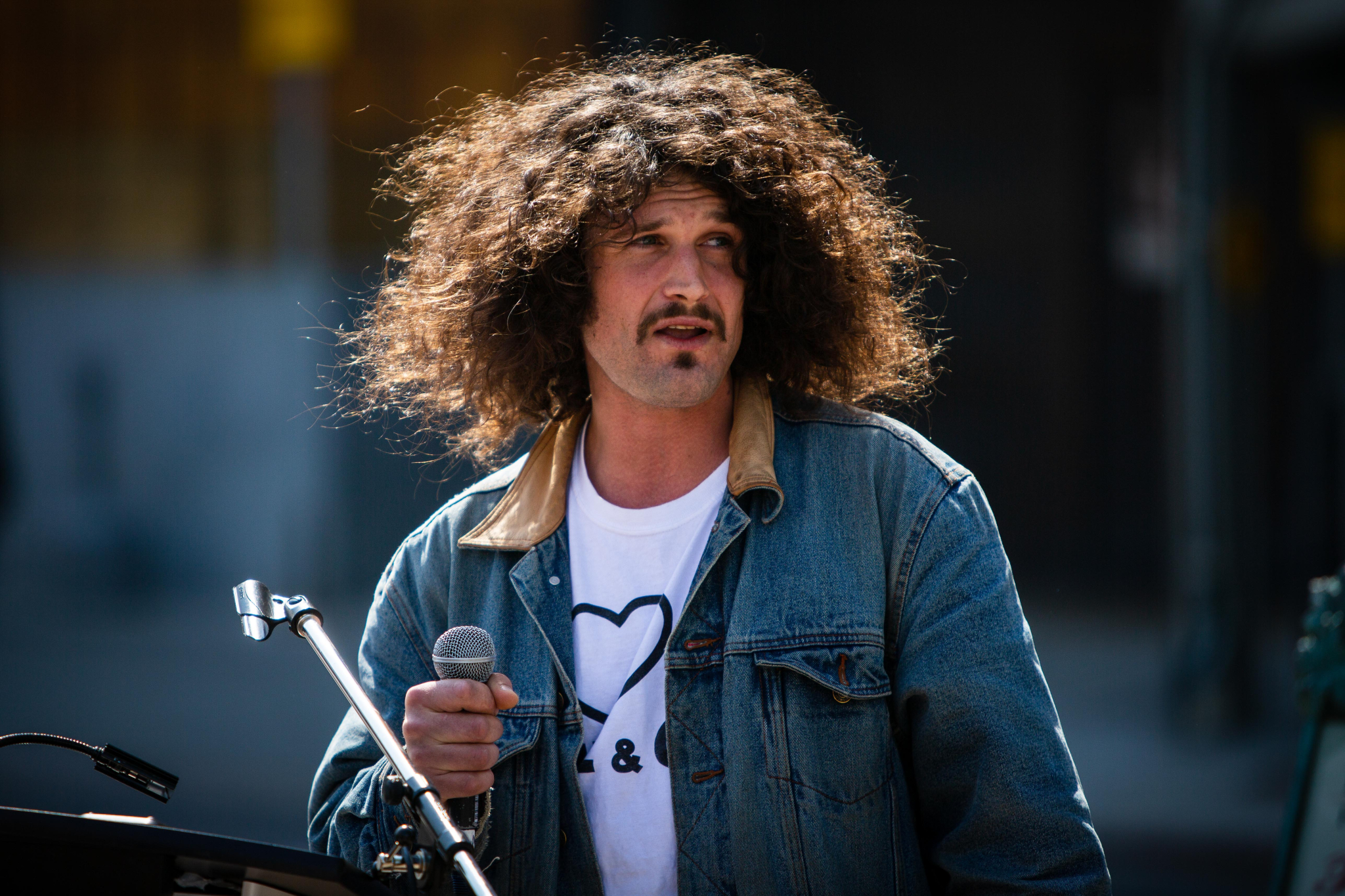 Bernard Hancock speaks at a rally on May 23 in front of Parliament Hill in support of Kinder Morgan’s Trans Mountain pipeline expansion. Photo by Alex Tétreault
Previous story
Next story

The pro-pipeline signs unloaded in bulk from a car in front of Parliament Hill were too many for those in the small crowd who wanted to hold one, and unused ones kept getting blown over in the wind.

Still, the blustery weather didn’t deter Bernard Hancock, a former roughneck in Alberta's oil patch, from stepping up to the mic at a tiny rally on Wednesday, May 23, in support of Kinder Morgan’s Trans Mountain pipeline expansion.

The gathering coincided with a Canadian Chamber of Commerce "day of support" for the pipeline, consisting of a delegation of business, Indigenous and labour leaders who said they would meet with parliamentarians.

“This is probably the first time in my life that I’m no longer proud to be a Canadian,” Hancock told a gathering of about a dozen people, in addition to MPs, political staffers, organizers and media.

At a separate venue, Perrin Beatty, the Chamber’s president and CEO, was critical of the British Columbia NDP government's moves to block the pipeline, given that the project has received federal government approval.

"They're entitled to their views, they're not entitled to ignore the rule of law," said Beatty. “All of us recognize the tremendous benefits this project will bring to Canada."

David Chartrand, president of the Manitoba Metis Federation and vice-president of the Metis National Council, said Indigenous people are “being used” by anti-pipeline protesters, even though Kinder Morgan has “done due diligence” on Trans Mountain.

Earlier that day on the Hill, Hancock's hair was being tossed by the wind as he spoke about his frustration with political delays over the pipeline.

“Every day, I get out of bed, and the first thing I do, I look on my phone to Twitter or Facebook, and already I’m angry. There seems to be a common —”

Just then, someone yelled something that made Hancock sigh loudly. “I’m sorry, it’s just been such a long time, and I’m coming to say the same, dumb talking points,” he said.

The rally was organized by Canada Action Coalition, a Calgary organization registered as a non-profit and Rally4Resources, which describes itself as a “grassroots” campaign.

In 2015, DeSmog Canada, now called The Narwhal, alleged connections between Canada Action, the oil industry and the Conservative Party of Canada.

James Robson, who described himself as the only full-time staffer for Canada Action Coalition as well as its spokesman, called the group “pro-energy, pro-resource, pro-Canada" in an interview.

“It’s about time that Canada actually got a pipeline to tidewater, so we can export at least a small amount of our hydrocarbons,” he said.

Asked what he thought of the concerns raised by the Tsleil-Waututh Nation that the federal government may have concealed evidence in its approval of the west coast pipeline, as well as concerns over the risks of environmental damage from a pipeline spill, Robson said people are “entirely entitled to their opinion.”

The Tsleil-Waututh’s territory includes the Burrard Inlet, off the coast of Metro Vancouver, which would see a seven-fold increase in oil tanker traffic and would be the site of a major oil terminal in Burnaby. As well, scientific reports have raised concerns over a lack of research over the effect of a spill.

'We know the NDP elsewhere can have different perspectives'

“I know that most of you have never rallied or protested or demonstrated for anything in your lives,” said Stubbs. “But you are on the front lines of what is the most critical fight for Canada’s economy, for our country’s ability to create jobs, to reduce poverty, to employ the middle class."

Earlier this month, Stubbs took a shot at the Trudeau government over its promised legislation to “reassert” Ottawa’s control over the pipeline project. On Wednesday before caucus, Natural Resources Minister Jim Carr said such a bill was still being considered, as are "all options."

In Question Period on Tuesday, NDP MP Rachel Blaney said that plan amounted to "billions for Kinder Morgan shareholders." She asked how it was possible that this money was available, but not billions of dollars to end boil water advisories across the country.

Prime Minister Justin Trudeau replied that his government was "fully on track" to end the boil water advisories, and then asked a query of his own:

Federal Liberals and Alberta politicians are arguing to increase our dependence on the fossil fuel industry that is taking our planet to the brink, rather than shifting our investments into more ethical and economically viable renewable energy infrastructure.

Meanwhile, according to an article today in the Guardian, a study published in Nature estimates a 30 trillion dollar saving if we globally manage to cap warming to 1.5C. And an article in CBC tells us that Northern Alberta is facing drought conditions and severe wildfire risk again, before it has fully recovered from the damage to Fort MacMurray two years ago. Homeowners in the BC Interior have lost their properties and livelihoods to historic flooding, as have many in New Brunswick this year. Residents in northern Manitoba are being rescued from raging wildfires there. And climate data shows us an inexorable rise in global mean temperature over the past several decades, putting paid to the nonsense that "we can't ascribe single events to climate change". Check out this Bloomberg graphic. Not exactly a leftwing bastion.
https://www.bloomberg.com/graphics/hottest-year-on-record/

How many homes, livelihoods, and lives have to be risked or lost before we imagine an energy future that is less harmful? The technology already exists for us to expedite a shift, and instead, our so-called leaders are still content to ignore science, ignore the losses and costs, and shill for the fossil fuel industry that has already profited for decades from environmental destruction, in part through wilful misinformation campaigns. Active commuting by bike, foot, or transit could also provide a big component of the solution to our rising obesity and ill health. Not all, but many of us could make this change, and reduce our reliance on fossil fuels.

I'm sorry for the guy who doesn't have a girlfriend or a car, and would like a job in the oil or pipeline industry, but soon all our kids won't have a future to feel hopeful about, and many species will be extinct. I'm much more concerned by that. Why aren't our leaders more concerned about that?

Unifor, which represents oil and gas workers at the Parkland (formerly Chevron) refinery in Burnaby BC and 300,000 workers across Canada, is opposed to the Kinder Morgan expansion, and all other pipeline projects which would export bitumen to refineries outside Canada. The primary reason for this is that these projects do not create jobs and are inconsistent with Canada's greenhouse gas reduction commitments. Unifor is calling for a National Energy Strategy that includes "binding and ambitious greenhouse gas emissions targets", and an "ambitious green energy investment plan".
Similarly to the general population, there is a growing awareness within the labor movement about the economic and environmental impacts of producing and exporting bitumen.
(source: www.unifor950.com/case-against-tar-sands-pipelines)

They think the benefits will

James Robson, Canada Action Coalition: “It’s about time that Canada actually got a pipeline to tidewater, so we can export at least a small amount of our hydrocarbons,” he said.

The Canada Action Coalition is severely truth-challenged. So are Notley and Trudeau.
AB oil already has access to tidewater, not only from the port of Vancouver, but also from the U.S. Gulf coast.
Only 15 oil tankers loaded in the port of Vancouver in all of 2016. Overseas shipments are exceedingly rare. In 2016, 99% of Canada’s oil exports went to the U.S.
• w w w [dot] nationalobserver [dot] com/2017/08/21/opinion/canada-can-win-saying-yes-bcs-sustainable-future
Notley has never provided evidence of higher prices for AB dilbit overseas. All the evidence suggests the opposite. Economist Robyn Allan: "If offshore markets promise higher prices, any reasonable businessperson would expect AB’s producers would have used it. They didn’t."