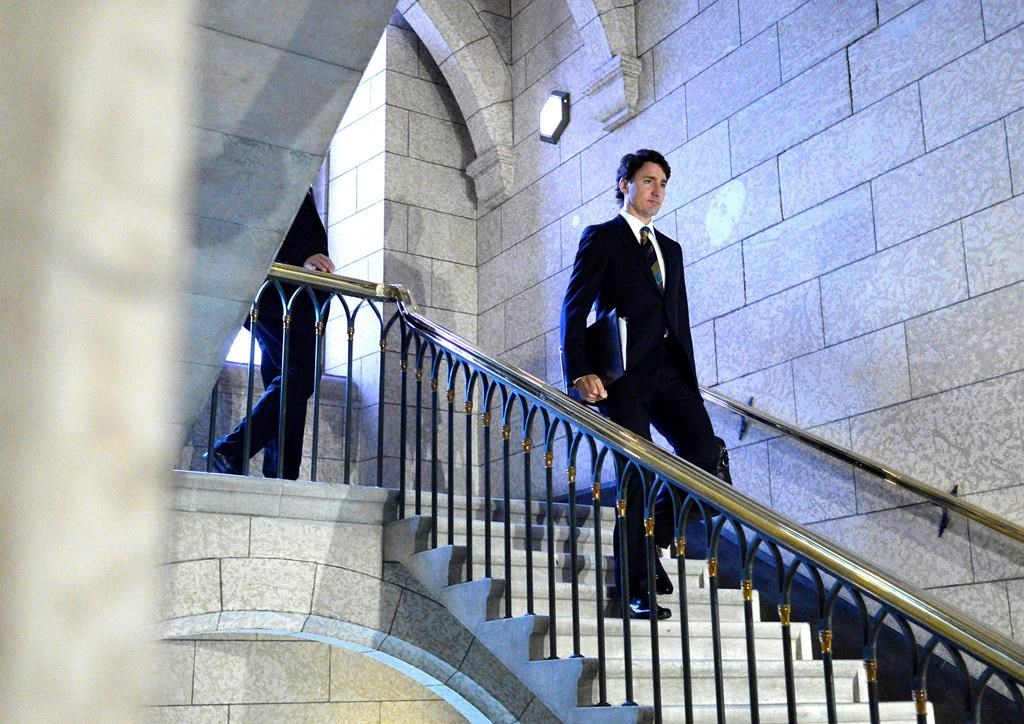 Prime Minister Justin Trudeau walks to Question Period in the House of Commons on Parliament Hill in Ottawa on Monday, June 4, 2018. Photo by The Canadian Press/Justin Tang
Previous story
Next story

Prime Minister Justin Trudeau linked Indigenous reconciliation and the expansion of the Trans Mountain pipeline Tuesday as he met with a group in British Columbia that monitors construction of the project and chatted with an Indigenous chief who denies climate change.

Trudeau told the Indigenous Advisory and Monitoring Committee that while he doesn't take the presence of First Nations' leaders at the meeting in Rosedale as direct approval for the pipeline, he does see their attendance as support for reconciliation that both sides need to work on.

He said the purpose of the committee is to make sure the project is done right, with minimal concerns and maximizing benefits.

Among the committee members is Chief Ernie Crey, who recently told media outlets the Cheam First Nation would consider buying a stake in the pipeline, depending on the circumstances and what's involved. Crey has said the expansion project will benefit his community, located near Chilliwack, B.C.

Crey is one of the most vocal Indigenous supporters of the pipeline project, regularly posting commentary and sharing articles promoting the project through social media. He also recently told Vice News in an interview for a documentary that "the jury is still out" on whether climate change is caused by humans.

"I'm not a scientist, I don't know for sure," he said to Vice News. "But I'm not convinced the jury is really in on the role of, the contribution of human settlements to climate change. I don't think the jury is in, finally."

Crey's comments run counter to accepted scientific evidence showing that human activity, including the burning of fossil fuels such as the heavy oil produced in Alberta's oilsands region, is warming the planet and causing dangerous changes to ecosystems that threaten life on Earth.

Opponents of the Trans Mountain expansion project have said that new pipelines should be stopped to prevent further expansion of fossil fuels that would exacerbate climate change and threaten the economy.

The federal government is spending $4.5 billion to buy the pipeline from Kinder Morgan to ensure the expansion goes ahead.

Indigenous groups may invest in the pipeline

About three dozen people protested outside the meeting, including Eddie Gardner of the Wild Salmon Defenders Alliance, who says Trudeau is "deluded" if he thinks the project is compatible with the environment.

A federal government source says more Indigenous groups support the Trans Mountain's expansion project than oppose it, and there's more of an opportunity for them to participate in the economic benefits of the project now that it will be owned by the government rather than a private company.

The source added "it's possible" that the government would backstop Indigenous groups to enable them to buy a stake in the pipeline or they could also be included in any market-driven offer to purchase it.

Finance Minister Bill Morneau said in Calgary last week that many parties have expressed interest in investing in the project, including Indigenous groups.

Several First Nations remain staunchly opposed to the $7.4-billion expansion project, which would triple capacity of the pipeline running between Edmonton and Burnaby, B.C.

Some Indigenous groups have launched legal challenges against the project, arguing Ottawa did not adequately consult First Nations communities before it was approved, violating their rights.

Trudeau was also scheduled to be in Edmonton later Tuesday to visit a Kinder Morgan terminal.

Editor's note: This article was updated at 4:50 p.m. ET on June 5 with new comments by Ernie Crey, reported by Vice News.

Trudeau sinks to further depths by cavorting with climate change denialists, and calls that reconciliation?

Everyone really needs to read

Everyone really needs to read the new book, Policing Indigenous Movements: Dissent and the Security State by Crosby and Monaghan and then they will not be surprised when the army is called in.

Reconciliation with a native

Reconciliation with a native leader who denies human responsibility for rapid climate change? That's not surprising...you have to deny our role in climate change to push bitumen pipelines and double down on tar sands for another 40 years.

What's surprising is that there isn't more outcry against that kind of luddite thinking. Sure, its too bad burning fossil fuels warms the planet, but that it does so is a scientific fact.

Trying to spin Mother Nature isn't going to work for any of us. Where are all the voices of reason and reality making it impossible for this kind of guff to still have traction??

Time to step up resistance to business as usual, and the reconciled buddies who intend to profit from it.

Many of us are hoping that

Many of us are hoping that after October 2019 Justin will be linked with former PM's who only served one term. We can't afford his divisive politics.