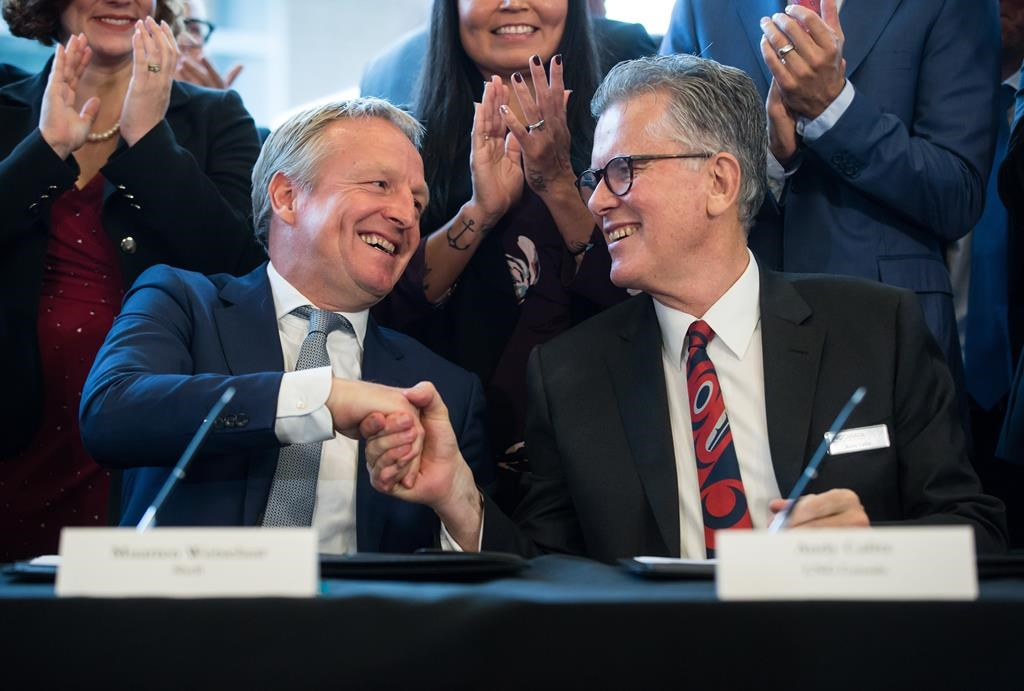 Final approval for a massive liquefied natural gas project in northern British Columbia shows that major resource projects can be built in the province, the CEO of LNG Canada said Tuesday.

The future of major energy projects in British Columbia has been at the centre of a debate because of the provincial NDP government's opposition to the Trans Mountain pipeline. But Andy Calitz said the LNG plant that's planned for Kitimat on B.C.'s coast and a 670-kilometre pipeline delivering natural gas from the northeast corner of the province shows the way forward.

"It validates the reality that in B.C. projects can be done if it is done in the right way when it comes to resource development through a process of building relationship before we build the project," he said.

Prime Minister Justin Trudeau said the project is an example of his often repeated position that exporting Canada's energy resources is possible while also protecting the environment.

"We can't build energy projects like we did in the old days, where the environment and the economy were seen as opposing forces," said Trudeau.

"In the 21st century, we don't have to choose between a healthy environment and a strong economy. They must go together."

The five partners in the LNG project have agreed to a $40-billion joint venture. Trudeau said the amount being spent is the largest single investment by the private sector in Canadian history.

Each company will be responsible to provide its own natural gas supply and will individually market its share of liquefied natural gas.

The first liquefied natural gas is expected to be shipped before the middle of the next decade.

Calitz said the project received support from the B.C. government, local First Nations and the Kitimat community — and LNG Canada is ready to proceed with construction.

B.C. Premier John Horgan said the project will help a region of the province that needs jobs.

"This is a generational opportunity for northern British Columbia, one that could not be passed up," he said.

"Adding such a massive new source of (greenhouse gases) means that the rest of our economy will have to make even more sacrifices to meet our climate targets. A significant portion of the LNG Canada investment will be spent on a plant manufactured overseas, with steel sourced from other countries," he said in a statement.

"B.C. taxpayers will subsidize its power by paying rates twice as high and taking on the enormous public debt required to build Site C. There may be as little as 100 permanent jobs at LNG Canada. I believe we can create far more jobs in other industries that won't drastically increase our emissions."

Horgan's minority NDP government only governs because of the support of the Green party and the premier said the province realizes the challenge the project brings for its climate change goals but it plans to work with the companies to drive down emissions.

Horgan acknowledged Weaver's concerns, but added he doesn't share them: "I believe we that can meet the objectives we set for ourselves over the next 12 and then 23 years."

B.C.'s climate plan means the province has agreed to cut carbon emissions to levels that are 40 per cent below what they were 2007 by 2030. The plan also saw the province increase the carbon tax by $5 a tonne on April, 1, with the same increase planned annually until 2022.

Clean energy advocate Pembina Institute said it is still waiting for the provincial government to reconcile LNG's carbon pollution with its climate goals, criticizing the project for taking B.C. "in the wrong direction."

The province has also promised to repeal its LNG income tax and streamline how taxes are administered, saying in a statement that the current tax "has led to uncertainties hampering investment."

Horgan said he expects the NDP will be able to get support for the tax changes in the legislature.

Updated at 526 PM ET with new quotes and photo.

"It's our expectation that there will be vigorous debate from every corner of the legislature, but at the end of the day ... this is not about a political party, this is about the people of British Columbia, the British Columbia economy, and people have been working on this for a long, long, long, long time, and I am fairly confident that partisan politics will not get in the way of the single largest private-sector investment in Canadian history."

Coastal GasLink is building the gas pipeline and it has negotiated agreements with the elected councils of all 20 First Nations on the route.

Karen Ogen-Toews, CEO of the First Nations LNG Alliance, called the final investment decision "great news for the B.C. economy, for Canada, and for First Nations."

"Responsible LNG development means real benefits to Indigenous Peoples and communities, long-term careers and reliable revenue to help First Nations close the economic gap between their members and other Canadians."

Why isn't the media on top of

Why isn't the media on top of this story. Yes, they boast about BC finally agreeing to an LNG industry. Why though have they omitted telling their readers that horizontal, hydraulic fracturing and all of its' inherent pollution and destruction is an integral component?

And as a result of the

And as a result of the Premier Horgan/PM Trudeau LNG union they want us to convert back to hydro in order for them to rejig their carbon plan while they plough forward selling BC's gas to the world. Total insanity....and no, I will not return to electric baseboard heating. It is not economically viable for heating purposes in today's BC Hydro two tiered billing system world.

B.C. climate targets mean major changes for ordinary citizens.
Hundreds of thousands of British Columbians will need to switch to electric heat, install energy-saving devices like heat pumps and purchase electric vehicles if the NDP government has any hope of meeting its climate targets after approving a new liquefied natural gas industry.

Premier John Horgan’s government has begun to shed light on how it expects to meet pollution reduction goals after LNG Canada approved its $40-billion terminal and pipeline in Kitimat.
https://www.timescolonist.com/business/b-c-climate-targets-mean-major-ch...