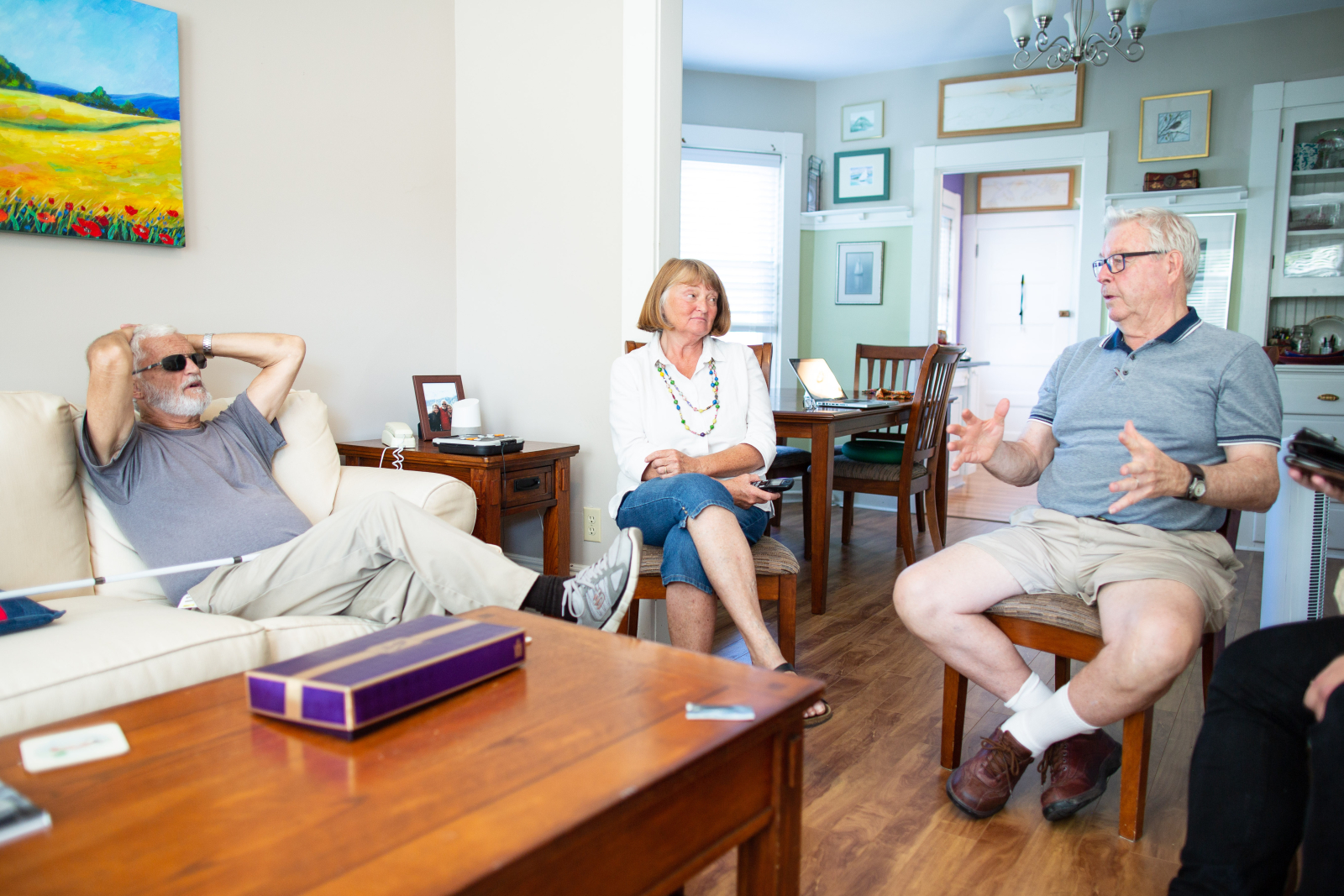 Bill and Ted were sitting together in the living room when Ted spoke up.

"If you're going to claim that there will be all sorts of damage, or that the risk is high, you have to prove that. That's an assertion,” Ted said to Bill.

Bill looked surprised. "Don't you think we should just turn away from stuff like this?" he shot back. "Turn away from drilling for oil?”

Bill and Ted aren’t the characters in the goofy 80’s movie Bill & Ted's Excellent Adventure — although they’re just as animated.

Bill and Ted — along with 62-year-old retired teacher Margaret Long, who is Bill’s wife — spoke to National Observer on Sept. 17, 2018 at the Long household in Lunenburg, Nova Scotia.

Lunenburg is a seaside community about an hour’s drive southwest of Halifax that depends heavily on tourism. It is perhaps best known as the home of the Bluenose II, a replica of the famous "Queen of the North Atlantic" sailing ship that appears on the Canadian dime.

The town of about 2,300 residents is also known for its colourful buildings along Lunenburg Harbour, which has earned it the status of a UNESCO World Heritage Site.

But the topic of debate between Bill and Ted that day wasn’t anything around town — it was deepwater oil and gas drilling 330 kilometres off its coast.

Their debate encapsulates the conversation happening in provincial capitals across the country, and in the halls of Parliament: should Canadians still be saying yes to more fossil fuel infrastructure?

“It is just absolutely not worth the risk,” said Margaret. “We have few industries, and the fisheries and the ecosystem is not a small matter.”

'You have to ween yourself away'

BP, the giant fossil fuel company associated with the Deepwater Horizon disaster in the Gulf of Mexico, has been running an exploration well called Aspy D-11 in the Scotian Basin, southeast of Nova Scotia since April 2018.

BP Canada Energy Group has applied to carry out exploration drilling, in search of oil or gas, "consisting of up to seven exploration wells" over three years, starting this year.

Eight billion barrels of oil and 120 trillion cubic feet of gas is buried underwater in the area, according to the Nova Scotia government.

The development of these resources is expected to bring jobs, royalties and other “significant economic activity for our communities and for the ocean-sector service and supply chain,” the government says.

Like Kelly, many in the province who are not swayed by the promise of economic development, see continued fossil fuel development as a temporary necessity while renewable sources of energy are developed.

“You have to ween yourself away, you have to find a viable alternative,” said Kelly. “It's not an easy thing. You can't just say let's stop this oil right now...it's not viable, it takes a while.”

Yet others on Nova Scotia’s south shore are concerned about the risks of deepwater drilling to the local tourism and fishing industries, should there be a major spill.

The Longs, for example, have a sign outside their home that reads: “Offshore drilling not worth the risk.”

It’s from the Campaign to Protect Offshore Nova Scotia (CPONS), a project launched by a local chapter of the Council of Canadians, that wants to see a moratorium on exploratory offshore oil and gas drilling until a provincial inquiry is launched.

Rogers said the Nov. 6-9 fall conference of the Nova Scotia Federation of Municipalities could allow for an “emergency resolution” on the issue if municipalities agree.

On Monday, Fisheries and Oceans Minister Jonathan Wilkinson was in Lunenburg to announce funding for nine associations and companies in the fish and seafood sector.

Rogers said he and the council’s Marion Moore greeted him with the “not worth the risk” signs.

For Bill, BP’s drilling is an example of how the industry is headed in the wrong direction.

“My view is — hey, c’mon, it’s time to bite the bullet, and get away from any utilization of any possible new fossil fuel,” said Bill. “Hundreds of miles of shoreline from here to Yarmouth — it’s just madness that we would risk that.”

His worry was heightened this summer, when 136,000 litres of a toxic mud spewed into the ocean from the drilling rig.

The regulator, the Canada-Nova Scotia Offshore Petroleum Board (CNSOPB) that approved the drilling April 21, said it was the result of a loose connection in the line that pumps mud into the conduit between the oil well and the rig to bring up broken bits of solid material.

The accident forced BP to suspend drilling operations for weeks, until CNSOPB gave them the green light again on July 23.

It was less than four months after Environment and Climate Change Minister Catherine McKenna approved new drilling project in February, based on a February 2018 decision by the Canadian Environmental Assessment Agency that the “project is not likely to cause significant adverse environmental effects.”

Rick Wilcosh, a Lunenburg resident who displays a handmade “not worth the risk” sign on his front yard, said the toxic spill was top of mind for him.

“If they have something like they had in the Gulf of Mexico, it would be close to catastrophic,” said Wilcosh, a retired high school English teacher.

“I know that we should be shifting away from fossil fuels to other renewable resources.”

BP says the Deepwater Horizon disaster taught it “important safety lessons” and that in the years since, it has “transformed itself” through new technology and training, like response plans and other preparation to minimize damage from an oil spill.

When it approved restarting of drilling, the CNSOPB said it had verified that BP has implemented a number of actions to prevent such a toxic spill from happening again.

These include replacing the section where the leak occurred, inspecting similar connections, installing a new alarm on the line, and putting in place routine inspections and tests.

BP also says it has established a 500-metre radius "safety exclusion zone" that prohibits vessels not related to the drilling project, monitored by a "standby vessel."

‘We think there’s a future for oil and gas offshore’

At the G7 meeting of environment ministers in Halifax last month, National Observer asked Natural Resources Minister Amarjeet Sohi about the concerns of residents about an offshore oil spill.

“We take the safety and security of oceans very seriously,” Sohi replied.

“I can’t comment on this particular case, but what I can tell you is that the petroleum board...has the resources and the know-how, and its purpose is to make sure that drilling is safe, that whatever activity follows the highest standards that Canadians expect.”

At the meeting, Sohi said the government had a “collective responsibility and a unique opportunity to build an inclusive future for our citizens.”

He reminded the group of officials from the Group of Seven advanced industrialized nations that Canada had signed the Paris climate agreement and “helped shape it” as well as drafted the federal carbon pricing plan with provincial and territorial governments.

In the Halifax area, a federal lab called the Centre for Offshore Oil, Gas and Energy Research tries to understand how oil spills behave, in order to provide a base of information in the event of an emergency.

But Sohi also discussed the “important contributions” of the offshore oil and gas industry. And inside the G7, the discussion Sept. 21 was less about risks and more about opportunities.

Paul Simons, the deputy executive director of the International Energy Agency, told his colleagues that over a quarter of crude oil still comes from offshore drilling.

Despite the explosion of fracking technology making fossil fuels cheaper and more available in North America, he said, “we think there’s a future for oil and gas offshore.”

Offshore drilling has to become “leaner and fitter” to compete with fracking, he said — “they've got to be more competitive, but that competitiveness is there.”

He also talked about the “synergy that we’re seeing between oil and gas expertise” and “how that can feed into the growth of renewable energy.” By this he meant the possibility of “repurposing” existing oil and gas facilities or diverting supply chains.

“Collaboration between the oil and gas sector and the renewables sector is very important,” said Simon.

‘I think we can do better’

The potential of oil and gas prosperity isn’t particularly reassuring to Anna Shoub, who creates women's hats at her Lunenburg studio.

“I think we can do better — we don’t need to keep thinking about doing things in the same old way. We know that it’s only a matter of time before there’s a spill.”

Both Margaret Long and Wilcosh noted Lunenburg was dealing with its own local issue of pollution.

“We already have an issue here with a smelly harbour,” said Wilcosh. “If you add oil to that smelly harbour, who’s going to want to come here? Tourism is a huge part of the local economy.”

Back at the Long household, Margaret said she couldn’t imagine a pollution issue on a much wider scale. “Our little piece of water here is minute compared to the oceans that we could essentially destroy,” she said.

For Bill, it’s a matter of taking the threat of climate change seriously.

"You'll never catch up to the problems of climate change, if we're just diddling around the edges, and waiting for things to change. We're never going to solve the problem,” he said.

"I'm not sure that that's the magic bullet, Bill,” replied Ted.

“It's an emotional subject, but when you cut away from all that, how are we going to do this?"

An answer to that last

An answer to that last question about how: the same way you eat an elephant - ONE BITE AT A TIME!!! The only difference is that now that more of us know the extreme urgency, we ALL have to take BIGGER BITES!!!

Trudeau is not listening. He

Trudeau is not listening. He's an oil and gas man now.