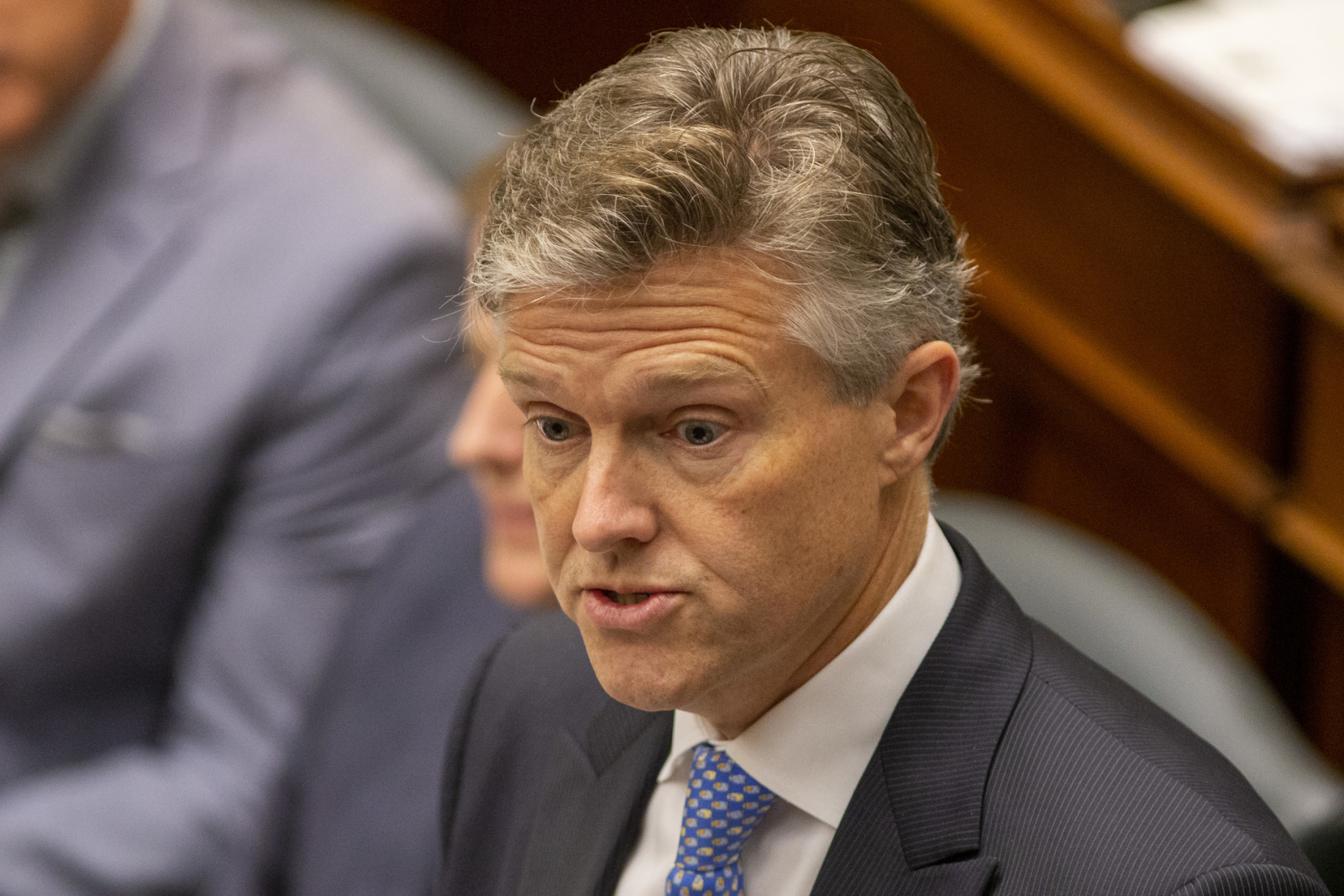 Ontario Environment Minister Rod Phillips told reporters "it was a great day for Ontario" after the passage of the Cap and Trade Cancellation Act. Photo by Carlos Osorio
Previous story
Next story

The Ontario government fulfilled a central campaign promise Wednesday as it passed legislation to repeal the province’s price on carbon pollution. But in doing so, ministers were still unable to articulate a science-based explanation for their decision.

"It was a great day for Ontarians," said Environment Minister Rod Phillips as he celebrated the passage of his first bill as cabinet minister. He said the move will save Ontarians $264 each year, money they would have had to pay under the former cap and trade system. Ontario’s fiscal watchdog, however, recently said the cancellation of cap and trade will worsen the province's deficit by $3 billion.

Phillips stood by the cancellation, celebrating it with stakeholders who testified in front of a legislative committee to urge the government to repeal the price on carbon to ensure their businesses remained competitive.

“It was costly, it was ineffective, it was killing jobs," Phillips said of the program. "It’s gone, today.”

His comment is inaccurate. Ontario's environmental commissioner — along with a Nobel prize-winning economist and much scientific research — touts the cap and trade program as the most cost-effective and efficient way to reduce the heat-trapping greenhouse gas emissions that contribute to climate change. British Columbia, California and several European nations who have carbon pricing programs have reduced their emissions while maintaining strong economies.

"The government is using a lot of inaccurate rhetoric that is misleading the public," Mike Schreiner, Ontario Green Party leader and MPP, told reporters after the bill's passage.

When asked by reporters why he was disagreeing with widely-cited research on pollution policy, Phillips appeared to contradict his earlier remarks by stating Ontario's cap and trade system "was not in place long enough to make a difference."

Ontario's cap and trade system was brought in by the previous Liberal government. It took effect Jan. 1, 2017, but gave away free passes as part of a compliance period for over 260 programs that had registered until the end of 2020.

"Ford had other options, but he evidently wanted to use carbon pricing as a political wedge to help the federal Conservatives in the 2019 election," he added. "It is probably the most expensive partisan political stunt in history."

The Ford government has said its plan to tackle climate change in Ontario will be unveiled next month. Here's what you need to know while you wait:

How does the cap and trade system work?

Ontario’s carbon pricing system put a limit, or cap, on the greenhouse gas emissions that large industrial polluters could emit every year. If companies exceeded those limits they had to buy allowances at auctions or from other companies that were under their limits.

James Snetsinger, a Grade 4 teacher at Thorncliffe Park Public School, brought his entire class to protest the bill when it was being discussed at committee on Oct. 17. Each of them came with a hand-drawn poster that asked the environment minister to reconsider. "In 2030, I will be 21," each poster said, before recommending climate policies.

Snetsinger said the cap and trade system "is not well understood by most adults." He explained it to his kids with an analogy: "It's like if you establish a limit on the number of times someone should pass gas into their house," Snetsinger said. "And every time they exceed that, they have to pay for those who pass the least amount of gas. Eventually, they all have to learn to have a better diet."

How did Ontario get here?

Ford vowed to eliminate the cap and trade system and fight any federal carbon pricing plan during the spring election campaign. It was the first promise he made when he was sworn in as premier.

Since then, his government has cancelled most programs financed through cap and trade revenues, which included rebates for energy-efficient renovations, transit projects, electric vehicles and a school repair fund.

The bill was introduced in July but the final vote was delayed when Greenpeace launched legal action against the government, alleging the province had failed in its duty to hold public consultations on the issue, as demanded by the Ontario’s Environmental Bill of Rights.

The government immediately launched public consultations on the bill, which ended this month. The results of that consultation have not yet been made public.

In August, the Ford government also launched legal action against an incoming federal carbon tax, calling it "unconstitutional." Lawyers for Canada's attorney general have responded that climate change is a national issue and the federal government has jurisdiction under the “peace, order and good government” clause of the Constitution. The passed legislation in Ontario protects the province from any potential litigation over the decision to cancel the cap and trade program.

How much will this cost Ontario?

In its report, Ontario's fiscal watchdog, the Financial Accountability Office, said just over a billion dollars in cap and trade revenue has yet to be spent, though it expects the money will be used up by the costs of winding down the program and funding green initiatives not cancelled by the province — the list of which has not been made available.

In the past, members of Ontario's Progressive Conservative government have called the cap and trade revenues a "slush fund," but Phillips assured reporters Wednesday the revenues would be used for the purpose they were assigned: to reduce greenhouse gas emissions by investing in green energy projects.

He noted that the program was "not particularly well constructed," and a lot still needs to be calculated as the program winds down.

The legislation that has cancelled the program makes clear the criteria for companies seeking reimbursements, noting that only those that purchased more than they used while the program was active, and were not able to recover those costs from consumers, will be eligible for compensation. The government maintains it will spend up to $5 million in payouts to those companies.

There may be environmental costs too: the federal government has said the cancellation of Ontario's cap and trade program may result in a projected annual increase of emissions of approximately 48 million tonnes of carbon pollution in 2030, equivalent to the emissions from about 30 coal-fired electricity units.

What could a new 'made-in-Ontario' climate plan look like?

Public consultations for a new climate plan are still ongoing and end on Nov. 16.

Schreiner said that "the only tool left in (the government's) toolbox was regulation," which will cost more than the cap and trade program. "It’ll cost the economy more because it's going to increase costs of production for businesses and they’re going to pass it onto consumers."

Any new plan will "probably end up costing people more or the government is just not going to meet its climate targets," he added. "That’s the choice they have."

This fall, our government will bring forward a Made-in-Ontario plan to address climate change and other environmental challenges. I invite you to be a part of it. Share your ideas us here: https://t.co/EQOPRMo7f9 #onpoli

This week, Phillips mentioned three climate policies that have caught his attention, including:

'This is a to-be-continued conversation'

Phillips said he will be meeting federal Environment and Climate Change Minister Catherine McKenna in Ottawa on Nov. 24 to discuss the federal carbon pricing system that is set to kick in next spring.

"We haven’t heard anything from Ottawa in so long that I think it's good to go to Ottawa to make sure it’s still there," he told reporters.

Petro-states don't need an environment or good health or justice. They don't need journalists or teachers or scientists. They don't need people. They just need politicians who have no conscience to hand over the demands of the oil industry.