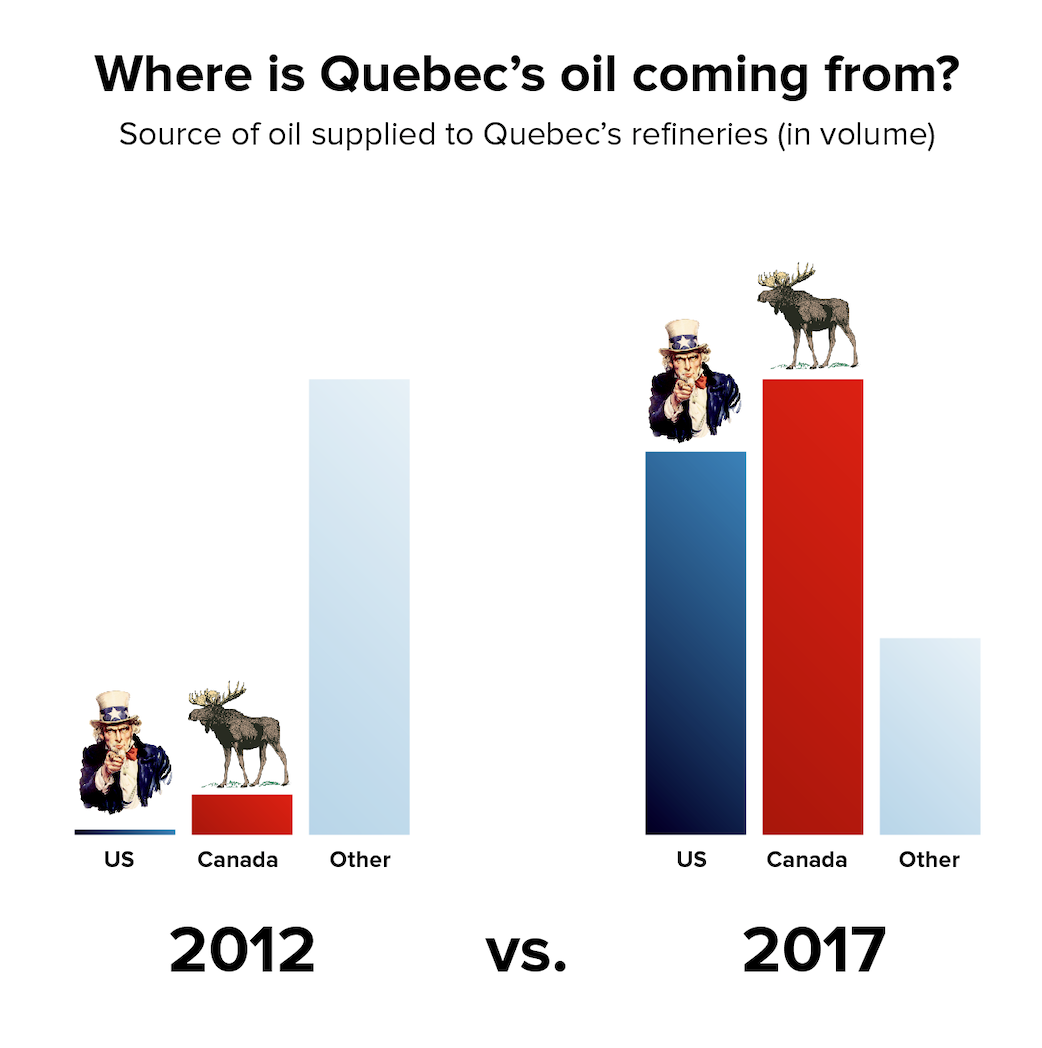 Quebec oil by source. Analysis by National Bank of Canada based on data from Statistics Canada. Chart by Codename for National Observer
Previous story
Next story

We’ve heard it time and again.

The argument that Quebec has no business touting itself as a climate leader when it’s dependent on Saudi oil.

It’s a regular drumbeat from pundits and politicians opposed to climate action who promote more pipelines and more oil production.

But the argument simply isn’t true, according to the latest numbers. In fact, the largest source of Quebec oil is... Canada, and the second largest source is the United States.

In September, Conservative Party Leader Andrew Scheer told Parliament that the Liberal government "made Canada more dependent on foreign energy by killing Energy East, so we have to continue importing oil from places like Saudi Arabia and Venezuela."

In the Toronto Sun, Lorne Gunter railed against the federal climate plan asserting that the feds are “at war with Alberta” while “most Saudi oil is destined for Quebec?”

The next month, the Montreal Gazette ran an opinion piece authored by Kenneth Green, an analyst from the conservative Fraser Institute, that hammers a similiar point in calling for the Energy East pipeline to be resurrected.

Inconvenient facts for Canada's “Saudi oil” brigade: the largest source of Quebec oil is... Canada, the second largest is the United States.

“Saudi Arabia is some 9,625 kilometres from Quebec, where Saudi oil is imported to Canada,” Green wrote. “Wouldn’t it be nice if Eastern Canada got its oil from a democratic country with an excellent record on civil rights and environmental protection, like, say, Canada?”

These examples from three major Postmedia newspapers (the alt-right is much more belligerent on the topic) represent the drumbeat of “Saudi oil” messages used to undermine action to tackle our addiction to fossil fuels because of their impact on the climate and human health. The “Saudi oil” argument is also prominent in efforts to block the switch to renewables. There’s a small but well-connected group of people who repeatedly raise the spectre of foreign conspiracies whenever the conversation turns to switching to low carbon energy.

All of these arguments — whether from politicians or Postmedia-owned newspapers or elsewhere — were terribly misleading.

As National Observer’s Carl Meyer reported this week, Quebec refineries do not rely on Saudi Arabia for their supply. Quebec is getting more than 80 per cent of its oil from North America, with the next largest source of crude being Algeria at 11 per cent.

Quebec’s supply of crude oil from Western Canada ballooned from less than one per cent in 2012 to 44 per cent in 2017. All the hand-wringing about pipeline paralysis now looks overwrought.

Clearly there is a serious problem with the level of debate about Canada’s energy sector. And it wouldn't be a surprise if the public gets confused by all the hot air.

We have groups seeking to sow doubt by undermining scientific evidence, hard statistics and facts.

We know that the oil industry is playing a significant role in muddying the waters through advertising and misleading statements.

In this context, it’s more important than ever to have trusted sources of information to set the record straight.

This is why it’s important to press outlets like National Observer to do more of this coverage, to share our articles, and to subscribe and fund more reporting like Carl’s in-depth look at the reality of the situation.

Big Oil is aggressively fighting government efforts to crack down on pollution and improve oversight of industry.

They poured millions of dollars into attack ads to defeat proposals in states such as Arizona, Colorado and Washington that would have cracked down on carbon pollution, boosted renewables or tightened regulations on the oil industry.

And, as National Observer's Fatima Syed reported in July, these companies and their allies are using the same playbook right here in Canada.

Big Oil has a lot to gain by casting doubt on facts and preventing progress in a world that is moving beyond fossil fuels.

Taxpayers also may have a lot to lose if they have to cover even a portion of the massive financial liabilities that could add up to $260 billion in Alberta alone, based on documents unearthed this month by National Observer's Mike De Souza.

As newly-elected U.S. Congresswoman Alexandria Ocasio-Cortez said this week: “... we need a Green New Deal and we need to get to 100 per cent renewables because our lives depend on it… I’m thinking (about) the America that we’re going to live in for the next 30 years. And I don’t want to see Miami underwater, and I don’t want to see my own district underwater.”

There are progressive-minded people around the world that get this message, including here in Canada. People who understand the stakes and get the urgency. The denial brigade was surely outraged to see tens of thousands of Quebecers take to the streets this past weekend demanding accelerated action against climate change.

More than 180,000 people have already signed a new "Pact" that was launched in Quebec, calling for immediate individual and collective action to transition away from fossil fuels.

Let’s not allow their voices to be drowned out by propaganda and false information.

Oil industry propaganda amounts to false advertising. There are laws against this in Canada; why are they not enforced?

The problem these fossil fool

The problem these fossil fool 'pundits' have is that they don't read widely enough....or keep up with developments in their own country, let alone the world. For them, everything but oil, stands still.......so they can the better 'describe it' for the people.

But of course the Fossil Fuel Industry knows the real stats. So they produce advertising, not news. Propaganda, not data. It's the stuff that should keep comedians in business, not governments.

The saddest reality perhaps being, that it's oily liars like Trump who has to tell us the obvious.....that much of the news being fed to MSM is fake. If not fake, it's whitewashed, with the biggest nuggets of truth, filtered out before it goes to press.