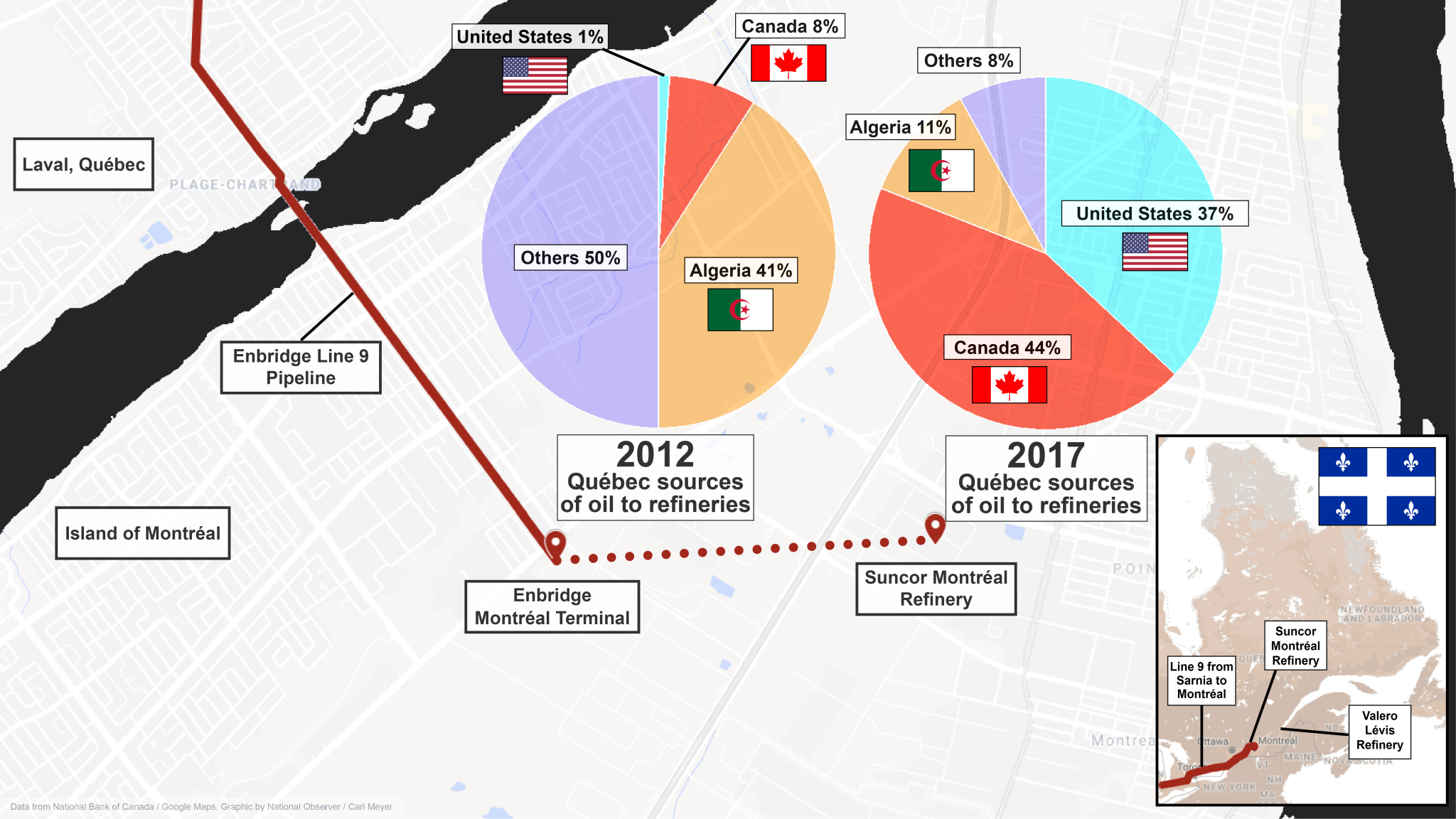 This graphic shows how the supply of oil to Quebec's refineries changed between 2012 and 2017, following the reversal in flow of the Line 9 pipeline. The eastern end of Line 9 is also shown in Montreal. Graphic by National Observer/Carl Meyer
Previous story
Next story

The supply of oil going to Quebec refineries has undergone a dramatic transformation in less than six years.

While the province got most of its oil from overseas in 2012, the situation had flipped by 2017, with most of the supply now coming from North American producers. On top of that, Western Canada is now the Central Canadian province's top source of crude.

The shift away from overseas imports is partly due to a 2015 reversal in the direction oil is delivered through Enbridge’s Line 9 pipeline, according to a new analysis by the National Bank of Canada. The analysis, first reported by Radio-Canada, also attributed the shift to increased production of U.S. shale oil.

The new numbers provide a reality check for some industry advocates who have incorrectly argued that Quebec is importing crude from Saudi Arabia instead of supporting and buying oil from the Canadian industry.

The Line 9 pipeline has become a critical link for oilsands giant Suncor, which owns the Montreal Refinery near the pipeline's eastern terminal on the Island of Montreal. Line 9 connects with the Enbridge Mainline system that brings crude oil east from Alberta, Saskatchewan, Manitoba and North Dakota to Sarnia in southern Ontario.

From Sarnia, Line 9 now brings that oil east to Montreal, where it can be accessed by Suncor's refinery, which is processing on average 24,300 barrels per day of diluted bitumen, also known as dilbit, an oilsands product.

“Enbridge's Line 9 reversal provides Suncor the flexibility to supply the Montreal refinery with a full slate of inland-priced crude, enhancing the long-term competitiveness of the refinery,” said Nicole Fisher, the company's senior advisor for media relations and issues management, in emailed answers to National Observer questions.

'Much larger than it was five years ago'

National Bank used data from Statistics Canada as well as the Institut de la statistique du Québec to show that Quebec’s supply of crude oil from Western Canada ballooned from less than one per cent in 2012 to 44 per cent in 2017. Some of this Western Canadian crude, according to Suncor, comes from the oilsands in Alberta.

“We know for sure that the amount coming from Canada is much larger than it was five years ago," National Bank senior economist Marc Pinsonneault said in an interview with @NatObserver reporter @ottawacarl #cdnpoli #abpoli #oilsands #EnergyEast

“We know for sure that the amount coming from Canada is much larger than it was five years ago," National Bank senior economist Marc Pinsonneault said in an interview with National Observer. "We think it’s a very reasonable estimate of what is going on.”

Five years ago, 92 per cent of oil supplied to Quebec’s refineries was imported, mostly from Kazakhstan, Angola and Algeria, according to the analysis by Pinsonneault and chief economist and strategist Stéfane Marion. Last year, they said, 82 per cent was sourced from North America.

The Line 9 reversal is actually a re-reversal. It originally flowed in the same direction it is now, east, between 1976 and 1997. It was then reversed to flow west, after market dynamics made it more profitable to bring in imported crude. Enbridge applied in 2012 to reverse it back east again, to meet demand from shippers that wanted to deliver crude oil to Quebec.

But with the support of Montreal's former mayor, Denis Coderre, who pushed for more stringent oversight, the National Energy Board (NEB) — the federal pipeline regulator — eventually gave this re-reversal the green light to proceed in 2015, after Enbridge concluded testing and other conditions imposed by the NEB in March 2014.

Bitumen, a tar-like heavy substance produced in the oilsands, needs extra processing before it can be refined into consumer products like gasoline. To put bitumen into a pipeline for transportation, it’s often diluted with another product, like a natural gas condensate.

For years, Suncor has floated the idea of installing a coker unit at its Montreal refinery, which would allow it to greatly expand its ability to process bitumen, as it could turn the residue from the refining process into higher-value products.

The company is still considering the move, said Suncor CEO Steven Williams during the company's third-quarter earnings call on Nov. 1. "As we see the environment going forward, the Montreal coker is looking very attractive again," he said.

A coker isn't needed to process diluted bitumen, said Andrew Leach, associate professor of natural resources, energy and environment at the University of Alberta. If the refinery was blending dilbit with other crudes it would result in something similar to a standard light or medium crude, he told National Observer.

In addition to Line 9, the refinery is supplied by tankers and railways, and from the Portland-Montreal Pipeline, which can bring oil from a port on the U.S. Atlantic coast. Suncor owns 23 per cent of that pipeline.

The Montreal refinery produces everything from gasoline to heavy fuel oil, solvents, petrochemicals and other petroleum products. These are distributed primarily across Quebec and Ontario via the Trans-Northern Pipeline, which runs from Montreal to Lake Erie and has connections to Ottawa and Toronto. Finished products are also shipped by truck, by rail and over water.

Suncor also owns 33 per cent of the Trans-Northern Pipeline, which National Observer reported has been plagued with safety problems and leaks. The NEB found that the pipeline was a threat to public safety and issued a safety order in 2016 that reduced the line's pressure but kept it in service, and imposed a set of conditions on the operator, Trans-Northern Pipeline Inc.

The findings cast doubt on whether Quebec would benefit from another pipeline such as Energy East. In Ottawa, federal Conservatives have been talking about reviving the terminated TransCanada project in recent weeks to counter Canada's dependence on foreign oil imports.

TransCanada's $15-billion Energy East proposal would have brought up to 1.1 million barrels of oil per day from the West across a 4,500-kilometre route to New Brunswick.

In September, Conservative Party Leader Andrew Scheer told the House of Commons that Prime Minister Justin Trudeau "made Canada more dependent on foreign energy by killing Energy East, so we have to continue importing oil from places like Saudi Arabia and Venezuela."

The TransCanada project, backed by the oil and financial sectors but opposed by Indigenous leaders, environmentalists and mayors along the proposed route, was derailed in 2016 after National Observer published revelations that an independent federal panel reviewing the project had met privately with former Quebec premier Jean Charest, a company consultant.

It was also not clear whether TransCanada would have been able to get enough shippers to make the Energy East project economically viable. The Calgary company's proposed Keystone XL project is relying on some taxpayer support after Alberta Premier Rachel Notley's government signed a 20-year deal to ship 50,000 barrels of oil per day on the line.

In an unrelated development last week, a U.S. federal judge has blocked the $10-billion Keystone XL pipeline project to allow more time to study its environmental impact. U.S. President Donald Trump called the ruling a “political decision” and a “disgrace" in comments to reporters on the White House lawn.

National Observer sent a request for comment on Nov. 6 to Scheer's office about the necessity of Energy East, given National Bank's report, and then followed up on Nov. 9. Virginie Bonneau, a press secretary for Scheer, acknowledged the request by phone on Nov. 9. Scheer's office had not given a response by publication Nov. 13.

Ontario gets all its foreign oil from the United States

Scheer's complaint about eliminating a dependence on Saudi Arabia specifically could be connected with New Brunswick, which got 38 per cent of its imported crude oil in 2017 from the Middle Eastern state, according to the NEB.

But New Brunswick has a 16 per cent share of Canada's refining capacity for petroleum products, compared to Alberta, Ontario and Quebec which represent the majority of Canada's capacity, at a combined 65 per cent.

“In the past, Atlantic Canada and Quebec were not well connected to domestic crude oil production," the NEB wrote in a 2018 report about domestic and imported oil flows. "Until recently, all of these Canadian refineries imported crude oil to meet their needs. With the reversal of Line 9 and more rail capacity, Quebec refineries now process some western Canadian crude oil."

The organization said between 1982 and 2004, Canadian refinery purchases of imported crude grew while domestic crude declined, but the trend began reversing in 2005. "The closure of refineries in central and Atlantic Canada that imported crude oil, the economic use of rail to transport discounted domestic crude oil and the re-reversal of Line 9 also contributed to this trend," it wrote.

So Scheer wants to build more

So Scheer wants to build more pipelines to stop the import of a product that increasingly is not being imported? Sounds like good Conservative policy, and given the complacency of the MSM, should work out well for him.