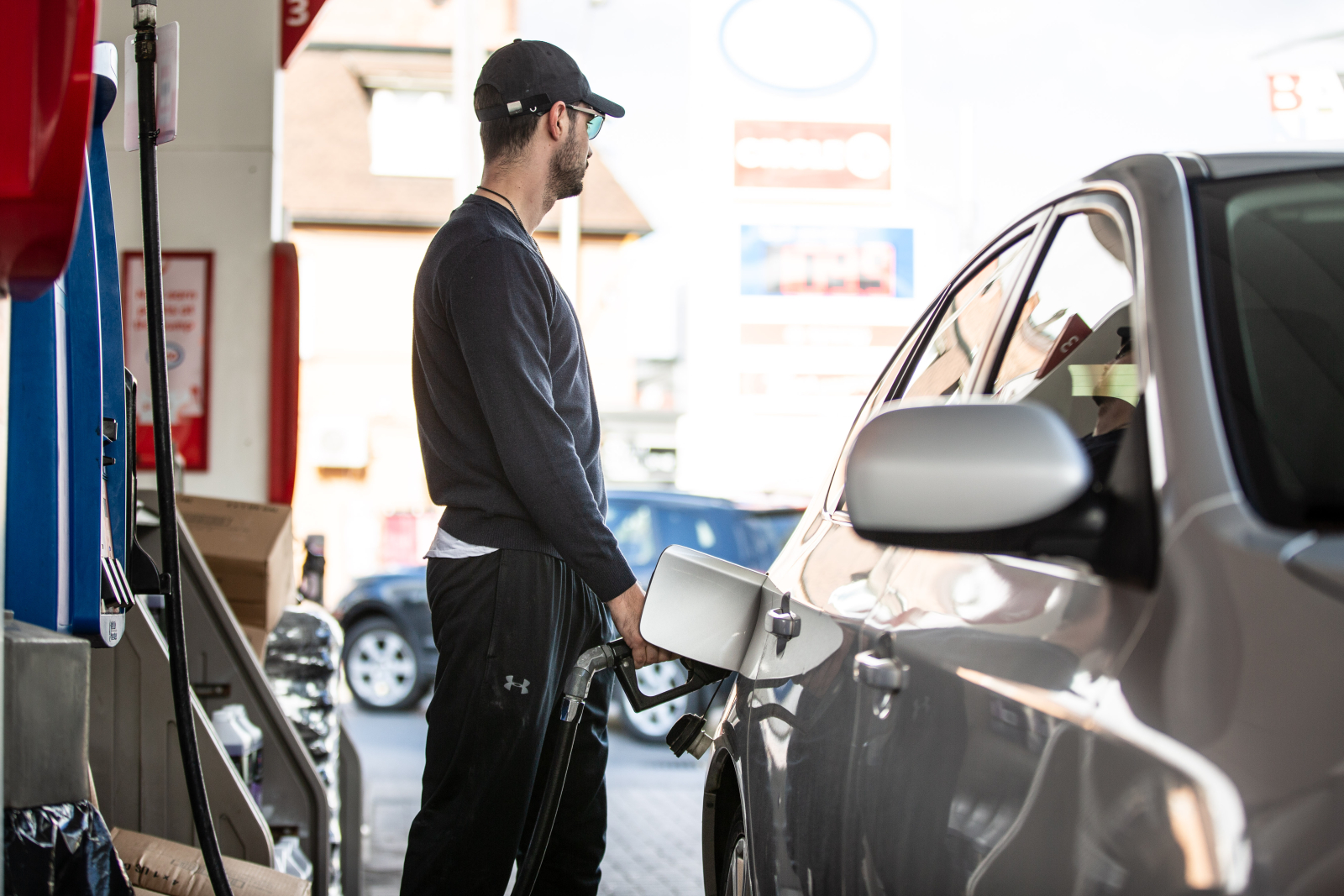 A man pumps gas at a station in downtown Ottawa on Nov. 8, 2018. File Photo by Alex Tétreault
Previous story
Next story

Three Canadian oilpatch giants say they had nothing to do with a campaign to weaken car emissions rules backed by a U.S. trade group to which they belong.

In comments to National Observer, officials from Suncor, Husky and Cenovus distanced themselves from recent findings by investigations at the New York Times and ProPublica that revealed how a U.S. association representing oil refiners, the American Fuel and Petrochemical Manufacturers (AFPM), was behind an effort last year to weaken vehicle standards.

A Suncor executive also sits on the board of directors of AFPM — an organization which says it’s on the lookout for environmental “overregulation” and which was involved in a 2016 battle against a crackdown on U.S. power plant pollution. Canadian oil and gas producer Irving Oil is also a member, as are other multinational companies with Canadian interests, including Exxon and Chevron.

Andrew Gage, staff lawyer at Vancouver-based West Coast Environmental Law, argued that their membership in the group showed how Canadian industry was complicit in actions that delay tackling climate change.

"These types of industry-led attacks on climate policy emphasize how far the oil and gas industry will go to keep making profits, while the rest of us pay the price of climate change,” said Gage. “That's true not only for the U.S. fossil fuel industry, but industry players in Canada and around the world."

His organization has been spearheading a letter-writing effort by some Canadian cities like Whistler, B.C. to ask the oilpatch to pay its “fair share" of the costs of climate change.

The effort has provoked industry criticism; Cenovus, for example, pulled out of an investment conference in the ski resort town, saying it needed to "take a stand against these non-stop unfounded attacks on our industry that fail to acknowledge the huge focus the oil and gas industry places on reducing emissions."

The Canadian companies say they were not involved in AFPM's covert campaign. "Suncor is a general member; however, we were not actively involved in the campaign mentioned,” said Nicole Fisher, senior advisor for media relations and issues management at Suncor, in a comment similar to the other two firms. Irving did not respond to requests for comment over the past four weeks.

Companies become members of trade groups or sit on their boards for a number of reasons, from networking to support for policies. At AFPM, firms pay membership fees which gets their logo up at conferences, and unlocks access to insider meet and greets, and other benefits like sponsorship opportunities and technical expertise.

A fifth Canadian firm with a connection to the organization, Toronto-area wax manufacturer The International Group (IGI) which has a representative on AFPM’s board, said it was unaware of the campaign. IGI president John Reucassel said he had never heard of it until National Observer brought it to his attention, and the firm had no interest in vehicle efficiency lobbying.

'Safer, cheaper cars that WE get to choose'

Roughly a quarter of global oil demand is due to the constant thirst of cars and trucks for gasoline and diesel. If engines are designed better, vehicles can go farther on less fuel, and drivers have to buy less gas. In this way, vehicle efficiency standards can have a direct impact on reducing oil consumption by hundreds of thousands of barrels per day.

Lowering transport sector emissions is also key to a transition to a low-carbon future that aligns with Canada's Paris agreement commitment to limit damage to the planet's ecosystems caused by global warming.

In 2012, the Obama administration came up with a plan to boost the fuel efficiency of cars and light-duty trucks so that by 2025, they would average over 50 miles per gallon (5.6 litres per 100 kilometres), a significant milestone in engine technology. This would cut oil consumption by 12 billion barrels and save consumers over US$1.7 trillion at the pumps, the administration estimated at the time.

The Trump White House had other ideas: last year, the administration produced a plan to instead freeze standards through 2026. The White House has justified this in order to protect American jobs in vehicle sales, but the Natural Resources Defense Council called it “a giant giveaway to the oil industry at the expense of public health.”

Soon after after the administration made its fuel economy plan public in August 2018, a campaign secretly backed by AFPM was rolled out to rally support for this freeze.

The U.S. campaign included Facebook ads featuring U.S. President Donald Trump and the message in all capital letters, “support our president’s car freedom agenda!" Another ad by the same organization shows former U.S. President Barack Obama with the caption, "would YOU buy a used car from this man?”

The "car freedom" ad asks readers to "file an official comment to support our president's plan for safer, cheaper cars that WE get to choose." U.S. law takes public commentary like this into account when finalizing rules. The New York Times reported that over 3,300 public comments to the U.S. Department of Transportation could be traced to the petition.

The ads identified themselves as coming from an organization called Energy4US. ProPublica reported on Nov. 1, 2018 that there was no such company or organization, and that the group "appears to be a front" for AFPM. It noted the Energy4US website was registered to AFPM, and it is first on its list of “coalition members."

On Dec. 13, the New York Times reported similar findings, and quoted a senior vice president at AFPM, Derrick Morgan, who said the group will “lead and join groups like Energy4US" as it “regularly works with policymakers, coalition groups and individuals to promote shared goals."

After that story ran, AFPM published a "response" on its website saying the New York Times attempted to "vilify" the group. "Educating on critical issues and advocating for policy outcomes is the whole reason AFPM, countless trade associations and the Washington offices of organizations of differing stripes exist," it stated.

"Our job is to make sure the critical work and contributions of our members are considered in policy debates and that the consumers who depend on our products have a voice in the political process."

AFPM has different membership types based on what kind of operations companies are running. Suncor and Husky are listed as “regular” members, meaning firms that are running refineries or petrochemical plants that operate like U.S. refineries. Both companies own refineries in the U.S. and Canada.

Cenovus is listed as an "associate” member, meaning companies that have “special interests” in refining or petrochemicals but don’t own facilities themselves. Cenovus holds a 50 per cent ownership in two U.S. refineries.

Marc Mageau, listed on Suncor’s website as the firm’s senior vice president of refining and logistics, is also listed as an AFPM board member, as is Ross Reucassel, who is president emeritus of IGI.

National Observer asked the three oilpatch companies, as well as Irving and IGI, to disclose what financial or other support they were providing AFPM, whether they were involved, consulted or knew about the campaign to roll back emissions standards, and whether they endorsed the campaign.

"Aside from being a member of AFPM, we've had no involvement,” said Husky media and issues manager Mel Duvall. "We are not involved in setting AFPM policy and have no comment on the Facebook campaign you mentioned," said Cenovus senior media advisor Sonja Franklin.

Reucassel of IGI said his father Ross Reucassel has been a board member of AFPM because of its subcommittee on waxes. AFPM maintains a long list of committees ranging from the environment to fuels, government relations, labour and cybersecurity.

“We have no skin in the game on the (emissions) standard,” said Reucassel in a phone interview. “To be honest, this is a political football in the U.S., and if we got in the middle of that, we’d just be collateral damage.”

He said he wasn’t aware of what U.S. vehicle standards were, or where they were headed. While petroleum-based wax has been a big portion of the family business, he added, the firm also offers beeswax-based and soy-based products, among others.

In the U.S., the battle over vehicle efficiency is far from over. The Trump administration may be reconsidering an outright freeze, according to comments from U.S. Sen. Tom Carper at a Jan. 16 confirmation hearing for the next EPA head, former coal industry lobbyist Andrew Wheeler.

Carper said he had "learned" that the White House “now plans to finalize a 0.5 per cent annual increase in the stringency of the standards.” A final decision is not due until March 30. Meanwhile, California and about 20 other states have threatened to sue if the freeze goes forward.

“The American people want higher fuel economy standards, they want higher standards for reducing pollutants going into the lungs of the people in our country,” Sen. Ed Markey told Wheeler at the hearing.

“The impact on ordinary families, their health, the health of our country, the security of our country is absolutely urgent,” said Markey.

Well, there we go. Don't

Well, there we go. Don't know for sure something's true until it's been officially denied.