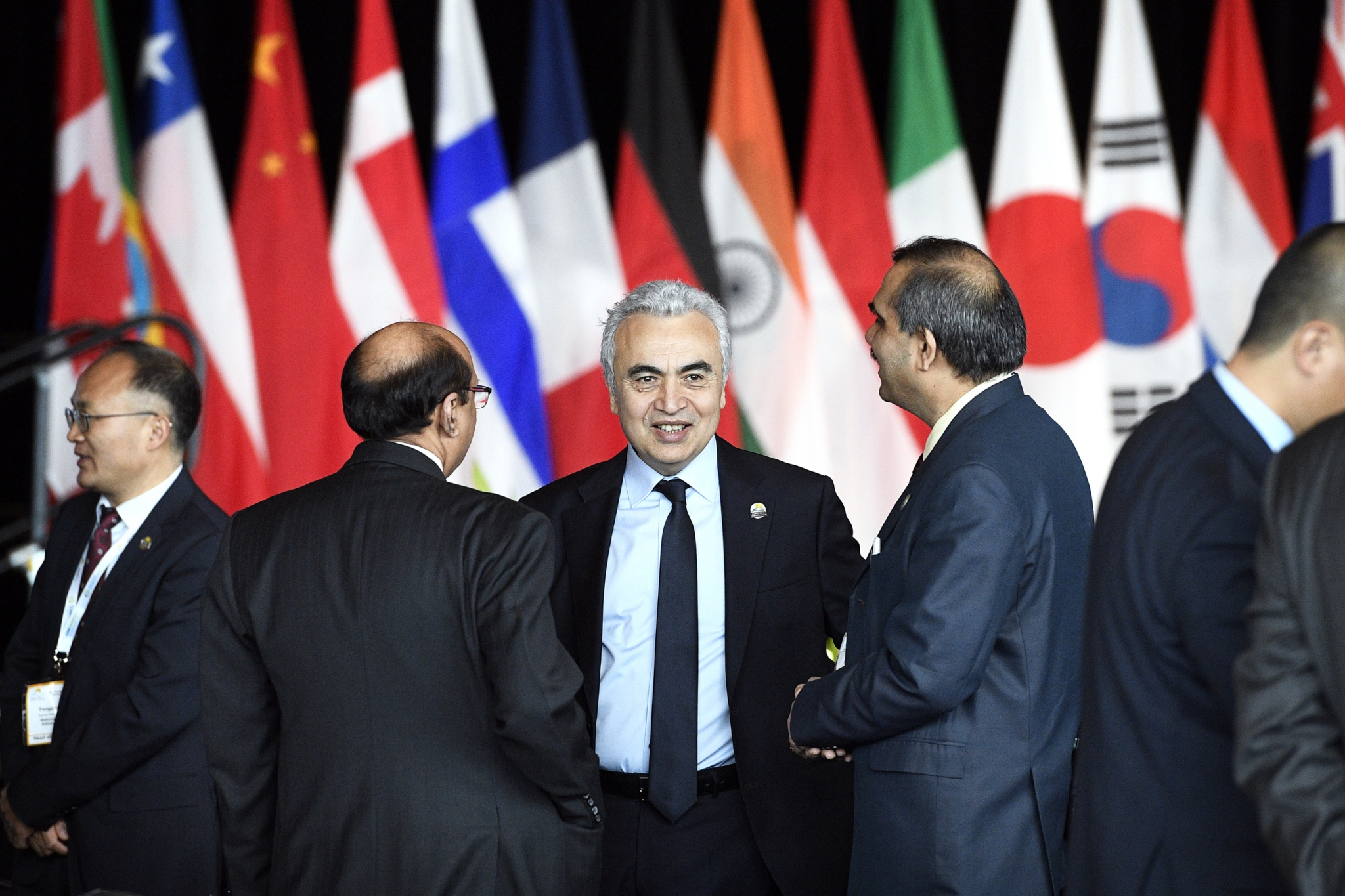 IEA executive director Fatih Birol speaks with attendees at the Clean Energy Ministerial in Vancouver on May 29, 2019 before he gave opening remarks to the gathering of 25 countries. Photo by Jennifer Gauthier
Previous story
Next story

Canadians could save as much as $24 billion annually by 2050 by scaling back the use of fossil fuels to heat and cool their buildings and deploying a range of low-carbon and energy efficient technologies, according to a new joint study by a federal regulator and an international agency.

These tens of billions of dollars a year in savings would come on top of cutting energy demand by as much as 35 per cent and could be achieved through the use of existing technology, say the National Energy Board (NEB) and the International Energy Agency (IEA) in their new research.

But in order to deliver on "the energy savings potential and related emissions reduction," Canada will need "additional policy signals" like carbon pricing and tightened energy performance requirements for buildings, they say.

That's in part because abundant and cheaply priced natural gas in Canada poses a “particular challenge” to cutting carbon pollution and reducing energy demand in homes and offices.

"Policy support is needed to encourage shifts to efficient heat pumps in regions where natural gas and electricity prices mean there may be little economic incentive to change equipment,” the report states.

The joint report was published the same day the IEA’s executive director delivered a sobering message in Vancouver about the state of the world's clean energy transition, in remarks to a gathering of ministers from 25 countries.

Since Monday, the Clean Energy Ministerial has convened experts, industry and government officials in one of the city's downtown convention centres about how nations can accelerate their adoption of things like smarter energy grids, cleaner power and more efficient energy use.

But two out of three buildings that are built in the world today are not built to any energy efficiency standards, Fatih Birol told the international group of ministers, including Canadian Natural Resources Minister Amarjeet Sohi, during the meeting's third day on Wednesday.

“We are still seeing efficiency standards for many buildings either weak or nonexistent," he said.

He said world energy efficiency improvements are slowing, while renewable capacity growth stalled in 2018. Most clean energy investments, about 70 per cent, still come directly or indirectly from governments instead of the private market.

“There is a growing disconnect between climate ambitions and real-world energy needs," said Birol, echoing a speech he gave in Ottawa in February. “Our mission is not to boost our egos, our mission is to reduce CO2 emissions."

Sohi also gave a short speech before Birol, noting global carbon pollution continues to rise and “the time has come for greater ambition." Carbon emissions hit a record high in 2018 despite efforts in many countries, including Canada to cut pollution.

Sohi said he would have conversations at the closed-door session on “how we can effect change without leaving anyone behind.”

Media were permitted to hear opening statements from Birol and Sohi before being ushered out of the room so a closed-door session between the ministers could take place.

About a quarter of Canada’s energy consumption comes from buildings like homes and offices where Canadians live and work. The majority, or 65 per cent of this energy demand is due to heating and cooling. Many boilers in Canada, for example, are gas-powered.

While energy efficiency measures in Canadian buildings, like better condensing furnaces, have improved in the last several years, Canada is also building more: the nation’s floor space has expanded faster than its population over the last decade.

The Trudeau government has made energy efficiency in buildings one of the key elements in its Pan-Canadian Framework on Clean Growth and Climate Change, committing to "increasingly stringent model building codes" starting in 2020 and “net-zero energy ready” codes by 2030.

It has also rolled out a nationwide carbon pricing system that includes a fuels charge on marketable natural gas as well as a range of other fossil fuels, including gasoline, propane and fuel oil in Ontario, New Brunswick, Manitoba and Saskatchewan that don't have minimum federal standards, equivalent to $20 per tonne this year.

Conservative-leaning governments in the four provinces have disputed research showing that making polluters pay would be better for both the environment and the economy. Instead, they have argued that the federal carbon pricing regime would kill jobs and drive up the price of many products.

The Trudeau government has said it established minimum carbon pricing standards because it believes that no one should be allowed to pollute for free.

But as Canada tries to cut carbon pollution from all sectors, including buildings, in order to slow the climate crisis that’s being driven by the burning of fossil fuels, the IEA and NEB report says "current and projected energy prices — and in particular low natural gas prices – pose a particular challenge in most Canadian regions."

While the cost of renewable energy is dropping, the Trudeau government has said that regulatory systems that fail to require polluters to pay for the damage caused by their emissions can make it cheaper for companies to pollute instead.

The report said the average operating cost to run an electric heat pump, which is a clean energy technology if powered with renewable electricity, is only “marginally lower” than operating a condensing gas boiler, given low gas prices.

But it added that "phasing out natural gas use in buildings” is “unlikely” because gas lines have already been installed in dense urban areas, “and also given Canada’s abundant natural gas resources."

It suggests “ratcheting up current requirements to steer market shifts towards clean energy technologies such as electric, gas thermal and hybrid heat pumps, even in places with low natural gas prices such as Ontario and Alberta.”

Ontario previously had a program to help homes and businesses lower their energy costs that offered thousands of dollars in rebates for new insulation, replacement windows, solar installations, heat pumps and smart thermostats but the Ford government closed it last year.

The report also said a "clear strategy and guidance on future natural gas use in buildings," such as "progressively tighter energy performance requirements for gas-based equipment," would "help avoid potential lock-in."

Fossil fuels are a mug's game

Fossil fuels are a mug's game. The winning strategy is to provide energy that is cheaper than fossil fuels that can turn back the clock on global warming instead of making it run faster and faster towards mankind's demise. Negative-CO2-Emissions ocean thermal energy conversion is that energy. https://www.energycentral.com/c/ec/lies-damned-lies-and-fossil-fuel-fall...

Have you replaced your

Have you replaced your furnace with an electric heat pump? I had the possibility about 10 years back, and spent $8K on the most-efficient gas furnace rather than go the full $20K and get the heat pump. (The furnace salesman literally said, "You don't want that; I don't sell almost any heat pumps except to fanatics").

And it was just a lot of money.

That, I'm afraid, is what serious progress will take: people putting tens of thousands of dollars per family, where their rhetoric is.