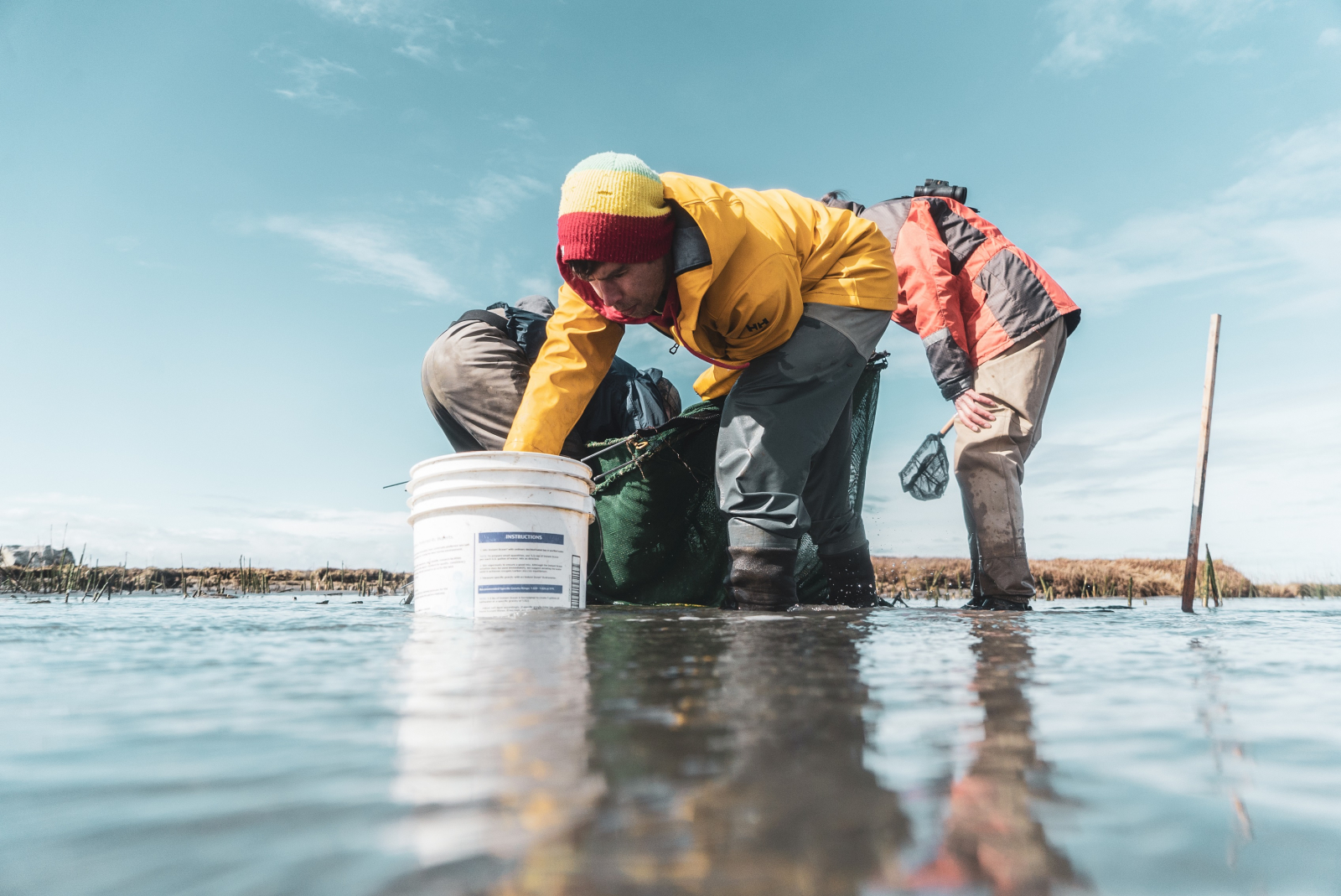 Given the ecological challenges that Fraser River salmon, including juvenile salmon, face at this point in history, now is not the time to increase pressure on their rearing grounds in the Fraser estuary by increasing the footprint of the Terminal 2 project on Roberts Bank.

The Port of Vancouver is proposing to expand the existing terminal at Deltaport, in Tsawwassen, doubling its capacity to offload containers through the creation of a 108-hectare berth in the heart of the Fraser River delta at Roberts Bank. Due to the potential for impacts to federally managed species, this project has undergone an extensive Environmental Assessment conducted by the Canadian Environmental Assessment Agency, which commenced when the initial project description was submitted in 2013.

A review of the Environmental Impact Statement by Raincoast Conservation Foundation salmon biologist Dave Scott revealed the proposed expansion poses several potential problems for juvenile Chinook and other salmon that would prefer to use the productive eelgrass beds at Roberts Bank. Primarily, the expansion increases the barrier to the natural movement of juvenile salmon created by the construction of the original four-kilometre-long causeway and terminal in 1969.

Added to this were three additional terminal pods in the early 1980s. This large structure now extends five kilometres from the shore, forming a physical barrier juvenile salmon must navigate around. To do so requires swimming through deeper and saltier water to reach the eelgrass beds to the south.

Unlike a road crossing a stream or river with a culvert or bridge to allow the flow of water and the movement of fish, the Roberts Bank causeway was never designed or modified to allow for fish passage. The proposed expansion is to be located on the northwest corner of the existing terminal. It would force juvenile salmon to swim further out and away from their preferred habitat as they transition to the more saline conditions of the outer estuary.

While the magnitude of this impact remains unknown, Raincoast salmon biologists think it likely has some level of adverse effect on juvenile Chinook choosing to move south into the Roberts Bank portion of the estuary.

Assessing the impact of the Terminal 2 expansion is hampered by the fact that there really is no data on juvenile salmon’s use of Roberts Bank prior to the construction of the terminal in 1969, or prior to the construction of the Tsawwassen ferry terminal in 1962. At that time, there was no environmental assessment act or any kind of process in place. The initial installation of the causeway has produced profound changes to the Roberts Bank ecosystem.

The discharge from the mouth of the Fraser River is now deflected away (into Georgia Strait) and so are the sediments it carries, resulting in water that is clear, salty and ideal for the growth of eelgrass. While this has resulted in the expansion of the eelgrass beds in the inter-causeway, it has meant the disconnection of what was once a fully connected and open estuary ecosystem. The eelgrass beds lying between the causeways are very productive, but the question is, can juvenile salmon get there?

Raincoast has been conducting surveys in the eelgrass for the past three years. The data show the eelgrass is where we catch the most fish, and the numbers of juvenile salmon are small in comparison to the numbers we catch in other parts of the estuary not far away. So, back to the question, can juvenile salmon get to the other side of the existing causeway at Roberts Bank? We think they may be having some trouble.

One of the points made in Raincoast’s intervener submission to the panel is that impacts to estuary migration are not the only way the proposed expansion could affect juvenile Chinook. Along with the lost habitat from creating a terminal in what is now subtidal ocean, the expansion also requires the widening of the causeway and the loss of intertidal habitats used by juvenile salmon.

There is also potential for juvenile salmon to alter their behaviour due to the increased levels of lights and noise during both construction and operation. With an increase in ships, there is also the potential for the introduction of alien invasive species brought in ship ballast water, and the introduction of contaminants from substances such as anti-fouling paints used on boat hulls.

Through all this, the port states that while the issues Raincoast has raised may result in a minor negative impact, those effects will be offset by the construction of habitat projects on site and elsewhere. However, offsetting projects often fail, and often have to be adaptively managed for years before they begin to function like natural habitats. We know Chinook and Southern Resident killer whales can’t withstand more bad years while they wait for habitats to start functioning.

When the review started in 2015, the concern was focused almost solely around potential effects on Southern Resident killer whales, both from shipping noise and the loss of Chinook salmon as their primary prey. Since 2015, the number of whales has decreased and so has the number of Chinook. In late 2018, the Committee on the Status of Endangered Wildlife in Canada (COSEWIC) released an assessment of 13 Fraser River Chinook populations, showing most are threatened or endangered. Only one, the South Thompson ocean type population, was listed as “not at risk.”

In 2018, such low numbers of adult Chinook returned to the Fraser River that Fisheries and Oceans Canada (DFO) made the decision to close 2019 fisheries until August, including no salmon harvesting for the food, social and ceremonial purposes of First Nations. The DFO has also begun to invest in habitat-restoration projects, such as the support Raincoast received through the Coastal Restoration Fund to address other physical barriers in the Fraser estuary. Phase 1 of our project to create openings in the Steveston Jetty for juvenile salmon passage took place just months ago, and we are already observing its benefits.

So at this time, when there are substantial efforts being made to recover Fraser River Chinook salmon and restore their habitat, why would we risk jeopardizing recovery efforts? After being involved with this process for the past four years, we hope the review panel can see this is not the time to put further stress on the vitally important Fraser River ecosystem.

Chris Genovali is executive director of the Raincoast Conservation Foundation, based in Sidney, B.C.

Does no one have a map or

Does no one have a map or diagram to show this? We're not all familiar with the area.