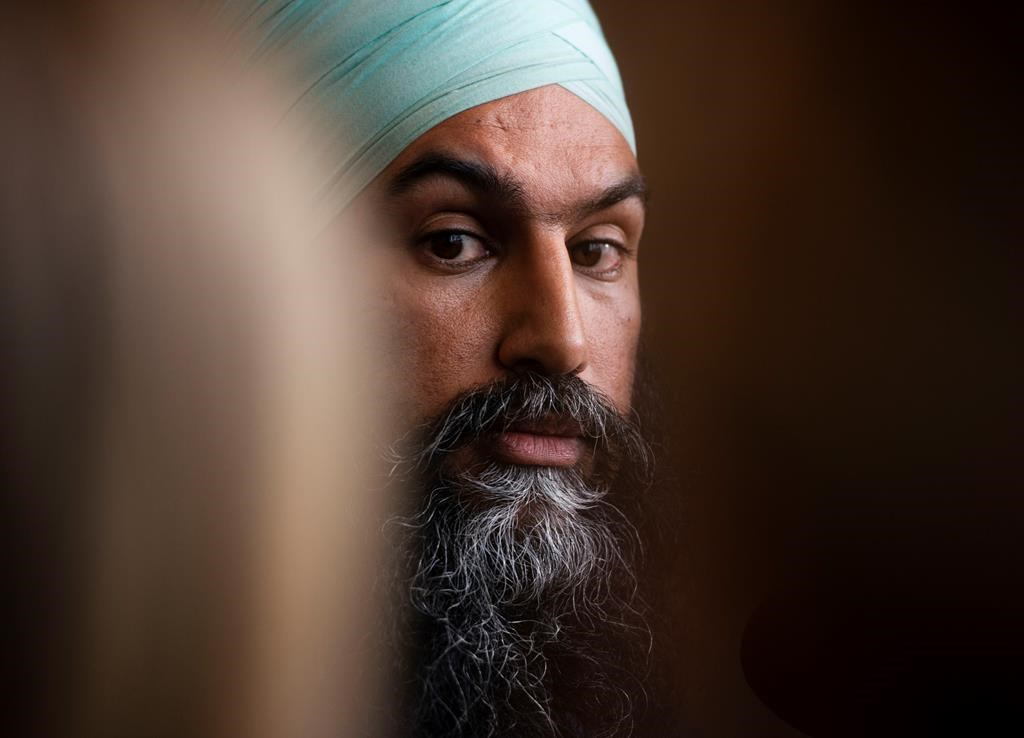 NDP leader Jagmeet Singh listens to a question as he holds a press conference following a meeting with his caucus in Ottawa on Wednesday, Oct. 30, 2019. Photo by The Canadian Press/Sean Kilpatrick
Previous story
Next story

The NDP's first priority for the new Parliament will be challenging the Liberals to support the immediate creation of a national, universal pharmacare program, Leader Jagmeet Singh said Wednesday.

New Democrats met in Ottawa to regroup after the caucus was reduced to 24 seats from the 39 it held before the Oct. 21 vote. Singh emerged from a day-long meeting surrounded by most of his MPs, who cheered and clapped as he spoke to reporters about what he wants to do over the next few months.

Singh is testing the waters of his party's influence in a minority government by pushing the Liberals to go further and faster on pharmacare than they have promised to do. Whenever Parliament resumes, Singh said the NDP will introduce a private member's bill to create a national pharmacare program so Canadians across the country can get prescription drugs through provincial health plans the same way they visit doctors.

An advisory panel on pharmacare established by the Liberals during the last Parliament recommended a universal system with a national list of drugs that would be paid for by the public purse. Prime Minister Justin Trudeau promised to work towards it but put no timeline on full implementation. The Liberal platform promised a $6-billion increase to provincial health transfers over the next five years to help pay for system improvements including pharmacare.

Last spring, the Liberals called Singh's pharmacare proposals unrealistic. But that was when the Liberals had a majority government.

The Trudeau Liberals won 157 seats in the election on Oct. 21, 13 shy of a majority. The NDP, with 24 seats, can help the Liberals get legislation passed, but so can the Bloc Quebecois, which has 32 seats.

However, Singh argued that if Trudeau wants to get progressive legislation like pharmacare going, the NDP is the only party that will support him on that.

He is also pushing Trudeau to drop the legal challenge of a recent Canadian Human Rights Tribunal ruling ordering the government to pay $40,000 in compensation to every Indigenous child who was wrongly placed in foster care since 2007, as well as to their parents or grandparents. Trudeau said during the campaign he believes compensation is warranted but that the time frame given by the tribunal was too tight because of the election.

The hearing for judicial review of the tribunal's ruling is scheduled for late November.

Much like Conservative Leader Andrew Scheer, Singh will face a leadership review at the next party convention. But unlike Scheer, the knives have not been sharpened against Singh despite the party's electoral losses.

Several of the 12 defeated New Democrat MPs attended Wednesday's meeting, but none laid the blame for their defeat at the feet of their leader. Tracey Ramsey, who lost her southwestern Ontario seat to the Conservatives, said she thinks she lost because people in her region wanted to get rid of Trudeau and felt voting Conservative was the best way to do that.

Conversely, Quebec MP Pierre-Luc Dusseault, who lost to the Liberals, said "fear of the Conservatives" in Quebec hurt his fortunes.

Matt Dube, one of the young McGill University students who found themselves unexpectedly elected during the NDP's surge in Quebec in 2011, said it maybe took Singh too long to introduce himself to Canadians. But he thinks Singh did that in the campaign and now deserves a second chance to see what he can do in another election.

Dube did, however, say he was disappointed that Singh chose to dance and celebrate on election night, when a dozen NDP MPs went down to defeat.

He said the party needs to be "careful with the self-congratulations."

Anne McGrath, a former party president and one-time chief of staff to Jack Layton, said losing MPs is always hard but the outcome was much better than anticipated at the outset of the campaign, when the financially-strapped party had trouble nominating candidates and was polling in the single digits.

"You can't talk about it as a victory when you lose several seats but when we look at the situation we were in going into the campaign it was a real doomsday scenario," she said.

McGrath is leading the party's transition period and said the people around the table Wednesday were spending time to reflect on what went wrong, what went right and what kind of caucus they want to be in a minority Parliament. McGrath said the final weeks of the campaign found a lot of momentum for Singh, and the money started to roll in.

She is hopeful that will continue now and put the NDP in a much better place whenever the next election is called.

A national pharmacare program requires participation by every province. Trudeau's first act should be to put Singh in charge of a commission to negotiate pharmacare agreements with the provinces.