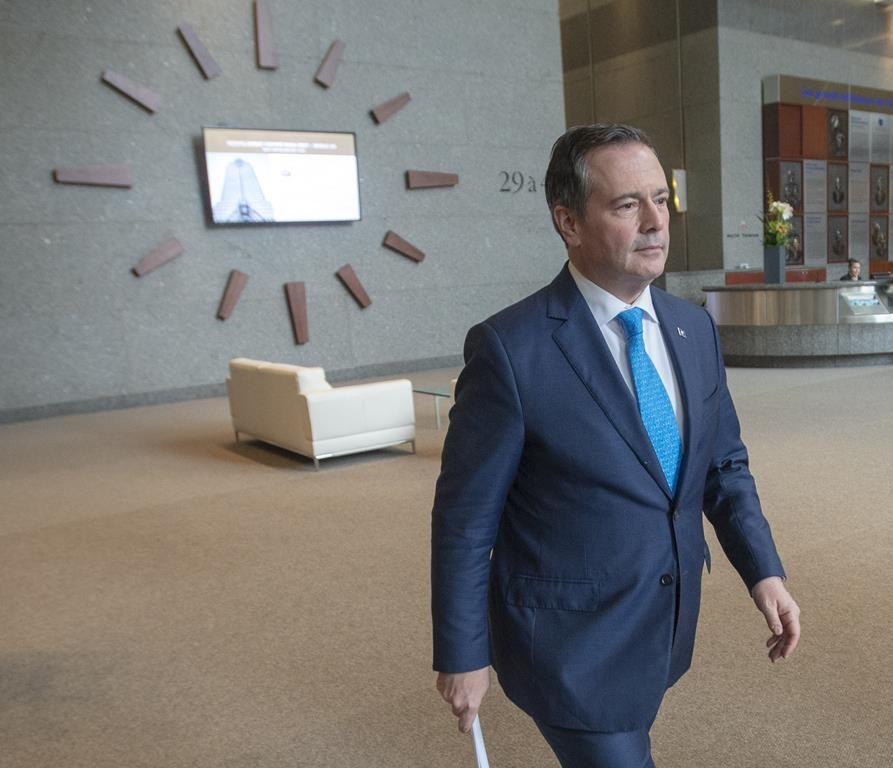 Alberta Premier Jason Kenney leaves after speaking to the media on Tuesday, February 4, 2020 in Montreal. File photo by The Canadian Press/Ryan Remiorz
Previous story
Next story

Demonstrations have blocked railways, ports and bridges across the country in solidarity with hereditary chiefs fighting the Coastal GasLink project that crosses the traditional territory of the Wet'suwet'en First Nation.

Kenney described the protests at a Tuesday news conference as "ecocolonialism" from southern Canadians "projecting their own fringe political agenda."

He said the protests are not about Indigenous rights because all 20 elected First Nations band councils along the pipeline route have signed benefit agreements with Coastal GasLink.

The Wet'suwet'en hereditary chiefs, however, assert title to a 22,000-square-kilometre traditional territory. They say the band council established by the Indian Act only has authority over reserve lands.

Anyone demonstrating because of the pipeline's climate impact is hypocritical, because the line would enable countries such as China to burn liquefied natural gas from Canada instead of dirtier coal, Kenney added.

"This is not about Indigenous people. It's not about carbon emissions. It's about a hard-left ideology that is, frankly, opposed to the entire modern industrial economy. It's about time that our police services demonstrated that this is a country that respects the rule of law," the premier said.

"Allowing people to completely destabilize the lives of tens of thousands of people, costing all of us untold costs in our economy ... in opposition to the express democratic wishes of First Nations is outrageous and it has to end."

Kenney has also argued that Indigenous rights are not a valid reason to oppose the proposed Teck Frontier oilsands mine in northeastern Alberta. He reiterated in a letter to Prime Minister Justin Trudeau last week that 14 affected First Nations and Metis communities have signed participation agreements.

The chief of one of those communities wrote in a letter to federal Environment Minister Jonathan Wilkinson that Alberta has so far done little to accommodate his First Nation's concerns over environmental monitoring and wildlife conservation.

"While both Teck and Canada are dealing with us in good faith, we feel that Alberta has not taken its duty to consult seriously," Athabasca Chipewyan Chief Allan Adam wrote last week.

Alberta Environment Minister Jason Nixon said Tuesday that the United Conservative government has met with the First Nation almost a dozen times in recent months and continues to work closely with it.

He said concerns over a bison herd in the region are Ottawa's responsibility and Alberta has already created a large wildland park for caribou.

"Chief Adam primarily seems to want to discuss money. And while I understand that it is his responsibility to drive the best deal he can for his constituents and for his band, it is also our responsibility to make sure that we work on behalf of Alberta taxpayers and move forward in a productive way for that portion of the province," Nixon said.

The federal cabinet has until the end of the month to make its decision on the $20.6-billion oilsands mine.

Kenney said in his letter to Trudeau that a rejection would have devastating consequences and would stoke western alienation.

The project is expected to emit about four million tonnes of carbon a year and operate for 40 years. Kenney said Teck has made great strides to reduce emissions per barrel.

Kenney said that in a world expected to need oil for decades — "not the fantasy land where we fuel the modern economy with pixie dust and unicorn farts" — it's better to have a "progressive" company such as Vancouver-based Teck Resources provide it than "OPEC dictatorships."

“Allowing people to completely destabilize the lives of tens of thousands of people, costing all of us untold costs in our economy ... in opposition to the express democratic wishes of First Nations is outrageous and it has to end."

To those people who are hot under the collar about roads, bridges, trains and buildings occupied by the Wet’suwet’en land defenders and their allies:

Hmm, well it seems to me that the Wet’suwet’en rights to go about their daily lives has been shattered at the end of guns.

And all Indigenous people’s who’ve been herded up and moved to reservations; requirement of permits to leave the reserves; no right to legal representation for years; had their children stolen, abused and sometimes murdered; gone without suitable homes and drinking water; endured years of broken promises; suffered the effects of resource extraction, loss of hunting and food gathering areas and declines of food sources; been subjected to racism and derision in their own lands; and so on.
Gee, compared to these past few hundred years, a few hours of blocked trains, buildings, roads, bridges, etc. seems like pretty minor incidents.

Wonder how all the complainers would have liked a few hundred YEARS of “inconvenience”?

What an embarrassing and

What an embarrassing and shameful level of ignorance for an elected official to possess. Mr. Kenney, just because you are incapable of understanding climate science, or reading up on the ready availability of renewable energy, electric vehicles, energy-efficient building products and methods, and the benefits of investments in active and mass transit, does not justify you demeaning the many millions of individuals who are increasingly concerned for the future of the planet's biodiversity, climate stability, fate of industries other than the fossil fuel industry, or their own children. Just because you are only capable of understanding the manipulation of the law to turn our nation's policing force into a corporate-captured assault team, on unceded indigenous lands and peoples, does not justify your thoughtless dismissal of the rights or concerns of the citizen groups you obviously care nothing about.

I would suggest the only unicorn farts that may exist are filling the space between your ears. Certainly, an intelligent, science-informed, and respectful statement issuing from your mouth seems about as fanciful a notion.

Can you really, truly, inexplicably believe that you are more poised to make predictions and interpretations about climate science and stability than the thousands of peer-reviewed, published scientists who have invested years and years of their lives, in university undergraduate and graduate studies and successful respected careers? In science, people carefully declare their potential sources of conflict of interest, in every publication and at every meeting. Their entire work is informed by evidence, investigation, and peer review. Please, Mr Kenney, fill us all in on the explicit details of your science background, your university and post-graduate successes, your peer-reviewed evidence-based publishing record, and your lack of personal bias in the conduct of your decision-making. We're all ears.