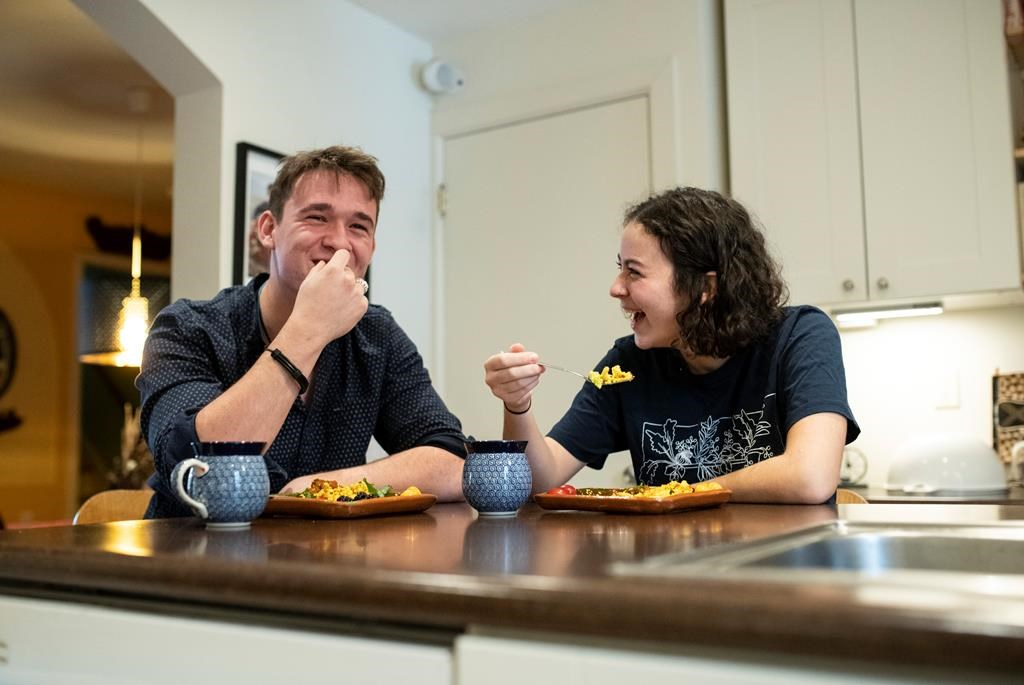 Nelson Oser-Small, 17, and Mia Kelly, 17, eat tofu scramble they made for breakfast at the Kelly family home in Gatineau, Que., on Saturday, Feb. 15, 2020. File photo by The Canadian Press/Justin Tang
Previous story
Next story

"After that, climate change was really on my mind a lot," she said. "And then I realized that switching to a vegetarian or vegan diet was the biggest thing I could do as an individual."

"Honestly it's like a trend now to become vegan or vegetarian," he said. "A lot of my friends are taking a bigger interest in climate change and they know that eating less meat will help."

Both teens say being vegetarian has been easy so far.

"I don't really miss meat all that much. But the other day was the Super Bowl and I really missed having chicken wings to watch the game. I guess I also missed the turkey and stuffing at Christmas dinner," Kelly said. "It's more like tradition, than the actual meat itself."

According to a 2018 Dalhousie University study, people under the age of 35 are three times more likely to consider themselves vegetarian or vegan than people 49 or older. This translates to almost two out of every three vegans in Canada being millennials or from Generation Z. Similar results are found in other studies conducted in Canada and the United States.

"In 2018 we estimated that 6.4 million Canadians already follow a diet that restricts meat partially or completely," notes the principal investigator of the study Sylvain Charlebois from the Agri-Food Analytics Lab. "But now we've already revised this number to 10.2 million. Things are changing really fast, faster than ever really."

And Charlebois says these numbers could continue to grow as young people end up passing their diets down to their own kids. He explains that this would then change expectations for greenhouse gas emissions, health indicators such as heart disease, as well as the food industry itself.

Eilish recently asked her millions of Instagram followers to take responsibility for climate change, including by giving up meat, dairy, and plastic.

Thunberg says her key efforts to combat climate change include a vegan diet, not flying, and no longer buying unnecessary new things.

"In the last few years there's been a dramatic increase in the kids who go vegan, with climate change rapidly gaining speed as the reason they give," says Susan Hargreaves, 60, the Toronto native who runs Animal Hero Kids, a Florida animal rights organization.

"Kids are now way more aware of the link between the climate crisis and animal farming."

"It's not only for the animals but for our health and for climate change," said 15-year-old vegan Kingston Walters, one of the Animal Hero Kids from Vancouver. "Being vegan is the best way to save our planet. It's not going to be here anymore if we all just stand back and watch."

About 15 per cent of global greenhouse gas emissions are related to livestock, according to the UN Food and Agriculture Organization. And last year's special report on climate change and land by the Intergovernmental Panel on Climate Change cited reduced meat consumption and shifts to plant-based diets as opportunities for mitigating climate change.

The Canadian red meat industry was worth $21.1 billion in 2018. But Canadians have decreased their beef and pork consumption over the last two decades, looking to other protein sources including chickpeas and other legumes, algae, or fungal protein to mimic meat and poultry products.

"Buying food is like voting," said Charlebois. "You're basically telling the food industry that this is what matters to me … with health and environment as two of the top concerns."

Companies such as Maple Leaf and Cargill are embracing meatless alternatives, with more vegan protein options available in grocery stores.

"The important thing is to make sure kids get the nutrients and energy they need for growth and development," said Brooke Bulloch, a spokesperson for Dietitians of Canada.

"Of course, mom and dad are saying 'oh my gosh, how do we meet their protein needs?'" Bulloch said, noting that she has seen more families and youth looking for advice about plant-based diets over the last year.

"But the evidence really points to protein not at all being an issue with well-planned plant-based diets."

The Canadian Paediatric Society says a well-balanced vegetarian diet can provide for the needs of children and adolescents. But it cautions that strict vegan diets may need vitamin and mineral supplements, such as calcium fortified food.

"I think a lot of children and families are just sort of removing things out of their diet, but often not thinking about what should be added back in to prevent micronutrient deficiency," said Nita Sharda a Winnipeg dietitian, who points to the importance of proper planning.

But Nelson Oser-Small's mother, Michelle Oser, is not worried about her son's vegetarian conversion.

"I've done my research," she said. "As we all know, you get protein and iron from lot of places … and if you're really worried there's always iron and vitamin supplements."

"He's doing it for good reasons, and so hopefully he can stick to it."

— Katherine Monahan is a freelance journalist and a climate change policy researcher in Ottawa.

This is not a new idea. In

This is not a new idea. In the late 60s and early 70s vegetarianism was encouraged by people who wanted to be able to feed the ever increasing population of earth. People were encouraged to have either small families or none at all. There was a book popular among well educated young adults called, I believe, Diet for a Small Planet that carried philosophical ideas and recipes. This wasn’t exactly for climate change but the basic principle was the same: save earth.

It's neither a new idea, nor

It's neither a new idea, nor one having much success. The article skips over the most important statistic: that vegetarianism is not increasing. Not in the last few years, not over the last 20 or 30:

It was 6% vegetarians in 1999 and 5% in a survey two years back. It goes up and down a bit from 5% to 6% in various surveys. The story they missed is the drop in average meat consumption per person, NOT because of increased vegetarianism, but because of decreased meat choices among meat eaters; Canada has gone down from about 100kg/person/year to under 90 since the peak around 2002:
https://www.bbc.com/news/health-47057341

...but we are utterly overmatched by the huge increase in meat consumption in Brazil and especially giant China, which are eating 10X the meat per person today that they were in 1970. Brazil is now more meat/person than Canada, despite relative poverty, and while China is a mere 60kg/person, that has to be multiplied by over a billion to some 70 million tonnes per year.

Climate is a global story; little vignettes about how tiny Canada is saving its coffee grounds for mulch are irrelevant in the global context.

If you think meat is the story, it's important to look at the coal consumption graph:

I wonder how many of these

I wonder how many of these people who are giving up meat are also dog owners. The University of California, The Guardian, The Independent and other very reputable newspapers have all reported that dogs have massive carbon and methane footprints that are contributing to global warming. A UCLA article published on August 2, 2017 stated that, “A UCLA study has found that dogs and cats are responsible for 25 to 30 percent of the environmental impact of meat consumption in the United States.” The article went on to state that, “ All that meat has important consequences. UCLA geography professor Gregory Okin calculated that meat-eating by dogs and cats creates the equivalent of about 64 million tons of carbon dioxide a year, which has about the same climate impact as a year’s worth of driving from 13.6 million cars.”
http://newsroom.ucla.edu/releases/the-truth-about-cats-and-dogs-environm...

Meat only contributes to

Meat only contributes to climate change because capitalist farmers grow grain crops to fatten up the animals prior to slaughter. If animals could graze on marginal land, eating mostly grass and drinking mostly dew, then they would contribute virtually no greenhouse gases, and would actually improve the land. One important component of our battle against climate change is the development of licensed, regulated hunting of wild and feral animals, and expansion of their habitat.