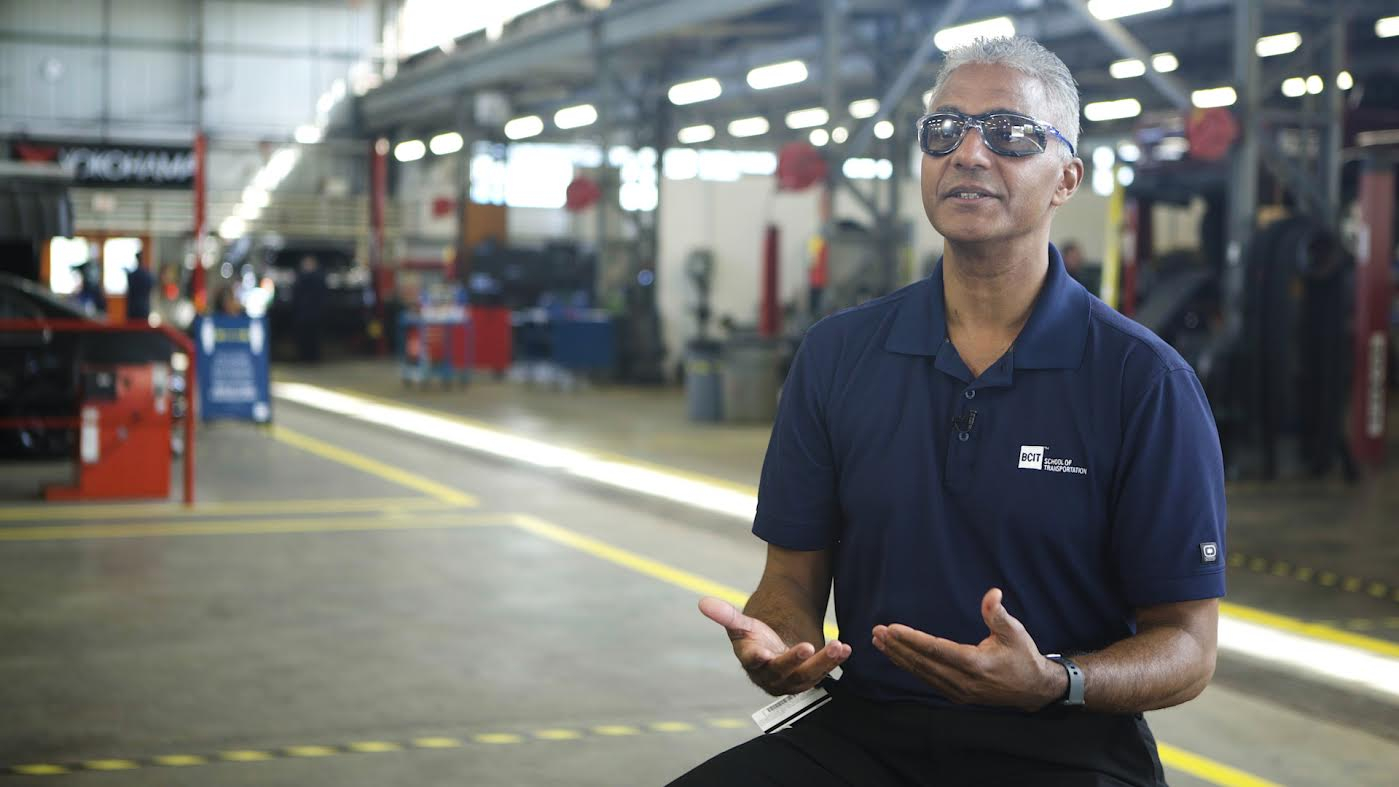 Mubasher Faruki, associate dean of automotive at BCIT, says demand is growing for automotive technicians to be trained to work on electric vehicles. Photo by BCIT
Previous story
Next story

Canadians are being encouraged to drive electric vehicles, but can they trust their local mechanic to know what to do when they need them repaired?

In fact, demand is growing for automotive technicians to be trained to work on electric vehicles (EVs), according to an associate dean at the British Columbia Institute of Technology (BCIT).

The demand is coming in particular from independent shops outside of dealerships that don’t have the luxury of being able to get training from manufacturers, said Mubasher Faruki, associate dean of automotive at BCIT’s School of Transportation.

“If you talk to anybody in the industry, I think there’s definitely a growing need for technicians to be trained in this area,” Faruki said in an interview Thursday.

BCIT has launched its own EV maintenance training program, with support from B.C.'s climate plan, CleanBC. The provincial government estimates there are now more than 30,000 EVs on the road in the province, and expects to see more interest in mechanics who can service them.

This week, a coalition of environmental and conservation groups recommended that the federal government provide funding for a national version of BCIT's program.

Faruki said he was excited to hear the recommendation since he feels this kind of funding helps free up institutions to allocate faculty to be trained so they can then train others.

EV maintenance and repairs will also look different around Canada, he noted, given that the country’s varying weather means different operating conditions in different regions, so national funding can help develop best practices.

Demand is growing for mechanics who can work on electric vehicles. The @bcit has launched its own EV maintenance training program. Now, Canada's Green Budget Coalition wants to see the federal government take that program and make it national.

“It does help to bring it to a national perspective because it allows technicians entering into the field to really understand the bigger picture of how these vehicles operate and what’s the best way to keep them maintained and running,” said Faruki.

“If you bring it to a national level, then I think everybody can stay in sync with what needs to be done, and you’d get a lot more collaboration on what would be the best way to proceed and what this all might look like.”

EVs hold the promise of dramatically lowering Canada’s carbon pollution profile, especially in a country where 82 per cent of the electricity grid is already non-emitting.

The transport sector now makes up 30 per cent of national emissions, according to federal estimates, with most of that related to road transportation, and transport emissions are climbing as Canadians drive more and there are more vehicles on the road.

“We’ve got to get a handle on vehicle emissions if we’re going to bend our carbon curve and exceed those 2030 targets — there’s just no way around it,” said Lisa Gue, senior researcher and analyst at the David Suzuki Foundation, who worked with the coalition and is an expert in zero-emission vehicles and other environmental health policy issues.

Gue said the coalition decided to recommend nationally funded training as a way to support the transition of workers who are employed in the conventional automotive value chain.

“Supporting employment related to zero-emission vehicle sales not only helps future owners, it also supports the whole transition,” she said.

The Trudeau government has supported zero-emission vehicles through several initiatives, including a $1.5-billion announcement on Oct. 1 for charging infrastructure and zero-emission buses, as well as a $295-million contribution on Oct. 8 to help produce EVs at Ford’s assembly plant in Oakville, Ont.

In the throne speech, the government said it would aim to make zero-emission vehicles “more affordable” and launch a new fund for attracting zero-emission products. It has also set a target for 10 per cent of all new light-duty vehicles sold in Canada to be zero-emission by 2025, rising to 100 per cent by 2040.

But those targets are not mandated federally as they are in British Columbia and Quebec, where provincial sales requirements demand a percentage of light-duty vehicle sales to be zero-emission models.

“Electric vehicle sales are still just hovering around three per cent of total vehicle sales in Canada,” said Gue. “Arguably, that transition needs to happen faster, but we’re so far from even that 10 per cent target, it’s clear that we need to do more — we really need to ramp up action in this area.”

In addition, it recommended “more favourable tax treatment” for EV manufacturing and a $250-million fund over five years to develop standards, incentives and policies for sustainable battery recycling and research in EV waste processing.

"Fixing" electric vehicles is not just acquiring a whole new set of skills. It is inherently more dangerous to mechanics than the internal combustion engine. Even when "turned off" electric battery driven vehicles have the potential to be explosive. Anyone who looks under the hood or in the battery compartment is confronted with a maze of wires and unknown components that have no familiarity at all. On top of which these vehicles are made possible by highly toxic and rare metals/other substances, for which no safe disposal, let alone recycling has yet been devised.

Replacing fossil fuel is not as easy as buying a battery driven car.

Oh, come on. Like there's nothing toxic in an internal combustion engine . . . which, lest we forget, is powered by triggering multiple small explosions per second in a highly flammable substance. The difference is that a lot of the toxic substances in an ICE car are liquid and routinely leak all over the place.
Sure, EVs are unfamiliar so people need to be trained. But let's not be melodramatic about it.

That is not true at all and

That is not true at all and amounts to spreading FUD (fear, uncertainty and doubt, a popular right wing strategy). 1. An ICE vehicle has many cables, hoses, belts and plugs under its hood that are not at all obvious. 2. Electricians deal with powerful currents all the time. Do you think mechanics cannot learn that? 3. There are many toxic chemicals in gas, oil, and lubricants, but far fewer in batteries (which is what your comment on 'toxic and rare metals' seems to imply). You are using old and long debunked talking points.

Bearings, brakes, alignment, tires, lights, windows, doors and more are common to most gas, diesel, hybrid and electric vehicles. Even batteries are common, although the electric vehicle battery is leagues bigger than the regular batteries. Dashboards of all vehicles including gas, diesel and electric are now mostly digital, including many that have changed to have the pedals electrically linked to the engine, brakes and steering (fly by wire).

This is not to say that electric vehicles do not have unique systems that require unique trouble shooting skills and equipment. When carburetors were replaced by fuel injection systems and ignition systems went electronic, similar apprehensions were commonly voiced.