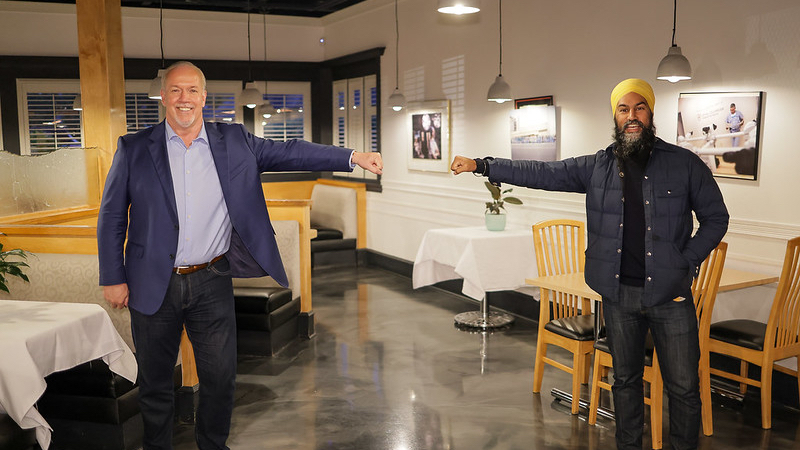 Premier John Horgan meets with Jagmeet Singh, leader of the federal NDP, in Vancouver ahead of the B.C. election last month. Photo by BC NDP
Previous story
Next story

The federal government’s upcoming fall fiscal update will look like no other in Canadian history. With an already record $343-billion deficit and significant promises still to fulfil from the Liberals’ September throne speech, the cost of COVID-19 is mounting.

The growing deficit is not cause for alarm, nor austerity. Record-low lending rates make this an ideal time for governments to help individuals and businesses survive the pandemic and recover. The International Monetary Fund recently recommended advanced economies like Canada seize this moment and strengthen public investments to bolster confidence and economic output. Investments in areas such as accessible child care and green jobs creation will help the recovery and lay the foundation for a more sustainable and inclusive economy post-crisis.

But the federal government will eventually have to deal with the pandemic’s unprecedented economic cost. By making progressive changes to the tax system now, the Liberals can raise much-needed revenues while fulfilling the commitment in the throne speech to find new ways of taxing extreme inequality.

A report by Canada’s parliamentary budget officer (PBO) found the top one per cent of Canadians own more than a quarter of all net wealth in the country. The pandemic has worsened this wealth gap. While many households struggled under COVID-19, Canada’s billionaires increased their wealth by $37 billion.

The federal government should introduce new taxes targeting extreme wealth concentration and use the revenues to strengthen social safety nets and stimulate the economy. Fortunately, there are many tax measures that can accomplish both goals without raising taxes on average Canadians or stifling economic growth. Here are some of them:

Annual net wealth tax: Canada is the only G7 country without a wealth, inheritance or estate tax. This has allowed extreme wealth to accumulate at the top. Canada’s 100 billionaires own as much wealth as the 15 million least-wealthy Canadians.

The NDP has proposed a wealth tax of one per cent on households with more than $20 million, which the PBO estimated could raise nearly $70 billion over the next decade, an average of $7 billion annually. While the NDP should be commended for the proposal, it could go much further. A modestly graduated wealth tax that climbs from one per cent on wealth over $10 million, two per cent on over $100 million and three per cent on over $1 billion could generate about three times that amount. Multiple polls have found strong majority support for a wealth tax in Canada across all age groups and political lines.

Tax capital income like other income: Ordinary Canadians are taxed on the full amount of their income from employment. Meanwhile, those with income from capital, including stock options, are only taxed on half the increased value of their investment income. This overwhelmingly benefits the top incomes and the wealthiest, costing the federal government tens of billions annually. Preferential tax rates on individual and corporate gains alone cost the federal government nearly $22 billion a year. By taxing investment income just like regular income, the government could raise billions in additional revenue while restoring greater equality to the tax system.

Tackle tax havens: The expansion of tax havens has further enabled Canada’s richest individuals and largest corporations to hoard more of their wealth offshore, resulting in lost revenues for federal and provincial governments. Use of tax havens costs Canada as much as $25 billion every year, according to the PBO. While many smaller businesses are struggling just to survive under COVID-19, large corporations such as Loblaw and mining giant Cameco are embroiled in billion-dollar court cases with the Canada Revenue Agency over their use of tax havens.

The federal government can also reduce these losses by requiring multinational corporations to publicly report taxes paid in each country, introducing a public registry of beneficial owners, supporting reforms to international corporate tax rules and strengthening laws at home, including harsher penalties for those who engage in and facilitate offshore tax dodging.

By making progressive changes to the tax system now, the Liberals can raise much-needed revenues while fulfilling the commitment in the throne speech to find new ways of taxing extreme inequality, writes @ErikaBeau.

These are just a few fair tax measures the federal government should introduce that would reduce inequalities, help pay for the costs of the crisis and rebuild a better economy in the recovery.

Erika Beauchesne is the communications co-ordinator with Canadians for Tax Fairness, a non-profit organization that advocates for progressive taxes to reduce inequality and strengthen the economy.

Taxing the ultra-rich would

Taxing the ultra-rich would also go a long way to addressing the climate heating challenge we face.

'Jagmeet Singh was up to lead

'Jagmeet Singh was up to lead for the NDP, and in French, he demanded a tax on “excessive profits” companies made in the pandemic, to which Trudeau recited his worn talking point that they raised the taxes on the one percent when they formed government and the NDP voted against it. Singh changed to English to name poor workers to put faces on the same question, and Trudeau responded that they recognised front-line workers and that was why they stepped up to supports for businesses, before repeating his line about raising taxes.' Dale Smith, Press Gallery Journalist, Routine Proceedings October 8, 2020 https://www.routineproceedings.com/2020/10/08/qp-the-bloc-let-their-moti...