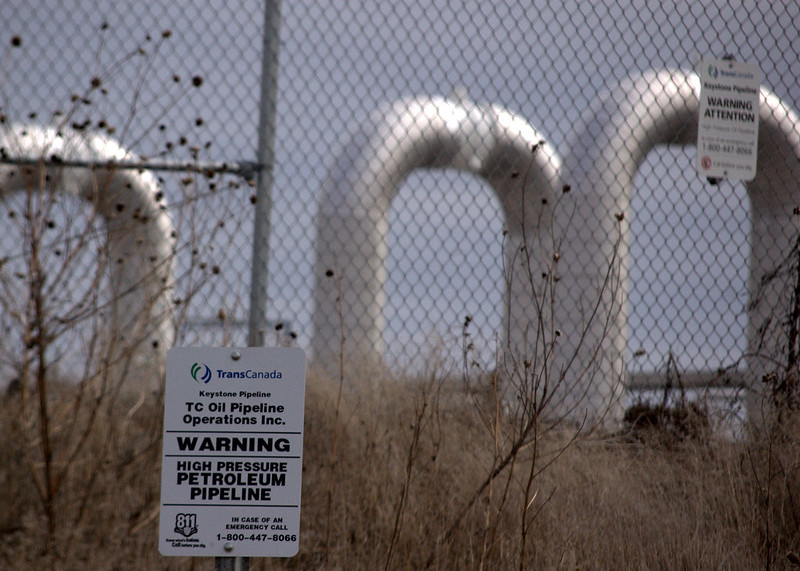 A warning sign on a section of the Keystone XL pipeline in rural Nebraska in 2013. U.S. president-elect Joe Biden has said he’ll rescind the permits for the project. Photo by Shannon Ramos/Flickr (CC BY 2.0)
Previous story
Next story

It was our current prime minister’s father, former prime minister Pierre Trudeau, who once described sharing a border with America as akin to sleeping with an elephant. “No matter how friendly and even-tempered is the beast,” he said, “one is affected by every twitch and grunt.”

And while the simile broadly summarizes Canada’s long-standing relationship with its closest trading partner and ally, it proves doubly true at times. Such as with climate action and the future of our economy.

Because it’s not just the scope of president-elect Joe Biden’s climate ambition that matters — but, much like the elephant, the sheer scale of it, too.

Case in point: Biden says he aims to electrify all 500,000 school buses in the United States. While it’s impossible to predict private-sector winners at this early stage, one can’t help but feel a twinge of excitement for Quebec-based Lion Electric, which manufactures and delivers electric school buses across North America, especially to climate-forward California. The size of the opportunity is enormous.

And so is the size of the competitive threat.

For Canada’s clean energy sector and a myriad of exporters, America’s impending shift to a cleaner economy is a double-edged sword. It means not only increased opportunity, but increased competition (Lion Electric, for example, is considering building one of its manufacturing plants in the U.S. rather than Canada).

We don’t want the elephant rolling onto our side of the bed.

Biden’s plans to invest in clean energy and innovation, scale up clean-tech deployment, commit the U.S. to net-zero emissions by 2050 and require public companies to disclose climate risk will, together and along with other measures, define a different kind of relationship with Canada: One in which the goods and services we export need to be cleaner, especially if we want to demonstrate that Canada is a worthy partner in the face of “Buy American” policies giving preference to U.S.-based companies.

Which is why Canada wants to be inside — rather than outside — the U.S. clean energy market. Quebec, which already shares a carbon market with California and sells electricity to New England, provides some precedent (B.C. and Manitoba similarly sell power to the U.S.).

America is by far our largest trading partner, and while there are many made-in-Canada success stories deserving of praise, a number of clean energy jobs — like building electric vehicles for Ford and Chrysler in Ontario — will be brought to us by American companies, whether they’re setting up shop here or simply buying our wares.

"Building a sustainable economy, together, needs to be a conversation that continues well into the future," write Merran Smith and Sarah Petrevan of @cleanenergycan. #cdnpoli #cleanenergy

Already, much attention is being paid to the Keystone XL pipeline, a project Biden has said he’ll rescind the permits for. Canada should listen to our southern neighbour when they tell us what they want more of (clean energy) and what they want less of (pipelines and fossil fuels).

We have a fire under us now — and not just the increasingly frequent literal ones. This isn’t merely an economic opportunity, but a downright imperative. Our next biggest trading partner, the European Union, has similarly increased the scope of its climate ambition in 2020, pouring billions into a cleaner recovery, while Asia continues to be a key market for many Canadian clean-tech companies (Japan and South Korea have 2050 net-zero goals, China a 2060 one).

Prime Minister Justin Trudeau and Biden had their first call on Monday following the president-elect’s historic victory, and the headlines told us that combating climate change was a topic they chose to discuss.

Building a sustainable economy, together, needs to be a conversation that continues well into the future, as we once again find common ground and shared prosperity with our closest neighbour.

Merran Smith is the executive director and Sarah Petrevan is the policy director of Clean Energy Canada, a program at Simon Fraser University’s Centre for Dialogue.

The stars do seem to be

The stars do seem to be aligned for a shift to green, especially considering that our two most important allies and trading blocs are the US and the EU, as iterated above. But one can be forgiven for wondering how far Canada is willing to go when it has so quickly handed over mountains of public money / debt for fossil fuel infrastructure and subsidies, no questions asked. Further, the feds allow themselves more than the occasional sop to Western petroleum interests, and regularly appropriate the terms "economic" or "energy" for nothing more than the narrow scope of oil and gas.